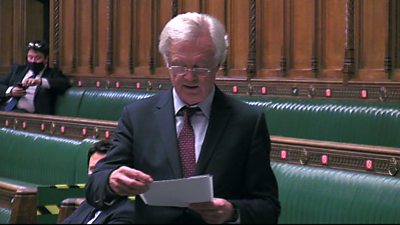 He told a House of Commons debate that he had evidence showing that key government officials had earlier knowledge of harassment claims made about the former first minister.

Mr Davis said: “I have it on good authority that there exists from the 6th February 2018 an exchange of messages between civils servants, Judith McKinnon and Barbara Allison, suggesting that the first ministers chief of staff is interfering in the complaints process against Alex Salmond. The investigating officer complained Liz interference v bad. I assume that means very bad. If true, this suggests that the chief of staff had knowledge of the Salmond case in February [2018] and not in April.” Rand Paul asks if YouTube will ‘kiss my ….’ and apologize after CDC revises mask guidance

President Joe Biden will join the first-ever meeting of the leaders of Japan, India and Australia on Friday as he seeks greater cooperation with U.S. allies to counter China’s strength in the region
Read more

The US National Space Council Is Back and Focused...

Twin elephants were born for the first time in nearly 80 years at the Pinnawala Elephant Orphanage in Sri Lanka, according to wildlife authorities.
Read more

These are the young activists taking the fight against...

Young people are taking climate action into their own hands as distrust over lawmakers' ability to tackle global warming continues to grow.
Read more

Jefferies Financial Group Inc. is grateful for toiling junior bankers -- and the Wall Street firm is showing its appreciation with a selection of coveted fitness perks including a Peloton Interactive Inc. bike and Apple Inc. products.
Read more

The relentless ambition of Mike Pompeo

Donald Trump is still publicly undecided about whether he will run for president again in 2024.
Read more

Marco Silva wants Fulham to be less reliant on...

Fulham head coach Marco Silva wants the rest of his squad to be less reliant on the goals of Aleksandar Mitrovic.
Read more

A bug in Klarna's mobile banking app briefly made it possible for users to view the accounts and stored information of other customers.
Read more

The Kansas City Chiefs have agreed to a $5 million contract for next season with three-time Pro Bowler Kyle Long.
Read more

The White House argues now is the time to spend big.
Read more

Thousands flee their homes in the Democratic Republic of Congo after a volcano erupts near Goma city.
Read more

Manchester United will allow its fans to buy shares in the club, in the latest repercussion of a failed move by soccer giants to form a breakaway Super League in Europe.
Read more

Daniel Craig thought he had wrapped up his tenure as James Bond with "Spectre", but the actor says his final fifth outing as the British secret agent in "No Time To Die" allowed him to fully complete his 007 journey.
Read more

Ponferradina: The pilgrimage that changed one football obsessive’s life

One fan's pilgrimage along the Camino de Santiago led to a footballing obsession that completely changed and shaped his life.
Read more

Canada announced on Tuesday two agreements totaling $31.5 billion (40 billion Canadian dollars) to compensate First Nations children who were taken from their families and put into the child welfare system and to reform the system that removed them and depriv…
Read more

Threat actors are already looking for vCenter Servers that haven’t yet been patched after yesterday’s vulnerability disclosure.
Read more

Nauka’s errant firings were likely the result of human error—and they raise concerns about the future of the country’s space program and its partnership with NASA.
Read more

Marcus Semien and Bo Bichette hit consecutive first-inning homers, Randal Grichuk had a two-run double in a five-run second and the Toronto Blue Jays hung on to beat the injury-depleted Philadelphia Phillies 10-8 on Sunday.
Read more

Lancaster University spiking victim felt she was not taken...

Some Chinese regions could face tight gas supplies during peak demand periods this winter, with overall supply and demand finely balanced, but coal supply will be assured, the state planner said on Tuesday.
Read more

Republican Gov. Kristi Noem of South Dakota is cutting ties with Corey Lewandowski, one of her top political advisers, in the wake of sexual misconduct allegations made against him.
Read more

Israel announced on Monday that the United States has been added to the country's "no-fly" list due to fears over the spread of the COVID-19 omicron variant, ...
Read more

The bipartisan package has already been passed by the Senate and will now head to the president desk.
Read more

Images of migrants flooding the Belarusian border zones against Poland and Lithuania prompted a no-confidence motion against a Nordic government more than 500 miles away.
Read more

See The Six Architecture Finalists for This Year’s Stirling...

A bridge, a museum, a mosque… Here’s where the best of UK architecture is in 2021. – BBC
Read more

It's a good time to spoil your cats, dogs, reptiles, or hamsters with discounts on some of our favorite products.
Read more

The gunman accused of killing three co-workers at a Maryland office park and injuring three others is in custody. Radee Labeeb Prince was arrested in Newark, Delaware, Wednesday night after a manhunt. CBS News' Errol Barnett reports.
Read more

As the U.S. and Russia talk, Ukraine braces for...

Justin Trudeau: We can smash one of the defining...

While we have seen progress toward gender equality around the world in the 26 years since the 1995 World Conference on Women, more is needed from everyone. At this crucial moment, this is why Canada and the Ford Foundation are proud to join together to push f…
Read more

The challenges Novak Djokovic faced in his childhood and throughout his career helped the 34-year-old Serb in his bid to become the greatest tennis player of all time, his former mentor Niki Pilic told Reuters.
Read more

EXPLAINER: Why are foreign tech firms pulling out of...

Yahoo Inc. said this week that will withdraw from the China market
Read more

Gary Wills, who lives in Germany, says he is "gutted" to miss out on the "chance of a lifetime".
Read more

A senior doctor says more voices from ethnic minorities need to be heard in the profession.
Read more

January 6 committee issues first round of subpoenas to...

A House committee investigating the January 6 attack on the U.S. Capitol issued its first round of subpoenas to four of Former President Trump's closest advisers and associates. Weijia Jiang has the latest.
Read more

The story of the Winchesters may not be over: Jensen Ackles and his wife, Danneel, are developing a 'Supernatural' prequel about Sam and Dean's parents.
Read more

Russia has strongly repeated its demand that NATO will not expand eastward, despite the rejection of that by the military alliance amid a Russian troop buildup near Ukraine
Read more

Tokyo crowds decision to be part of wider ruling...

Senior Olympic official John Coates says a decision on whether spectators will be allowed at the Tokyo Games will be made at the end of June as part of a more general ruling for all sports events in Japan, the Australian said on Friday.
Read more

The Fox News host said they would never normally play a tape of a foreign adversary criticizing the government, before showing clip from Putin's NBC interview.
Read more

It’s not just Bixby telling us: the next Samsung Unpacked is officially happening on August 11, Samsung has announced, leaving us wondering what big gadgets will get revealed.
Read more

Bills to legalize the practice of students earning money for the use of their name, image or likeness was signed into law by the governors of South Carolina and Georgia on Thursday.
Read more

If you're looking for a job, you may need to get a jab first. CBS News' Elise Preston reports on the growing number of job listings that come with a vaccine mandate.
Read more

Record of Scotland’s largest battle to be updated

At this point in its history, Volvo’s Polestar brand is best known for making upscale EVs like the $60,000 Polestar 2. That’s what makes its latest project, Re:Move, so unusual. It’s a three-wheeled electric sled that came out of a remote collaboration betwee…
Read more

Today on "Face the Nation," back from his trip abroad, President Biden returns home to face familiar problems.
Read more

Dozens of Democratic lawmakers on Friday demanded the Biden administration to reopen a federal investigation into the death of Tamir Rice, who was fatally shot by police in 2014 when he was 12 ...
Read more

Russia succeeded in overturning a judgment for a record $50 billion to former shareholders of Yukos Oil Co., meaning the 16-year legal saga that raged between the Kremlin and the owners of what was once Russia’s biggest oil company is set to continue.
Read more

Money Stuff: Archegos Got Too Big for Its Banks

Indian smartwatch market had a bumper three months since July 2021, and the growth can be attributed to promotions across various platforms, along with new launches, which contributed to around 28% of shipments.
Read more

Trump-era grievances could get second life at Supreme Court

The Supreme Court's most conservative justices are signaling an interest in issues closely associated with former President Trump, from rules on social media platforms to how elections are governed.Justice Clarence...
Read more

The Biggest City in Lauren Boebert’s District Has Some...

Swing voters in Pueblo, Colorado’s “Steel City,” say they are getting frustrated with a U.S. representative they see as more focused on her own celebrity than her constituents.
Read more

Has Henry Cavill been cast in Amazon’s Mass Effect...

Taiwan’s TSMC says it has responded to U.S. chip...

A group of about 40 people walked on to Richard Drax's land to "start a conversation" about access.
Read more

Great Britain's Laura Muir did not get much sleep after her 1500m silver, but is now starting to come to terms with her success.
Read more

Democratic senator says his party should move forward on...

Democratic Sen. Chris Van Hollen said Wednesday that it's time for his party to move forward on infrastructure legislation without Republican agreement, asserting that members of his party "cannot just sort of twiddle our thumbs at the negotiating table while…
Read more

Romney on Trump’s return to rallies: ‘It’s entertaining but...

Republican Sen. Mitt Romney on Sunday called on members of his party to "move on" from Donald Trump's 2020 election lies, equating the former President's return to rally-style events to wrestling entertainment as Trump goes after those who defied him.
Read more

Middlesbrough manager Chris Wilder tells Football Focus that he is not bothered by the expectation surrounding his appointment, after his successful stint at Sheffield United.
Read more

The push among democrat lawmakers and left-wing media to defund the police has hurt both metropolitan and rural police departments according to one veteran of the New York City police department and an Idaho sheriff.
Read more

Russian businessman Pavel Grigoriev and his wife are filling out forms at a vaccination centre housed in a huge exhibition hall in Belgrade, some 1,700 kilometres (,1060 miles) from their home in Moscow.
Read more

NCAA TOURNAMENT 2021: PICKS FOR EVERY FIRST-ROUND GAME AGAINST THE SPREAD