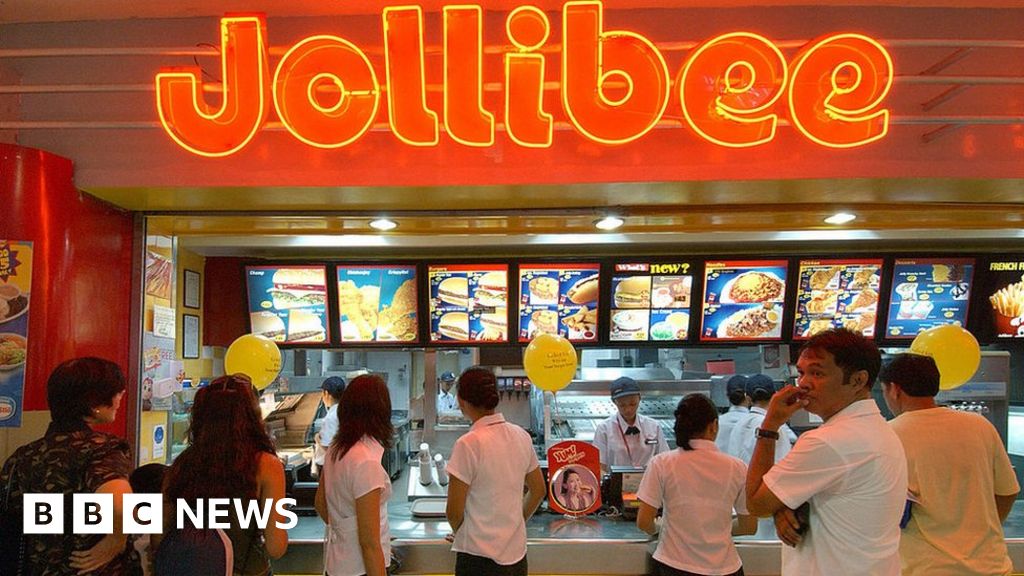 The Philippines’ largest restaurant chain, Jollibee, is eyeing global expansion with 450 new eateries due to open this year.

Famous for its crispy fried chicken, it sees “opportunities” created by Covid-19 as it targets overseas markets.

Jollibee’s chief executive said his long-term goal is to become one of the world’s top five restaurant chains.

Along with expansion in China, South East Asia and the US, it also has outlets planned for Wales and Scotland.

The Philippines sank into recession in 2020 and the strength of its expected recovery has been hampered by a delayed national vaccination campaign.

This is one of the reasons it is targeting foreign markets, and wants more than half of its sales to come from abroad by 2025.

Jollibee, also known for its sweet spaghetti, has spent 7bn pesos on “business transformations”, including upgrades to its food delivery and online sales.

Jollibee, seen as Asia’s equivalent of KFC, also owns a number of other brands including Greenwich pizza chain and Smashburger.

Around 80% of its new stores will be overseas and “equally split” among China, North America and South East Asia, including Vietnam, the Philippines, Singapore and Malaysia.

“This year, we are set to further expand in new areas in the UK by opening our Jollibee store in Scotland in Edinburgh, and in Wales in Cardiff,” Jollibee spokesman Ernani Barrientos told the BBC.

Jollibee’s signature dish is called the Chickenjoy, a breaded crispy chicken meal, with a marinade it says is a trade secret. This is a bestseller in “every market in the world” the Manila-based company says.

The Yumburger is another signature product.

But for some of the new countries it is opening up in, it will be tweaking its menus.

“While we find that our signature products of Jollibee are popular across the different markets – and Chickenjoy continues to win over fans – we are attuned to the local market,” Mr Barrientos added. Yankees hitters have clawed out of an early season slump with a string of clutch, late-game hits.
Read more

Transgender employees at the streaming giant are leading a walkout in protest of Dave Chappelle's new special and comments made by CEO Ted Sarandos.
Read more

A walkout by Democrats deprives the state legislature of a quorum to pass the divisive bill.
Read more

Apple has been struggling to meet growing demand for its new flagship iPhone 13 series devices and the situation might ease only by February, which is when suppliers are promising a hike in chipset shipments.
Read more

Biden’s pick for bank watchdog pulls out after GOP...

President Biden's pick to lead a top bank regulator withdrew her nomination Tuesday after blistering attacks from Republicans and concerns among moderate Democrats.Saule Omarova, who Biden nominated to...
Read more

Do new laws mean an early general election is...

Boris Johnson is close to taking back powers to set the date of the next general election when he chooses.
Read more

Covid vaccine and test passes to be introduced in...

People will need to show they have been vaccinated or had a negative test for clubs and large events.
Read more

Presented by Unite Us Good Wednesday morning! Enjoy your Thanksgiving break, because lame duck starts in earnest soon after we come back. And as Dustin...
Read more

Scotland will face Ukraine at Hampden in the World Cup play-off semi-finals before potentially visiting either Wales or Austria in the final.
Read more

Boehner on Clinton impeachment: ‘I regret that I didn’t...

Within minutes of the attack in Manchester, New York City police dispatched heavy weapons teams to high profile locations like Madison Square Garden. In Dallas, police also made a show of force at a John Legend concert. Jeff Pegues reports on why large public…
Read more

You Need a Place to Move to Before You...

The "priceless" work in Aberdeen is described as having been looted by British soldiers in Africa in 1897.
Read more

Texas asks appeals court to allow enforcement of the...

Texas on Friday asked a federal appeals court to swiftly allow enforcement of the most restrictive abortion law in the U.S., two days after a judge in Austin suspended the statute known as Senate Bill 8.
Read more

The brother of Jeffrey Epstein’s former girlfriend Ghislaine Maxwell says she should be released on bail from a U.S. jail
Read more

Alyssa Milano arrested during voting rights protest outside of...

Alyssa Milano was arrested on Tuesday while protesting outside the White House. The actress was advocating for voting rights.
Read more

A South African court on Tuesday adjourned former president Jacob Zuma's arms deal corruption trial to August 10, after the former leader applied for a postponement to appear in person rather than virtually.
Read more

Biden eyes a trim and slash approach for cutting...

The party is divided between spreading the pain around or protecting and preserving its favorite pieces. It may have to do both.
Read more

Carlson said that large portions of James' report on Cuomo are "absurd" and "don't make sense", including one part about staffers sitting on Cuomo's lap.
Read more

Murkowski has the moxie to take on Trump. Will...

The Alaska Republican swatted her GOP challenger, boosted by the ex-president, as "somebody with a pulse." But she's also mum about reelection.
Read more

Here are our top picks from Nordstrom’s Half-Yearly Sale,...

The first installment of Nordstrom's iconic Half-Yearly Sale is going on now, and while we wrap our minds around the fact that it's somehow almost halfway through 2021, you're going to want to peruse some of the sale's best deals ASAP. Now through June 6, you…
Read more

An official report on lobbying says Lex Greensill's conflicts of interest 'should have been considered".
Read more

A service is being held at Canterbury Cathedral three months after the community officer was killed.
Read more

Major League Baseball won dismissal of a lawsuit by an umpire alleging he was discriminated against for promotions and World Series assignments because of his race, after a federal judge found the evidence fell short.
Read more

How college athletes will be cashing in after Supreme...

The Supreme Court’s decision against the NCAA paves the way for college athletes to be paid, though the court ruled only on education-related benefits.
Read more

Some petrol stations closed on Thursday amid a driver shortage that has caused havoc with supply chains.
Read more

The Coachella Valley Music and Arts Festival will return in 2022 after multiple cancellations due to the COVID-19 pandemic.Coachella announced Tuesday that it will return for two separate weekend...
Read more

Australia’s Hughes to grind through injury to Beijing –...

Having already battled back from six knee surgeries, determined Australian snowboarder Jarryd Hughes has no intention of letting an ankle injury derail his bid for another Olympic medal at the Beijing Winter Games.
Read more

Ja Morant scores 41 points as the Memphis Grizzlies come from behind to beat the Los Angeles Lakers and record a third straight win.
Read more

New neuroscience-based technologies aim to improve decisionmaking under pressure. But solving systemic problems will take a lot more than that.
Read more

On The Money: Senate infrastructure talks on shaky grounds...

Happy Monday and welcome back to On The Money, where we're watching Olympic Rugby sevens very strongly. I'm Sylvan Lane, and here's your nightly guide to everything affecting your bills, bank accoun...
Read more

The official trailer for Venom: Let There Be Carnage has landed – and it looks as funny, violent and bonkers as we expected it to be.
Read more

Russia says it may fire on warships after Black...

Russia is prepared to target intruding warships if they fail to heed warnings, a senior Russian diplomat declared Thursday after a Black Sea incident.
Read more

A woman who once publicly defended R. Kelly against allegations of abuse as one of his "girlfriends" continued testifying anonymously against the singer Tuesday, describing their volatile relationship and what it was like being one of his multiple live-in gir…
Read more

The 25 Colleges With the Best Food

These colleges' students are treated to some of the best food on campus, according to data and reviews.
Read more

The Search For Gabby Petito May Be Coming To...

Authorities on Sunday, September 19th discovered a body at Grand Teton National Park in Moosey, Wyoming where the search for missing Gabby Petito was focused. Sources at the FBI Denver office could not confirm the body was in fact Ms. Petito nor could they co…
Read more

Two Republican lawmakers on Monday wrote to Education Secretary Miguel Cardona pressing him for answers on how the department formulated its guidance for schools to resume in-person learning during the coronavirus pandemi...
Read more

Michigan lawmakers look to a less-toxic future in Congress

Andy Zaltzman is joined by Geoff Norcott, Anand Menon, Felicity Ward and Eleanor Tiernan for a look back at the week's headlines Items on this week's agenda include foreign holidays and sheep. Stories range from red to green via amber in terms of national im…
Read more

Vaccines Work On This India Variant. Experts Fret About...

The good news is that the vaccines work against a new virus strain circulating in India that’s spread to several other countries.
Read more

Arizona groups are working to vaccinate 5,000 Central American migrants whom they say are difficult to reach online, according to a local church leader.
Read more

Michael Knighton: The man who could have bought Man...

In August 1989, Michael Knighton celebrated his Manchester United takeover deal at Old Trafford. But the plotting against him had just begun.
Read more

Stardock is on hand with more interface morphing software, though like Windows 11 itself, the app is still in beta.
Read more

Woman Spots Huge Spider in Car While Driving at...

These large, long-legged Australian huntsman spiders are notorious for entering cars and being found behind sun visors.
Read more

Ireland secure a dramatic 2-1 victory in the one-day series against West Indies as they hold on for a two-wicket win after a late wobble.
Read more

Users will no longer be able to post content including "sexually-explicit conduct" on the subscription site OnlyFans starting Oct. 1, the company announced Thursday."In order to ensure the long-...
Read more

The planemaker has accepted responsibility, in return families of the victims will not seek punitive damages.
Read more

Pittman's actions during the insurrection have come under increased scrutiny.
Read more

Nearly half of UK workers are being spied on...

Many employees going off-grid to protect their privacy, placing their organizations at risk.
Read more

Where Will Yields Go From Here? (Radio)