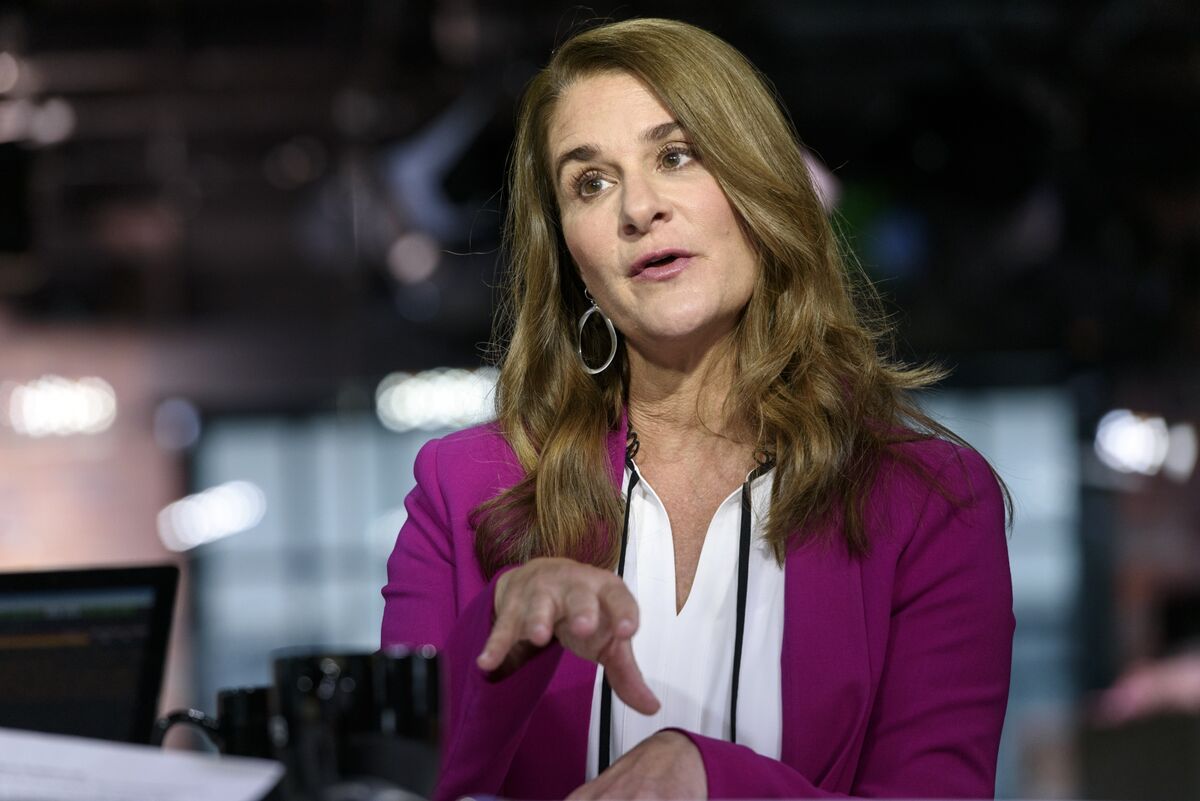 Government, rather than billionaire philanthropy, is and will continue to be the main catalyst for meaningful change in the world, according to Gates Foundation co-chair

Philanthropic initiatives can often take risks, she said in an interview Wednesday at the

Bloomberg Equality Summit. They can try innovations that sometimes work and sometimes fail. They can look for new solutions, they can help us collect the data. But ultimately its always up to government to scale up these innovations, to create this change.

Bill Gates, the worlds third-richest person with a net worth of $140 billion, according to the

The Gates Foundation, which the couple founded together, is one of the largest private charitable foundations in the world, having made almost $55 billion in

grant payments through the end of 2019. A former general manager at Microsoft, Gates now helps drive strategy at the foundation, with a particular focus on gender equity.

A major supporter of vaccine development and distribution efforts long before the pandemic, their foundation has donated hundreds of millions of dollars toward the production of Covid vaccines and tests. Gates cited the creation of a Covid-19 vaccine as a perfect example of how wealthy private individuals can work in tandem with entities like pharmaceutical companies, providing research money to leverage innovations.

But ultimately, she said, its up to governments to execute.

Its billions of dollars from the government that will pull that vaccine through and purchase it for Americans and people in low-income countries. she said. So its always up to government, though philanthropy can help lead the way.

3 monkeys that escaped, were captured after Pennsylvania crash have been... 3 monkeys that escaped, were captured after Pennsylvania crash have been... The most political garden in America is still sowing...

Since leaving Washington last January, there have been only a handful of things that have drawn former first lady Melania Trump out of her social media silence: holidays, the anniversary of Be Best, thanks for birthday wishes.
Read more

What’s happening in Tonga is a microcosm of China’s expanding global influence and why the United States is losing ground fast.
Read more

The suspended rollout of AstraZeneca Plc’s Covid-19 vaccine in some European Union countries over concerns about possible side effects could delay a goal of immunizing three-quarters of their populations by as much as a month.
Read more

Thousands turned out in the Czech capital of Prague on Sunday for protests against the government's vaccine mandates, ...
Read more

Lebanon’s president says no one is protected in port...

The Sony WF-1000XM4 have arrived, with lots of upgrades over the previous model that instantly make them the best true wireless earbuds you can buy.
Read more

The Queen and Prince Philip: An enduring royal romance

During their 73-year marriage, he was the Queen's public support and the person who knew her best.
Read more

A massive fire broke out at a building in Puyallup, Washington, which contains 1,000 pounds of anhydrous ammonia, according to authorities.
Read more

DC officer beaten unconscious on Jan. 6 is back...

Holders Manchester City will go to West Ham in the Carabao Cup fourth round.
Read more

Dinkie Flowers, who is about to turn 100, says it is important "not to sit on your bum all day".
Read more

For the second year in a row, the Utah-based festival is a virtual event, with world premiere documentaries and narrative films streaming online. Here are some of the early highlights.
Read more

A 56th-minute goal from Joe Ironside hands Cambridge United a shock lead at Newcastle United in the third round of the FA Cup.
Read more

McAuliffe, Youngkin spar over vision for commonwealth in 1st...

On the eve of the first day of early voting, Terry McAuliffe and Glenn Youngkin faced off in their first debate, presenting contrasting visions for how to lead Virginia.
Read more

A 1981 Ford Escort given to Princess Diana by Prince Charles as an engagement present is being auctioned on Jun 29. The silver four-door hatchback has been owned in secret by an admirer of Diana's for over 20 years.
Read more

The US will continue airstrikes in support of Afghan forces fighting the Taliban, a top US general said Sunday.
Read more

The health secretary says mistakes were made when patients were discharged from hospital to care homes during the pandemic.
Read more

Those dreams include family dinners, makeovers and even setting up a Christmas tree.
Read more

In an unusual North Korean parade that showcased military animals and virus workers in hazmat suits in place of ballistic missiles, leader Kim Jong Un still managed to seize the spotlight by looking thinner and more energetic than he has in years
Read more

Suns vs Bucks live stream: how to watch game...

Suns blaze ahead 2-0 – could Chris Paul finally get his glory? Here's how to watch the Bucks vs Suns series and live stream NBA Playoff Final action from anywhere.
Read more

Alberto Carvalho, the superintendent of Miami-Dade County Public Schools, says he is working to negotiate safety protocols for reopening schools ahead of the new school year.
Read more

Vanessa Bryant, the widow of NBA legend Kobe Bryant, claimed the shoes were not approved to be manufactured or sold.
Read more

Philippines letting kids outside for first time in over...

As the country grappled with the pandemic, it mandated that children five and above stay indoors.
Read more

The Biden administration on Wednesday announced the planned construction of a wind farm off the coast of Rhode Island that will supply power to New York.
Read more

Michael Cohen on Giuliani’s legal fees: He won’t get...

The top tweets from the weekend's football, including a spat between Ole Gunnar Solskjaer and Jose Mourinho over parenting techniques.
Read more

A restrictive voting bill in Texas that was on the verge of Republican Gov. Greg Abbott’s desk has failed to pass Sunday night after Democrats walked out of the House chamber before a midnight deadline
Read more

Emma Raducanu's defeat in her first match since winning the U.S. Open was a "little bump", fellow Briton Andy Murray said, backing the 18-year-old to deal with expectations and disappointment in a mature way.
Read more

Two Myanmar citizens were arrested in the U.S. on Friday over an alleged plot to kill the nation's ambassador to the United Nations. Federal prosecutor...
Read more

At least 9 injured in series of drive by...

Arizona police have a suspect in custody after at least 9 people were injured in a series of what appeared to be drive-by shootings Thursday.
Read more

The London Stock Exchange Group has proposed a special market for private companies to trade their shares publicly, the Wall Street Journal reported, citing a person familiar with the matter that it didn’t identify, and proposals from the LSE to regulators.
Read more

Covid: France to reopen bars and restaurants as lockdown...

Virtual currencies are retreating so broadly and sharply, it’s testing the durability of the cryptocurrency boom.
Read more

French President Emmanuel Macron has unveiled a mock-up of the next generation of greener super high-speed trains, known in France as TGVs — four decades after the first TGV was launched
Read more

Simon Case, the civil servant spearheading the investigation into whether the prime minister’s office and other government departments hosted lockdown-breaking parties last year, has stepped back from the role following reports that he hosted a similar event …
Read more

Jade Ward was found dead at a property in Shotton, Flintshire, at about 09:30 BST on Thursday.
Read more

Darius Garland scored 22 points for the Cleveland Cavaliers - including two free throws with nine seconds left - in a 91-89 win over the Boston Celtics.
Read more

Line of Duty: Five unanswered questions for the series...

Ahead of the series six finale, these key questions definately need more than "no comment".
Read more

The son of San Jose Sharks legend Patrick Marleau was nearly kidnapped at a hotel this week but was reunited with his family thanks to the “Good Samaritans” that saw the incident unfold, his wife said.
Read more

A special tribunal in The Hague investigating allegations of atrocities committed by Kosovo pro-independence fighters opened its first case on Wednesday, against a commander accused of torturing prisoners during the 1998-1999 conflict with Serbia.
Read more

Drug deaths in England and Wales highest since 1993

Former CISA Director Chris Krebs said that this has been a "remarkable week in terms of pronouncements" on vaccine misinformation on social media.
Read more

Ex-UK Marine leaves Kabul with dogs, cats but no...

A former U.K. Royal Marine who waged a high-profile campaign to leave Afghanistan with almost 200 rescued dogs and cats has flown to safety
Read more

How could U.S. respond to new COVID-19 variant?

Some governments have already started imposing travel restrictions because of a new potentially dangerous COVID-19 variant detected in South Africa. Britain has banned flights from South Africa and other neighboring countries, and Israel and Singapore also an…
Read more

The ruler of Dubai, Sheikh Mohammed bin Rashid al-Maktoum, used agents of Dubai and the United Arab Emirates (UAE) to hack into and monitor the phones of his ex-wife Princess Haya bint al-Hussein, her legal advisors, and staff, during an ongoing custody battl…
Read more

Visitors have been drawn to West Virginia by its mountains, winding roads, and wild rivers, but until last week, America's 35th state had no national park. New River Gorge was awarded the honor of becoming the nation's newest park - and the only national park…
Read more

Artificial Intelligence may diagnose dementia in a day

The system being tested should spot the disease long before symptoms or obvious brain signs develop.
Read more

Navient, one of the nation's largest student loan companies, has settled allegations of predatory lending practices, agreeing to cancel $1.7 billion in debt for more than 60,000 borrowers. It will also pay out $95 million in restitution to 350,000 borrowers.
Read more

Apple has known about the vulnerability, which also affects iPadOS 15 and Safari 15, since late November.
Read more

Premiership: Gloucester call off game at Worcester Warriors after...

Saturday's Premiership game between Worcester and Gloucester is cancelled due to a new Covid-19 case at the Kingsholm club.
Read more

An ex-collegiate soccer coach admitted in court on Monday that she aided parents in getting their children into elite colleges by creating fraudulent student athlete profiles in exchange for money....
Read more

The Thrusters Behind NASA’s Mission to the Asteroid Psyche

The front pages focus on concerns over rising Covid cases and calls for poorer nations to be given more jabs.
Read more

Afghanistan: National flag protesters in Jalalabad appear to be...