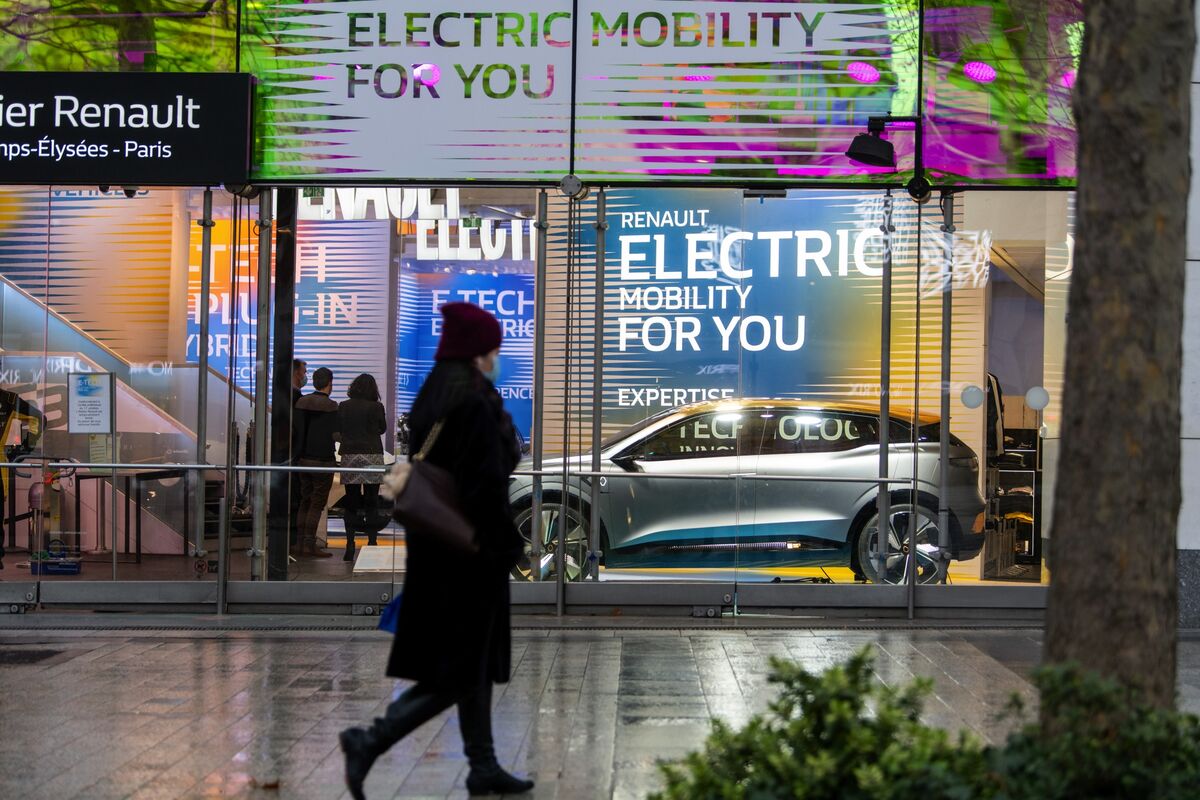 Europes auto industry had its worst February sales in eight years as much of the region remains locked down to contain the coronavirus pandemic.

Registrations plunged by a fifth to 850,170 vehicles, the lowest total for the month since 2013, the European Automobile Manufacturers Association said Wednesday. Spain led declines among major markets with a 38% fall, while the U.K. shrunk 36%.

upbeat forecasts for the year. Shuttered showrooms, slow vaccination and economic damage caused by the virus call into question the high expectations for earnings recovery, according to Michael Dean, an analyst at Bloomberg Intelligence.

European auto-production expectations could be scaled back for the first quarter, Dean wrote in a

Renault SA is the

most at risk because of its high exposure to the region.

Note: Data are for European Union, European Free Trade Association and the U.K.

While sales in China — the most important market for

Daimler AG — continued to recover last month, deliveries there are broadly in line with 2019, before the health crisis roiled the market.

Projecting demand in Europe will remain difficult even as year-over-year comparisons get easier in the coming months, BI analyst Gillian Davis wrote in an earlier

Among the continents biggest automakers, deliveries for Renault fell the most at 29%, followed by

Stellantis NV at 22%. Both manufacturers count the region as their most important sales hub. Volkswagen fared marginally better with a 19% decline.

Kansas stand your ground law cited in lack of charges in... Kansas stand your ground law cited in lack of charges in... A judge has given the green light to a lawsuit by a woman who has accused Prince Andrew of sexually abusing her when she was 17. The prince's lawyers asked for the case to be dismissed because of a settlement Virginia Giuffre reached with lawyers for Jeffrey …
Read more

A big idea seems to have fallen by the wayside but could make all the difference as America moves beyond the pandemic.
Read more

French President Emmanuel Macron said Saturday that France and Britain would propose a safe zone in Kabul, Afghanistan, that would help protect those who were trying to flee the country amid the chaos following the ...
Read more

6 neighborhoods to watch in the Boston mayor’s race

What is Apple ProRes? The iPhone 13’s rumored video...

The Apple ProRes format is popular among video shooters and might be coming to the iPhone 13. But what could that mean for mobile video?
Read more

Rebuilding Wales’ NHS ‘could be bigger challenge than Covid’

Experts say getting the NHS back in health will be the next Welsh government's biggest challenge.
Read more

A smart exercise bike that adapts to your level of fitness to give customized high-intensity workouts – but it comes at a price.
Read more

Betting in football: Could a gambling sponsorship ban ruin...

A gambling sponsorship ban in football is being considered by the UK government, but what damage could it do to clubs?
Read more

UPS on Thursday announced plans to hire more than 100,000 workers for the 2021 holiday season. In a statement, the company said the new hires will support the “anticipated increase in annual package volume” that begins in October and runs...
Read more

Record number of phones launched in March 2021 in...

March 2021 has been one of the busiest months in the past few years for the smartphone market in India. Here are all the phones that were launched in India in the month.
Read more

The Justice Department has reached a settlement with victims' families in 2015 Charleston church shooting.
Read more

Portugal has fully inoculated 80% of its population against the coronavirus, official data showed, becoming one of the world's most vaccinated nations as authorities gradually drop most COVID-19 restrictions.
Read more

The 86-year-old runner who refuses to slow down

Tony Bowman, who has had two heart attacks, is aiming to run the 100m when he's 100 years old.
Read more

At least one tram car is stuck due to icy conditions in the area.
Read more

Manchin has yet to say a word on whether he supports Tracy Stone-Manning, Biden’s nominee to lead BLM that has come under major scrutiny in recent weeks.
Read more

Nintendo is warning customers about a fake site that could steal your cash, payment details and even your identity.
Read more

Washington, D.C., residents are protesting the Capitol fencing that has been up since the Jan. 6 riot with bubbles and picnics.
Read more

There are no confirmed cases yet in Northern Ireland, but officials say it could already be here.
Read more

Civil rights groups are demanding that the Los Angeles police officer who inadvertently shot and killed a 14-year-old girl during an encounter with a suspect at a Burlington Coat Factory be charged with involuntary manslaughter.
Read more

A video obtained by ITV News shows staff joking about a No 10 Christmas party during a mock press conference.
Read more

Paul McCartney is postponing the U.S. leg of his tour, Angelina Jolie is raising awareness about one of the cruelest aspects of war -- and more. Suzanne Marques reports on the day's top entertainment stories.
Read more

Putin: Russia must build up defenses in view of...

China may be secretly sitting on the two most...

Cambodia has begun a fourth round of vaccinations against the coronavirus in response to the omicron variant, with high-risk groups being among the first to receive the additional boosters
Read more

The U.S. Supreme Court on Thursday rejected a Republican bid that had been backed by former President Donald Trump's administration to invalidate the Obamacare healthcare law, ruling that Texas and other challengers had no legal standing to file their lawsuit.
Read more

MSNBC contributor Dr. Christina Greer singled out Republicans for not accepting election results while at the same time arguing that Georgia Governor Brian Kemp “stole” his seat in 2018.
Read more

Coronavirus: Record number of food parcels given to NI...

Woman with Down Syndrome loses challenge of UK abortion...

Two top British judges on Thursday rejected a legal challenge from a woman with Down syndrome over a national abortion law that allows individuals to abort a fetus up until birth by citing "physical or ...
Read more

Speaker on babies in Commons: Rules change with the...

Lindsay Hoyle says there are "differing views" on the issue of mothers taking children in to the House of Commons.
Read more

Sheree McLaughlin had a years-long affair with Maurizio Gucci, which gave him the courage to leave his marriage with Patrizia Reggiani. It was a decision that would get him killed.
Read more

The harmonious US city run by Muslim Americans

Once a Polish enclave, Hamtramck, Michigan is now the first US city with an all-Muslim government.
Read more

Kansas, Oklahoma and Texas have seen everything from major flooding to major ice storms this weekend, causing power outages and even death. David Begnaud has more.
Read more

Man dies after van crashes into field near Dunscore

Police are appealing for information about the crash that happened near Dunscore in Dumfries and Galloway.
Read more

Boogie 2988, Jeff Wittek and Other YouTubers Joke About...

"I will take the blame for #YouTubeDOWN," said YouTuber JacksFilms, "I tried uploading my nudes in chronological order and it hated that."
Read more

Biden administration calls on states and cities to extend...

The White House is pushing governors and mayors to adopt measures that will protect renters after a federal eviction moratorium expired over the weekend. CBS News congressional correspondent Nikole Killion joins CBSN's Elaine Quijano with the latest.
Read more

Everything you need to know about the Mediterranean diet

The Mediterranean Diet consistently ranks as one of the healthiest overall diets. From knives and skillets to fresh fish and snacks, you can build your seaside happy place with these recommended buys.
Read more

Consumer Reports' Urvashi Rangan talks to the “CBS This Morning” co-hosts about a new survey that reveals many Americans are being misled by the wording on food labels.
Read more

The prestigious music school in Manchester is ordered to pay £45,000 to the victim, a court hears.
Read more

Rep. Louie Gohmert (R-Texas) appeared to downplay the deadly Capitol attack on Jan. 6 during a conference this past weekend that was attended by many QAnon conspiracy supporters, saying "it wasn't just right-wing ex...
Read more

Daily 30-minute workout ‘may not benefit everyone’

Glasgow Caledonian University scientists say the exercise you need depends on how long you spend seated each day.
Read more

The Supreme Court on Friday ruled that corporations set up by Congress for Alaskan Natives are eligible for a portion of the $8 billion in coronavirus relief funds that lawmakers set aside for tribal governments...
Read more

Hurricane season is forecast to be above average. So...

During the record 2020 Atlantic hurricane season, something happened that many people overlooked -- hurricane forecasts improved. And that saved lives.
Read more

Watch the best shots as Matteo Berrittini seals victory over Guido Pella in the first round at Wimbledon.
Read more

Scott Atlas had rapidly consolidated power on a platform that downplayed the seriousness of Covid to most Americans.
Read more

Infinix has added a new big battery budget phone in India with a gaming-centric chipset. Check out the specs and price here.
Read more

Kieffer Moore gives Wales the equaliser and their first goal of Euro 2020 with a glancing header from a Joe Morrell cross against Switzerland at the Olympic Stadium.
Read more

ACLU calling for investigation into Alaska official over controversial...

The American Civil Liberties Union of Alaska is calling for an investigation into an Alaskan official over controversial tweets discovered by The Guardian news outlet.ACLU spokesperson, Megan Edg...
Read more

Pick your winners for the TechRadar Choice Awards 2021 and be in with the chance of winning £1,700 worth of tech.
Read more

A vicious winter storm will slice through parts of the Southeast Sunday, dropping freezing rain, ice and snow, and is then expected to turn northeastward to the East Coast. Follow here for the latest news and forecasts.
Read more

The global energy crunch could help propel oil prices above $100 a barrel for the first time since 2014 and spur a global economic crisis, according to Bank of America.
Read more

The swell of Haitian migrants attempting to come to the U.S. shows the country needs a plan to help environmental refugees, advocates say, while warning that the swift deportation of those camped in Texas is in...
Read more

Three Sides to Every Story

The House's progressive leader is willing to bargain on the massive social policy bill. But she is willing to go only so far.
Read more

Western brands were recently hit by a backlash in China over statements on Xinjiang and the Uyghurs.
Read more

A class action lawsuit, alleging fraud by "Trump University," is set to start later this month in California. Saturday night, lawyers for the president-elect filed a motion seeking to postpone the trial until after his inauguration. A ruling could come Monday…
Read more

Divers spent most of the day in the murky waters of the Seccombe Lake in San Bernardino, California; Every year an anonymous, wealthy businessman plays the role of Saint Nick in a special way.
Read more

New Zealand feared an extremist but found no way...

Fans turned out to support a female goalie after students from a rival high school chanted vulgar and sexist slurs at her during a game last week.
Read more

The father of two children, found dead along with their mother and another child, said he was heartbroken.
Read more

What are the best International travel destinations in North America?