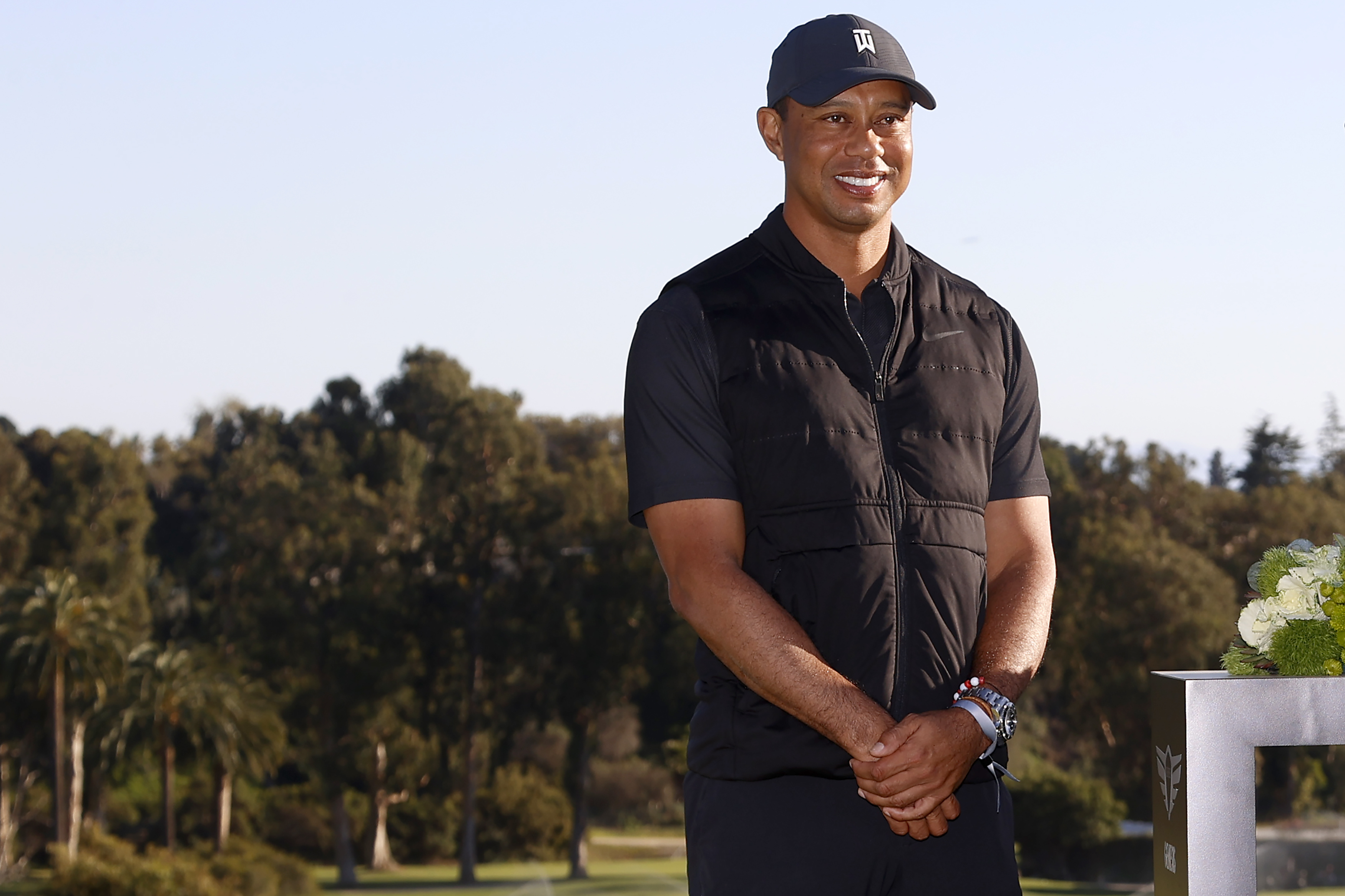 Tiger Woods is returning to golf games. He has signed a long-term deal with 2K, which also announced an agreement to buy PGA Tour 2K21 developer HB Studios. The acquisition is expected to close in the coming weeks.

Woods will act as executive director and consultant on PGA Tour 2K games. The deal grants 2K exclusive rights to use Woods’ name and likeness in the series and other golf games as long as their agreement lasts.

I am looking forward to making my return to the video game landscape, and with 2K and HB Studios, Ive found the right partners to make it happen, Woods said in a statement. Im honored to take part in this opportunity and look forward to sharing my expertise and insights as we build the future of golf video games together.

PGA Tour 2K21 was the second tour-licensed game HB Studios developed for the publisher. 2K has some other major sports licenses in its stable, including the NBA and WWE. It’s also returning to the NFL arena.

the face of EA Sports’ golf games for over a decade. EA’s last entry in the series was 2015’s Rory McIlroy PGA Tour.

Almost 25 years after he turned pro, Woods is still the biggest name in the sport, so his star power and guidance should lend 2K’s golf games some weight. It remains to be seen if Woods will return to the PGA Tour, however. He suffered injuries

to both legs in a February car accident. “Sometimes I Trip On How Happy We Could Be” is about seeking, nay, demanding pleasure for oneself
Read more

Religion and politics — the younger generation isn’t having...

Younger voters appear to have been especially turned off by the politicization of religion, fueling rise in those who claim no affiliation.
Read more

Sydney McLaughlin blazes to world record on way to...

Sydney McLaughlin roared back after the final set of hurdles to win 400m hurdles gold Wednesday in Tokyo, breaking her own world record from U.S. Trials in 51.46 to dethrone teammate and former world record-holder Dalilah Muhammad as the Olympic champion.
Read more

Sen. Shelley Moore Capito (R-W.Va.) said Thursday that she wouldn't support legislation raising corporate taxes, calling the idea a "non-starter" during a press conference. "I voted for the Tax Cuts an...
Read more

The VP candidates offer their thoughts on whether we're asking too much of law enforcement.
Read more

Thousands of centrifuges were taken out in the deliberate blast deep underground, the official says.
Read more

New Vatican law criminalizes abuse of adults, even by...

The most radical Meghan interview moment had nothing to...

While I do not suggest Meghan's experiences overlap with mine, there was something cathartic about hearing another woman of color discuss reaching her breaking point.
Read more

China sends more aircraft toward Taiwan, one day after...

The Chinese air force has sent more aircraft into Taiwan’s air defense zone, Taiwan’s military said on Saturday, one day after the largest incursion ever into the zone.
Read more

House Majority Leader Steny Hoyer, a Democrat from Maryland, spoke to CBSN Washington reporter Caitlin Huey-Burns for "Red and Blue" about how Congress is likely to respond to President Biden's American Families Plan and what he thinks about Democrats' chance…
Read more

U.S. sends aid to Haiti after quake but much...

Michael O'Leary says the crew was warned that a bomb would explode if the plane stayed on course.
Read more

Life expectancy in the U.S. decreased by nearly two years in 2020, mainly because of the pandemic, a new federal report suggests.
Read more

PSVR 2 could enter mass production in China, according to a Chinese analyst.
Read more

A growing number of women crossing the forbidding jungle of the Darien Gap between Colombia and Panama on their route north are reporting sexual assaults, grabbing the attention of Panamanian lawmakers
Read more

Hospital beds are filling up in Montana. CBS News correspondent Meg Oliver reports on how overrun one hospital is in Billings.
Read more

California has new House and Legislature maps for the next decade.
Read more

What Rene Girard's mimetic theory can teach us about politics and how we arrived at our moment. The post American Scapegoat appeared first on The American Conservative.
Read more

Taiwan's Foxconn (2317.TW) reported a better-than expected quarterly profit on Thursday due to strong demand for technology products from clients, such as Apple Inc , as people continued …
Read more

Pandemic fueling surge in organized thefts at stores across...

An increase in online shopping during the pandemic has also created a bigger marketplace for sellers of stolen goods.
Read more

Thanks to Qualcomm, Wi-Fi gaming performance enhanced in Windows...

US diplomat in El Salvador critical of government in...

Larry Elder: Vice President Harris, when will you talk...

The US faces a surge in crime, including homicide, in many American cities. Why aren't we discussing this root cause?
Read more

Gun control advocacy group Everytown for Gun Safety announced on Thursday that it would be spending $1.8 million in the 2021 Virginia elections to back Democratic candidates for governor, Terry McAuliffe, lieutenant gover...
Read more

An Afghan mother delivered a baby girl just after touching down at Ramstein Air Base in Germany Saturday aboard a US military evacuation flight, the US Air Force said on its social media.
Read more

China has stepped up its campaign to rein in commodity prices and reduce speculation in a bid to ease the threat to its pandemic rebound from soaring raw material costs.
Read more

Juul is the largest maker of e-cigarette products in the country.
Read more

George Floyd death: Ex-officer Chauvin will not take the...

Georgia Democrat Stacey Abrams announced on Wednesday that she is running for governor, setting up a possible rematch with Georgia GOP Gov. Brian Kemp in what could become one of the most closely watched races in the country.
Read more

Bobby Ternent and his father Gary Ternent are on trial at the Old Bailey accused of killing John Avers.
Read more

Watch as Georgia Stanway scores twice to lead Manchester City to a 3-0 win against Aston Villa in the Women's Super League.
Read more

Police in Arkansas said that three people are dead and a police officer was injured in a knife attack, ...
Read more

CDC director on push to increase COVID-19 vaccinations amid...

Asian stocks rose on Tuesday on an extended bounce on Wall Street as investors drew comfort from full approval granted to the Pfizer (PFE.N)/BioNTech vaccine and on easing worries of an imm…
Read more

The Disney Plus TV series' next instalment has a huge cameo appearance – but it isn't who you think it is.
Read more

Boris Johnson says he will do "whatever is necessary" to protect UK interests as the row continues.
Read more

Prince Harry and Meghan, Duchess of Sussex have denied a report in the British media that they did not ask Queen Elizabeth II about naming their daughter Lilibet, after the monarch's childhood nickname.
Read more

The summit will be virtual because Xi is declining invitations to attend all events outside China.
Read more

Major storm system moving through the West with strong...

British authorities on Tuesday announced they are charging another suspected Russian agent for his alleged role in a 2018 nerve agent attack on a former Kremlin agent and his daughter in England.Scotland Yard said...
Read more

Canada Goose Holdings Inc., in the midst of a move away from third-party retailers, says its strategy is working and the payoff is coming soon. Wall Street, however, remains skeptical.
Read more

As 2021 comes to a close, many people in richer parts of the globe are fretting over the risk of contracting COVID-19 and how rising infections are upending their holiday plans
Read more

Libyan security forces used "unnecessary and disproportionate" force to detain African migrants, shooting dead some of those trying to escape, the U.N. human rights office said on Tuesday as it demanded an inquiry into the violence.
Read more

Nearly 3,000 people in Wellington, New Zealand rallied on Tuesday to protest the country's sweeping vaccine mandates and restrictions, according to The New York Times. The mandates apply to about 40 percent of workers and require proof of...
Read more

Singer Luke Combs pays for funerals of 3 who...

Samsung Electronics Co. Vice Chairman Jay Y. Lee will be released from prison Friday after a justice ministry committee recommended that he receive parole, marking a dramatic reversal for South Korea’s political and business landscape ahead of a presidential …
Read more

The National Cathedral on Thursday will toll its bells 700 times to mark the 700,000 people who have died from COVID-19 in the United States since the beginning of the pandemic, ...
Read more

The New Mexico governor dismissed a member of the state Game Commission, which oversees wildlife conservation and hunting and fishing regulation.
Read more

Child’s leukemia treatment could be “a huge step forward”

After President Biden stirred controversy by claiming he would not sign a bipartisan infrastructure bill without having a massive partisan spending package alongside it, senior presidential adviser Cedric Richmond on Sunday said Biden will indeed sign the nar…
Read more

Gangs abduct 2 doctors in Haiti, including a needed...

Officials say two doctors at hospitals treating earthquake victims in Haiti’s capital of Port-au-Prince have been kidnapped, forcing one of the institutions to a declare a two-day shutdown in protest
Read more

A listing for a smartwatch believed to be the Samsung Galaxy Watch 4 suggests the battery won't be any bigger.
Read more

Regulators Plot Plan B for Stablecoin Rules If Congress...

A key group of financial overseers said it will take action to rein in stablecoins if Congress fails to pass comprehensive legislation to regulate the tokens, the latest sign that the U.S. government is becoming increasingly alarmed by threats cryptocurrencie…
Read more

The Royals' pitching staff struggled for a second straight day as Kansas City fell 10-5 to the Oakland Athletics on Wednesday afternoon.
Read more

David Westin hosts a new look at the financial stories that shape our world as seen through the eyes of people whose perspective we value.
Read more

EPA withdraws rule allowing use of radioactive material in...

The Environmental Protection Agency has withdrawn a 2020 rule that would allow a radioactive substance in some road constructi...
Read more