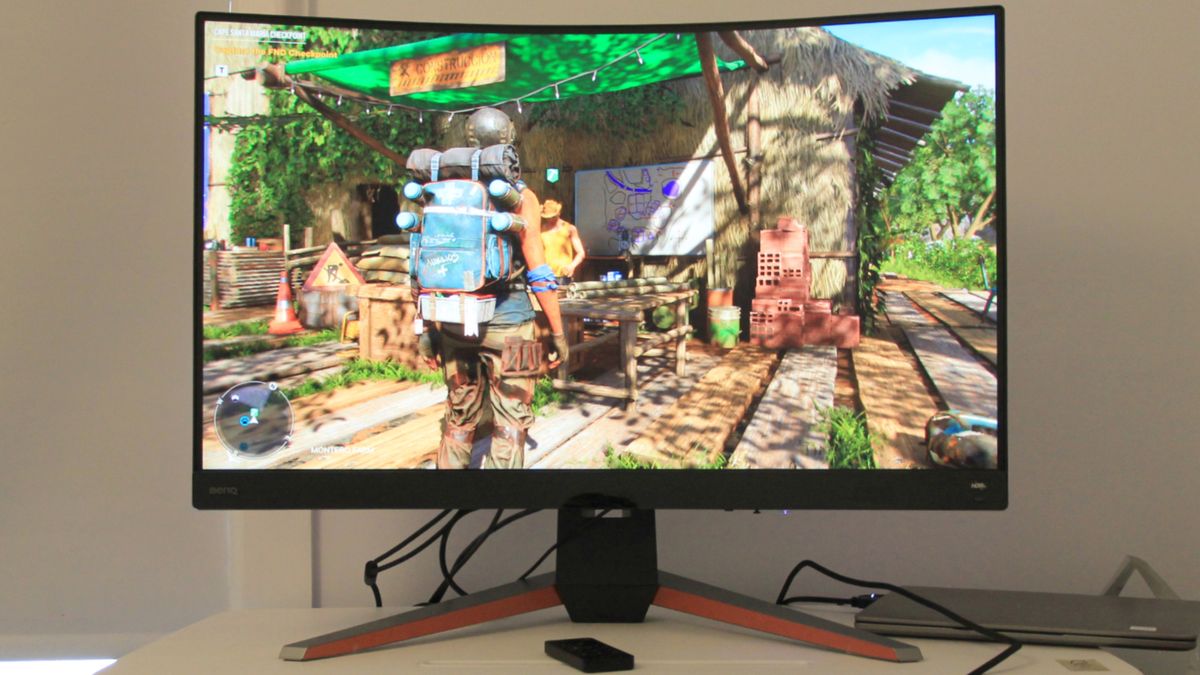 We’ve seen a few BenQ Mobiuz monitors now and while they’ve generally impressed us, they’ve also often fallen short in a few areas. This EX3210R offers a curved, 32-inch screen with a UHD, 2,560 x 1,440 resolution, a 165Hz refresh rate and offers supporting specs that mean it shouldn’t have any real weak points. Consider our interest piqued.

The EX3210R also sports Mobiuz’s familiar, funky, orange design flourishes on the stand and the large brownish speaker grille on the front. The latter isn’t decorative either; it masks two 2-watt speakers and a 5-watt sub. These can deliver some punchy bass and get reasonably loud without distorting or losing fidelity at the top, bottom or middle ranges. Impressive!

At the rear there are four thin RGB strips, which can display a single colour or pulse in a variety of patterns. As if that’s not enough, the solid stand allows 10cm height movement plus 15˚ pivoting in each direction and -5˚ to +15˚ tilt, so there’s plenty of adjustability.

Other key features include a two-port USB hub which can be used as a KVM switch. This is particularly useful when working from home and you need to swap between, say, a work laptop and your home PC – you just move a single USB cable and your peripherals all work. On top of this, a small infrared remote is also included and offers rapid, responsive access to all the monitor’s settings – and we relied on it regularly.

The screen itself is sharp and well lit. It gets nice and bright thanks to its 400-nit peak brightness and the slight (1000R rated) curve helps stave off eye strain because your eyeballs don’t need to refocus much when scanning across the large display. Eye care is also aided by an impressive matte anti-glare coating, which also banishes reflections. There are also Low Blue Light and Flicker Free features to help matters.

All the while, colours can be vibrant depending on your colour settings (you can optionally use the ‘Black eQualizer’ feature to brighten dark areas to reveal hidden enemies… and butcher colour accuracy as a result). It also supports 90% of the demanding DCI-P3 colour gamut. Colour transitions are impressively smooth.

BenQ raves about its HDRi technology which supposedly simulates HDR, but in our experience all it seems to do is annihilate whatever you’re watching by blowing out highlights and/or plunging shadows into darkness. Fortunately, it’s simple to turn off. However, what you’re left with is a display with only mediocre contrast: dark scenes can be washed out while details get lost in bright areas.

Another minor potential gripe was that we constantly switched between preset colour and performance modes to suit what we were watching – there wasn’t a one-size-fits-all mode, but you can make good use of custom settings to help alleviate this.

The BenQ Mobiuz EX3210R is available now in most major markets and costs $549 / £480 / AU$799. It belongs to a market segment where similar big-brand rivals can cost between one-third less and two-thirds more. Alternatively, you can find budget-brand models for less-than half price.

All the monitors in this space offer different specialities. Some save money on build quality, design, features and materials while others offer different technologies that cater to professional-level gamers, offer enhanced connectivity or are capable of superlative contrast. On this spectrum, the BenQ Mobiuz EX3210R sits impressively in the middle.

We like an easy-to-build monitor and the BenQ Mobiuz EX3210R delivers: the base has one, finger-friendly screw that connects it to the stem and the panel snaps onto the other end with a quick-release catch. Too easy. The tripod stand with its two, long, V-shaped front feet is very solid and looks funky with its orange-flourished inside legs (with black pin stripes).

There’s a generous degree of ergonomic manoeuvrability thanks to 100mm height adjustment. 15˚ pivoting in either direction and -5˚ to +15˚ tilt.

The rear is a stylish silver with some geometric detailing. It also has four LED strips which can be set to nine different colours and pulse in a variety of patterns.

At the front there’s an IR receiver for the small black remote. We were very impressed with how responsive this was and never bothered using the built-in mini joystick at the base of the monitor. Both methods of navigation allow rapid and intuitive access to quick-menu OSD settings, or the more-detailed lists.

The headline specs paint a good picture of the features on offer and include the 165Hz refresh rate, a 1000R-rated curve, the 2.1 speakers and a two-port, USB-A 3.0 hub which can act as a KVM switch. The latter allows you to swap a single USB-A cable between computers and use the same keyboard and mouse – ideal when bringing a work laptop home.

While the BenQ Mobiuz EX3210R’s curved screen will inherently reduce the eye-fatigue caused by your eyeballs constantly refocusing when scanning across the display, there’s also blue light adjustment to further improve matters. Plus, there’s an impressive anti-glare coating on the matte screen, which does what it’s supposed to in addition to banishing reflections.

In terms of gaming features, there are no on-screen crosshairs but there is a ‘Black eQualizer’ setting, which butchers contrast but helps reduce the depth of dark and bright areas to stop enemies jumping out of shadows or the sun. This too, works well.

The Blur Reduction feature can sharpen-up moving images, but we found it came at the expense of noticeable ghosting with very visible double edges preceding objects.

The feature that BenQ shouts about the most on the Mobiuz EX3210R is HDRi. This aims to boost the screen’s modest 2,500:1 contrast into HDR territory through intelligent simulation. It’s easily accessed via a button in the right-hand lower corner or alternatively via another on the remote.

We tried it with multiple media types with Windows HDR turned on and off. There are four settings: Game, Cinema, Display and off. We by far preferred the latter. While there are some scenes in a game or movie that might occasionally look a little better, for the most part the result is dreadful – plunging dark areas into blackness and bright areas into a white out. More on this below.

All ports are down-facing and set in the middle at the rear. There are two downstream USB-A 3.0 ports, USB-B for upstream connectivity, two HDMI 2.0 ports and a DisplayPort 1.4. There’s also a 3.5mm audio jack.

HDMI and DisplayPort cables are included.

The BenQ Mobiuz EX3210R’s IPS panel is generally bright and evenly lit. The UHD 2,560 x 1,440 resolution makes the Windows Desktop look very crisp and clear on the 32-inch screen. Colours can appear as muted or as overly-vibrant as you desire, depending on your settings. There’s minimal banding in both colour and monochromatic colour gradients, although blocky artefacts can appear in dark areas of videos on occasion.

However, while we had few issues with watching movies (as colours were vibrant and motion was smooth) after living with the near-infinite contrast of OLED, we did notice that there is a fair amount of backlight leakage from the sides, top and bottom. This mainly manifests as less-than-true-black letterbox bars in movies. However, only cinema purists would likely be annoyed.

More of an issue is contrast performance, which is rated as 2,500:1. While the screen can get nice and bright, detail can blow-out in bright areas, and dark scenes tend to get washed out with excess brightness. Again, this isn’t an OLED screen, but the traditional contrast limitations associated with IPS panels are manifested here. This is where BenQ’s HDRi simulated-HDR settings come in.

The right side illustrates HDRi turned off: you can see everything in the dark room but it all looks washed out. On the left is HDRi turned on: it’s more dramatic but most details have become invisible and that’s not practical for gaming. (Image credit: Future)

If a dark scene looks too bright, turn on the simulated HDR and suddenly it’s properly dark. However, you’ll lose so much detail elsewhere in the picture that any contrast concerns suddenly fall by the wayside. In bright scenes it tends to increase whiteouts, with even more detail in bright areas getting lost. In scenes made up of particularly bright and dark areas, you mainly lose detail in both at the same time. Consequently, we left it turned off.

We are being a bit nitpicky here. This is a gaming monitor after all, and while it’s nice to have amazing contrast in Cinematic games like Far Cry, anything competitive requires you to see as much as possible and for it to be rendered smoothly even when in fast motion. And the BenQ EX3210R succeeds here.

It’s also worth noting the performance of the speakers. There are two 2-watt units and a 5-watt sub – that’s a lot for a monitor and they deliver impressive sound. There’s punchy bass and decent volume. Several audio presets enable you to tinker with it further, but generally we were pleased with fidelity from top to bottom.

Ultimately, there are far worse gaming monitors out there, and those that offer better contrast (and proper HDR) tend to be considerably more expensive while being deficient in other areas.

We’ve used gaming monitors with superior displays and we’ve used many that are much worse. While we’d like to see better contrast performance, it really doesn’t feel like a big miss during general use. This monitor is very good at everything from work to play, and there are few better all-rounders on the market. White House Walks Back Biden Ruling Out Rockets for...

No, the war in Ukraine is not about NATO

WHO: COVID-19 cases down 17 percent globally

Intel CEO on CHIPS Act: ‘Get that frickin’ thing...

How Much Should You Save For Retirement? More Than...

Saudi Arabia says it ‘won’t bear any responsibility’ for...

Next stop Kyiv – the battle on the capital’s...

Carjackings on the rise: How to protect yourself and...

As omicron spreads, Europe scrambles to shore up health...

Over a third of cancer cases in Scotland diagnosed...

Denmark votes in referendum on EU defense amid Ukraine...

Medvedev Wins Over Aussie Crowd in Win Over Dutch...

One dead, six injured after car crashes into Miami...

Biden raises concerns over air strikes in call with...

Covid cases in Scotland much higher than estimated, says...

Former Atlanta Mayor Won’t Rule Out Another Run for...