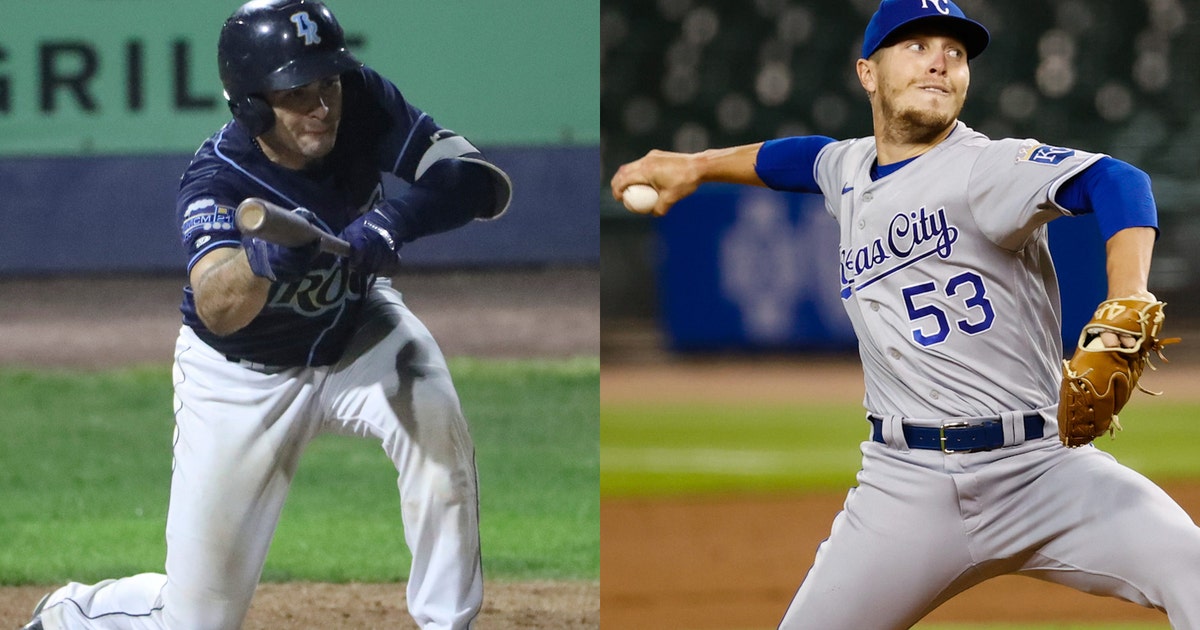 Rivero, 22, was added to the Royals’ 40-man roster this offseason. He did not play in 2020 due to the cancelation of the minor league season but spent most of the summer at the Royals’ alternate training site. In 265 career minor league games, the Venezuelan backstop has a .250 batting average with 12 homers and a .636 OPS.

27 members of the Royals’ 40-man roster are still in major league camp, as well as 13 non-roster invitees. The dwindling (but powerful) class of 2012

Why is violence flaring up in Israel and Gaza?

There has not been such a severe escalation of violence in the region since the Israel-Gaza war in 2014. Here's a look at why it's happening.
Read more

Hello. Today we look at how China is running its economy, the U.K.’s post-Brexit trade with the European Union and the earnings of American families.
Read more

An inside look at the US troop withdrawal from...

Health secretary Humza Yousaf says Scotland must not "drop our guard" as two cases of the Omicron variant are detected in England.
Read more

Call for Covid vaccination focus on under-30s in Wales

Nearly 120,000 people under 30 have still not taken up their first vaccine dose.
Read more

Fans of the TV show "Hannibal" took to Twitter Thursday to celebrate one of the 2021 Congressional Art Competition's winning entries, which depicts the main characters from the former NBC thriller. ...
Read more

A "shocked" teenager met Liverpool's Harvey Elliott after they were both injured playing football.
Read more

Police to resume search of Florida wilderness for fiance...

Police and FBI agents planned to resume their search of a swampy Florida wilderness for Gabby Petito's fiance on Wednesday, one day after the local coroner in Wyoming identified a body found there as the missing 22-year-old travel blogger.
Read more

Sarina Wiegman: New England boss on her vision for...

Sarina Wiegman discusses her vision for success after being introduced to the media for the first time in person as England manager.
Read more

WHO: Europe is only region with increasing COVID deaths

The World Health Organization says coronavirus deaths in Europe rose by 5% in the last week, making it the only region in the world where COVID-19 mortality increased
Read more

Officials said that third doses of vaccines from Moderna and Pfizer would be available starting Sept. 20.
Read more

After a century of central planning, Americans deserve health...

Rather than helping the American people, a century of federal laws has entrenched a public-private health care cartel running up prices and dictating terms. We deserve solutions to fire the gatekeepers and restore the direct doctor-patient relationship.
Read more

A new public service announcement from the National Police Association is urging people who believe they are being wrongly arrested to “Comply Now, Complain Later” in an effort to reduce police use-of-force risks.
Read more

Israel launched a series of heavy airstrikes early Monday at several locations of Gaza City as the conflict moved into its second week.
Read more

A Florida judge is the latest to block funding designed to help Black farmers pay off their longstanding USDA loans.
Read more

Do long trips to outer space cause brain damage?

AMD won’t nerf its GPUs to put off cryptocurrency...

Companies will be breaking the law if they delay or refuse refunds, warns the competition watchdog.
Read more

Big Tech Must Respect What Consumers Want in the...

Consumers today—particularly younger ones—expect and demand more. They don't just want to buy from a brand, they want to invest in it.
Read more

A former college professor was ordered held in jail on Tuesday on the suspicion that he set blazes near the massive Dixie Fire in California.Gary Stephen Maynard, 47, was arrested on Saturday and...
Read more

They blast the audit by the Cyber Ninjas firm launched by fellow Arizona Republicans.
Read more

Anthony Fauci, the U.S.’s top infectious-disease doctor, said he’s “strongly in favor” of speeding booster shots to people with weakened immune systems, a further sign of how the delta variant is shifting the strategies for curbing the pandemic. A third of Is…
Read more

A truck filled with 2,000kg of fireworks goes up in flames, injuring at least 17 people in Los Angeles.
Read more

Cathie Wood’s exchange-traded funds have sold some of their Tesla Inc. shares in the past two days, taking advantage of the recent rally as the stock climbs for the third week in a row.
Read more

A controversial Russian gas pipeline is still a few miles away from being completed, with construction set to end within the next month.
Read more

Colorado Parks and Wildlife officials are asking people to avoid fishing along part of the Colorado River due to warmer water...
Read more

Couple reunites just in time for their child’s birth...

President Biden reversed his predecessor's ban on travel from some Muslim majority countries just in time for a couple to be together for the birth of their son.
Read more

Cruz: McConaughey would be a ‘formidable’ candidate for Texas...

Who impressed and who fell short? Phil McNulty’s club-by-club...

A bicyclist was attacked by a 9-foot alligator at a park in Stuart, Florida, on Monday, according to authorities.
Read more

Edward Said: A Life Without Taste

A new biography of the author of "Orientalism" is written by an admirer, but no admirer should want you to read it. The post Edward Said: A Life Without Taste appeared first on The American Conservative.
Read more

THE LATEST WITH INFRASTRUCTURE There's no 'I' in team, but there sure is a 'ME':...
Read more

U.S. states and cities are turning to the municipal-bond market to raise money for new projects at the fastest pace in at least a decade, a sign of optimism as tax revenue improves with the reviving economy and as federal aid pours in.
Read more

Twitter turns 15: A look back at how the platform changed our livesgo.com
Read more

A massive cyberattack is spreading through Europe, affecting computer systems of government institutions, banks, airports and businesses. Ukraine was hit particularly hard, with officials calling this the worst such attack in the country's history. Cybersecur…
Read more

Republicans set to rebound big in 2022 midterms, unless…

Historic midterm trends, redistricting opportunities and recruitment could all power a very strong election, but there are countervailing issues.
Read more

Cloud spend is soaring – don’t fall into the...

Nearly a third of organizations' cloud investment is inefficient - how can they close the value gap?
Read more

Queen Elizabeth II and Prince Philip married in 1947 and remained together until his death. The queen has described her husband, who became Britain’s longest-serving consort, as her “strength and stay.”
Read more

One suspect has been arrested in connection with a mass shooting that left 14 people...
Read more

Yellen Warns U.S. Treasury to Run Out of Cash...

Man charged after allegedly stealing and reselling more than...

A Philadelphia-area man was charged with allegedly embezzling more than $3 million in tickets to the United States Open Championship over seven years, according to the US Attorneys Office for the Eastern District of Pennsylvania.
Read more

The Kansas City Chiefs and the family of Ariel Young have devised a plan to help support the 5-year-old girl who was left critically injured in a crash involving former coach Britt Reid, officials said in a statement.
Read more

Nagaenthran Dharmalingam was due to be hanged for trying to bring a small amount of drugs into Singapore.
Read more

A 61-year-old Asian man was left in critical condition after he was brutally thrown to the ground and kicked in the head in New York City.
Read more

"To crumble the speech I worked so hard for ... it broke my heart," Bryce Dershem told CBS News.
Read more

Conservative Legislators Call for Audits in 50 States in...

The letter does not cite any specific instances of proven or alleged corruption.
Read more

Amazon Fire Tablets And Kindles Are on Sale Right...

Need a cheap slate or ebook reader? These prices are some of the best we've seen outside of Prime Day.
Read more

Sievers 911 call: “Somebody killed her”

When Dr. Teresa Sievers didn't show up for work, her husband asked a friend to stop by their house to check on her. He found her body and called 911. "48 Hours" correspondent Erin Moriarty investigates the doctor's murder Saturday, Aug. 12 at 10 p.m. ET/PT …
Read more

Sigma’s super-telephoto lens could be the new zoom king...

Sigma's new super-telephoto lens for full-frame mirrorless cameras has landed – and it comes with a tempting price tag.
Read more

Majority of hate crime suspects not prosecuted by DOJ...

The majority of hate crimes between 2005 and 2019 were not prosecuted by the Department of Justice, a report...
Read more

A senior Hamas official predicted a ceasefire within days even as Israel and Gaza militants pursued their cross-border attacks into an 11th day on Thursday with Israeli warplanes carrying out new air strikes and Palestinians firing more rockets.
Read more

Rules barring female athletes with high levels of testosterone from participating in events between 400m and a mile are "here to stay", World Athletics president Sebastian Coe says.
Read more

An Australian researcher is trying to understand how disinformation flows through the Chinese diaspora.
Read more

Trezeguet: Aston Villa winger to have surgery on knee...

Aston Villa winger Trezeguet will have surgery on a knee injury he sustained in Saturday's 2-1 defeat by Liverpool.
Read more

Bike-sharing companies are back in the saddle after a brutal wipe-out. Survivors are now pedalling their way onto public markets in a fresh test of investor endurance.
Read more

Secretary of State Antony Blinken on Sunday suggested that the U.S. will not take punitive action on China for its handling of COVID-19, instead saying the government's focus "needs to be on building a strong system...
Read more

A leading infectious disease expert calls it "a defining moment." The U.S., EU, Britain and Brazil alone account for nearly half of the reported deaths.
Read more

Posthumous John le Carré novel to be published in...

A final novel by John le Carré will be published this fall, 10 month after the spy writer’s death
Read more

U.K. Brexit Minister David Frost said there is “still quite a big gap” with the European Union on the future of Northern Ireland, after the bloc presented proposals to fix issues with the post-Brexit settlement.
Read more

Texas hospital system first to require all employees get...

A Texas hospital system is the first in the nation to issue a COVID-19 vaccine mandate for staff, according to ...
Read more

Crime: Thieves, robbers and burglars to be fitted with GPS tags

CBS says 'The Talk' staying off air after racism talk