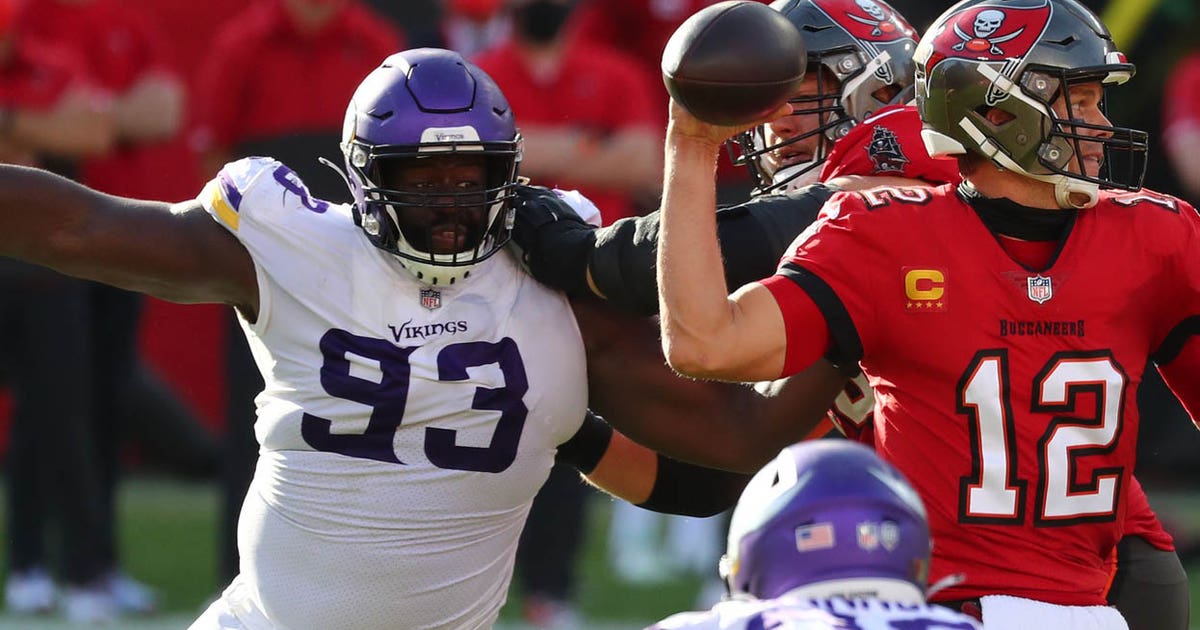 Minnesota will look a bit different in the trenches next season, as the Vikings terminated the contract of defensive tackle Shamar Stephen on Tuesday.

Stephen had one year left on his deal and wouldve been paid $5.1 million in 2021.

General manager Rick Spielman continues to rework the defensive line. On Monday night, the Vikings agreed to sign Dalvin Tomlinson to a two-year deal. Tomlinson hasnt missed a game since being selected in the second round in 2017, registering 207 tackles and 8.0 sacks for the New York Giants. ‘Wuhan, I Am Here’: Film follows volunteers in sealed city

GOP becoming a cult of know-nothings

The party is now in the process of carrying out purges of heretics who do not worship Trump or accept all the tenets of MAGA.
Read more

News executives from several top publications and outlets say the end of Donald Trump's presidency is a challenge for their organizations, while the sense of "crisis" in current events shows no signs of abating.Spe...
Read more

Cured: How mental illness was used as a tool...

A new film recalls the fight to overturn the US labelling of gay people as having a mental illness.
Read more

Glasgow Warriors prop Murray McCallum signs for Worcester on a deal from 1 January until the end of the 2022-23 season.
Read more

The region accounts for approximately 29% of global fatalities.
Read more

Climate change: Wales ‘needs to do twice as much’...

Road schemes are to be reviewed and a new law to tackle air pollution will be introduced next year.
Read more

Delta Air Lines Inc. will hire more than 1,000 pilots by next summer to support its expected recovery from the devastation of the pandemic and an expansion of its route network.
Read more

McCaul criticizes U.S. for leaving Afghan allies behind in...

Representative Michael McCaul, the ranking member of the House Foreign Affairs Committee, has been a vocal critic of the Biden administration's handling of the Afghanistan withdrawal. He spoke with CBSN's Lana Zak about why the U.S. is breaking promises by le…
Read more

Companies struggle with cybersecurity risks of a hybrid work...

More workers are returning to the office at least part-time after shifting to work from home when the pandemic hit, and the hybrid model is creating a new set of challenges for businesses. Laura Hoffner, a cybersecurity expert and chief of staff at Concentric…
Read more

The European Parliament has voted to lift the immunity of the former president of Spain’s Catalonia region, Carles Puigdemont and two of his associates, a move that could pave the way for their extradition
Read more

Murdaugh was charged with obtaining property by false pretenses in connection with an investigation into missing funds from a settlement involving the death of his longtime housekeeper.
Read more

U.S. to detail plan for global distribution of 80...

The United States will announce in the next two weeks how it will sell and distribute 80 million COVID-19 vaccine doses it has pledged globally, U.S. Secretary of State Antony Blinken said on Tuesday.
Read more

Services north of Newcastle are cancelled by LNER, and there is also disruption on other lines.
Read more

Medina Spirit could soon become the second horse in the Kentucky Derby's history to be disqualified over a failed drug test.
Read more

"We just decided that he wouldn't have wanted us not to and so we decided to do it in his honor," said Mildred Wilson, who lost her husband to a heart attack when he had COVID-19.
Read more

Lamar Jackson will join Johnny Unitas with this accomplishment...

Democrats gear up for major push to lower drug...

Democrats are planning a major push to lower drug prices as part of a coming infrastructure package, seeing an avenue to move forward on a long-held goal for the party.House Democratic leaders are intent on including a measure that would allow the...
Read more

The effort to draft Democratic Rep. Ruben Gallego went into overdrive after the Arizona senator closed the door on weakening the filibuster.
Read more

Visitors in Hawaii got up close and personal with a volcano and its bubbling lava. CBSN's Reena Ninan has more.
Read more

The charges stem from a February 2020 incident in Brunswick, Georgia.
Read more

An estimated 2,600 Latinos were killed by police or...

While the true scope of the impact of police brutality is difficult to quantify, a new report indicates that more than 2,600 Latinos were killed by police or died while in custody in recent years.
Read more

Missouri hospitals are reeling from an influx of COVID-19 patients and the surge has prompted one hospital to open up a second intensive care unit.
Read more

The number of wild boars traipsing around Europe has...

The number of wild boars has exploded across Europe, and some cities are working to curb their wild boar population. Wild boars traipsing through Italy, Poland and Germany have been caught on camera in recent years. "Even walking to school ... has become dang…
Read more

Why McConnell backed down

Only 41 percent of eligible voters cast ballots, but the procedure was approved despite the pope's disagreement, with only 3,265 voting against it.
Read more

Scarlett Johansson is suing the Walt Disney Co. over its streaming release of “Black Widow,” which she said breached her contract and deprived her of potential earnings
Read more

The Middle East, which had to a large extent returned to normal after a long period of closures, isn’t taking any chances with the omicron virus variant. After Israel identified one woman carrying the variant and possibly several more, it banned foreigners fr…
Read more

The Supreme Court’s plan to hear the Mississippi abortion...

What happens if Roe v. Wade is overturned? After Dobbs v. Jackson Women’s Health Organization is heard at the Supreme Court this fall, we may all find out.
Read more

Afghanistan: ‘We have won the war, America has lost’,...

A BBC team meets the Taliban, a group that clearly sees itself as Afghanistan's government-in-waiting.
Read more

All vaccinated participants with severe COVID-19 in CDC study...

Every vaccinated participant who endured serious COVID-19 outcomes as part of a new study of more than 1 million people had at least one risk factor that left them vulnerable, according to the Centers for Disease Co...
Read more

The Kid Laroi Knows The Value Of Collaboration

The Kid LAROI, the MTV Push artist for April 2021, was mentored by Juice WRLD and is now cranking out music with Justin Bieber and Omer Fedi. He tells MTV how it happened.
Read more

Replaying Mass Effect Is Good for My Mental Health

When I revisited the trilogy, I asked a researcher whether video game nostalgia is actually beneficial. Turns out, it is.
Read more

Poland Likely to Extend State of Emergency Near Belarus...

Polish Interior Minister Mariusz Kaminski wants to extend a state of emergency along the country’s eastern border for another 60 days, to help deal with a surge in arrivals of undocumented migrants from Belarus.
Read more

The arrival of the metaverse could bring with it a whole host of new risks, experts warn.
Read more

Former Texas Rep. Will Hurd (R) said on Tuesday that social media companies should be able to suspend people like former President Trump when they are found to have violated policies and terms of use.While appearin...
Read more

Georgia Gov. Brian Kemp (R) announced on Wednesday that he would push for a new law to loosen requirements on carrying a handgun in public.Kemp said on Wednesday he was looking forward to working...
Read more

Clarence Thomas awaits his chance to drive the conservative...

Twenty-nine years ago, less than a year after he had taken the bench, Justice Clarence Thomas joined a dissent calling the landmark opinion Roe v. Wade "plainly wrong" and an "erroneous constitutional decision." Over the years Thomas would say Roe had "no bas…
Read more

Conflicts over water are as old as history itself, but the massive Google data centers on the edge of a small Oregon town represent an emerging 21st century concern
Read more

Noni Madueke has not had as much media attention as some other young English talents but he is attracting interest from Europe's biggest clubs.
Read more

Wounded veterans from around the world are taking part in the final events of the Invictus Games in London, a tournament established for the first time this year by Britain's Prince Harry. Charlie D’Agata reports.
Read more

Build Back Better: Democrats Should Pass Reconciliation Bill for...

Biden admin reveals 60 finalists for $1B in economic...

The Right and Left Are Both Wrong on Immigration....

Getting immigration right is critical to our continued predominance. Great societies are by nature expansive.
Read more

Brooklyn Nets guard Kyrie Irving headed to the locker room after appearing to hurt his right ankle in the second quarter of Game 4 of his team's second-round playoff series with the Milwaukee Bucks.
Read more

The Latest: Qatar’s FM to discuss Afghanistan with Pakistan

Dozens of civilians have been killed in recent attacks as Syrian government forces push toward rebel-held Eastern Aleppo. Civilians who have managed to escape the attacks are being housed in makeshift shelters, though many are already filled to capacity. Debo…
Read more

Predicting Death Could Change the Value of a Life

New technology promises to forecast the length of your life. But for disabled people, measuring mortality can prove fatal.
Read more

Volvo to resume production at Virginia plant despite strike

Volvo Trucks North America says it will restart production at a plant in southwestern Virginia despite an ongoing strike and a lack of a labor deal between the company and a union representing nearly 3,000 workers
Read more

Michel Houellebecq Was Right About Covid

The controversial French novelist warned us about the banality of Covid-19 and its aftermath. The post Michel Houellebecq Was Right About Covid appeared first on The American Conservative.
Read more

The economic hit from excluding foreign spectators from attending the Tokyo Olympic Games is a price worth paying if it means the event can take place this year, according to economists.
Read more

Fifteen-year-old Ellis Murphy-Richards, from Kent, died after being hit by a train last September.
Read more

Plans for new national flagship to promote ‘best of...

The government plans to build a successor to Britannia in the UK, at a reported cost of about £200m.
Read more

David Henderson found guilty of endangering safety of an aircraft in which footballer and pilot died.
Read more

Jonny Bairstow strikes a magnificent century and Ben Stokes a brutal 99 in an emphatic England chase of 337 to beat India in the second ODI in Pune.
Read more

The FBI provided their final briefing on the Virginia Beach, Va., mass shooter on Wednesday, saying the 2019 attack that left 12 people dead was done partially due to "workplace grievances.""...
Read more

The police union in Portland, Oregon, has relocated its headquarters after its longtime office in the city’s Kenton neighborhood became the “target of vandalism and arson” over the past year.
Read more

This PS5 is one sweet piece of brass

Another new PS5 design has been made, and this time it's fashioned out of brass.
Read more