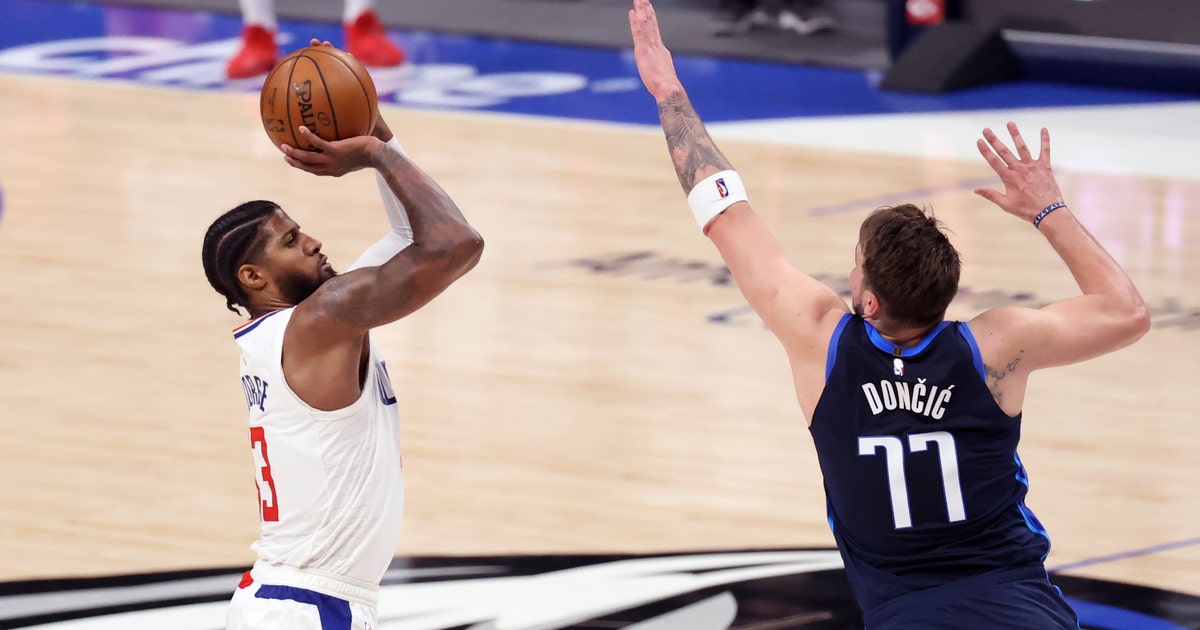 The Clippers answered a 51-point loss to Dallas early in the season and a 20-point defeat in New Orleans the night before while remaining the NBA’s only unbeaten team on the second night of back-to-backs. Los Angeles improved to 7-0 and tied Phoenix (7-1) for the most such victories.

Paul George scored 15 as seven Clippers finished in double figures. Ivica Zubac had 15 points and 11 rebounds. Nicolas Batum, who sat while Morris made his third start of the season, had a couple of big 3-pointers and scored 14. Reggie Jackson and Patrick Patterson scored 12 apiece.

The Clippers built leads early in both halves with better defense than they displayed a night earlier against the Pelicans, who shot the highest percentage in the NBA this season at 65.4%.

The Mavericks erased a 14-point first-quarter deficit in the second quarter. But they trailed 55-50 at halftime after leading by a NBA-record 50 points (77-27) at the half in their 124-73 victory in LA in December.

Dallas couldn’t do it again after falling behind by 12 early in the fourth. The Mavericks trailed 103-99 with three minutes remaining but couldn’t convert on two chances to get closer before Leonard got a three-point play off a putback.

In the final seconds of the third quarter, Doncic pleaded with officials to give him a shot at a four-point play when the 3-pointer he threw up while he was fouled on purpose went in. Officials said there was no shot.

After a discussion during a Dallas timeout, there was no challenge. The Mavericks had a throw-in, and Doncic hit two free throws after getting fouled again on a drive for an 85-78 deficit going to the fourth quarter.

Clippers: C Serge Ibaka sat out with lower back tightness after playing 23 minutes against the Pelicans. It’s just his second missed game of the season. … G Patrick Beverely isn’t on the three-game road trip because of right knee soreness. … Leonard had eight rebounds and seven assists as the Clippers outrebounded Dallas 46-33.

Mavericks: C Dwight Powell didn’t play because of an illness that coach Rick Carlisle said wasn’t related to COVID-19. Powell was among the Dallas players to miss games in January because of health and safety protocols. … Tim Hardaway scored 21 points. The song contest's Dutch venue would be half full and fans would need a negative Covid test.
Read more

Failure to reimburse the National Guard for its months-long deployment protecting the Capitol would be detrimental to the guard's readiness, top Pentagon leaders warned Thursday."It will impact their ability in the...
Read more

Snap up one of Shark’s best vacuum cleaners for...

Los Angeles Mayor Eric Garcetti condemned an alleged violent attack on Jewish diners by a mob of pro-Palestinian supporters Wednesday night that is being investigated as a possible hate crime.
Read more

Britney Spears wants to end her conservatorship. What happens...

Britney Spears' testimony could help lift some restrictions she's placed under her conservatorship with her father, Jamie Spears, but she faces an uphill battle
Read more

Democrats call on Biden to extend pause of student...

Democrats on Capitol Hill are urging President Joe Biden to extend the federal student loan payment moratorium by at least six months as the economy continues to rebound from the coronavirus pandemic.
Read more

Extreme punishments like executions and amputations will resume in Afghanistan, says the Taliban's head of prisons.
Read more

David Last died of head and chest injuries when his light aircraft crashed into the Irish Sea, an inquest hears.
Read more

Uber is launching a new feature that will track its drivers' speeds to look for unsafe behavior on the road. CBSN's Reena Ninan has the details.
Read more

Why Biden’s views on the Afghan terror attack make...

After the airport attack Biden spoke at the White House and continued to defend his withdrawal decision with a remix of specious arguments that he has made before, writes Peter Bergen.
Read more

Mali's constitutional court on Friday declared Assimi Goita, the colonel who led a military coup this week while serving as vice president, to be the new interim president.
Read more

Rugby union's rules make it hard, but former All Black Malakai Fekitoa has switched Test allegiance to represent his native Tonga. And he says more want to do the same.
Read more

Spirit Airlines canceled 261 flights Monday after having canceled 165 on Sunday, with hundreds of delays being also being reported on both days, ...
Read more

Naomi Osaka fined $15K for not talking to media...

Japanese tennis star Naomi Osaka was fined $15,000 after not talking to the media after winning her first match of the French Open, Roland Garros said in a ...
Read more

Your next Fitbit might be a stylish stack of...

Fitbit has registered a new patent for a ring that would measure blood oxygen saturation in a different way to a watch.
Read more

The Walmart PS5 restock yesterday marked a big change: it's getting easier to buy the Sony console, according to our PS5 tracker Matt Swider
Read more

Joe Clarke hits a half-century as Nottinghamshire enjoy the better of day one of their Division One clash against Somerset.
Read more

Clayton Kershaw on future: ‘No idea’

TV news stations targeted in latest round of cyberattacks:...

At least two television news stations had their operations disrupted Thursday by what appeared to be a targeted ransomware attack, according to media reports.
Read more

Kansas City Chiefs will pay for care of girl...

Troubadour Hayes Carll’s humor wears well, and droll observations fill his new album, “You Get It All,” serving as a counterweight to the serious topics he tackles
Read more

Our Favorite Paper Planners for Crossing Tasks off Your...

Digital tools are not always superior. We love good old-fashioned pen and paper for keeping on track.
Read more

Covid boosters will now be available to all adults ahead of the holiday season.
Read more

The University of California this week announced it plans to make "tranformational" changes to the school's campus safety practices by implementing new accountability measures to ensure the safety of all students.T...
Read more

Star of Breathless, Jean-Paul Belmondo was one of France's most popular actors.
Read more

WSJ Pro’s David Uberti looks at how momentum behind cyber legislation and federal mandates is pushing the Cybersecurity and Infrastructure Security Agency to become an enforcer.
Read more

Want the lowdown on European markets? In your inbox before the open, every day. Sign up here. Gazprom PJSC said its meeting European demand...
Read more

Dozens of protesters angry over firings and the poor economy of Oman have marched through a major city, marking a third day of demonstrations in the typically subdued sultanate
Read more

Father-of-two Maqsood Anwar was playing cricket when an ambulance had to be called to the club.
Read more

The Sutton Hoo Ship's Company is remaking the 88ft (27m) wooden vessel that was buried in Suffolk.
Read more

Biden to withdraw troops from Afghanistan but miss Trump...

President Biden will reportedly announce Wednesday that all U.S. combat troops will withdraw from Afghanistan by September 11, setting a formal date for the end of U.S. combat operations in the country while missing a dea...
Read more

Arsene Wenger says he is prepared to take a "gamble" with his proposals for a new international match calendar.
Read more

Senate Republicans have reportedly sent around a memo calling President Biden's ambitious infrastructure package a "slush fund," ahead of a bipartisan meeting with the president at the White House on Monday....
Read more

The Indonesian navy on Sunday said the 53 crewmembers aboard the submarine that went missing last week are dead.Last Wednesday, navy officials reported that they had ...
Read more

The 4th of July mattress sale event is just around the corner, so we've created this guide with the best early sales and everything else you need to know.
Read more

Hacker claims to have combined a Clubhouse scrape of billions of phone numbers with the user’s Facebook profiles.
Read more

Wraith: The Oblivion – Afterlife puts you into a...

Wraith: The Oblivion - Afterlife is VR game that knows how to deliver a delightfully frightening horror experience.
Read more

Used car prices for the Mitsubishi Mirage were up 49.9% in August as vehicle shortages continue to send values sky high.
Read more

Connor McDavid scored 2:42 into overtime for his league-leading 102nd point of the season and the Edmonton Oilers beat Montreal 4-3 in overtime Monday night as the Canadiens clinched the last playoff spot in the North Division.
Read more

Microsoft Defender should now do a better job of...

A new default policy will ensure all Office 365 users are covered with a useful set of security settings.
Read more

US pilot thanks British man who guaranteed a happy...

A U.S. Air Force officer has thanked a British photographer whose quick action ensured he landed safely after an engine in the aircraft he was piloting malfunctioned last week
Read more

Win a Sony Alpha ZV-E10 Camera and take your...

India Does a Turnaround on Trade Spurred by Post-Covid...

Robert MacIntyre takes on the world's best at the US Open this week with another career milestone in his sights.
Read more

Lollapalooza announced that it dropped hip-hop act DaBaby from performing his set at the popular music festival in the aftermath of homophobic remarks toward the LGBTQ community. "Lollapalooza wa...
Read more

Corporate networks are under attack. Here's how to protect yours from marauding cyber-criminals.
Read more

The battery materials unit of SK Innovation Co. said the global market for premium wet-type separators, a key component for electric vehicles, will run into a supply shortage in 2023 due to “explosive” growth.
Read more

Amazon announced Thursday that it is looking to hire 75,000 more employees across the U.S. and Canada.The e-commerce giant also said it will offer a $100 bonus to new hires who show proof of vaccination against COV...
Read more

Cases of Covid-19 in Bangladesh have surged since May, largely because of the Delta variant.
Read more

Tom Farrell, who led Dominion Energy for more than a decade and was a powerful force in Virginia business and politics, has died
Read more

A U.S. student who was studying in Russia was found dead early Saturday morning according to the Investigative Committee of Russia, NPR ...
Read more

The Lazarus heist: How North Korea almost pulled off...

In 2016 North Korean hackers planned a $1bn raid on Bangladesh's national bank and came within an inch of success. But how did they do it?
Read more

The endangered Mouflon sheep is one of many rare plant and animal species that have flourished inside a U.N. buffer zone that cuts across ethnically cleaved Cyprus
Read more

But many are unhappy about the traffic and the cost of living.
Read more

Former President Trump claimed exoneration after a watchdog report on Wednesday determined that his plans to walk through Lafayette Square did not influence the officers' decision to clear protesters out of it last ...
Read more

Warner Music teams up with Tencent to crack China

The US record label says the deal with China's tech giant will help make its artists "impossible to ignore".
Read more

Ammon Bundy won't wear mask in courthouse so judge has him arrested...