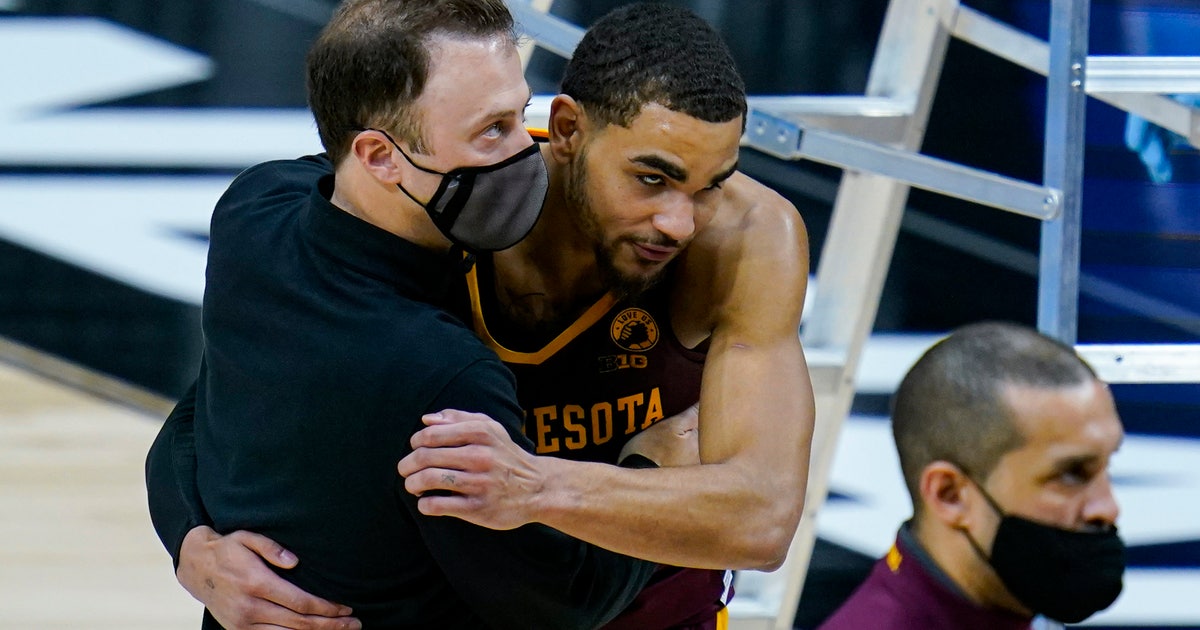 MINNEAPOLIS Minnesota fired Richard Pitino on Monday after the coach compiled a 54-96 regular-season record over eight years in the Big Ten and had only three conference finishes higher than 10th place.

The Gophers went 14-15 this season, dropping 11 of their last 14 games. They were 0-10 on the road, one of only three major conference teams in the country without a road win.

According to Pitino’s contract, the university will owe Pitino a $1.7 million buyout of his deal that had three years remaining. His base salary for 2020-21 was $2 million, below the median in the 14-team conference.

Hired at age 30 with one prior year of experience as a head coach at Florida International, Pitino guided the Gophers to an NIT championship in his first season. Only two NCAA Tournament appearances followed, though, in 2017 and 2019. Aaliyah's catalog will be available to stream for the first time ever, Spotify announced, beginning with chronological rollout dates on August 20.
Read more

The Organization for Economic Cooperation Development (OECD) announced Friday that 136 countries have agreed to a deal on a global minimum corporate tax of 15 percent.The deal is a top priorit...
Read more

The medical examiner performed an autopsy and said Plager didn’t sustain any injuries that would have been life-threatening.
Read more

Black Panther: ‘These costumes are a big deal’

President Trump extended his thoughts and prayers to those affected by Harvey and pledged the full support of the federal government to help them recover. Mr. Trump plans to visit the region Tuesday. See the full CBS News Special Report on the president's com…
Read more

The ACCC's latest report on the NBN brings good news for almost all speed tiers, and some hard stats on NBN 1000.
Read more

Sneak peek: Death of an Olympian

As Covid trends down, Fauci warns not to ‘declare...

“If you look at the history of the surges and the diminutions in cases over a period of time, they can bounce back,” the National Institute of Allergy and Infectious Diseases director said.
Read more

Howard University will name its College of Fine Arts...

Two decades ago, Chadwick Boseman graduated from Howard University with a degree from the College of Fine Arts. Now, that school will bear his name.
Read more

Hardly any of the leopard coins from 1344 have survived, an expert says.
Read more

G-7 nations gather to pledge 1B vaccine doses for...

Sen. Lindsey Graham (R-S.C.) personally investigated former President Trump's claims of electoral fraud in the days following the 2020 election and found them to be elementary and lacking in substance, according to a new...
Read more

The Biden administration is preparing to sanction around a dozen Russian individuals in retaliation for the misconduct including the SolarWinds hack, according to ...
Read more

These RTX laptop deals from Dell knock up to...

Dell has cut the price of some of its best RTX laptops, powered by Nvidia's best GPUs.
Read more

PUBG Mobile India deletes most of its posts on...

PUBG Mobile India launch has taken an interesting turn as the game just purged almost all of its post across all platforms.
Read more

LAPD opens investigation into allegations of abuse against T.I....

The Los Angeles Police Department has officially opened an investigation into rapper T.I. and his wife "Tiny" Harris, according to an LAPD spokesperson. The news comes after an anonymous woman filed a police report accusing the rapper and his wife of abuse, d…
Read more

‘One of the all-time greats’: Kevin Durant puts in...

On the back of two straight losses, without his fellow star Kyrie Irving and with a just returning from injury James Harden, Kevin Durant once again showed why he's one of the best in the NBA.
Read more

The Scottish firm says the Doghouse-branded boutique hotel will be in a former school in Market Street.
Read more

Finances and relationships in the pandemic: POLL

A new ABC News/Washington Post poll says Americans are more apt to say their family's finances have gotten worse rather than better in the pandemic.
Read more

U.S. Unsure Who Is on Planes Held in Afghanistan,...

"We will hold the Taliban to its pledge to let people freely depart Afghanistan," the State Department said Sunday.
Read more

Seattle reliever Hector Santiago was ejected after he was checked by the umpires as part of baseball's new sticky substance protocols, and the Mariners beat the Chicago White Sox 3-2 on Sunday in the resumption of a suspended game.
Read more

A Florida sheriff defended deputies amid accusations from Miya Marcano's family that they ignored evidence and failed to prioritize her disappearance.
Read more

Sen. Tim Scott (R-SC) said he was upset by how some social media users reacted to his rebuttal speech on behalf of Republicans following President Biden's address to a joint session of Congress on Wednesday evening....
Read more

Capcom eyes PC as its main gaming platform, and...

Capcom is reportedly looking towards PC as its main platform for future game releases, and that's an extremely good thing.
Read more

How Do We Conquer Vaccine Skeptics? We Listen

There’s a way to achieve the inoculation rates the world needs for herd immunity from Covid-19.
Read more

Several million people stand to save hundreds of dollars in health insurance costs, or more, under the Democratic coronavirus relief legislation on track to pass Congress
Read more

The former president had a dig at Biden's artwork which will be on display in New York.
Read more

Robert Redfield, the director of the Centers for Disease Control and Prevention during the Trump administration, said he thinks the novel coronavirus "evolved" in a lab to be more transmissible from human to human....
Read more

A campaign operative at the center of the 2018 North Carolina ballot fraud scandal pleaded guilty on Monday to illegally accepting Social Security benefits when he had been concealing other money that he had earned, ...
Read more

Donald Trump's attorney defended the ex-President's incendiary speech on January 6, saying he is protected under the First Amendment and had "absolute immunity" while he was President to contest the election, according to a court filing this week.
Read more

More than 1,800 giant pandas now live in the wild, and the species has been upgraded from "endangered" to "vulnerable."
Read more

Neeraj Seth on the Markets (Radio)

Officials from the Centers for Disease Control and Prevention (CDC) outlined new data on Wednesday that fou...
Read more

The Democratic governor failed to sit six feet apart from friends at an East Lansing bar and grill at the weekend.
Read more

One message wishes cancer upon the congresswoman and then hopes that her children die before her.
Read more

5 Indian soldiers killed in gunfight with rebels in...

Five Indian soldiers have been killed in a fierce gunbattle with militants fighting against Indian rule in the Himalayan region of Kashmir, as violence in the disputed region has increased in recent weeks
Read more

How does Ninja’s rival to the NutriBullet compare when it comes to creating smoothies and crushing nuts?
Read more

Fulham's players celebrate their goal in Saturday's 1-1 draw at Bristol City with Rhys Porter, a 13-year-old fan who was abused online.
Read more

Biden meets the press and the pandemic disappears

The president’s first news conference on Thursday was notable for what wasn’t asked.
Read more

Palm Beach County Attorney Dave Aronberg in a Monday interview with CNN said Florida Gov. Ron DeSantis could delay a possible extradition of former President Trump to New York, if there was an indictment, but that h...
Read more

Indian princes were often stereotyped as lazy hedonists, but they were serious political figures.
Read more

Biden to mark first 100 days with address to...

“America is on the move again,” Biden is expected to say tonight, after more than a year of crises tied to the coronavirus pandemic.
Read more

Family tribute to ‘amazing mum’ who died in motorbike...

Yvonne Motherwell's motorbike was in a collision with a BMW on the A706 near Wilsontown.
Read more

With all the press attention and hype about 5G, it’s natural to wonder when the real deal is arriving. What form will it take? And is it better to jump right in or take a 'wait and see' approach?
Read more

Singapore has warned it may need to reimpose Covid-19 restrictions if a new outbreak of the highly infectious Delta variant is not contained, putting at risk the city's shift towards living with the virus.
Read more

Protesters blocked a Miami expressway on Tuesday night to show support for those in Cuba fighting against the government.The Palmetto Expressway was blocked for hours with police redirecting traf...
Read more

David Komansky, a college dropout who joined Merrill Lynch & Co. as a stockbroker and expanded the firm around the globe as chairman...
Read more

In a deepening diplomatic rift with Spain, Morocco’s Foreign Ministry says the crisis between the two countries was “about trust and mutual respect that has been broken.”
Read more

Calls mount for video release in fatal shooting by...

An Atlanta charter school administrator was placed on leave this week after he was charged for allegedly having sex with a minor.Ereco Lee Maddox, 46, was arrested last month and faces charges including child moles...
Read more

Grim intelligence assessments did not match Biden’s assurances on...

Grim intelligence assessments of the Taliban's growing power and of a faltering Afghan military over the last several months did not match Biden's public assurances that Afghanistan would not fall quickly once U.S. forces...
Read more

Funeral to Praise Philip’s Courage and Support for Queen

Windsor, England (AP) -- Prince Philip will be remembered as a man of “courage, fortitude and faith” on Saturday, at a funeral that salutes both his service in the Royal Navy and his support for Queen Elizabeth II over three quarters of a century.
Read more

Obama to define his legacy in farewell speech

Millions will be watching President Obama's farewell address in Chicago Tuesday night. Dean Reynolds takes a look at the legacy that the president has left during his eight years in office.
Read more

The Biden administration on Friday said that it still needs more time to determine its position in a lawsuit over House Democrats' request for former President Trump's tax returns.The Democratic-led Ways and Means...
Read more

All of the victims were construction workers who had been building the new primary school.
Read more

John Dean, the former White House counsel to President Nixon, on Thursday, predicted that former President Trump would soon be indicted after reports have come out that his ex-lawyer Michael Cohen has met with the M...
Read more

Post-Covid America Isn’t Going to Be Anything Like the...

Hopes of a repeat of the post-influenza Roaring ’20s are understandable, but misunderstand the differences between then and now, says historian John M. Barry.
Read more

Texas officer says migrants told him they were released...

A Texas police officer said that a migrant family told him they were released by U.S. Customs and Border Patrol (CPB) agents due to positive COVID-19 tests. The La Joya Police Depart...
Read more

Hannah Lowther began singing on social media when she took a job in a supermarket during lockdown.
Read more

Authorities had infiltrated the An0m app used by criminals and monitored their messages for years.
Read more

Mandatory masks: ‘We worry people won’t shop with us’

Shopkeepers are concerned about enforcing mask-wearing and terrified they will have to close again.
Read more