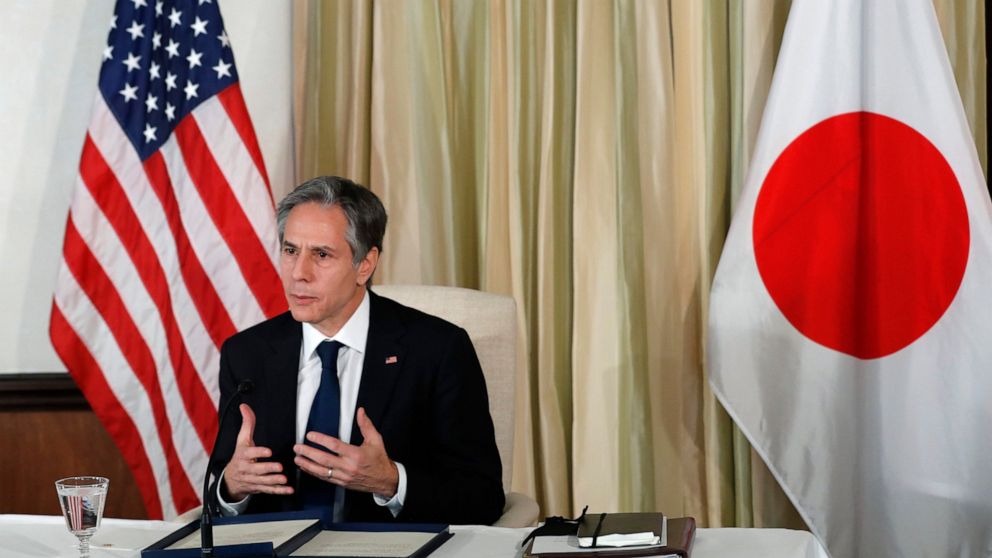 TOKYO — Defense and foreign ministers from the U.S. and Japan are to discuss their concern over China’s growing influence in the Indo-Pacific region as the Biden administration tries to reaffirm engagement with its key regional allies.

President Joe Biden’s decision to send his key ministers to Japan as their first overseas visit rather than hosting Japanese officials in Washington means a lot for Japan, which considers its alliance with the U.S. the cornerstone of its diplomatic and security policies.

That shows the U.S emphasis on the Japan-U.S. alliance, Motegi said in a parliamentary session Monday. He said China will be the topic he and Blinken discuss most, including how they can bolster their deterrence and response capability in answer to China.

Japan is in a delicate diplomatic situation because its economy, like those of other countries in the region, heavily depends on China.

But it considers Chinas escalating maritime activity in the region a security threat. Beijing has built militarized manmade islands in the South China Sea and is pressing its claim to virtually all of the seas key fisheries and waterways. Japan is concerned about Chinas claim to the Japanese-controlled Senkaku Islands, called Diaoyu in China, in the East China Sea and its increased activity in the disputed area.

China has denied it is expansionist and said it is only defending its territorial rights.

On the Biden administrations first Cabinet-level trip abroad, Blinken and Austin are expected to discuss the coronavirus pandemic and climate change, as well as the nuclear threat posed by North Korea and the situation in Myanmar after its military coup.

Japan and the U.S. are expected to reaffirm the importance of their three-way alliance with South Korea and may touch on the strained relations between Tokyo and Seoul over wartime compensation issues, but the issue is expected to be brought up in a subtle manner, Japanese officials said.

Later Tuesday, they will meet with Japanese Prime Minister Yoshihide Suga, who is expected to visit Washington sometime in the first half of April to meet with Biden in person becoming the first foreign leader to do so since he became president in January.

In a move meant to signal his intention for the U.S. to return to more engagement in the Asia-Pacific region, Biden on Friday held a first summit of the leaders from Australia, Japan, India and the U.S. known as the Quad virtually and emphasized Washingtons commitment to the region.

Blinken and Austin on Wednesday will head to South Korea, another key reginal ally.

Blinken will meet senior Chinese officials in Anchorage, Alaska, on their way back to Washington. Austin will go from Seoul to New Delhi for meetings with Indian leaders. Except for the name, Cannondale's mid-tier ebike is the perfect step-through commuter.
Read more

It actually happened: Gov. Andrew Cuomo resigned his office , stepping down in the face of a sexual harassment scandal and likely impeachment. His...
Read more

Iran believed to be responsible for attack on U.S....

Last week, five drones were launched from within Syria at al-Tanf, where approximately 200 U.S. troops are located.
Read more

The Oppo Find X3 Lite ticks all the boxes at this price point, even if it doesn't strictly shine anywhere.
Read more

Tom Philip has spoken about his experience with over-exercising and strict dieting to hide his poor mental health.
Read more

A Texas state lawmaker introduced a bill setting the minimum salary for teachers at $70,000 per year, saying "instead of just calling teachers 'heroes,' let's pay them l...
Read more

Pope calls migrant tragedy in Mediterranean ‘a moment of...

Pope Francis said Sunday that the assumed deaths of more than 130 migrants after their boat sank in the Mediterranean Sea last week was a "moment of shame" for all those who could have intervened to save those onboard....
Read more

Sky’s first TV range is one of the most intriguing concepts we’ve seen, putting the best TV interface in the business into an actual set.
Read more

Across the country, growing numbers of transplant programs have chosen to either bar patients who refuse to take the widely available covid vaccines from receiving transplants, or give them lower priority on crowded organ waitlists. Other programs, however, s…
Read more

The government must cut demand for flying and meat under plans to curb climate change, experts say.
Read more

The lawsuit alleges that aldermen in the northern Mississippi city of Horn Lake turned down an application to build the mosque due to prejudice and asks that the decision be reversed.
Read more

The reproductions will be on display until the beginning of September.
Read more

A federal judge on Wednesday vacated a nationwide freeze on evictions that was put in place by federal health officials to help cash-strapped renters remain in their homes during the pandemic.The ruling was a win f...
Read more

Priya Misra on the Markets (Radio)

Mike Richards is out as producer of ‘Jeopardy!’ and...

Mike Richards is out as executive producer of “Jeopardy!”
Read more

The Surface Pro is back, with its most meaningful design update in years – but it also comes with a price bump.
Read more

Whistleblowing has turned into a secular form of confession that keeps the limelight on one person instead of the movements already doing the work.
Read more

Your Evening Briefing: China and U.S. Make a New...

The House is expected to vote today to create a bipartisan commission to investigate the Jan. 6 attack on the Capitol. Follow here for the latest.
Read more

Top epidemiologist: Delta variant is ‘maybe the most contagious...

Spider-Man: No Way Home’s next trailer arrives this week...

Spider-Man: No Way Home's second trailer will be released this week – but some of us may have to wait for its arrival.
Read more

Manchester Originals match against Northern Superchargers in the women's Hundred is abandoned without a ball being bowled.
Read more

Shell and Norsk Hydro team up for green hydrogen...

It’s a genuine clash of the titans as two of the biggest, most expensive, and most extravagantly specced smartphones go head to head
Read more

A road that spans less than a mile in a small town about 100 miles northeast of Sacramento has prompted some in the community to call for a name change, according to a report.
Read more

The Sony HT-X8500 may be the best value soundbar you can buy.
Read more

The family of Secoriea Turner, the 8-year-old fatally shot during summer protests in Atlanta last year, is suing the city, alleging the mayor, police chief and a councilwoman permitted the "lawlessness, violence and vigilantism" that led to the girl's death.
Read more

US home construction dips 0.7% in October

Construction of new homes in the U.S. fell 0.7% in October, a sign that builders are still facing difficulties keeping up with demand as supply chain problems persist
Read more

Russia stands open for "the development of our ties on the basis of mutual respect and with the emphasis on cooperation in areas such as the Arctic issues, relations between regions and business ties where our interests objectively converge," said a spokeswom…
Read more

Amazon has opened a cashier-free supermarket in London, its first bricks and mortar expansion outside the U.S. as the company bets on strong demand for its contactless shops
Read more

Congressman André Carson of Indiana says he hopes Congress will hold "a series of hearings, and possibly a public hearing, in the very near future."
Read more

Who’d have thought that Windows 11’s biggest controversy would be due to emojis?
Read more

Open: This is Face the Nation, November 27

After the death of Fidel Castro, "Face the Nation" talks about the impact of the Cuban leader's passing on the U.S., with Sen. Marco Rubio, R-Florida, The Atlantic's Jeffrey Goldberg, and foreign affairs analyst Julia Sweig. Plus: Conversations on gratitude, …
Read more

Kelley Paul, the wife of Sen. Rand Paul (R-Ky.) says a Monday incident in which she discovered a white powdery substance in a piece of mail sent to their home was "pure terrorism.""It was a terri...
Read more

Why the GOP Should Support Public Higher Education

Our great public colleges and universities have created remarkable public goods for the nation. Recommitting to them is essential for the right. The post Why the GOP Should Support Public Higher Education appeared first on The American Conservative.
Read more

Many say watching George Floyd's final moments is traumatising - and so is the fight for racial justice.
Read more

A federal jury on Friday found that 3M Co failed to provide adequate safety warnings for its combat earplugs and that a U.S. Army veteran who said he developed tinnitus after using them sustained $1.7 million in damages, the second such verdict against the co…
Read more

Michael Williams was three days into the 860-mile run last year when it was cancelled due to Covid.
Read more

“In an age where this pandemic has made so painfully clear that no nation can wall itself off from borderless threats, we know that none of us can escape the worst that’s yet to come if we fail to seize this moment,” Biden said.
Read more

Solid majority say abortion should be illegal after first...

Manchester City and England captain Steph Houghton will miss a minimum of two-three weeks with an Achilles injury.
Read more

The FBI raided Detroit City Hall and the home of two city councilors on Wednesday as part of an ongoing corruption investigation."Really, at this point...
Read more

What’s next for Hillary Clinton?

Hillary Clinton says she has " no plans" to run for office again. While she may not have plans to run for elected office, she doesn't plan on doing nothing. Vanity Fair's William Cohan joins "Red & Blue" to break down Clinton's potential next steps -- and how…
Read more

Australia's softball team are the first international athletes to arrive in Japan for the Olympic Games as they fly into Tokyo.
Read more

"I got the COVID-19 vaccine today! My wing is feeling a little sore, but it'll give my body an extra protective boost that keeps me and others healthy," Big Bird's account tweeted.
Read more

‘Umbrella of stress’ on GM staff, 2 years after...

Iraq’s Health Ministry has warned of “dire consequences” ahead because citizens are not heeding coronavirus prevention measures, after the country reached a new high in daily infection rates
Read more

Newspaper headlines: ‘Battle to save 21 June’ and a...

Monday's papers react to a potential delay to the easing of Covid restrictions and the new royal baby.
Read more

The upcoming Poco M3 Pro will be powered by a MediaTek Dimensity chipset along with a high refresh rate display.
Read more

Owen Farrell says he would ‘love’ to help Marcus...

England captain Owen Farrell says he would "love" to help Marcus Smith's development as an international fly-half during the Autumn series.
Read more

Britain’s Brexit minister says post-Brexit relations between the U.K. and the European Union are likely to be “bumpy" for some time
Read more

Dolly Parton used profits from Whitney Houston’s ‘I Will...

Houston’s version of the song was featured in the movie ‘The Bodyguard’ and became one of her biggest hits.
Read more

Virginia man sentenced to 33 months for role in conspiracy with white...