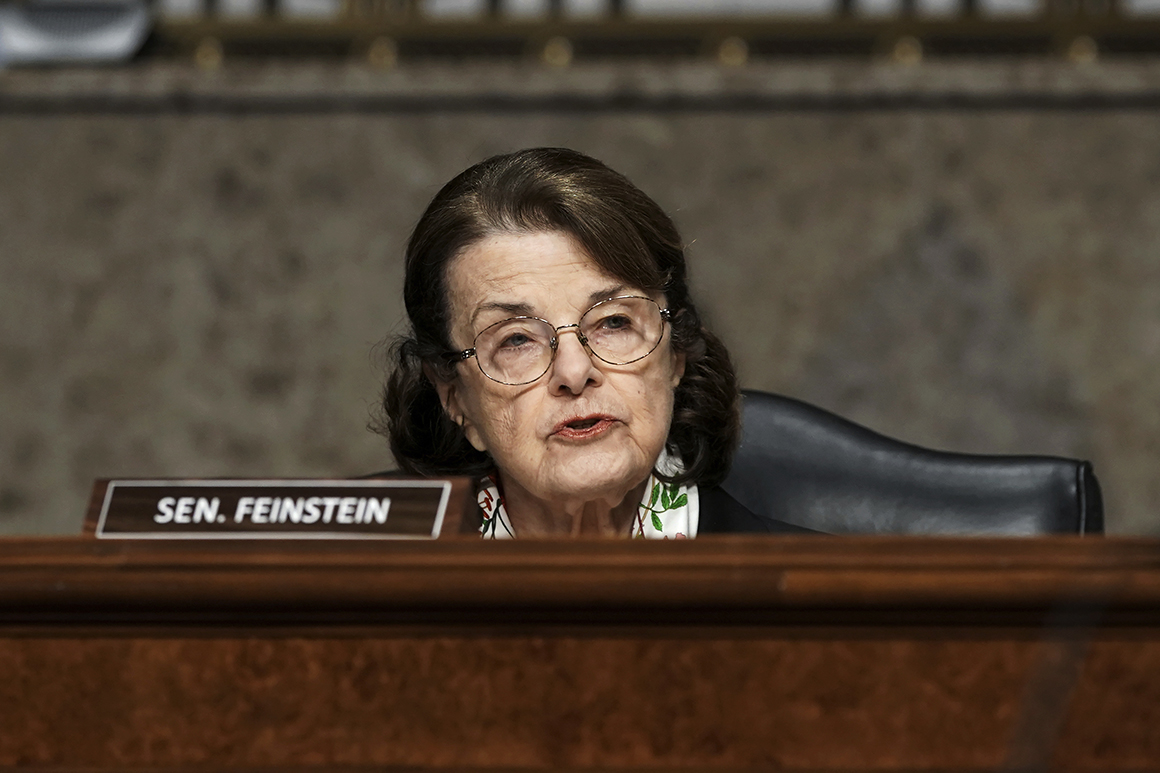 The senators comments to the Capitol press corps come after the governor told MSNBC in an interview Monday that he has multiple names in mind who could fill Feinsteins seat, should the 87-year-old lawmaker decide to retire before 2024 when she is next up for reelection.

In that same interview, Newsom also committed to select a Black woman to potentially replace Feistein. The answer is yes, he said.

The governor previously drew criticism from several womens groups and Black leaders last December, when he appointed California Secretary of State Alex Padilla to take over the Senate seat held by then-Vice President-elect Kamala Harris who was the chambers only Black woman.

Feinstein, the former top Democrat on the Senate Judiciary Committee, has also come under scrutiny in recent months from progressive activists and even some Senate colleagues, who were frustrated by her handling of Supreme Court Justice Amy Coney Barretts confirmation hearings last year.

But even before those proceedings began, POLITICO reported last September that Democrats had begun expressing concerns related to Feinsteins advanced age culminating with a damaging report in The New Yorker last December that raised further questions about her ability to legislate effectively.

Amid the public pressure, Feinstein ultimately announced last November that she would step down from her role as the Judiciary Committees top Democrat in the next Congress. Sen. Dick Durbin (D-Ill.) now leads the panel in addition to carrying out his duties as majority whip another point of contention within the Democratic caucus.

Newsom faces a recall campaign which, if successful, could allow a new Republican governor to select the senators replacement.

On Tuesday, Newsom acknowledged that the effort to remove him from office appears to have the requisite signatures to qualify for the ballot. Sudan’s army put the prime minister under house arrest and detained a number of his colleagues, people familiar with the matter said, as activists urged protests against what they said was a military attempt to seize power.
Read more

Secretary of Defense Lloyd Austin sought to assure China Thursday that the latest tri-lateral agreement between the U.S., U.K, and Australia is “not aimed at anyone.”
Read more

Southern Africa hoped it was through the worst of...

Patients are crammed into every corner of the hospital's emergency room ward. They lie on beds and gurneys, or sit slumped in wheelchairs. Many suck on oxygen, but nobody talks. Some die while waiting for a bed.
Read more

Robot mail: Russian Post teams up with Yandex to...

California inmate’s torture, beheading of cellmate was missed by...

Guards at a California prison reportedly didn’t notice that an inmate had reportedly tortured and decapitated his cellmate in 2019, having reported that both men were alive after making their overnight rounds.
Read more

Dell closing in on deal to sell Boomi cloud...

The Oakland Police Department will increase its presence amid a surge in violence that has included roving armed caravans, an uptick in homicides and brazen smash-and-grab burglaries while city leaders want to reverse planned budget cuts set to take effect ne…
Read more

Ukraine’s coronavirus infections and deaths have reached all-time highs for a second straight day, a growing challenge for the country where the share of vaccinated is one of Europe’s lowest
Read more

Naples residents failed to evacuate early and now must...

Naples, one of the jewels of Florida's Gulf Coast, is expected to be one of Irma's first stops as it rumbles towards Tampa. Some residents though failed to evacuate early and are reluctant to ride out the storm. CBS News' Jonathan Vigliotti reports.
Read more

Steam has finally updated its client with a bunch of user-friendly UI tweaks, and it's about time.
Read more

Nigeria: A fashion designer’s challenge to wear an Ankara...

In a bid to represent African culture, Chioma Inyang set out to wear an Ankara-styled gown on her wedding day.
Read more

The force seeks to reassure the public after the murder of Sarah Everard by a serving officer.
Read more

Cristiano Ronaldo's "unforgivable error" in extra-time against 10-man Porto in the Champions League proved decisive as Juventus was dumped out by the Portuguese side.
Read more

The doctor and nurse manage just 12 shots a day — six in the morning, six in the afternoon — visiting Rome's home-bound elderly to administer COVID-19 vaccines and, with them, the hope that Italy's most fragile might soon emerge from t
Read more

Hong Kong suspends transit flights from most of the...

Hong Kong will suspend for a month transit flights from around 150 countries and territories considered high risk because of the coronavirus, deepening the global financial hub's isolation.
Read more

New Splinter Cell will reportedly have a Halo Infinite-like...

Notable leaker Tom Henderson claims that the new Splinter Cell will have an open world similar to that of Halo Infinite.
Read more

Rio: At least 25 deaths during a police operation...

The pilot program may be adopted in Los Angeles County though the details have not yet been finalized.
Read more

Investors who love emerging markets but are spooked by China’s regulatory crackdown are pouring more money than ever into an ETF seemingly tailor-made for this moment.
Read more

It’s a question occupying the minds of employees who have worked from home the past year: Will they still be allowed to work remotely — at least some days — once the pandemic has faded
Read more

Who were the victims?

The gunman's mother, Maxine Davison, and three-year-old Sophie Martyn have been named among the dead.
Read more

Covid pass starts in England despite biggest rebellion of...

Over-18s must now prove they are double-jabbed, or have a recent negative test, to enter certain venues.
Read more

Canada Goose to end the use of all fur...

The Humane Society calls the decision a "momentous step in the demise of cruel fur fashion".
Read more

From Jail Cell to Boardroom: How Marginalized Women Get...

“We’re Momming Today” with authors Cheryl Miller and Dr. Shannon Deer about their work transitioning women from jail, addiction, poverty, and the sex trade to become business leaders and entrepreneurs. All it takes is a little money and a lot of faith.  Their…
Read more

He's the youngest person to die from injuries sustained during the crush.
Read more

Capt Sir Tom Moore's daughter urges anyone grieving a loved one at Christmas to reach out for help.
Read more

Two Huge Asteroids to Zip Past Earth This Week

Thankfully, the two space rocks are due to pass safely by our planet, though they are hefty in size.
Read more

The number of Americans seeking unemployment benefits rose last week from the lowest point of the pandemic, even as the job market appears to be rebounding on the strength of a reopened economy
Read more

Democrats in Colorado have condemned a Republican lawmaker for joking about lynching before saying a 18th century policy designating a slave as three-fifths of a person “was not impugning anybody’s humanity.”
Read more

Manchin fires back after Sanders pens op-ed in WV...

Sen. Bernie Sanders’ move to land an op-ed in Manchin’s backyard seems to have crossed the line for the West Virginia senator.
Read more

Brazilian President Jair Bolsonaro is considering replacing the country's health minister, which would be the fourth time the position has changed hands since the COVID-19 pandemic began....
Read more

Samsung Galaxy S22 series might bring 65W fast charging which would put it in direct contention with the competition that is out there.
Read more

Hundreds of thousands of Android users infected by banking...

Tokyo Olympics still undecided on fans — or no...

The question of allowing any fans into Tokyo Olympic venues is still being debated with a decision unlikely to be announced before the end of the month.
Read more

Logitech has launched the G335 Wired Gaming Headset in India that weighs just 240grams and is priced at Rs 6,795.
Read more

Nhial Deng, a South Sudanese refugee, shares his experience of having to flee from his village at 11 years old and sheds light on the crisis displaced people face, particularly as chaos continues to unfold in Afghanistan, and how everyone can do something to …
Read more

Good Wednesday morning! Uh oh. Back when Gov. Murphy faced criticism over capacity restrictions and mask mandates, he could point to CDC guidance to...
Read more

Warren Buffett is not going to get involved in labor disputes of any company he owns, despite a request from Senator Bernie Sanders. The...
Read more

The cruise line is also seeking a preliminary injunction that would it allow to begin checking passengers' vaccination status, thus allowing the company's ships to set sail in compliance with CDC guidelines.
Read more

A father allegedly shot his own son to death on Friday in what might have been the last murder in New York City in 2021.
Read more

Hurricane Sam, a Category 4 storm, is picking up speed as it sweeps north over the Atlantic, but will likely avoid a US landfall, according to ...
Read more

"They wanted to shut me up," said Nevada Assemblywoman Annie Black. "I don't think I did anything wrong."
Read more

Connie McLaughlin and Kenny Macintyre kickstart your weekend live from the Edinburgh Festival with a great mix of football, fun and fine tunes.
Read more

Brady Mistic says he "held his open and empty hands up in an obvious effort to show he meant no harm" – but the officers ignored him and tackled him.
Read more

China's rubber-stamp parliament on Thursday overwhelmingly endorsed a proposal on "improving the electoral system" of Hong Kong, further restricting the ability of people in the city to freely elect their leaders.
Read more

Democrats lack the votes for a nuclear strike on the filibuster just yet. But Tuesday’s vote awarded them something they needed in their arsenal to alter the filibuster: a failed procedural vote.
Read more

President Joe Biden on Thursday criticized Republican lawmakers who have touted parts of the Covid-19 economic relief law that benefit their constituents despite having voted against the law, saying: "Some people have no shame."
Read more

Man who left woman to die in suitcase sentenced...

The FIMI X8 Mini is a compact, folding drone that shoots 4K video. But is it a match for the class-leading DJI Mini 2?
Read more

Microsoft says it blocked spying on rights activists, others

Microsoft says it's blocked tools developed by an Israeli hacker-for-hire company that were used to spy on more than 100 people around the world, including politicians, human rights activists, journalists, academics and political dissidents
Read more

El Salvador’s President Nayib Bukele is probably the only head of state in the world who uses public funds to trade Bitcoin with his phone.
Read more

After several humbling losses to the West Division leader, the Minnesota Wild sent quite the message to the Colorado Avalanche in their last of eight regular-season matchups.
Read more

Smoking Headed for Extinction in U.S. by 2050, Report Says

Surviving Restaurateurs With Cash Are Ready To Pounce (Radio)