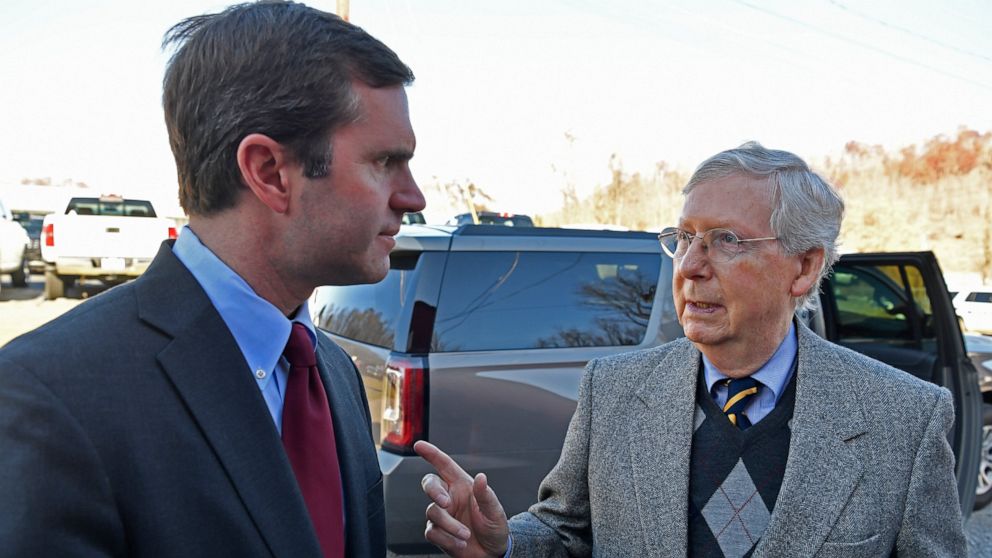 FRANKFORT, Ky — Kentucky lawmakers passed a bill Tuesday that would remove Democratic Gov. Andy Beshears ability to appoint a member of his own party to fill a vacancy in the U.S. Senate if one occurred.

Current state law allows the governor to appoint someone to fill the seat until the next regular election of the U.S. House of Representatives, which happens every two years. But under the bill approved Tuesday by the state House of Representatives, the governor would have to choose from a three-name list provided by leaders from the same party as the senator who formerly held the seat. Since Republicans currently hold both of Kentucky’s Senate seats, GOP leaders would make the nominations.

A veto is likely to be overridden by Republican supermajorities in both the House and Senate.

McConnell, the state’s senior senator, won reelection last year and said he has no intention of leaving the Senate. McConnell has said the measure would improve the process of filling a vacancy.

It would also ensure Kentucky voters have the ability to choose who they think will best represent them in a timely manner, as opposed to leaving that decision to the governor, regardless of party, the 79-year-old senator said in a statement March 12.

When you win elections, which the Governor did, part of that power that goes to him is appointing seats to the U.S. Senate, she said. “Again, this is what people hate about politics, changing the rules because the person that was elected to the executive office was not in the majoritys party.

Any vacancy in the evenly split U.S. Senate would be of enormous consequence. Democrats have the slim edge in the 50-50 chamber because Vice President Kamala Harris is a tie-breaking vote.

Hudspeth Blackburn is a corps member for the Associated Press/Report for America Statehouse News Initiative. Report for America is a nonprofit national service program that places journalists in local newsrooms to report on undercovered issues. EXCLUSIVE China to order Tencent Music to give up...

China's antitrust regulator is poised to order the music streaming arm of Tencent Holdings Ltd (0700.HK) to give up exclusive rights to music labels, two people with direct knowledge of t…
Read more

Westminster Dog Show: Time, schedule and what you need...

For many people, it's just another cute dog show, but for the serious dog lovers, the 145th Westminster Kennel Club Dog Show is no joke.
Read more

The Washington Post was slammed on Monday for a report on the apparent "evolution" prominent Democrats have made when it comes to voter ID laws.
Read more

SolarWinds hack may have been more damaging than previously...

Starbucks on Monday unveiled plans to eliminate disposable cups from its South Korea locations by 2025 as part of its long-term efforts to transition to reusable packaging and more sustainable business practices. The coffeehouse chain said in a...
Read more

Texas board recommends posthumous pardon for George Floyd in...

A Texas pardon board on Monday recommended posthumous clemency for George Floyd for a 2004 drug conviction in Houston for which he spent 10 months in jail.
Read more

The House on Wednesday approved a Jan. 6 Capitol assault commission bill over the opposition of Republican leaders.
Read more

What does GOP tax bill mean for homeowners?

Regulators are now left to chart a path forward despite limited, and sometimes confusing, data on vaccines' effectiveness over time.
Read more

Entertainment reporter Catt Sadler posted a warning about COVID-19 to Instagram on Wednesday, urging her vaccinated followers not to get too comfortable.The fully vaccinated former E! News correspondent shared that...
Read more

Tom Barrack and the influence he had in Trump’s...

A cafe in Scotland's capital where author J
Read more

Former first lady Michelle Obama in a new interview is praising the Black Lives Matter movement and opening up about the concerns that she has for her two daughters. ...
Read more

A fan-made texture pack makes Minecraft look like it's made from Lego, here's how you can install it for yourself.
Read more

Voting rights advocates eager for Biden to use bully...

President Biden has mostly worked behind closed doors as the White House maps out its next steps on voting rights, but advocates are growing impatient as they warn time is running out to spotlight the issue before restrictive state laws and new maps...
Read more

Government must provide clarity on going to football games,...

It comes as an NHS boss urges fans to go to a stadium to get vaccinated rather than attend a match.
Read more

Peter Wright and Michael Smith will meet in the final of the PDC World Darts Championship at Alexandra Palace in London.
Read more

A whistleblower victim provided new documents to POLITICO and is alleging retaliation for speaking out.
Read more

It comes days after he asked his Twitter followers whether he should sell 10% of his stake.
Read more

In just 140 characters, President-Elect Donald Trump signaled a major shift in U.S. foreign policy on Thursday. Trump tweeted that the U.S. "must greatly strengthen and expand its nuclear capability until such times as the world comes to its senses regarding …
Read more

Pfizer Inc. plans to request U.S. emergency authorization in August for a third booster dose of its vaccine, based on early data showing that it can sharply increase immune protection against the coronavirus. Meantime, growing concern that vaccines deployed a…
Read more

The nation's second-largest school district voted in favor of a coronavirus vaccine mandate for all eligible students ages 12 and up. CBS News' Jonathan Vigliotti reports on the decision in Los Angeles. Then Dr. Bhavna Lall, a clinical assistant professor at …
Read more

Zach Carter on the Real Story of Weimar Hyperinflation

A new report from the American Academy of Pediatrics and the Children's Hospital Associa...
Read more

Abba: Why the UK gave the Swedish band ‘nul...

Björn Ulvaeus on the Swedish band's song contest win on British soil, and the future of streaming.
Read more

Arizona planning to use Nazi-era gas for death row...

Reports that Arizona will revive its gas chamber executions with a method linked to the Nazis has advocates worried.
Read more

We learned the value of telehealth during the pandemic:...

On The Money: Biden asks Congress to extend eviction...

Nevada Gov. Steve Sisolak has signed legislation to make the state the first in the U.S. to ban certain kinds of grass
Read more

The epicenter of the earthquake, March 20.  Source: USGS Japan issued a tsunami advisory for Miyagi prefecture in the countrys northeast after a magnitude 7.2...
Read more

American father and son admit to Tokyo court they...

An American father and son on Monday in a Tokyo court admitted to charges they illegally helped former Nissan Motor Co Ltd (7201.T) Chairman Carlos Ghosn flee Japan at the end of 2019 hidden in a box and on a private jet, Kyodo newswire reported.
Read more

Trump’s Ban Shows the Facebook Oversight Board Is Kind...

Facebook has agreed to follow some of the board’s non-binding recommendations regarding the Donald Trump suspension. That’s progress.
Read more

The Taliban fighters who rolled into Afghanistan's capital and other cities in recent days appear awestruck by the towering apartment blocks, modern office buildings and shopping malls
Read more

Leaks on Twitter suggest that the OnePlus Nord 2 smartphone might launch in the last 10 days of July, possibly on July 24.
Read more

Fox Corp. is joining the list of investors and businesses pumping big money into nonfungible tokens, or NFTs, a type of digital file that can be bought and sold around creative works like pictures, music and videos.
Read more

Paul Traynor is an ordained minister but he was once caught a cycle of crime, drugs and violence.
Read more

Nikita Khrushchev on Face the Nation in 1957

Face the Nation brought viewers inside the Kremlin in Moscow on June 2, 1957 for an interview with the Soviet leader.
Read more

Tiziana Cantone: Italian woman’s body to be exhumed in...

Tiziana Cantone was thought to have taken her life in 2016 after a video of her having sex went viral.
Read more

Watch highlights as St Albans come out on top as surprise winners to beat Forest Green 3-2 in an exhilarating game at Clarence Park.
Read more

We talked in February about a securities-fraud lawsuit against Goldman Sachs Group Inc. that was going all the way to the Supreme Court. The issue is that, before the 2008 global financial crisis, Goldman had gone around saying things like “our clients’ inte…
Read more

Anthony from “Opie and Anthony” charged with assault

Anthony Cumia, former host of the radio show "Opie and Anthony" is arrested and charged with strangulation and assault
Read more

"He has no clue as to what needs to be done for our Country, was a weak and ineffective leader, and spends all of his time fighting Republicans as opposed to Democrats who are destroying our Country," Trump said in a statement.
Read more

Philipp Grubauer made 18 saves and Gabriel Landeskog scored the go-ahead goal in the second period as the Colorado Avalanche completed a four-game sweep of the St. Louis Blues with a 5-2 win Sunday in Game 4 of the West Division series.
Read more

OPINION: The former president and his imitators are ripping off their own supporters.
Read more

The cap on the federal deduction for state and local taxes would jump more than sevenfold under the latest Democratic tax-and-spending proposal heading to the House floor as soon as Thursday pending a committee review.
Read more

A judge on Monday said that Kobe Bryant's widow must turn over her private therapy records dating back to 2010 to Los Angeles County, as prosecutors say the records are necessary for their defense again...
Read more

Your Garmin watch could get some great new training...

Garmin is rolling out a big update for several watches in the Forerunner series, adding new training tools.
Read more

How Mike Pence’s inner circle could be the key...

The fundamental question before the January 6 committee is whether they will ever, really, get to the bottom of what former President Donald Trump said and did that day -- and in the days leading up the riot at the US Capitol.
Read more

Biden was relaxed, funny, in command. But that won’t...

President Joe Biden is facing the most difficult period of his still-young presidency, but you wouldn't have known it watching the relaxed, optimistic, joke-cracking politician who took questions at the CNN town hall on Thursday night, writes Frida Ghitis.
Read more

A 'muscular unionism' approach by Boris Johnson has created a stand off between Westminster and Holyrood, according to Gordon Brown.
Read more

WHO: Omicron could spread faster but it’s still not...

Britney Spears is explaining why she's been baring all recently.
Read more

"She should have minded her own business." one Reddit user exclaimed.
Read more