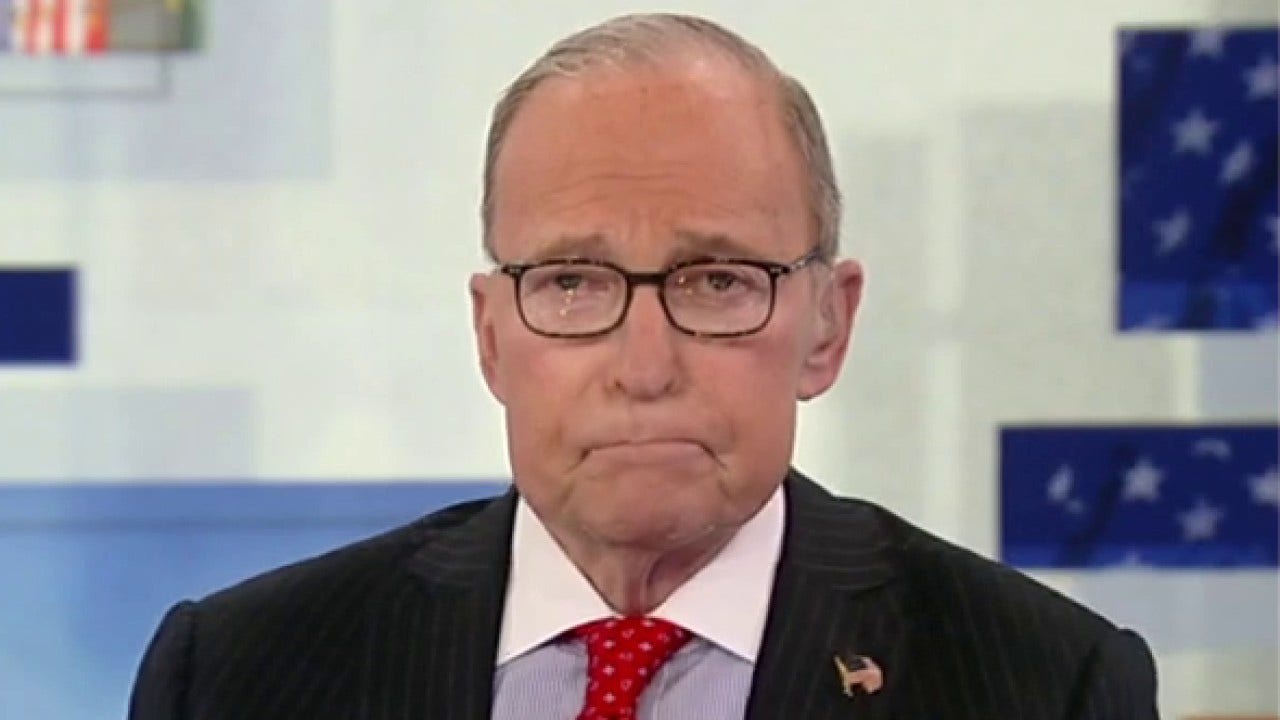 The Biden administration is pushing to spend big on infrastructure as an addition to economic stimulus, but FOX Business’ “Kudlow” host Larry Kudlow said the plan is disguised as a tactic to retract former president Donald Trumps tax cuts.

Kudlow explained that Democrats are not only showing their continued hatred for Trump, but also setting up infrastructure spending to hide implementation of the Green New Deal.

KUDLOW: “The Democrats have set up infrastructure as a Trojan horse to hide their real goal, which is the Green New Deal And as I’ve argued many times, the Green New Deal is going to destroy fracking and fossil fuels and our energy independence. It is going to kill millions of blue-collar jobs, smash untold small businesses around the country that depend on fracking and oil and natural gas development. Climate change is an issue, but there is no existential threat.

“However, all manner of electricity and gasoline and other energy sources will see much higher prices and much lower supplies under this. Middle-class motorists and homeowners will get slammed. That’s just the first Trojan horse in the infrastructure story.

“The second Trojan horse is that an alleged infrastructure bill is actually a Trojan horse to repeal President Trump’s tax cuts. Manic-obsessive left-wing ideologues who are fanatical about climate change are equally fanatical about hating former President Trump and anything to do with him. So we got a lot of fact-free arguments. They haul out the usual left-wing claims of tax cuts for the rich, causing greater inequality all at the expense of the poor.” NYC’s Vaccine Mandate for Teachers Is Cleared by State...

New York City’s requirement for teachers to be vaccinated was cleared by a state judge following a legal challenge from labor unions.
Read more

There's no way to get prepared for this year's Cyber Monday gaming laptop deals than with our guide - including key dates, what to expect, and more.
Read more

With offices opening up and big annual sales just around the corner, you'd be wise to keep that cash in your pocket – at least for a few months.
Read more

‘Being an Afghan refugee inspired my fashion designs’

Parasto recently won a regional award that has led to an internship with high street brand Next.
Read more

No charges for Colorado officer who killed ‘hero’ who...

Authorities in Colorado declined to file charges against a police officer who fatally shot a bystander hailed as a hero for stopping a gunman armed with a rifle, prosecutors said Monday.
Read more

Oval Invincibles keep themselves in the hunt in men's Hundred by holding their nerve to beat local rivals London Spirit by two wickets.
Read more

Hurricane watch in effect for New Orleans as Ida...

"By Saturday evening, everyone should be in the location where they intend to ride out the storm," said Louisiana's governor.
Read more

Police have named Dylann Roof as the suspect in the shooting at a historic black church in Charleston that killed nine. Former FBI Assistant Director Ron Hosko joins CBSN to discuss.
Read more

Venezuela Is Resurrecting Its Oil Fields With Backpacks of...

Where Are Those Shoes You Ordered? Check the Ocean...

More containers have fallen off ships in the past four months than are typically lost in a year. Blame heavy traffic and rolling waves.
Read more

Biden and Putin expected to make headway on nuclear...

Washington and Moscow appear to converge on the need to resume arms control negotiations.
Read more

A woman crashed her car into a freezing river....

A FedEx Express driver is being hailed a hero by police after he jumped into freezing water to save a woman who had crashed her car.
Read more

President Biden's sprawling $6 trillion budget unveiled Friday does not include the controversial Hyde Amendment, delivering on a campaign promise to try to scrap the ban on federal funding for abortions.The decisi...
Read more

More than a third of Australia’s largest listed companies have poor modern slavery disclosures, indicating they don’t understand the risks in their supply chains, according to a new report.
Read more

The Taliban offensive is getting closer to Kabul, displacing hundreds and thousands of people as it sweeps across Afghanistan. What can other countries do to help avoid more suffering? Also in the programme: Russia expels the BBC's Moscow Correspondent Sara…
Read more

The president spoke to members of the Congressional Hispanic Caucus on Tuesday and pledged to lean in to immigration reform.
Read more

How new regulations from Washington could lead to a...

Will Washington’s leaders stifle that spirit to the detriment of our economy and our reputation as a global leader in innovation? Or will they nourish that spirit to usher in the next chapter of the digital revolution?
Read more

COVID-19: Ways you can protect your young child who...

There are many steps parents can take to protect their young children from COVID-19 while they are too small to receive the vaccine.
Read more

Kieran Trippier is set for a recall to the starting line-up for England's Euro 2020 final against Italy on Sunday.
Read more

Police Tether Car Used By Suspects in Killing of...

Information on the suspects has yet to be released and no arrests have been made despite police releasing photos captured from surveillance footage.
Read more

Police departments stand in solidarity with Capitol Police after...

Police departments across the United States expressed their support for the U.S. Capitol Police after the force lost another one of its members Friday.The departments shared messages of solidarity on Twitter after...
Read more

The firm had said unpaid breaks would be temporary but trade remains "significantly below" pre-Covid levels.
Read more

Ahead of meeting with Putin, Biden agrees U.S.-Russian relations...

At a press conference at a G-7 meeting, President Joe Biden said he will push Russian President Vladimir Putin to crack down on cybercriminals when they meet.
Read more

Caroline Kennedy discusses her job and the issues she faces in it as ambassador to Japan. Norah O’Donnell reports on Sunday, April 12 at 7 p.m. ET/PT.
Read more

Whether dribbling a basketball or identifying obscure Latin or Greek roots, Zaila Avant-garde doesn't show much stress. Now she has become the first African American winner in the 96-year history of the Scripps National Spelling Bee.
Read more

It’s Pretty Easy to Get World Leaders on the...

UFO experts on intelligence report: ‘Whatever this is, it...

Even if the UFOs that hundreds of military pilots and thousands of everyday citizens have spotted are extraterrestrial in origin, they are likely far too complex for us to understand, UFO experts told Fox News in the wake of an inconclusive report released Fr…
Read more

Author Janet Evanovich has sold more than 75 million books. Evanovich joins the "CBS This Morning" co-hosts to reveal her secrets to writing, collaborating with author and television producer Lee Goldberg, and her new novel, "The Chase."
Read more

Fan runs on court, gets tackled during 76ers-Wizards playoff...

The man ran on the court and touched the backboard​ before being tackled by a security guard.
Read more

Women’s FA Cup final: ‘We’ve got another level to...

Chelsea manager Emma Hayes believes her team have not yet reached the peak of their powers, ahead of their Women's FA Cup final against Arsenal.
Read more

About a third of Mexicans show exposure to coronavirus

As many as one-third of Mexicans may have been exposed to the coronavirus by the end of 2020, according to a study of random blood samples taken between February and December
Read more

Xbox Game Pass on PC is getting more than...

The two straw goats of Gavle, Sweden’s most endangered Christmas decorations, have gone up in flames after surviving nearly a month on a downtown square
Read more

Mat George, co-host of the hit podcast "She Rates Dogs," was killed in a hit-and-run incident in Los Angeles this weekend, his colleague Michaela Okland confirmed.Okland, who co-hosts the podcast alongside George,...
Read more

Photos of the Week: Afghanistan, an earthquake in Haiti...

A construction worker sifts through debris on Aug. 15 from a landslide caused by heavy rain in Kanzaki...
Read more

Workers have removed the remains of Confederate Gen. Nathan Bedford Forrest and his wife from a Tennessee park, marking another step in the process of moving their bodies out of Memphis and to a museum hundreds of miles away
Read more

Russian rock musician, poet and actor Pyotr Mamonov has died at the age of 70
Read more

Who’d have thought that Windows 11’s biggest controversy would be due to emojis?
Read more

The U.S. Capitol Police confirmed Friday evening that a second officer who was injured in Friday's car attack in Washington, D.C., is in stable condition and is not facing life-threatening injuries."UPDATE: The oth...
Read more

Intoxicated Man Breaks Into Milwaukee Airbnb, Gets Discovered By...

"This silly guy found the one Airbnb in all of downtown Milwaukee, Wisconsin, loaded with cops," one of the deputies said in a TikTok clip about the incident.
Read more

Boebert apologizes to Muslims as Dems call on GOP...

Bryson DeChambeau lets a four-shot lead slip to end the third round of the BMW Championship tied with Patrick Cantlay.
Read more

The senators negotiating a $550 billion infrastructure package finished the text of their legislation Sunday, ramping up a Senate debate that will lead to likely passage this week.
Read more

House votes on a bipartisan infrastructure bill and a larger $3.5 trillion spending plan dominated the political talk shows on Sunday morning.Top Democrats acknowledged that the spending plan, which they hope to pa...
Read more

China’s export growth slowed slightly in October to 27.1 percent over a year ago, while imports were up 20.6 percent, the customs administration said Sunday
Read more

The governing body of Oxford University’s Oriel College says a controversial statue of Victorian imperialist Cecil Rhodes will not be taken down because of “regulatory and financial challenges.”
Read more

The usernames, cracked passwords and email addresses of the mixtape hosting service DatPiff have been leaked online.
Read more

Asian shares are rising as investor sentiment receives a big boost from the rally last week on Wall Street, despite worries about the more contagious coronavirus delta variant not only in the region but across the world
Read more

Five months after President Joe Biden declared the U.S. to be on the verge of defeating Covid-19, the virus threatens a winter resurgence across the country.
Read more

Security personnel were called in to remove several members after violence erupted on the parliament floor.
Read more

Baystate Business: The Head of the Charles Regatta (Radio)

President Biden on Thursday aggressively lobbied for vaccine requirements as an effective tool to end the pandemic, arguing mandates had become necessary to turn the corner on the pandemic."These requirements work....
Read more

Ethiopia’s government says its military could re-enter the capital of its embattled Tigray region within weeks, calling into question the unilateral cease-fire it declared in Tigray just days ago
Read more

House panel to hold hearing on violence against Asian Americans