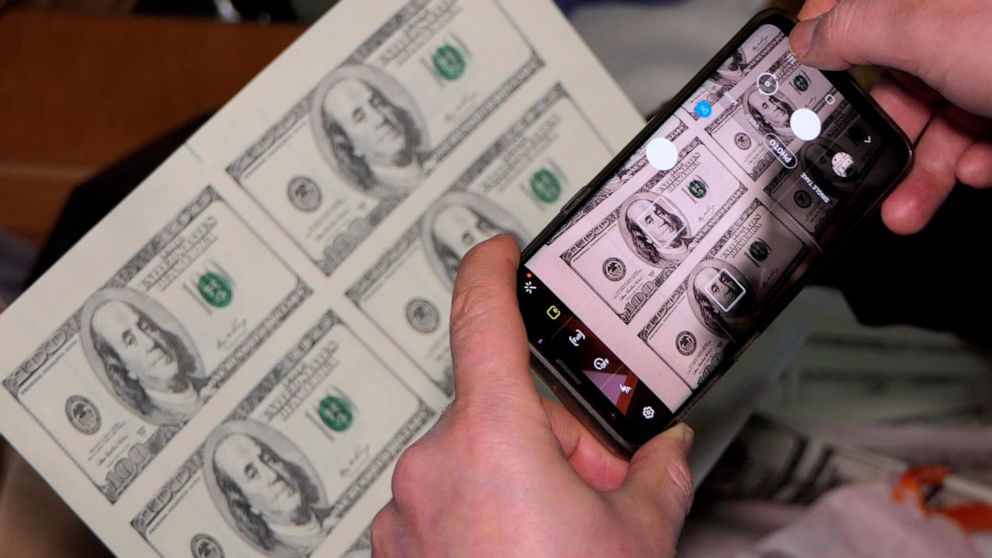 In a joint operation with the U.S. Secret Service, Bulgarian police detained two people and seized a printing machine and equipment for printing money, along with large amounts of counterfeit U.S. dollar and euro notes.

The amount of counterfeit money seized is $4 million and 3.6 million euros, according to the prosecutors office.

Police believe that the two suspects are part of a larger criminal enterprise, dealing in the trafficking of counterfeit dollars to Ukraine, and of euros to Western Europe. Search underway for suspect in fatal shooting aboard Amtrak train

Everton: The candidates to replace Rafael Benitez as Toffees boss

6 officials out of NCAA Tournament after 1 tests...

Workers at a New York Amazon warehouse Monday filed a petition to hold a unionization vote, months after a first attempt at a similar vote in Bessemer, Ala., fell short.Organizers at the State...
Read more

Delta variant​ could cause next COVID wave: “This virus...

Multiple servers in Gary, Ind., were recently targeted by ransomware hackers but city officials say they are already in the process of rebuilding and restoring function.City spokesman Michael Gonzalez said that the...
Read more

What to expect from Trump’s joint session of Congress...

CBS News political director and "Face the Nation" moderator John Dickerson joins "CBS This Morning" from Washington to discuss President Trump's budget proposal and how the president is communicating his agenda to the American people.
Read more

Florida is in the grip of its deadliest wave of COVID-19 since the pandemic began, a disaster driven by the highly contagious delta variant
Read more

How H.R.1 intends to overturn Supreme Court rulings on...

H.R. 1 seeks to revive a bad idea and to make it federal law.
Read more

Don't miss Verizon's iPad Pro 2021 deals this weekend if you're looking for a cellular tablet - you can save $460 with the carrier's 'BOGO' promotion.
Read more

The Memo: Boos for Trump show scale of vaccine...

Former President Trump was booed at a rally on Saturday after he encouraged his supporters to get vaccinated against COVID-19.The offending remarks were mild."I believe totall...
Read more

The successful operation underscores the need for companies to cooperate with investigators after a hack, federal officials said.
Read more

Hong Kong ramped up security and warned activists against holding any demonstrations as the Asian financial center prepares to mark a particularly sensitive anniversary of the former British colony’s return to Chinese rule.
Read more

As consort to Queen Elizabeth II, he was Britain's "first gentleman," a man with a fairy-tale title in an era that was hardly from a fairy tale. Correspondent Mark Phillips looks back on the life of Prince Phillip, who died this week at the age of 99.
Read more

Ana Uglow, 17, was on a trip to New York and Washington DC when she fell ill with sepsis.
Read more

Novak Djokovic: Is his vaccine saga an unforced error...

The story of the star tennis player being held in Australia sparks ire at every twist and turn.
Read more

The State Department announced visa restrictions on Thursday against eight Cuban officials for their roles in ...
Read more

Tom Brady warmed the hearts of NFL fans earlier this season when he gave his hat to a young boy holding a “Tom Brady helped me beat brain cancer" sign.
Read more

Brazil hit 300,000 deaths from the coronavirus on Wednesday becoming the second country behind the U.S. to see that many deaths from the pandemic.The country's health ministry reported the number...
Read more

U.S. Customs and Border Protection agents in Louisville seized an illegal shipment of testosterone and anabolic steroids worth about $69,000.
Read more

"The War with Grandpa" star Robert De Niro injured his leg on the set of his upcoming movie, ''Killers of the Flower Moon."
Read more

AMD wants you to help choose which games get...

AMD is using a survey to help determine how to push forward with FidelityFX Super Resolution.
Read more

For the first time in the history of the summit, the world leaders won't have a news conference.
Read more

Watch highlights as Real Madrid move top of La Liga with a 2-1 victory over Barcelona in an El Clasico played in torrential rain at the Alfredo Di Stefano Stadium.
Read more

A Republican’s Friendly Advice to Democrats On How Not...

In a wide-ranging conversation, Liam Donovan discusses Nancy Pelosi’s plans, the savviness of Bernie Sanders and how a party facing “mutually assured destruction” can rebuild trust between moderates and progressives.
Read more

Teen who drove into cyclists training in Texas charged...

A teenage driver who drove his pickup into six cyclists in Texas earlier this year, severely injuring the group, has been charged with six counts of aggravated
Read more

First Read is your briefing from "Meet the Press" and the NBC Political Unit on the day's most important political stories and why they matter.
Read more

Brazilian prosecutors aim to investigate whether the president failed to act over a Covid vaccine 'bribery scandal'. Also: why parents want Amazon to change the name of its virtual assistant, and can we all benefit from the space race?
Read more

The Garden State has been reliably blue in presidential and U.S. Senate elections, but an incumbent Democrat hasn't been reelected since 1977.
Read more

The Pentagon official who has been overseeing its new cybersecurity initiative for defense contractors has been placed on leave in connection with a suspected unauthorized disclosure of classified information from a military intelligence agency, according to …
Read more

The meeting with Boris Johnson will be Mrs Foster's last as both DUP party leader and first minister.
Read more

President Joe Biden signaled in a town hall-style event Thursday he was open to eliminating the filibuster, as several key pieces of his agenda are held up by the 60-vote threshold needed in the Senate. CBS News senior White House correspondent Weijia Jiang j…
Read more

Ruling could complicate hundreds of prosecutions over storming of Congress on Jan. 6
Read more

Google could launch a new Chromecast this year

A mysterious new wireless streaming device from Google has appeared via an FCC listing, and could be an updated Chromecast model.
Read more

The positive trial results could pave the way for vaccinating children younger than 12, if approved.
Read more

Stillwater is said to be inspired by Ms Knox's wrongful murder conviction in Italy.
Read more

Rudy Giuliani is in big trouble

72 percent of Arizona Democrats say they would prefer...

Sen. Kyrsten Sinema (D-Ariz.) could be in serious trouble with Democratic voters when she goes up for reelection in 2024.A new Arizona Public Opinion Pulse conducted by the Phoenix-based OH Predictive Insights foun...
Read more

The vote counts and percentages could changed based on absentee ballots.
Read more

Fog forces Coastguard helicopter to land on road at...

The rescue helicopter involved in an urgent transfer was unable to land at Aberdeen Royal Infirmary.
Read more

Wave of cancelled flights from omicron closes out 2021

Flight cancellations surged again on the last day of 2021, with airlines blaming it on crew shortages related to the spike in COVID-19 infections
Read more

Millennium Management will trial a hybrid working arrangement as it seeks to find a best-of-both-worlds approach for staff in the wake of the pandemic.
Read more

The Turtle Beach Battle Buds are as budget as you're going to get when it comes to gaming headphones – but that's not necessarily a bad thing.
Read more

Many companies are transforming their brands to show support for the LGBTQ+ community. But their political contributions appear to tell a different story. Sheila Krumholz, an administrator for OpenSecrets, joins CBSN's Lana Zak with more.
Read more

American Airlines says a passenger entered the open cockpit of a jet that was preparing to take off in Honduras, and he damaged the plane before crew members and police could stop him
Read more

Dr Helen Wall says she received "unwarranted abuse" after tweeting a photo of herself being jabbed.
Read more

A judge ruled that Florida would be harmed by...

Martin Shkreli, the pharmaceutical company CEO who caused a public uproar after drastically raising the price of a life-saving prescription drug, was arrested on Thursday; Some superfans bring their devotion to Star Wars into their every-day lives.
Read more

Blinken arrives in France on mission to repair ties...

Secretary of State Tony Blinken launches a delicate repair mission with France Monday, the first senior US official to visit Paris since the announcement of a US-led security pact blindsided Paris, costing it billions in lost defense sales and rupturing diplo…
Read more

India’s overwhelming surge of coronavirus infections has revealed complacency after last year’s first wave, as well as a “lack of foresight, a lack of leadership,” according to Raghuram Rajan, former governor of the country’s central bank.
Read more

The blaze broke out in the Savile Town area of Dewsbury on Friday afternoon, fire crews say.
Read more

Tyson Fury serenaded the Las Vegas fight crowd after knocking out Deontay Wilder in the 11th round to retain the WBC and The Ring magazine heavyweight titles on Saturday night.
Read more

Four senators call on Becerra to back importation of...

Greece’s economy expanded 3.4% in the second quarter from the January to March period, driven by investments.
Read more

Can sticking to our dreams end up holding us back? Diane and her husband promised they would sell their home on retirement and travel the world. Sadly, he passed away before they could do that. Diane wants to carry on with that plan but the pandemic has made …
Read more

Senate Republican leader Mitch McConnell on Saturday told Attorney General Merrick Garland that parents "absolutely should be telling" local schools what to teach amid a debate over mask and vaccine mandates, the role of racial equity education and transgende…
Read more

As Biden’s infrastructure plan advances, can GOP get to...

For President Joe Biden and the senators laboring over a nearly $1 trillion infrastructure package, there’s just one question left: Can enough Republicans get to yes
Read more

A unique project aimed at reducing harm to women selling sex in Copenhagen… Every weekend night in Copenhagen’s red light district of Vesterbro, a group of volunteers pull up and park a Red Van. This is no ordinary vehicle. The interior is lit with fairy ligh…
Read more

Billboard Music Awards live stream: how to watch the...

The Weeknd leads the way with 16 nominations at the 2021 Billboard Music Awards, and our guide explains how to watch a BBMAs live stream online wherever you are.
Read more

Eight Russian women are among those detained for public debauchery, the Russian consulate said.
Read more

A lawyer for former President Trump on Thursday slammed the indictment against the Trump Organization and its chief financial officer as being politically motivated."This is a sad day for the Man...
Read more

Russian President Vladimir Putin has launched the construction of new nuclear submarines and other warships, part of a sweeping military modernization effort amid tensions with the West
Read more

Argentina won their first major title in 28 years on Saturday and Lionel Messi finally won his first medal in a blue-and-white shirt when an Angel Di Maria goal gave them a 1-0 win over Brazil and a record-equaling 15th Copa America.
Read more

Green MSPs 'can make a difference'