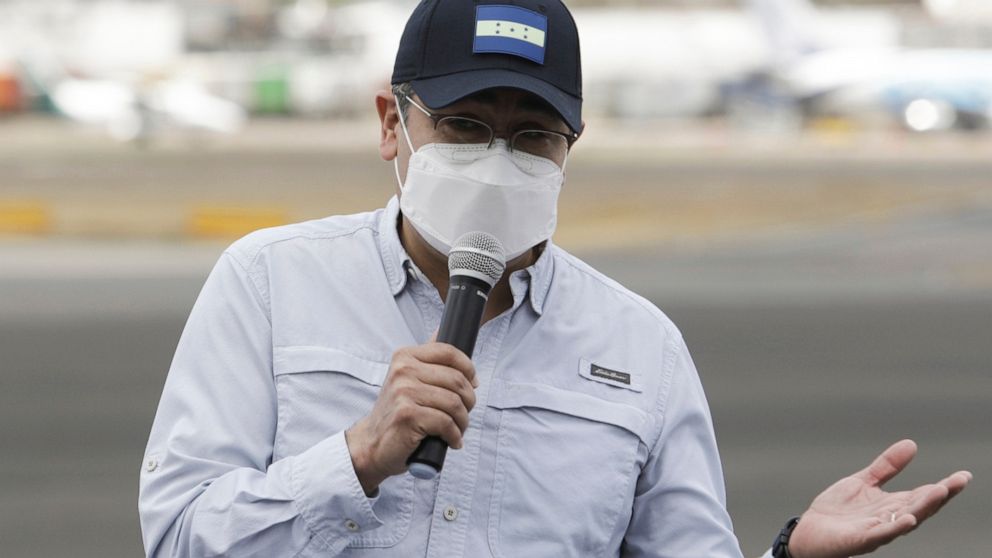 NEW YORK — A Honduran accountant testified Tuesday that he fled Honduras because he felt his life was in danger after witnessing two meetings in which an alleged drug trafficker paid bribes to now- President Juan Orlando Hernández in 2013.

In both meetings, the subject was protection and receiving drugs, said José Sánchez, a pseudonym used for his protection. At one Hernández was given $10,000 and at another the amount was $15,000, the accountant said.

That alleged drug trafficker was Geovanny Fuentes Ramírez, whose New York trial is in its second week. Hernándezs name has come up repeatedly in the trial as U.S. prosecutors continue to argue that his political rise was fueled by drug traffickers.

The accountant testified that in addition to the two payments he witnesses, Hernández arrived various times to the company in a helicopter to receive monthly payments of 250,000 lempiras, about $10,000. They payments were for his campaign, the accountant said.

Hernández won his first term as president in 2013 and took office in January 2014. Prior to that he had been the president of Honduras’ congress.

Hernández has not been charged and has repeatedly denied any wrongdoing.

Fuentes Ramírez was arrested in March 2020 in Florida. He is charged with drug trafficking and arms possession.

During the accountants testimony, the phone line that allows those outside the court for reasons of the pandemic to listen in on the proceedings was cut at prosecutors request. They feared someone could recognize his voice.

The man had been the accountant for Graneros Nacionales, a rice business that was used to launder drug proceeds.

On Monday, convicted drug trafficker Devis Leonel Rivera Maradiaga, former leader of the Cachiros cartel, testified that Fuentes Ramírez had told him in jail that he had photographs and videos of Hernández being present when drugs were received from Colombia to airports in Tegucigalpa and San Pedro Sula.

Last week, Rivera Maradiaga testified that he paid Hernández $250,000 for protection from arrest in 2012 when the politician was the leader of Honduras congress. Battery Swapping for EVs Is Big in China. Here’s How It Works

Rep. Sheila Cherfilus-McCormick (D-Fla.) was sworn into the House Tuesday, making her the newest member and boosting the Dem...
Read more

Trump travels to Saudi Arabia amid controversy at home

President Trump left Friday for his first foreign trip while in office. CBS News chief White House correspondent Major Garrett is traveling with the president, and breaks down whether recent controversies at home will impact Mr. Trump's visit.
Read more

Presented by AARP New Jersey Good Thursday morning! It wouldnt be lame duck without a new bill to boost politicians pensions. And here it is:...
Read more

Former President Clinton says he’s on the mend after...

Former President Bill Clinton released a video saying he is on the road to recovery after being hospitalized in Southern California for six days to treat an infection unrelated to Covid-19. The 75- year-old Clinton, who arrived Sunday at his home in New York,…
Read more

Lewis Hamilton says his battle with Max Verstappen for this year's drivers' title does not yet live up to his rivalry with Sebastian Vettel.
Read more

Indiana Gov. Eric Holcomb (R) on Tuesday vetoed a bill that would limit the authority of local health departments to issue orders during an emergency.Holcomb wrote in a ...
Read more

Senate Democrats on Monday called on the Biden administration to condemn human rights violations reported in the Philippines as part of President Rodrigo Duterte's five-year war on drugs.In a letter to Secretary of...
Read more

Bo Burnham started putting comedy videos on YouTube back in 2006, when he was just 16. They went viral, and today, Burnham is regarded as the first YouTube star, as well as one of the most talented comedians of our time. But Burnham is also an outspoken criti…
Read more

Dr. Scott Gottlieb, the former FDA commissioner, says "I think we are seeing a hopeful trend across the country" as hospitalizations and deaths are down from COVID-19.
Read more

A selection of the week's best photos from across the continent and beyond.
Read more

COP26: The story from Glasgow in 15 pictures

The most eye-catching demonstrations and unusual stories during COP26 have unfolded on the streets of Glasgow.
Read more

Tarrio's message comes just two weeks after a court sentenced him to prison for tearing down a Black Lives Matter banner from a historic Black church in downtown Washington D.C. and bringing firearms to the Capitol.
Read more

Some 1,000 vehicles were trapped during a blizzard in the town of Murree, the interior minister says.
Read more

Twitter tests full-size images previews in your feed on...

The next time you’re browsing through your Twitter timeline on your phone, you may notice a small but impactful change to how the service handles images. With a small subset of iOS and Android users, Twitter has started testing full-sized picture previews, al…
Read more

Did Hans Zimmer really own the first-ever pair of...

The final rebuttal comes after both the prosecution and the defense delivered their closing arguments on Monday.
Read more

Mammoth or Monterey&quest; Apple registers both names for a...

Social care: What would a National Insurance rise mean...

The government could raise National Insurance to help pay for social care in England.
Read more

Rep. Paul Gosar (R-Ariz.), who has repeatedly been criticized by other lawmakers and outside groups for spreading conspiracy theories about the 2020 election and other issues, on Wednesday cast a rioter shot while trying...
Read more

If regional banks show signs of accelerating loan growth when they report earnings in the week ahead, it could signal an easing of the supply chain bottlenecks that have weighed down the U.S. economic recovery from the pandemic, analysts and investors said.
Read more

New Zealand's 206 new daily community infections on Saturday carried it past the double-hundred mark for the first time during the coronavirus pandemic, as the nation scrambles to vaccinate its population of 5 million.
Read more

DeSantis defends transgender athletes bill: We have to protect...

They are accused of running a back-channel campaign to get Mr Trump's government to drop a case.
Read more

GOP to Herschel Walker: Consider staying on the bench

Why are roaming charges coming back, and why are...

Find out the reasons that UK mobile networks are putting up the price of using your phone in the EU (despite promising not to).
Read more

Former Secretary of Defense Robert Gates on the president's approach to governing and who he looks to for advice.
Read more

While Twitter permanently banned one account linked to Ayatollah Ali Khamenei, others remain active on the platform.
Read more

Durst jury reaches verdict in killing of his best...

Women have regulated men into obsolescence. The political fallout of our feminism is now. The post Beware the Matriarchy appeared first on The American Conservative.
Read more

AstraZeneca struggles to rebuild confidence in vaccine after PR...

It’s not clear that the vaccine's strong results, which could clear the way for the U.S. to allow emergency use of the shot, will shore up global opinion.
Read more

Mexico’s richest man has reached an agreement with Mexico City authorities to rebuild or reinforce an elevated subway line that collapsed in May, killing 26 people
Read more

Inside the Capitol Hill townhouse where tech’s critics feel...

Lawmakers and lobbyists looking to check the power of Silicon Valley's biggest giants have flocked to the $2.8 million house that Oracle owns just blocks from the halls of Congress.
Read more

Police say Taliban fighters took control of a key district in Afghanistan’s northern Kunduz province and encircled the provincial capital, as the insurgent group added to its string of recent victories on the battlefield
Read more

A sensational curling effort from winger Federico Chiesa gives Italy the lead against Spain in their semi-final tie at Wembley during Euro 2020.
Read more

Moontype’s Songs Of Fellowship: ‘The Music Got Better As...

Chicago trio Moontype tell MTV News how their friendship solidified as they began working together on the emotionally probing material that became their excellent debut LP, 'Bodies of Water.'
Read more

The organizer said the lights were "a message aiming at a decision taken by the Hungarian national parliament."
Read more

How 4 Women Would Redesign Their Work Weeks

As society rethinks the future of work, we asked a group of women how they’d like to remake their work weeks to help them better balance their lives.
Read more

For the third time in less than two months, the U.S. aviation system on Tuesday faced the threat of widespread flight disruptions over potential 5G interference, only to get a limited and temporary reprieve.
Read more

What we know about the investigation into Rudy Giuliani

California oil spill shows why we need the climate...

We can succeed where others failed in 2010. A victory can come just in time to send President Biden to the United Nations Climate Conference in Glasgow with a strong hand to play for winning greater global climate ambition.
Read more

A leisure centre blaze in 2018 killed 60 people, most of them children, in a Siberian city.
Read more

Iran obtained its first quantity of uranium enriched close to levels needed to make a weapon, adding to obstacles facing diplomats as they try to revive the 2015 nuclear pact that curbed the Islamic Republic’s nuclear program in exchange for sanctions relief.
Read more

The 67-year-old engineer from London hopes the strike will bring attention to those unfairly held in Iran.
Read more

Burnley's Premier League match against Tottenham at Turf Moor is postponed less than an hour before kick-off because of snow.
Read more

Covid: The ‘new normal’ behind the scenes at Cardiff...

The 10-Point Plan To Get Moms Back To Work

“We’re Momming Today” with Reshma Saujani, founder of Girls Who Code and the Marshall Plan for Moms, about how to get Mom back to work. Women’s participation in the workforce is at the lowest level since 1989 and can drop even further if companies aren’t more…
Read more

Two people among a group of 17 US and Canadian missionaries abducted last month are said to be safe.
Read more

Noreen Wredberg and her husband, Michael, weren't really expecting to find anything at Arkansas' Crater of Diamonds State Park, she said, and she wasn't sure what she had found when she picked up a stone.
Read more

Biden to Putin: Help me help you

In a summit of self-interest, the U.S. president tried to make Putin understand that it's in Russia’s interest to play nice with the United States.
Read more

A Canticle for Fauci

Walter Miller's classic sci-fi novel may portend a backlash against our own intellectual elite. The post A Canticle for Fauci appeared first on The American Conservative.
Read more

The European Union began testing its cyber-defense responsiveness on Friday with a simulated attack on a fictitious Finnish power company as the bloc seeks to strengthen its digital defenses amid concern about a potential attacks.
Read more

What’s Making You So Gassy? This Gadget Aims to...

The FoodMarble measures the level of hydrogen in your breath, which can tell you which foods are causing your digestion woes.
Read more

Huawei’s HarmonyOS alternative to Android is tipped to launch...