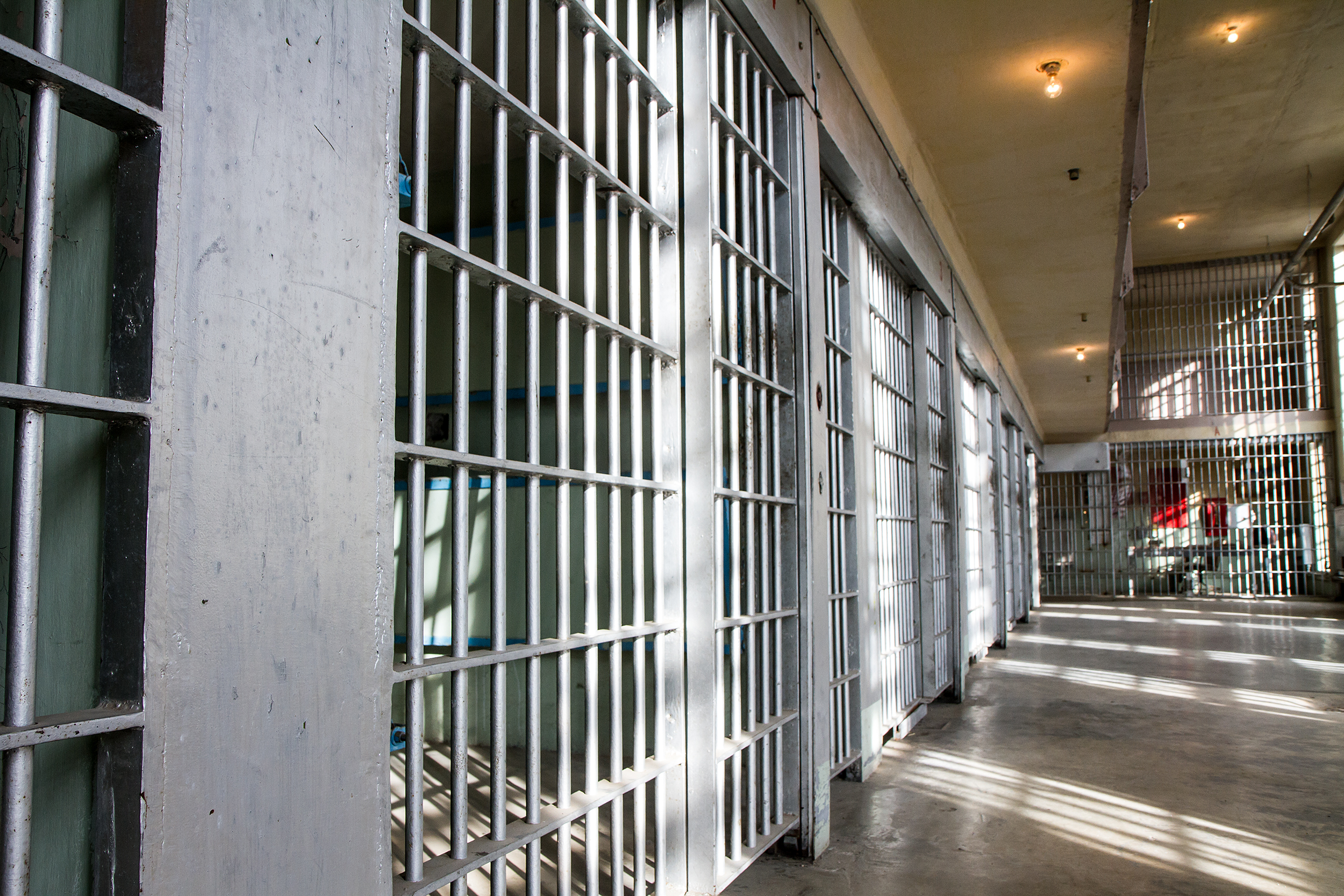 Seven Texas detention employees have been placed on leave after the death of a Black man in custody.

The Collin County Sheriff’s Office said on Monday that 26-year-old Marvin D. Scott III, of Frisco, died Sunday while he was in custody at the Collin County Detention Facility in McKinney.

Officers from the Allen Police Department had arrested Scott earlier on Sunday and transported him to the jail, the sheriff’s office said in a news release.

Scott’s cause of death has not been released.

Collin County Sheriff Jim Skinner referred the matter to the Texas Rangers, who are investigating the death.

The sheriff placed seven detention employees on administrative leave “as a matter of policy” and ordered an internal administrative investigation, the sheriff’s office said.

“The Sheriff’s Office will not release additional information while the Texas Rangers are investigating,” it added in the news release.

Nick Bristow, a spokesman for the Collin County Sheriff’s Office, told Newsweek that Scott’s arrest was for alleged possession of marijuana under two ounces.

Commenters on Facebook have criticized police for arresting Scott for allegedly possessing such a small amount of marijuana.

“I’m pleasantly surprised by the transparency but it doesn’t make the situation any less upsetting,” Melissa Howell wrote on the sheriff’s office post.

“This was a completely unnecessary arrest and waste of resources. The Allen PD and CCDF need to be held accountable for this man’s death. He never should’ve been jailed in the first place.”

Stock photo. Seven Texas detention employees have been placed on leave after the death of a Black man in custody.Getty

Ephraim Sobrino wrote: “It’s ridiculous that people die over something where the government 1. Cannot prove jurisdiction 2. Doesn’t have a provable injured party.”

Michael Zamot added: “A death… because of a plant, a victimless crime… wtf Texas???”

Earlier this month, Texas state Rep. Jessica González filed House Bill 3248, which would allow counties and municipalities in Texas to legalize the recreational use of cannabis by order or ordinance.

González noted that the majority of Texans support legalizing recreational marijuana use.

“While Texas has made progress with the Compassionate Use Act, we have been left behind on a potential revenue source that would increase investments in public education, stop the unnecessary arrests for cannabis possession, and create jobs in our state,” she said in a statement. The lawyer who oversaw payments to victims of the Sept. 11 terrorist attacks has agreed to mediate part of the fight between Johnson...
Read more

Costs of aluminium for European consumers are scaling record highs due to soaring energy costs and production cuts, which have exacerbated deficits of the metal used in the power, construction and packaging industries.
Read more

A special edition Game & Watch console is being released to coincide with the 35th anniversary of 'The Legend of Zelda.' Here is all of the information about the limited-run item.
Read more

The Scottish government announces a £1bn plan to tackle backlogs in healthcare caused by the Covid pandemic.
Read more

DAMAC founder delays steps to go private until after...

The founder of DAMAC Properties (DAMAC.DU) has postponed efforts to take the firm private after the securities regulator of the United Arab Emirates launched a review of the transaction, the company said on Tuesday.
Read more

Mark Matthews on the Markets (Radio)

Willie Garson, who played Stanford Blatch on TV’s “Sex and the City” and its movie sequels, has died at the age of 57
Read more

The sellers defended their decision to deny the viewing and purchase based on their religious beliefs.
Read more

Newspaper headlines: Praise for GB heroes, and push for...

Republican Gov. Mike DeWine has announced the end of coronavirus health orders in Ohio as of June 2
Read more

The actress reaches a settlement with News Group Newspapers after alleging her privacy was invaded.
Read more

Congressman Chris Stewart: From the Air Force To Capitol...

This week, Jason sits down with Representative Chris Stewart (R-UT), who discusses the lessons he learned growing up on a farm in Utah and why he decided to join the Air Force.
Read more

COVID-19 is tearing through the U.S. workforce, disrupting businesses from grocery stores to airlines.
Read more

Sinema confronted in airport and plane about spending bill,...

Sen. Kyrsten Sinema, D-Ariz., was approached by people in an airport and on an airplane who demanded to know why she is refusing to vote for President Biden's "Build Back Better" agenda.
Read more

The next PS5 restock at the PlayStation Direct store in the US goes live today - here's when and how to buy a console.
Read more

Organisers say the world fair will be the largest global gathering since the start of the pandemic.
Read more

Central Michigan came to the desert southwest to play in one bowl game and ended up in another.
Read more

The Senate has voted to confirm Judge Merrick Garland's nomination to be attorney general.
Read more

‘Zombie’ fires could become more common due to climate...

Want a job? Employers say: Talk to the computer

Grassroots activism over the case of Spears, who was under a legal conservatorship controlled by her father for the past 13 years, has drawn national media attention to the issue.
Read more

Jamie Spears: ‘No grounds’ for removal from daughter’s conservatorship

Britney Spears’s father, Jamie Spears, hit back at a motion to immediately remove him as the conservator of her estate, arguing that the request had “no grounds whatsoever.”
Read more

Johnson & Johnson is assuming full responsibility on the manufacturing of a drug substance for its Covid-19 vaccine at Emergent BioSolutions Inc.’s Bayview facility, the company said in a statement.
Read more

The Texas office of the U.S. Securities and Exchange Commission (SEC) is investigating whether lenders are providing regulators and investors different versions of their policies on working with fossil fuel, gun and...
Read more

The London Metropolitan Police have labeled the stabbing of a British lawmaker a terrorist incident on Friday.David Amess, a member of Parliament from the Conservative Party, was stabbed to death...
Read more

Miami Beach declares state of emergency amid crowds of...

Australian Prime Minister Scott Morrison has announced a new plan to protect and promote technologies critical to the national interest, including quantum technologies, in a challenge to China’s emerging dominance in key strategic fields
Read more

Jeep’s Wagoneer lineup is loaded with technology and touchscreens

Jeep's Wagoneer is back and big in every sense of the word, including the amount of technology found inside. The beloved large luxury SUV brand (which surely inspired the Simpson's "Canyonero") has multiple touchscreens, support for...
Read more

‘Back 4 Blood’s’ Single Player Mode Is Getting a...

"Back 4 Blood" has previously been criticized for its lackluster single player campaign, which is now getting a much-needed update to address this feedback.
Read more

England and Aston Villa goalkeeper Hannah Hampton "wasn't supposed to play sport" after she was born with a squint and had multiple eye operations, but wants to encourage others to "follow your dreams".
Read more

However, the industry groups said vaccination should not be a requirement for domestic or international travel.
Read more

Family of veteran who froze to death after being...

The family of a Wisconsin Army veteran who froze to death after being discharged from a Veterans Affairs hospital will receive $1 million in restitution from the federal government, The Associated Press reports.
Read more

Tricks, Treats and Magical Mischief at Disney Parks Around...

Whether you’re looking to see your favorite Disney villains, try new treats or visit with some happy haunts, there are so many ways to join in the frightfully fun festivities taking place at Disneyland Paris, Hong Kong Disneyland Resort, Shanghai Disney Resor…
Read more

Lovers of canned cranberries may have to be flexible this Thanksgiving and opt for fresh due to shortages of the cans used to...
Read more

The Biden administration has asked the Supreme Court to decline to hear a lawsuit alleging that the U.S.'s all-male military draft amounts to unconstitutional discrimination on the basis of sex.In ...
Read more

Protect your computer from ransomware

Ransomware locks up a victim's files until money is paid. Here's how to protect your data and avoid an attack on your computer network
Read more

Teen pilot Zara Rutherford was set to arrive in Seoul on Saturday from Russia, the first Asia stop on her attempt to become the youngest woman to fly around the world solo.
Read more

Vancouver Whitecaps say three academy players were assaulted on Saturday in what the side believes to be a racially motivated attack.
Read more

More college-educated women in their 30s are having babies outside of marriage, according to a study done by a sociologist at Johns Hopkins University.The research published in the P...
Read more

Biden says he will speak with Manchin next week

President Biden on Friday acknowledged that he wasn't sure he could get Sen. Joe Manchin (D-W.Va.) on board to pass his sweeping climate and social spending package but said he would be talking to him at the start of next...
Read more

What is TPM: Why are Trusted Platform Modules important

With TPM, you can control who accesses sensitive data on your systems - and where that data goes.
Read more

President Biden must work with Congress to update Supplemental Security Income for people with disabilities and seniors in the American Families Plan.
Read more

Police say they have been called to the Pollokshields area of the city to help the UK Border Agency.
Read more

US adds Japan to ‘Do Not Travel’ advisory list

The United States has added Japan to its list of countries not to travel to due to the COVID-19 situation.
Read more

The BBC hears about the ban's harmful impact from teachers and students in 13 Afghan provinces.
Read more

Auditors give thumbs up to Google VPN

Google VPN has a “very robust security posture” according to the NCC Group which conducted an audit of the service.
Read more

Police are investigating a banner by Crystal Palace fans at their match on Saturday criticising the Saudi Arabian-led takeover of Newcastle.
Read more

Justin Fields scored a rushing touchdown in his debut with the Chicago Bears on Sunday night in a loss against the Los Angeles Rams and fans demanded the team name him the starting quarterback.
Read more

Beloved actor Charlie Robinson, who passed away on July 11, was known for his roles in several shows, including "Night Court," "Home Improvement," and "Mom."
Read more

All pandemic long, scientists brawled over how the virus spreads. Droplets! No, aerosols! At the heart of the fight was a mysterious error in decades-old research.
Read more

Biden, Merkel to meet at White House in July

Pregnant people infected with coronavirus more at risk for...

Nursing school applicants have not let the pandemic dissuade them from pursuing their dreams.
Read more

Mudd on Capitol rioters: This is not an ideology. It's an excuse