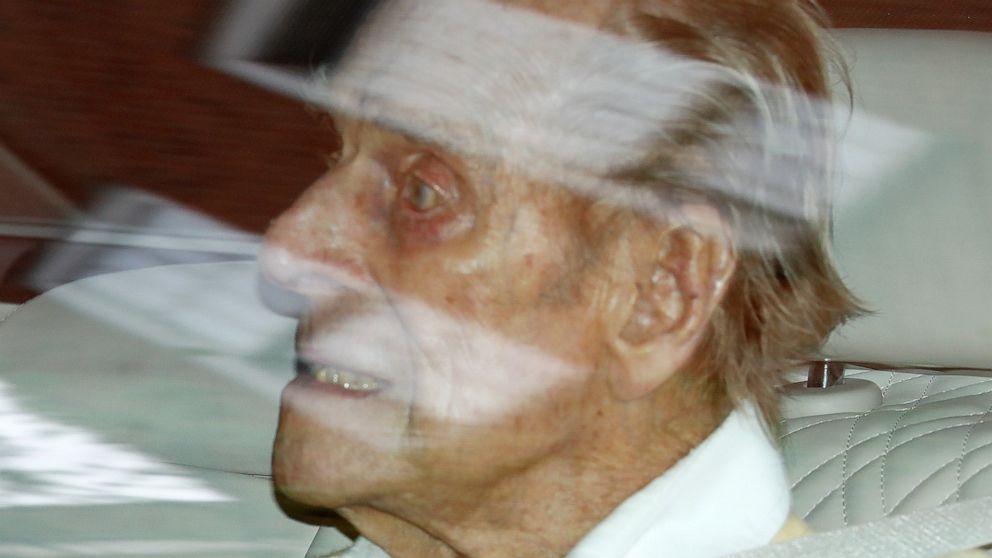 LONDON — Britains Prince Philip left a London hospital on Tuesday after being treated for an infection and undergoing a heart procedure.

Philip, 99, the husband of Queen Elizabeth II, had been hospitalized since being admitted to the private King Edward VIIs Hospital in London on Feb. 16, where he was treated for an infection.

He was later transferred to a specialized cardiac care hospital, St. Bartholomews, for a short stay, before returning to King Edward VIIs.

Photographers standing outside the door of the private hospital captured his departure. Buckingham Palace has not yet commented on the matter.

Philips illness is not believed to be related to the coronavirus. Both Philip and Elizabeth received COVID-19 vaccinations in January and chose to publicize the matter to encourage others to also take the vaccine. Search underway for suspect in fatal shooting aboard Amtrak train

Everton: The candidates to replace Rafael Benitez as Toffees boss

One of two California families who were stuck in Afghanistan just hours ahead of the final U.S. flight out of Kabul have reached safety, the Cajon Valley Union School District confirmed Tuesday afternoon.
Read more

An Oklahoma woman was arrested after allegedly fatally shooting her husband in February.
Read more

Sex abuse of adults by priests outlawed by Vatican

Other changes include barring sex abuse of adults by laypeople who are church officials and removing much of say bishops and others have in handling of sex cases.
Read more

Nearly four decades ago, “Romancing the Stone” introduced audiences to the crackling chemistry between Michael Douglas and Kathleen Turner, the duo is back onscreen in Netflix's “The Kominsky Method.”
Read more

Two politicians in Germany’s nationwide elections on Sunday made history by becoming the first transgender women to win parliamentary seats.Tessa Ganserer, 44, and Nyke Slawik, 27, both ran as members of Germany’s Greens party."It is a historic...
Read more

Nursing homes have to publicly disclose their vaccination rates for flu and pneumonia, but there’s no similar mandate for COVID-19 shots
Read more

Missing teen rescued after making a hand gesture she...

A missing teenager from North Carolina was rescued by Kentucky police after she signaled for help by using a hand gesture known on TikTok to represent violence at home, according to police.
Read more

Patrisse Cullors, the co-founder of Black Lives Matter, announced she is stepping down from her role as executive director of the movement's foundation.Cullors, who co-founded the group with Alicia Garza and Opal T...
Read more

Dog Films Her Own TikTok Video and the Internet...

A video has gone viral on TikTok which appears to show a dog filming and starring in her own video, and it's the cutest thing you'll see all day.
Read more

3 resign from Auschwitz museum board over appointment of...

Three members of the advisory council for the Auschwitz-Birkenau Museum in Poland resigned after the government appointed a member of the country's right-wing ruling party to serve on the body, ...
Read more

Memorial to be dedicated on anniversary of newspaper attack

Liverpool are looking at RB Leipzig defender Ibrahima Konate as they seek to strengthen at centre-back this summer.
Read more

After Man City ended Chelsea's unbeaten start to the season, BBC Sport's Phil McNulty looks at the significance of the victory.
Read more

Surrey's trip to Durham in the County Championship is cancelled after an unnamed Surrey player tests positive for Covid-19.
Read more

A look back at some of the prominent figures on the African continent who we said farewell to this year.
Read more

Climate activists are blockading Amazon warehouses across the U.K. on Friday in an attempt to pressure the company on one of its busiest days of the year
Read more

The Realme Pad is great for entertainment and education purposes and it performed well in terms of day-to-day activities. Check out our initial impressions.
Read more

Ashley Hemmings's decisive penalty puts Kidderminster Harriers ahead of Grimsby Town and seals a 1-0 win to take them to Round Two in the FA Cup.
Read more

Lamar Jackson throws for four touchdowns and a career-high 442 yards as the Baltimore Ravens fight back to beat the Indianapolis Colts in overtime.
Read more

Red Bull's Christian Horner expresses his "surprise" at gains he says Mercedes have made with their engine performance.
Read more

The European Union has cemented its support for Pfizer-BioNTech and its novel COVID-19 vaccine technology by agreeing to a massive contract extension for a potential 1.8 billion doses through 2023
Read more

Hospital officials in the northern Chinese city of Xi'an have been punished after a pregnant woman miscarried after being refused entry, reportedly for not having current COVID-19 test results
Read more

Can anybody deny Fabio Quartararo and Monster Energy Yamaha? Find out with a MotoGP live stream of the Spanish Grand Prix online - no matter where you are.
Read more

As the new COVID-19 variant surges through the nation, the CDC faces backlash over their most recent guidance, shortening the isolation period from ten days to five from an asymptomatic positive test. Former CDC Director Dr. Robert Redfield weighs in on the m…
Read more

And the Biden administration halted a military aid package to Ukraine.
Read more

Biden Wants to Save Global Democracy. Here’s What He...

We asked activists, scholars and politicians from around the world for one thing the U.S. could do to help democracy in their country.
Read more

If you’re a North American League of Legends fan, you’ve been forced to sit on sidelines and watch while people in Europe and other parts of the world have had a chance to play Wild Rift . That changes later this month, with Riot announcing today that it’s…
Read more

Biden’s big infrastructure ambitions are now up to the...

Biden has big ambitions for his infrastructure law. Now it's up to the states.
Read more

China’s Military, Economy on Track to Become World’s Most...

"That represents a greater challenge over the coming couple of decades," the Utah Republican senator said Sunday.
Read more

Ministers say it will unlock £10.4bn of trade, but UK farmers have concerns about being undercut.
Read more

Officials say she also had other medical issues which could have contributed to her death.
Read more

The Biden border crisis is a self-inflicted disaster that...

We are, indeed, a nation of immigrants. But for us to remain the world's brightest beacon of hope, we must acknowledge that a fundamental part of what makes America so attractive is our adherence to the rule of law.
Read more

The Asustor Drivestor 2 brings 2.5GbE to a home NAS, but its media capabilities are slightly held back by its internals
Read more

From recordings to custom visuals, here are some future-forward ways to show you appreciate someone.
Read more

The Trucking Episode: Why the Industry Is Such a...

Can celebrities control their image online?

Meet the stars who have attempted to police their online presence - from Remi Malek to Beyonce.
Read more

We review the latest release of the popular Debian derivative that exists to give users a usable desktop and server distro without relying on systemd.
Read more

The deep well of experienced, non-white candidates is widely cheered within the city’s Democratic apparatus. But the same milestone is proving challenging to navigate.
Read more

As COVID-19 restrictions are lifted in Italy, thousands of people are heading to see the extensive gardens and apartments at the Papal Palace of Castel Gandolfo in the Alban Hills near Rome. Built on a hilltop above Lake Albano, Castel Gandolfo was for centu…
Read more

Celtic: What lessons can Postecoglou’s men take from Europa...

Coronavirus infections are on the rise in Germany as the country has joined more than a dozen European nations in suspending the Oxford-AstraZeneca COVID-19 vaccine over concerns of blood clots. ...
Read more

TikTok, the Chinese-owned video-sharing app, was given one month by European Union regulators and consumer protection watchdogs to address concerns over the safety of children’s data on the platform.
Read more

Amtrak will cut services and riders will experience slowdowns beginning this winter, in part as a result of the Biden administration's vaccine mandate for federal contractors, the company's president told members of Congr...
Read more

The WNBA said on Monday that it has fined and suspended a head coach over mocking a player's weight during a game.The league said in a statement that the Connecticut Suns head coach and general m...
Read more

Qatar Orders Arrest of Finance Minister Over Misuse of...

Klete Keller admitted to obstructing an official proceeding and agreed to cooperate with prosecutors.
Read more

The Shark Is Broken: Jaws feud was ‘legendary’

A new play about the on-set tensions of Jaws is hitting the West End after a successful Edinburgh run.
Read more

"I was scared, because like, you never know how crazy people are like," a McDonald's employee said. "He could have had a gun and shoot us all."
Read more

Best Buy has spilled pricing for all of Intel’s incoming 12th-gen chips which are expected to be unveiled at CES.
Read more

Charlie Daniels’ death has left a ‘gigantic hole’ in...

Daniels’ longtime best friend and manager of 47 years, David Corlew, told Fox News that in the wake of Daniels’ passing in July 2020 at the age of 83, the organization was renamed to include the Grammy-winning crooner’s namesake and the Charlie Daniels Journe…
Read more

A Covid-19 vaccine from GlaxoSmithKline Plc and Canada’s Medicago Inc. demonstrated 71% efficacy against multiple variants of the disease in a positive outcome for the pandemic latecomers.
Read more

A data breach of a Christian crowdfunding sight revealed that public officials and police officers have donated to Kyle Rittenhouse, a teen facing charges for shooting at protestors demonstrati...
Read more

Fishermen found $1.5M worth of whale vomit in Yemen

A group of Yemeni fishermen had their lives changed with whale vomit.
Read more

Who Is Stephen Broderick? Ex-Deputy Sheriff on the Run...

Police efforts to locate Broderick evolved into a fugitive hunt on Sunday afternoon after three people were shot dead at an apartment complex in Austin, Texas.
Read more

The Ohio House on Wednesday voted to expel former Speaker Larry Householder (R) following his indictment in a federal bribery scheme, according to reports by ...
Read more

The Miami Marlins are bringing an old uniform back to life.
Read more

A jury finds Scott Walker guilty of murder but the body of his victim is yet to be found.
Read more

Are stay-at-home members the new face of Congress?