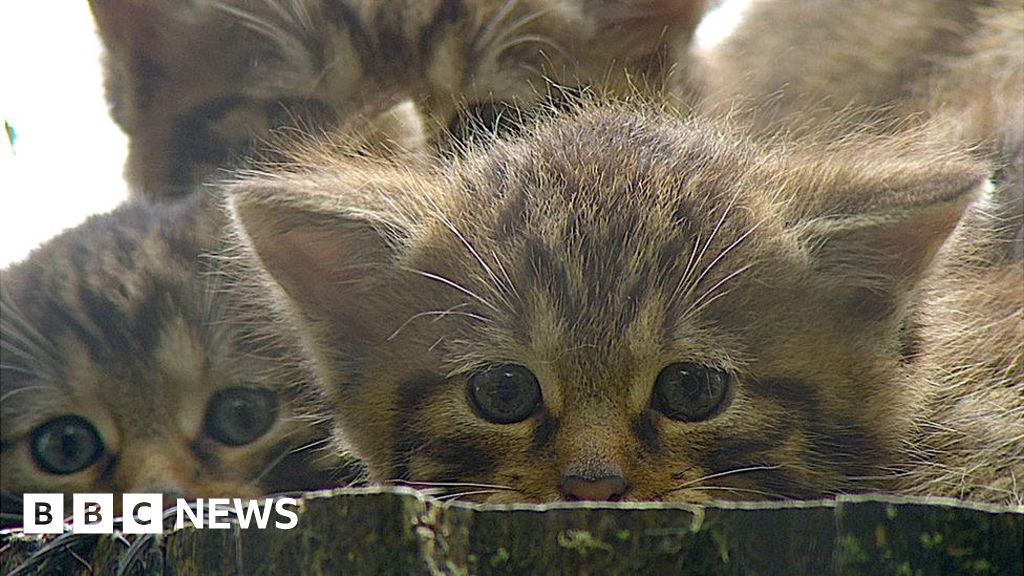 image captionFemale wildcat Nell, pictured when she was a kitten, is the first to arrive at the new centre in the Cairngorms

The first of 16 Scottish wildcats has been introduced to a new “breed-and-release” wildcat centre created in the Highlands.

Conservationists have warned the species is on the brink of extinction in the wild in Scotland.

The plan is to release kittens born at the captive breeding centre at the Highland Wildlife Park at Kincraig, near Aviemore, at selected locations.

The first wildcat to arrive is a young female called Nell.

She was born on the Alladale Wilderness Reserve near Ardgay in Sutherland. Her kittens could be among the first to be released into the wild.

The breeding centre is in area of the Highland Wildlife Park not open to the public.

The Royal Zoological Society of Scotland (RZSS), which owns the park, said the first kittens could be released at a site in Highlands next year.

image captionThe captive breeding centre has been built near Aviemore

RZSS is running the Saving Wildcats project in partnership with several other groups, including the Cairngorms National Park Authority and Junta de Andalucía, an organisation involved in wildlife reintroduction programmes in Andalusia in Spain.

All released wildcats would be fitted with a GPS collar so their movements and behaviour could be recorded.

The project would also seek to tackle the problems behind the decline in the species.

Breeding with feral domestic cats, disease and habitat loss have reduced wildcat numbers in the wild. Ukraine’s ‘Spider’ Rallies His Partisans for Any Russian War

Sonos Roam vs Sonos Move: what’s new with the...

The Sonos Roam is the follow-up to the Sonos Move portable speaker. Here’s how they compare based on the specs we’ve seen so far.
Read more

US and Israel announce joint task force on cybersecurity

The U.S. Treasury Department announced on Sunday that it would work with the Israeli Ministry of Finance to address ransomware and cybersecurity issues.The task force will aim "to protect critical financial infrastructure and emerging technologies"...
Read more

Taking over Afghanistan was the easy part. Now the...

With Afghans scrabbling to get their cash out and even basic services like water and electricity at risk, the former insurgency is already looking for help, and getting it.
Read more

The scene in "Gentlemen Prefer Blondes" has been widely imitated in the decades since, from Madonna's "Material Girl" video to Margot Robbie in "Birds of Prey."
Read more

This Is the Vision for DeFi Built on Bitcoin...

AJ Reeves leads Providence to win over No. 20...

A.J. Reeves scored 16 points and Providence held off No. 20 UConn 57-53 on Saturday in the Big East opener for both teams.
Read more

"We have notified Senator Lora Reinbold that she is not permitted to fly with us for her continued refusal to comply with employee instruction regarding the current mask policy."
Read more

IMF Board to See Georgieva and Law Firm in...

The International Monetary Fund’s executive board plans to speak with law firm WilmerHale and then fund chief Kristalina Georgieva in rare Sunday meetings as it pushes to finish an ethics review that has become a central topic at the lender, according to peop…
Read more

2 on trial for stabbing of elderly French Holocaust...

A school district in Southlake, Texas, is changing its policies on what books teachers can keep in their classrooms following backlash and parent complaints about an anti-racist book, ...
Read more

The West End star who worked as carer during...

As theatres reopen, actors like Stephen Beckett have been swapping their lockdown jobs for their place on the stage once more.
Read more

Dangerously cold air from the Arctic is howling across the Upper Midwest, and heading east. Omar Villafranca is in Bismarck, North Dakota, where it feels like minus-twenty.
Read more

Man Utd return to form with victory against Brighton

A deadly third wave of COVID-19 is sweeping through parts of Russia. The nation reported more than 24,700 new cases on Tuesday and 780 deaths. Authorities are blaming the new wave on the highly contagious Delta variant and the slow rate of vaccinations. CBS N…
Read more

Police in Democratic Republic of Congo used tear gas to break up clashes between supporters of the president and an opposition leader on Saturday, as lawmakers selected a new head of the electoral commission.
Read more

‘Queen of Halloween’ celebrates the holiday every day: ‘Be...

Have you ever wished you could celebrate Halloween every day?
Read more

Have you ever heard of alpaca therapy?

At a farm in Fife, a herd of the South American animals are being used to help people with varying disabilities and mental health issues.
Read more

Polis frustrated with ‘convoluted messaging out of the CDC...

Colorado Gov. Jared Polis (D) on Sunday said he is frustrated with the "convoluted messaging" about booster shots coming from the Centers of Disease Control and Prevention (CDC) and the Food and Drug Administration ...
Read more

Sign up for our Beyond Brexit weekly newsletter, follow us @Brexit and  subscribe to our podcast. The U.K. government urged the European Union to show a...
Read more

The U.S. Navy on Wednesday released dramatic photos from a demonstration of a high-energy laser weapon system that “successfully engaged” a floating target during a test in the Gulf of Aden.
Read more

Brussels under high alert as search for Paris suspects...

Police across Europe are still searching for a pair of suspects from the Paris terror attacks. They were tracked across the border into Belgium. Despite an easing up on the lockdown in Belgium, the manhunt for two Paris attack suspects continues. Security rem…
Read more

US-mediated Lebanon-Israel talks on border at sea to resume

The U.S. mediating team says indirect talks between Lebanon and Israel over their disputed maritime border are to resume next week
Read more

Former Pittsburgh Steelers lineman Tunch Ilkin has died, according to a statement from Steelers President Art Rooney II. He was 63.
Read more

Black History Month: The sporting heroes who changed our...

BBC Sport takes a look at some of the black sporting heroes who simply meant everything to us, changed our lives and made us fall in love with sport.
Read more

Former Labour leader Jeremy Corbyn says he expects an independence vote to be held "in a few years".
Read more

John Woods on the Markets (Radio)

After humble beginnings as a pushcart operation by an Oregon town's railroad tracks, Dutch Bros Coffee has launched an initial public offering on the New York Stock Exchange
Read more

There are "good reasons" for keeping the new variant out of the UK, scientist Prof Mark Walport says.
Read more

Fifa is investigating racial abuse aimed at England players during Thursday's 4-0 win over Hungary in a World Cup qualifier in Budapest.
Read more

Two women on an electric scooter hit a pedestrian and did not stop to provide help, officials say.
Read more

Watching cable TV on your Xbox One is about...

Bad news for cable subscribers: Microsoft says it will be pulling Xbox OneGuide support for the Xbox One family of consoles with its new update.
Read more

It is time for Congress to make our transportation system more efficient, affordable, equitable and accessible for everyone, by investing in public transit in the next surface transportation reauthorization bill.
Read more

Not only did Sandler O'Neill lose more than one third of its employees on 9/11, but it also lost its entire World Trade Center headquarters. Steve Kroft was there as the financial firm returned to business.
Read more

Apple will again require vaccinated customers and staff to wear masks at more than half of its U.S. stores, ...
Read more

Web services are restricted in the capital ahead of demonstrations against the military coup.
Read more

Bill and Melinda Gates divorce could shake up philanthropy

As much as billionaire couple Bill and Melinda Gates want to keep their pending divorce private, the split is already sending shockwaves through the worlds of philanthropy and public health
Read more

Turkey's central bank raised the required reserves ratio for foreign currency and precious metal deposits by 200 basis points, according to a decision published in the Official Gazette early on Wednesday.
Read more

Covid vaccine: First dose given to a million in...

More than a million people in Wales have now had their first dose of the Covid vaccine.
Read more

Racehorse Bold and Bossy escaped from a racetrack in Henderson, Kentucky, and ran down a highway before being rescued.
Read more

How to get the best holiday travel deals

It's not too late to find great deals on hotels and flights for last-minute holiday travel. Travalliance President and CEO Mark Murphy joins CBSN with how to find the best bargains.
Read more

The former commander of U.S. troops in Afghanistan told senators Tuesday he opposed a full withdrawal from the country and advised Pentagon leadership of his position, the top Republican on the Senate Armed Services Commi...
Read more

Pelosi presses ahead with planned Thursday vote on infrastructure

Speaker Nancy Pelosi (D-Calif.) is pressing ahead with her plan to stage a Thursday vote on the Senate-passed infrastructure bill, brushing aside threats from liberals vowing to sink the proposal and expressing conf...
Read more

Bank policymakers keep rates steady despite concerns of an inflation surge in the wake of the pandemic.
Read more

No parental leave ‘a barrier’ to local politics

Campaigners say about two thirds of councils in England do not have a formal parental leave policy.
Read more

Earlier in the day, the minister tweeted​ photos from the United Nations headquarters in Manhattan.
Read more

Next Africa: Mozambique Pays a Terrible Price for Spurning...

Ecuador Defaulted Last Year. Now Its Bonds Are the...

Across the world, government bondholders have seen losses pile up this year as a pickup in inflation and economic growth puts central banks under pressure to raise interest rates.
Read more

Watch as Great Britain narrowly miss out on beating a new team pursuit world record set by Germany in the qualifying round.
Read more

CNN analyst Rick Santorum went on the network to try and explain comments about Native Americans that have led to criticism, but he didn't appear to calm things down
Read more

Happy Tuesday and welcome to On The Money, your nightly guide to everything affecting your bills, bank account and bottom line. Subscribe here: ...
Read more

Covid in Wales: Self-isolation rules to ease for double...

Fully vaccinated contacts of positive Covid cases will not have to isolate from 7 August.
Read more

Many Afghan families who once had steady, stable incomes have plummeted into desperation, uncertain of how they will pay for their next meal
Read more

The illegal gold mines killing rivers and livelihoods in...

Kate, the duchess of Cambridge, is reportedly self-isolating after coming in contact with a person who tested positive for COVID-1...
Read more

Maj. Christopher Warnagiris of the U.S. Marine Corps was arrested in Virginia on Thursday.
Read more

Carla Harris, one of the few Black women to rise to the top echelons of Wall Street, is stepping down as Morgan Stanley’s vice chairman of wealth management.
Read more