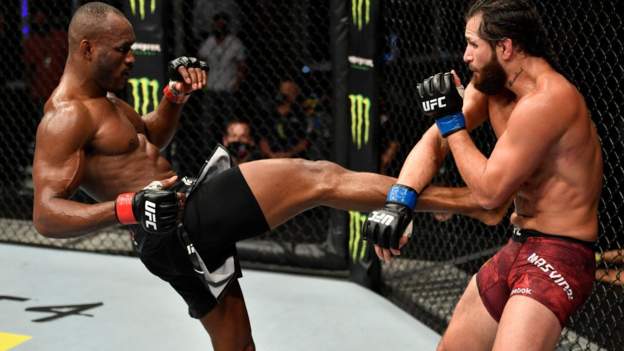 The UFC is set to host its first full-capacity event in 13 months, its president Dana White says.external-link

UFC 261 has been scheduled for 24 April in Jacksonville, Florida.

The UFC would become the first American sports organisation to host a full crowd since the start of the coronavirus pandemic.

The event will feature three title fights, headlined by a rematch between welterweight champion Kamaru Usman and Jorge Masvidal.

The event will be staged at the VyStar Veterans Memorial Arena, which holds 15,000 people.

“Dana White, governor Ron DeSantis and I will continue to demonstrate that Florida is poised to safely host signature sporting events watched globally. Welcome back to Jacksonville UFC. Let’s go.”

The first match-up between Usman and Masvidal was one of the biggest fights of 2020 as the UFC staged events behind closed doors on Abu Dhabi’s Yas Island, which was dubbed Fight Island.

Usman claimed a unanimous decision win over Masvidal last July before making a third defence of his title against Gilbert Burns last month.

Britain’s Leon Edwards hoped to secure a title shot against Usman before his fight with Belal Muhammad last weekend was declared a no contest following an accidental eye poke. Money Is Just a Meme (Podcast)

Maryland Republican says complaint filed against him for prescribing...

Rep. Andy Harris (R-Md.) said a complaint was filed against him with a medical board for prescribing ivermectin to COVID-19 patients. Harris alluded to the complaint during the House Freedom Caucus meeting about vaccine mandates on Monday,...
Read more

178 staffers at Houston Methodist hospital suspended for not...

A Texas hospital has suspended 178 staff members who refused to get the COVID-19 vaccine despite a mandate for staff to be inoculated by this week.
Read more

Their lives haven’t changed since getting vaccinated. This is...

For all the people who are clamoring to get back out in the world post-vaccine, there are plenty who are saying, "nope, we aren't ready."
Read more

Truck shortages have caused BP to close some gas stations in the United Kingdom on Thursday, ...
Read more

SC Gov. McMaster doubles down on no school mask...

South Carolina Gov. Henry McMaster (R) on Monday affirmed his decision to not issue a mask mandate in his state as some other governors have amid a renewed surge in COVID-19 largely due to the delta variant.Speakin...
Read more

Learn how to produce music in Ableton Live with...

If you’ve spent any portion of the last year’s mandated downtime mastering a musical instrument, then congratulations on being more productive than most. Expressing yourself creatively is a great way to maintain your sanity, and if you’re actually wr...
Read more

A Louisiana judge heard on video using racial slurs to describe an alleged burglar at her home has resigned.
Read more

The FA will celebrate the Women's Super League's 10th anniversary by opening a Hall of Fame.
Read more

Disha Ravi, a 22-year-old climate activist in India, was arrested and charged with sedition last month for sharing an online handbook meant to help raise support for farmer protests that have convulsed India
Read more

Experts say the numbers of barnacle geese dying has fallen - but warn there could be another spike.
Read more

Woman’s List of Rules From Her Ex Sparks Debate...

The 11-point list of rules Carolyn's ex sent included not going within 25 feet of another boy, and sparked a debate over toxic relationships.
Read more

What college campus outbreaks indicate about this year’s flu...

Flu outbreaks on college campuses including the University of Michigan suggest the U.S. could be in for a bad flu season this year.
Read more

On the sidelines, Hezbollah looms large over Gaza battle

Investigators believe a massive cargo ship dragging anchor in rough seas caught an underwater oil pipeline and pulled it across the seafloor, months before a leak from the line fouled the Southern California coastline
Read more

‘2 things at once’: Biden mixes his messages on...

The climate-focused administration is "caught between what it needs for elections and its long term policy goals."
Read more

Witness to Ma’Khia Bryant’s shooting tells officer he has...

Witnesses at the scene in when 16-year-old Ma'Khia Bryant was shot and killed said that the police officer involved had no regard for her life, ...
Read more

A report from the Associated Press released Monday night seemed to paint a grim picture of the conditions at the border just over four months since Harris’ appointment to the role.
Read more

“Drake and Josh” star charged for crimes against a...

Burnley boss Sean Dyche is "really pleased" with his side following a "challenging" season as they confirm their Premier League status with a 2-0 win over Fulham.
Read more

Michael Fawcett has been accused of offering to help a wealthy Saudi businessman receive a CBE.
Read more

Austria Speeds Up Vaccine Program With No Spending Cap:...

The suspect, referred to as Andrés by local police, will stand trial for the alleged murder of a 34-year-old woman on May 14.
Read more

Israel-Hamas ceasefire could come as soon as Friday: report

A ceasefire between Israel and Hamas could come as soon as Friday, people involved in the discussions told The Wall Street Journal. U.S. and foreign officials told the newspaper that Egyptian officials have made progress in their negotiations with...
Read more

Ngozi Okonjo-Iweala promised that life at the World Trade Organization on her watch would not be business as usual.
Read more

Lenovo has five new Android tablets including a huge...

A little-known digital token linked to the Cardano blockchain has just become the third-largest virtual currency in the world as network developers look to ride the boom in decentralized finance.
Read more

Vox Media Inc. is discussing a possible merger with Group Nine Media Inc., a move that would unite two of the biggest players in digital media. Sources told ...
Read more

Many Latinos think that having a darker skin color...

More than half of Latinos think their skin color hurts their chances at social mobility and makes them a target of discrimination, a new study from the Pew Research Center shows.
Read more

40 percent of Marines have declined the coronavirus vaccine

Forty percent of the Marines are declining to get the coronavirus vaccine, according to data obtained by CNN...
Read more

The consultant who helped select jury in the O.J....

Jury and trial consultant Jo-Ellan Dimitrius, known for having developed the juror profile in O.J. Simpson's trial, has worked "hand in hand" with attorneys representing Kyle Rittenhouse in his trial to help develop a jury profile that would best fit their ca…
Read more

President Biden and Democratic lawmakers gathered Thursday in Washington to observe the first anniversary of the Jan. 6 attack on the Capitol, a somber occasion that was essentially boycotted by Republicans, who are wary...
Read more

Half of CIOs plan private 5G network within next...

The pandemic has made organisations more aware of the need to invest in digital capabilities.
Read more

Like every other aspect of our society, how we handle death and dying needs to change in the face of climate change. This method may be a path forward.
Read more

Buying a home? Skip the ‘love letter’ to the...

The housing market is so competitive, buyers are doing anything they can to get a home.
Read more

The Department of Health said it could not divert funding to continue the Covid-19 policy beyond August.
Read more

House Speaker Nancy Pelosi is signaling that she is poised to create a new committee to investigate the Jan. 6 insurrection at the Capitol, pushing closer to a partisan investigation of the attack after Senate Republicans blocked the creation of an independen…
Read more

There’s a crisis in the world today; the rise of angry protests and the primal scream of politics are evidence. Yet, while it’s easy to identify the problem, it’s difficult to find a solution. Ah, but the solution has always been with us. It’s God’s truth and…
Read more

NWSL players halt matches in display of solidarity amid...

NWSL teams briefly halt matches in a display of solidarity with players who have made sexual misconduct allegations against a coach.
Read more

Table Mountain fire ‘burns out of control’ in Cape...

The blaze has so far destroyed part of a cafe at the Rhodes Memorial above the city of Cape Town.
Read more

Ubisoft has released a trailer showing what we can expect from the Far Cry 6 PC version, and it's looking pretty excellent.
Read more

The Boy Scouts of America reached settlement with a major group of sex-abuse survivors, a defining moment in the organization’s bankruptcy case.
Read more

Former Nicaraguan President Enrique Bolaños Geyer, a businessman who led the country from 2002 to 2007, saw his predecessor and old running mate locked up for corruption and pushed for the country’s economic development, has died
Read more

Your Weekend Reading: Biden Hunts for Taxes to Fund...

Zelensky to meet with France, Germany on Russia tensions

Ukrainian President Volodymyr Zelensky will huddle with the leaders of France and Germany Friday to discuss increasing tensions with Russia.Zelensky's ...
Read more

Sen. Kirsten Gillirband (D-N.Y.) said Thursday she expects her bill to overhaul the military justice system will get a standalone vote on the Senate floor in the fall.Gillibrand in recent months has taken to the Se...
Read more

Fauci: ‘I agree’ with Newsom vaccine mandate for California...

As countries around the Asia-Pacific region tighten restrictions once again to curb potential breakouts of the Delta coronavirus variant, Singapore has laid out a new vision for life to return to normal.
Read more

Republicans raise concerns over Biden’s nominee for ambassador to...

Feifei Li on the Markets (Radio)

Facebook's parent company said on Tuesday it had unblocked the hashtag for celebrity chef Nusret Gokce's nickname '#saltbae', having found the tag had been blocked globally days after a video was posted online of Gokce feeding a gold-encrusted steak to a seni…
Read more

The next Manhattan district attorney, Alvin Bragg Jr., says he plans to personally focus on the high-profile probe into former President Donald Trump's business practices and may expand the investigative team while keeping at least one senior prosecutor on th…
Read more

Manner Coffee, a Shanghai-based cafe chain, is considering an initial public offering in Hong Kong that could raise at least $300 million, people with knowledge of the matter said.
Read more

President Barack Obama speaks with Major Garrett about the criticism he's received along with U.S. Attorney General Eric Holder. The president said such comments aren't what ordinary people are thinking about.
Read more

Coronavirus vaccinations in Ohio jumped 28 percent in the days following the governor's announcement of a lottery for residents who get the shots, state health officials said Thursday.Vaccination...
Read more

Singer-songwriter Madi Diaz's new album with a new label, ”History of a Feeling,” is being released this week, and it shines bright
Read more

Portable chargers, compact coolers and everything else you need for the best road trip ever
Read more

The England striker asks why footballers "can't just do the right thing" for charity.
Read more