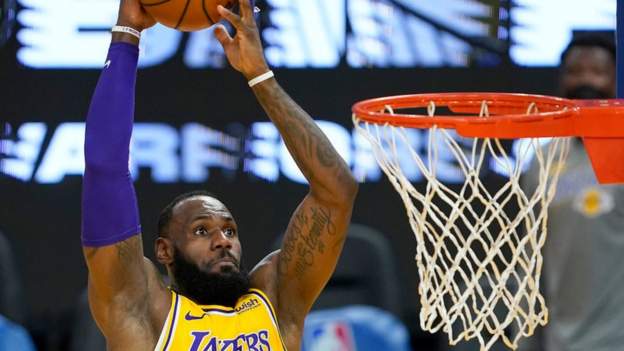 LeBron James helped the Lakers win the 2020 NBA Finals, after the Warriors won three of the previous five titles

LeBron James recorded the 98th triple-double of his career as the Los Angeles Lakers eased to a 128-97 win over the Golden State Warriors in San Francisco.

Montrezl Harrell scored 15 of his team-high 27 points as the Lakers pulled away in the second quarter to win the season series with the Warriors 2-1.

The team that won the last six series between the division rivals went on to reach the NBA Finals, winning four.

James had 22 points and is fifth on the NBA’s all-time list for triple-doubles.

Stephen Curry scored 27 points to lead the Warriors, who were coming off an impressive home win over the Utah Jazz a day earlier but suffered their fifth loss in six games.

The Lakers (26-13) are narrowly behind the Phoenix Suns near the top of the Pacific division while the Warriors are 20-20 and the Jazz have the NBA’s best record of 28-10.

The in-form Suns improved to 26-12 with Devin Booker scoring 27 points as Phoenix rolled to a 122-99 victory over the visiting Memphis Grizzlies.

Kyrie Irving scored 34 points and James Harden posted his sixth triple-double in 14 games as the Brooklyn Nets held on for a 117-112 win over the New York Knicks.

Irving scored nine points in the fourth quarter as the Nets (27-13) finally put away their local rivals, who trailed by 18 just before the half.

The Knicks got the lead down to 115-112 with 10.6 seconds remaining on a dunk by Julius Randle, who finished with 33 points.

Randle then won the ball back but was called for traveling on a pump fake with 3.2 seconds left and Harden finished off the Nets’ 13th win in 14 games.

Randle questioned the official who made the call and, after the game, had to be restrained before throwing a chair as he headed to the locker room.

Elsewhere on Monday, Giannis Antetokounmpo recorded his third consecutive triple-double as the Milwaukee Bucks held off a second-half surge to win 133-122 at the Washington Wizards.

The NBA’s two-time reigning Most Valuable Player, who was also MVP in the All-Star Game on 7 March, finished with 31 points, 15 rebounds and 10 assists as the Bucks improved to 25-14. The arrests are in connection with the death of George Robertson, 53, who was hit by a vehicle near Bathgate last September.
Read more

‘Tomahawk chop’ under scrutiny as Atlanta Braves compete in...

With the Atlanta Braves in the World Series, their name and a gesture used by their fans have come under scrutiny from Native American groups around the country.
Read more

Rookie Cameron Kinley was signed by the Tampa Bay Buccaneers as an undrafted free agent following the 2021 NFL Draft, but he won’t be able to suit up for the defending Super Bowl champs after the U.S. Naval Academy denied his request to delay his service.
Read more

Natural resources left in Afghanistan are ‘a treasure chest...

Gov. David Ige (D-Hawaii) on Wednesday invited fully vaccinated people to travel in and out of Hawaii for non-essential travel beginning on Nov. 1, citing a drop in COVID-19 cases and hospitalizations."Our hospital...
Read more

Stablecoins Need to Be Backed by Cash, Pro-Crypto Senator...

A strong cold front will be the focus of many weather hazards Wednesday and Thursday.
Read more

This Is the Perfect Storm That Caused Grain Prices...

The Goddess of Grain explains what's going on
Read more

"You can potentially have it at home." A game-changing #Covid19 pill is being developed by Merck, which claims to cut the risk of hospitalization by about 50%. @Deakin University's Catherine Bennett explains how https://bloom.bg/2YpDoRs (Source: Quicktake)
Read more

Antitrust legislation is the tool conservatives need to do something about corporate power. The post Time to Trust Bust Big Tech appeared first on The American Conservative.
Read more

The Latest From Sun Valley (Radio)

California ordered a stage-2 power-grid emergency -- one step away from rolling blackouts -- as a searing heat wave drives temperatures into triple-digits and sends demand for electricity soaring.
Read more

Google is testing an experimental feature that allows users to run commands from the address bar.
Read more

A left-leaning professor claimed that South Dakota Governor Kristi Noem's parade with an American flag was "unserious, self-destructive, and faux patriotic." He said it explains the Taliban's success in Afghanistan.
Read more

How Biden Can Be a Leader in an Israeli-Palestinian...

The Middle East might be low on his priority list but there are meaningful steps he can take to prevent future violence. But the question is, will he?
Read more

When a Mississippi dad couldn't get in touch with his beloved daughter who had moved from Alabama to Texas, he feared the worst and believed her new boyfriend had something to do with it. "48 Hours" correspondent Maureen Maher joins "CBS This Morning" to prev…
Read more

What are prop guns and why are they dangerous?

An incident involving US actor Alec Baldwin puts the spotlight on an item often used on film sets.
Read more

Colorado lawmakers have asked the Department of Justice's (DOJ) inspector general to investigate local law enforcement's knowledge of a man accused of killing five people and wounding others in a shooting spree in D...
Read more

The Las Vegas Raiders Defensive End made the announcement in an Instagram post and said he hoped coming out as gay would help increase "visibility."
Read more

Ethereum developers are at loggerheads with miners over imminent...

Careers and Covid: When the pandemic hit job ambitions

With young people under pressure for jobs, research shows career choices are shaped at a young age.
Read more

Buccaneers vs Saints live stream: how to watch NFL...

Here's how to get a Tampa Bay Buccaneers vs New Orleans Saints live stream and watch the NFL game from anywhere, as the NFC South rivals clash for the first time this season.
Read more

Celtic's Kyogo Furuhashi an injury doubt for Premiership restart, while VAR's introduction in the Scottish football is facing a delay.
Read more

The Supreme Court on Monday appeared wary of a California law that requires nonprofit charities to disclose the identities of their top financial donors to state officials.Hearing arguments by...
Read more

The BlueGreen Alliance, a coalition of major labor unions and environmental organizations, is kicking off a campaign to demand “bold” investments in climate-friendly manufacturing jobs as Congress wrestles with advancing President Biden’s economic...
Read more

MPs told to smarten up their clothing ahead of...

Jeans and chinos are banned in a toughening of post-Zoom Commons rules set by the Speaker.
Read more

Dexter Studios Co., a Seoul-based visual effects production firm, surged on Friday to become the latest Korean stock to rally because of its links with Netflix Inc.
Read more

Indian Hockey semi-finals: How to watch India vs Belgium...

India vs Belgium Men’s Hockey semi-finals will be played on August 3. Here is how to catch all the live-action.
Read more

The world's largest body of Muslim-majority nations, with a membership of 57 countries, condemned strongly what it described as "the heinous terrorist run-over perpetrated by an extremist" against a Muslim family in Canada.
Read more

Mo Farah's coach Gary Lough says there is "no way" his failure to qualify for the Tokyo Olympic Games at the British Championships will be his final appearance on the track.
Read more

Olympics China talks up ‘green’ Olympics but prepares to...

China is using the Winter Olympic Games to drive its efforts to improve the environment, but smog-prone capital Beijing is still preparing for the worst as the opening ceremony looms.
Read more

These are the new releases on Amazon Prime India, Netflix, Disney+ Hotstar, SonyLIV and other OTT platforms in India.
Read more

Former President Barack Obama on Thursday embraced the scaled down economic framework released by the Biden administration, calling it a "giant leap forward" even as some progressive Democrats express concern about what w...
Read more

US innovation and manufacturing is vital for national and...

Indiana is ready to compete, collaborate and lead in addressing this national need. We just need Congress to enact legislation as soon as possible, send it to the president’s desk, and states like Indiana will make you proud.
Read more

Boeing Co. jetliner deliveries slipped in April as the planemaker temporarily grounded some 737 Max models because of a manufacturing glitch.
Read more

The Nasdaq index will require all its listed companies to have diverse boards, or explain why they do not.
Read more

Learn the ins and outs of Python, JavaScript, Java,...

You can increase your marketability by picking up a new coding language with Udacity.
Read more

Earlier in the day, the minister tweeted​ photos from the United Nations headquarters in Manhattan.
Read more

Belarus sees a year of fierce repression after disputed...

Two Florida cousins are facing murder charges in connection with the ambush killing of a 17-year-old marijuana dealer in a Polk County park earlier this week, according to authorities.
Read more

Tesla will no longer accept bitcoin over climate concerns,...

The initial decision made by Tesla in March to accept bitcoin caused an outcry from environmentalists.
Read more

Vaccinated people are catching and then spreading the virus to those they live with, UK study finds.
Read more

Debt-laden China Evergrande Group may have another asset to sell in its scramble to raise cash: its fast-growing life insurance business.
Read more

Paris St-Germain reached the French Cup final as they edge out Montpellier 6-5 in a dramatic penalty shootout.
Read more

According to an NBC News analysis, full vaccination rates in rural counties lag their urban counterparts, however, there are some places where rural, mid-sized and large counties are leaving the national average in the dust.
Read more

Snow expected to hit the Northeast

The Northeast could get hit with snow later this week. Eric Fisher, chief meteorologist at CBS station WBZ in Boston, has the forecast.
Read more

Honeywell has agreed to pay the State Department $13 million after it transferred to other countries - including China - unauthorized technical data on the F-35 and F-22 fighter jets, among other weapon systems.The...
Read more

Family of late Texas man who told officers he...

Texas's Williamson County has settled the case of a 40-year-old Black man who died during his 2019 arrest after telling officers he could not breathe."The Commissioners Court approved a settlemen...
Read more

Authorities released digitally enhanced images on Thursday of an unidentified boy who was found dead on a hiking trail near Las Vegas.
Read more

Severe flooding has forced more than 1,000 people from their homes in Southeast Texas, and at least eight people have died statewide. After days of relentless rain, the Brazos River near Houston is at record levels and threatens to cause more flooding. Manuel…
Read more

The Nothing Ear (1) wireless earbuds appear in black...

If the white version of the Nothing Ear (1) doesn't do anything for you, perhaps the rumored black version will.
Read more

He was nominated to the Supreme Court by Obama only to have Republicans refuse to take up the nomination.
Read more

OSHA is counting on employees to notify the safety agency if businesses violate the new federal COVID-19 order.
Read more

PUBG Mobile developer could be working on a new...

PUBG Mobile developers Krafton has apparently been working on a sci-fi shooter called 'Vertical' according to leaks and will take about two to three years to release.
Read more