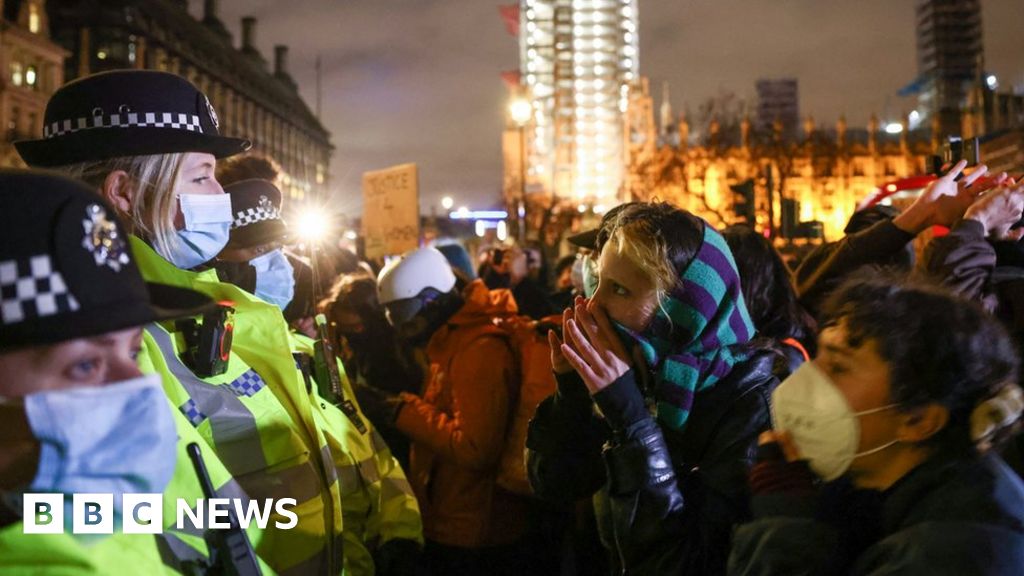 Police have arrested four people at a vigil for Sarah Everard in central London on Monday.

Hundreds gathered outside Parliament and New Scotland Yard to pay tribute to Sarah Everard, the 33-year-old woman killed as she walked home from Clapham.

One person remains in custody after being arrested on suspicion of assaulting an emergency worker.

The Met faced widespread criticism for its handling of the Clapham Common vigil on Saturday where officers handcuffed and removed several women.

The force’s commissioner, Dame Cressida Dick, has rejected a call to step down.

Demonstrators again took to the streets of the capital on Monday afternoon and evening to continue to protest over the police’s handling of the vigil.

Some attendees also protested against the government’s Police, Crime, Sentencing and Courts Bill, which was having its second reading in Parliament.

The Met said it had “maintained an appropriate policing plan” during the protest action around Parliament Square, Trafalgar Square and parts of the West End.

Protesters blocked “a number of roads” and caused traffic disruption, the force added. A powerful mudslide that closed one of Colorado's most scenic routes revealed the vulnerability of the country's aging infrastructure to global warming.
Read more

Only 41 percent of eligible voters cast ballots, but the procedure was approved despite the pope's disagreement, with only 3,265 voting against it.
Read more

Commerzbank Nominates New Board Chairman Amid Turmoil at Top

Ozuna was charged with aggravated assault by strangulation and battery.
Read more

The Biden administration on Wednesday will begin accepting orders for free at-home Covid-19 tests, the latest government response to a record number of infections.
Read more

The former commissioner was intimately involved in the FDA’s decision to approve hydroxychloroquine for emergency use during the pandemic.
Read more

Biden Speech on Pandemic Anniversary Pushed Both Unity and...

His pandemic-anniversary speech reflected his campaign promise to represent everyone, including foes of his liberal policy agenda.
Read more

‘I left university and adopted my brother and sister’

When Jemma Bere’s family was in crisis, she made a split-second decision that changed the trajectory of her life.
Read more

Lawyer says Murdaugh to turn himself in on insurance...

A parent who was arrested during a June school board meeting in Loudoun County, Virginia, is accusing the district of trying to cover up an alleged bathroom sexual assault by a gender-fluid individual against his daughter in order to further its transgender r…
Read more

The U.S. Justice Department said German software company SAP SE entered into a non-prosecution agreement after being the first company to come forward and voluntarily disclose that it violated export and sanctions laws related to Iran.
Read more

Former Education Secretary William Bennett is launching a series of interactive stories that will combine literacy and historical education in an attempt to counter content like the "1619 Project."
Read more

In private, Qatar warn US officials of ‘growing crises’...

Qatari officials are warning their American counterparts that the situation at U.S. facilities, where thousands of Afghan evacuees are being housed, is growing more dire.
Read more

Beer Flows in Brussels as Local Covid Rules and...

While the global trend is toward opening back up, a handful of places facing rising case numbers are cracking down again
Read more

This comes after more optimistic rumors contending that we’ll see these models in the summer.
Read more

Poundland says 10% of its products are not a...

One in ten Poundland products no longer a pound, the discount retailer says.
Read more

Avianca Adding Routes to Beaches With Eye On Bankruptcy...

Olympics, climate on the agenda for Biden meeting with...

President Biden will welcome Japanese Prime Minister Yoshihide Suga on Friday for his first in-person meeting with a foreign leader, which the White House said is intended to send a message about the importance of the rel...
Read more

Labour’s Angela Rayner: ‘Where are you getting money, Boris,...

Labour wants PM to explain the funding of refurbishments to the his Downing Street flat.
Read more

The Beatles: Aphrodite statue from historic gig being auctioned

The Aphrodite statue was used in The Beatles set in the first live satellite broadcast in 1967.
Read more

The sports world is reeling Monday morning after an onslaught of racist vitriol was spewed on social media towards members of England's soccer team following Sunday's Euro 2020 final, in which England was beaten by Italy...
Read more

Ndakasi, an orphaned mountain gorilla whose picture went viral after she photobombed her caretaker Andre Bauma's selfie, has died his aged 14.
Read more

Biden’s presidency comes down to this

Biden's agenda could come apart at the seams next week as Democrats face a looming government shutdown, the threat of a federal debt default and the potential implosion of either the infrastructure bill or the $3.5 trillion spending package, writes Julian Zel…
Read more

Video platform Rumble, which has grown in popularity among conservatives as an alternative to YouTube, has reached agreements with eight "thought leaders" to provide content, including former Rep. Tulsi Gabbard...
Read more

The Papers: Covid pill roll-out, and families’ ‘fury’ at...

Sunday's papers include reports the first at-home Covid treatment could be offered before Christmas.
Read more

Brooklyn Nets' Kyrie Irving says he is "doing what's best for me" in refusing the Covid-19 vaccine, a move that will see him sidelined from the NBA.
Read more

Spotify is launching the Locker Room app as ‘Spotify Greenroom’ offering a platform for artists and users to interact and participate in live audio chats.
Read more

Why the No Time To Die ending doesn’t really...

Spoilers follow as we discuss the ending of No Time To Die, the final Daniel Craig James Bond movie.
Read more

There are rumours Tom Cruise, star of the spy films, has already visited the quarry in Derbyshire.
Read more

Covid: Glimmer of hope on Omicron and millions facing...

There were nine children among the fatalities in the fire, which took hold on Sunday in the Bronx.
Read more

Covid and cancer: The young scientists working overtime to...

Lab staff are working long unpaid hours to reduce the impact Covid is having on cancer research.
Read more

I tested The Rock’s exercise headphones to see if...

A county judge in Georgia ruled Friday that 2020 election absentee ballots in the state’s most populous county can be unsealed and reviewed by a group of electors claiming Fulton County election workers counted fraudulent ballots.
Read more

The reforms will save millions of motorists £35 a year in reduced premiums, the government says.
Read more

Flights evacuating diplomats and civilians in Afghanistan began departing again from Kabul's international airport on Tuesday after they were paused for several hours on Monday due to a chaotic scene of thousands of Afgha...
Read more

"The Sex Lives of College Girls" is the new HBO Show from "Never Have I Ever" creator and star, Mindy Kaling.
Read more

The Ashes: Joe Root’s best boundaries as the England...

Watch the best boundaries as England captain Joe Root passes 50 on the third day of the second Ashes Test in Adelaide.
Read more

Mistrusted Institutions Are Pushing America into a Debt Crisis

Until regulatory and social service elites share their burden of the debt, America will continue to edge towards financial crisis. The post Mistrusted Institutions Are Pushing America into a Debt Crisis appeared first on The American Conservative.
Read more

Kanye West barely said a word during his album listening session Thursday night, but the mercurial rapper still had most attendees standing on their feet while hanging on every word of his new project
Read more

Shane Fuhrman, the mayor of Silverton, Colorado, announced at a trustee meeting last week that the Pledge of Allegiance will no longer be recited due to “direct and indirect threats,” prompting at least one trustee to challenge his ruling before attendees rec…
Read more

BET is forming the next big R&B girl group with the help of members from platinum-selling ensembles like 702, Total, Danity Kane, 3LW, Blaque and Cherish
Read more

Defusing a potential landmine it planted last year, the 9th U.S. Circuit Court of Appeals on Tuesday held that individuals with disabilities can sue over practices that have a discriminatory effect on them even if no discrimination was intended.
Read more

California café charges patrons $5 if they wear a...

A cafe in Mendocino, Calif. Is charging patrons a $5 fee if they are caught wearing a mask or “bragging” about their coronavirus vaccine.
Read more

A Fort Hood soldier has been reported missing after she didn’t show up for work on the base, officials said.
Read more

Business owners and residents of an Atlanta neighborhood say they are being terrorized by a “Machete Man” who wields weapons in public and is accused of squatting in the neighborhood following an eviction moratorium stemming from the pandemic.
Read more

Michigan mom of 3 saves group of girls from...

Alyssa DeWitt went to the beach with her three young children last week for a relaxing afternoon in Manistee, Mich., but her beach day turned upside down when she noticed a group of girls who swam too far out in the water and started waving for help.
Read more

What QAnon Documentaries Reveal About How Conspiracies Flourish

And, in the process, how far their insidious ideas are beyond the media’s control.
Read more

Desperate for vaccines amid surge, Iranians flock to Armenia

Hi, it’s Katie and I’m back in the U.S. after two weeks of conference reporting in Portugal. I’ll recap the trip below and also look at a cross-border bidding war over a tech asset in Europe and a hiring U-turn at Apollo.Today's top stories
Read more

Schumer points to debt incurred under Trump to highlight...

Senate Majority Leader Charles Schumer (D-N.Y.) is stepping up pressure on his Republican colleagues to help raise the debt ceiling, while pointing to debt incurred under the prior administration to underline the need for...
Read more

Dressel tossed his gold medal from a winning relay to a team mate.
Read more

Researchers from Penn State have found that those experiencing sleep apnea are at a higher risk of sudden death and death from cardiovascular conditions.
Read more

Voters are turning to outsider candidates to run their cities in a political earthquake that has ousted incumbents and shattered expectations across the country....
Read more

More than 30,000 people fled Cameroon to neighboring Chad because of inter-communal clashes in the north of the country this month, the United Nations Refugee Agency said.
Read more

DNC chair: Texas election overhaul measure ‘one of those...

Money Stuff: Be Careful With Your Financial Influence

So on the one hand, the state of Massachusetts fined Massachusetts Mutual Life Insurance Co. $4 million for letting Keith Gill do the GameStop thing:
Read more