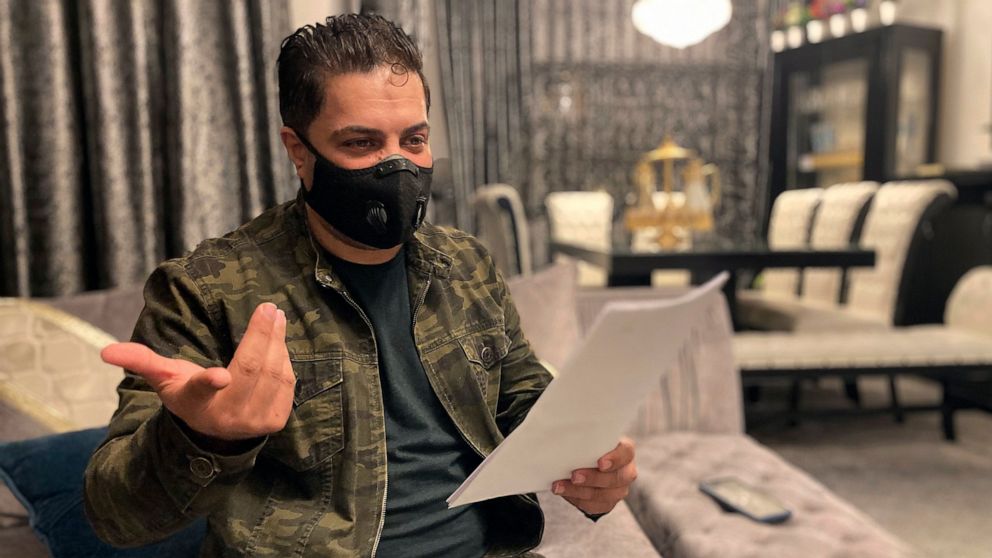 AMMAN, Jordan — Samer Qraih had a good job working at a bank in Amman, Jordan, and decided to start his own business importing hybrid vehicles in 2017. But a year later, the Jordanian government raised taxes, and a subsequent strike by car dealers forced the 45-year-old father of four to shut his business for a year.

He sank into massive debt and couldn’t pay rent on his business. In most countries, that would be difficult enough. But after his landlord filed suit, Qraih was sent to prison for nine months.

Hundreds of thousands of Jordanians like Qraih are faced with incarceration because of draconian debt laws that violate international human rights law, according to the report published Tuesday by Human Rights Watch.

The New York-based rights group found that more than 250,000 Jordanians face possible imprisonment due to debt delinquency, and around 16% of the countrys prison population was locked up for failing to pay debts in 2019.

The coronavirus pandemic has battered the Jordanian economy, which is projected to contract by 5.5% in 2020, while poverty is to grow by 11%, according to the World Bank. The road to recovery is expected to be slow.

Jordan fails to guarantee its citizens and residents an adequate standard of living and does not have a functioning system of social security, the report states.

People who fail to repay a debt can face to up to 90 days in prison, and up to a year in prison for a bounced check, the report said. The number of Jordanians wanted for debts grew tenfold between 2015 and 2019.

The organization called for legal reforms that would provide protections for the poor and more effective legislation for bankruptcy. Most countries outside the Middle East have abolished imprisonment for debt, the group said.

“Debt imprisonment targets those without the ability to pay and helps create cycles of endless debt, the report said.

Since his release, Qraih has gone back to selling cars and rebuilding his life.

I work from early morning until the end of the day, I pay installments for the landlord, he said. But I am still threatened, he can send me back to jail anytime.

The Jordanian government did not immediately respond to a request for comment. 6 charged with bid to smuggle arsenal to Mexican drug cartel

U.S. considering controlling exports to Russia if there is an invasion of Ukraine

EXPLAINER: Who are 3 officers on trial in Floyd’s killing?

The government mulls how to deal with a lack of drivers amid warnings of food supply problems.
Read more

The California governor has been accused by the Consumer Watchdog and FracTracker Alliance for not making communities safer from oil production.
Read more

Fulham manager Scott Parker praises his team's "endeavour and work ethic" but admits they "fell short in certain moments" during their 3-1 defeat at Southampton.
Read more

Jeb Bush: Religious minorities should be given preference

The decision is part of a broader reevaluation by the Biden administration of the federal government’s approach to these facilities.
Read more

Allan Saint-Maximin's fine equaliser lifted the pressure on Newcastle boss Steve Bruce as his side earned a point against Leeds.
Read more

The World Health Organization said a coronavirus variant found in France hasn’t become much of a threat since it was first identified in November.
Read more

Purdue Pharma has defeated a request to pause the implementation of its reorganization plan that provides legal protections to the Sackler family members who owned it.
Read more

A Paper Company Wants to Make a Wooden Rival...

Japan’s Nippon Paper is advancing technology that it claims could one day be capable of powering vehicles.
Read more

The Chinese government, along with U.S. allies in Europe, continues to support a return to the 2015 nuclear deal with Iran.
Read more

Members of the LGBTQ community are "appalled" after a transgender individual exposed themselves in the women’s section of a Los Angeles spa while young girls were reportedly present, Fox News contributor Tammy Bruce said Monday.
Read more

The Race to Put Silk in Nearly Everything

The fiber has been considered a “miracle material” for anything from body parts to food. Has the revolution finally arrived?
Read more

Federal Reserve Chair Jerome Powell will tell lawmakers Wednesday he expects inflation to remain high for several months before cooling off as the U.S. economy continues to recover from the coronavirus pandemic....
Read more

Get 5% off Target gift cards now to spend...

Target is launching its annual Deal Days event, featuring three full days starting June 20 and running until June 22. To help you get ready for the event, Target is also offering 5% off digital GiftCards for Target.com now until June 19.
Read more

While Apple's next iPad might launch with very little tablet competition, Xiaomi's new Mi Pad 5 could challenge it.
Read more

Five things to know about the California oil spill

An oil spill off the coast of southern California has sent up to 144,000 gallons from an oceanic pipeline into the sea, closing beaches and serving as a reminder of how U.S. energy sources can be calamitous to the environment.The spill isn...
Read more

President Biden on Friday described the September jobs report as a sign of steady progress in the U.S.'s economic recovery amid the coronavirus pandemic.Speaking to reporters at the White Hous...
Read more

Bally Sports North looks around for the top tweets and Instagram posts from the past week.
Read more

The head of Maryland's NAACP on Sunday lambasted Gov. Larry Hogan's posthumous pardon of lynching victims as "political posturing," criticizing the Republican governor for issuing a blanket pardon of dozens of the state's Black victims even though many were n…
Read more

Manchin didn’t sign off on framework, no ‘rush’ to...

Sen. Joe Manchin (D-W.Va.) said he didn't sign off on a framework for a $1.75 trillion social spending and climate bill before it was released from the White House, and that he didn't think there was a "rush" to get a dea...
Read more

U.S. personal spending rose at a steady pace in September, reflecting further growth in outlays for services and suggesting modest momentum for the...
Read more

Zimbabwean with football dreams to be kicked out of...

Christopher Arundell grew up in the UK but after doing time in jail is being deported to Zimbabwe.
Read more

New cannabis coalition wants to influence how — not...

The group includes representatives from the alcohol, tobacco and insurance industries.
Read more

Former executive who says he was fired because he...

A former executive at a hospital who said he was fired because he is a white male was awarded $10 million by a jury in North Carolina. David Duvall alleged he was fired in 2019 by Novant Health, ...
Read more

(AP) -- The shot has been replayed millions of times already on video and social platforms. And considering it was from the stands before a game, it obviously didn’t even count.
Read more

What does free antivirus software do&quest;

Lots – in a word. Stick to reputable vendors and you’ll get plenty of mileage out of a freebie antivirus.
Read more

Calls are made for a NI-based inquiry into handling of care home residents during the pandemic.
Read more

Advocates Struggle to Control Police Use of Surveillance Tech

A key backer of a 2018 Oakland law to rein in tools like automated license plate readers says the city is not following the rules.
Read more

Malaysia’s new Prime Minister Ismail Sabri Yaakob is about to be sworn in, bringing back the rule of the country’s longest-governing political party
Read more

President Biden, Vice President Harris and their spouses volunteered at a Washington, D.C., non-profit on Tuesday ahead of the Thanksgiving holiday, preparing meals for those in need.Biden, Harris, first lady Jill...
Read more

A Democratic senator vital to the fate of President Joe Biden’s $3.5 trillion plan for social and environmental spending says he won’t support even half that amount or the ambitious timetable envisioned for passing it
Read more

Less than one-third of African nations have vaccinated 10...

Less than one-third of African nations have been able to reach a goal of fully vaccinating 10 percent of their population, the World Health Organization (WHO) ...
Read more

Released this week, Note Yourself is an example of what new apps should aim for in 2022.
Read more

California’s population dropped for the first time in the...

California's population fell in 2020 for the first time since the state population estimates started being recorded due to Covid-19 deaths, a decline in immigration and a lower birth rate, according to the California Department of Finance.
Read more

At least six people were shot and three were killed in an early morning shooting in Cleveland, according to authorities.
Read more

Merrill Lynch Puts Down the Phone

N Ireland leaders call for calm after night of...

Rioters set a hijacked bus on fire and hurled gasoline bombs at police in Belfast in the fourth night of violence in a week in Northern Ireland, where Brexit has unsettled an uneasy political balance
Read more

A bipartisan group of lawmakers is struggling to resolve a disagreement on public transit funding. Sen. Warner believes the bill could be finalized on Monday.
Read more

PC Geoff Marshall climbed on to the damaged dam and placed hundreds of sandbags on the structure.
Read more

A New Tool Wants to Save Open Source from...

Vice President Harris has some ground to make up in order to be perceived more favorably by the public, a complicating factor for the Biden administration as it maps out its midterm strategy. Six months into office, polls indicate Harris is...
Read more

Firefighters are scrambling to control an inferno in southeastern Oregon that's spreading miles a day in windy conditions as wildfires across the U.S. West strain resources
Read more

More than 350,000 people are facing “catastrophic conditions” in the Tigray region of Ethiopia, according to United Nations agencies.
Read more

Boy killed by dog in Cornwall caravan asked for...

Frankie Macritchie asked his mum to leave the dog when she went to check on him, inquest hears
Read more

President Biden said Russian President Vladimir Putin knows there will be consequences if there are cyberattacks on U.S. infrastructure. Ed O'Keefe has the details.
Read more

The Ashes: Joe Root’s best boundaries as the England...

Watch the best boundaries as England captain Joe Root passes 50 on the third day of the second Ashes Test in Adelaide.
Read more

This modern smart floor light can be as connected as you want it to be. Govee Lyra has all the Google and Alexa voice commands with the app features it needs but can also function just fine with its included remote control.
Read more

How the US Might Reach Biden’s New Climate Goal

The President wants the country to halve its greenhouse gas emissions by 2030. Here's what it will take to actually succeed.
Read more

The Scottish government says it is making the move due to "major uncertainties" still to be resolved after Brexit.
Read more

Parties, pageantry and a four-day bank holiday weekend are among plans to mark the Queen's 70-year reign.
Read more

One of the worlds biggest ocean carriers is dangling incentives of as much as $200 a container for help in clearing the backlog...
Read more

Tackling The Rise Of Crime In U.S. Cities

Micromax In 1 budget phone specs tipped ahead of launch