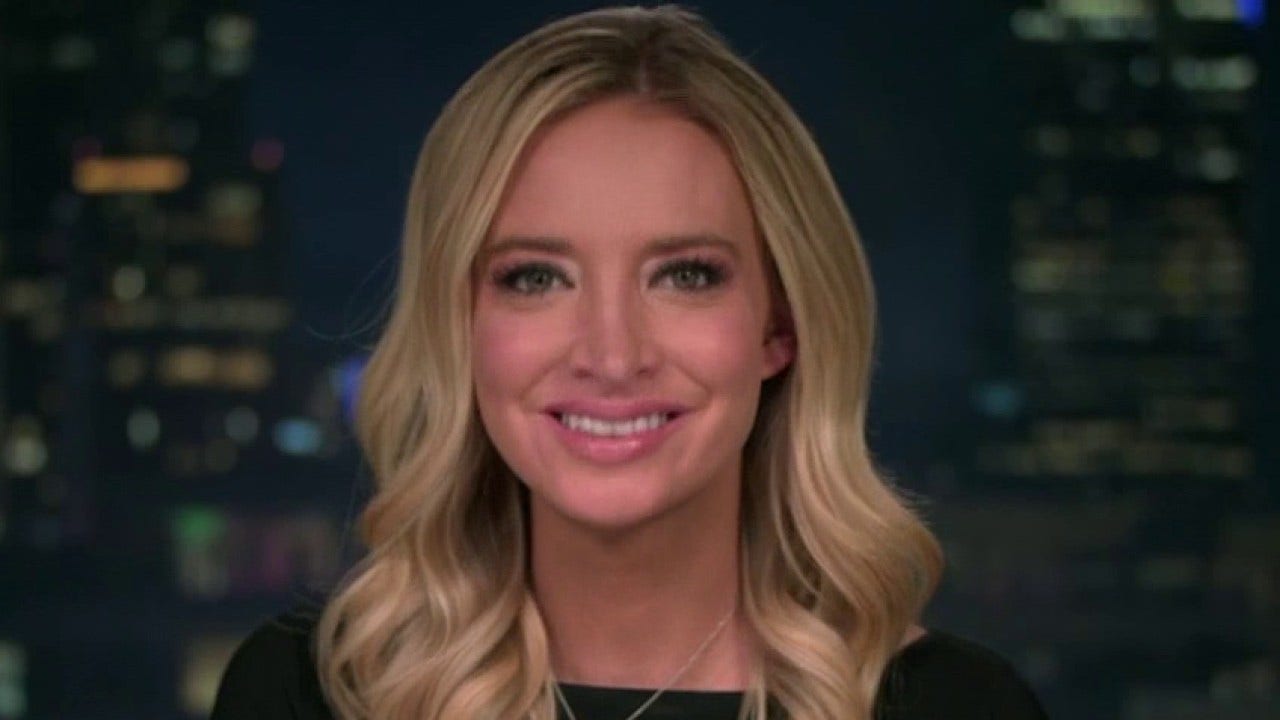 MCENANY: These are really important things that absolutely influence an election, and Democrats are trying to memorialize it, federalize it with H.R. 1. This is one of the most important pieces of legislation, I think, in the next two years that we’ll see.

We’ve got to stand against it because integrity matters. State legislatures should be paving the way for elections, not lawless, undemocratic, unconstitutional actors like the secretaries of states who are Democrats who are flouting the Constitution.

What I hope to happen in any election is for the vote of the American people to be accurately counted and that vote — be it a Democrat, be it a Republican, whatever it may be — to be accurately put forward and to be honored and respected.

What Nancy Pelosi is doing is flouting the will of the people, throwing it away. Who she wants should be the person who is there saying ‘I run elections, I federalize elections,’ where all I want is for the vote of the American people to be truly and accurately counted.” President Joe Biden paid tribute to the men and women who gave their lives in service to their country during a ceremony at Arlington National Cemetery on Memorial Day, speaking in deeply personal terms about overcoming loss and the importance of upholding de…
Read more

Inside the controversial US gunshot-detection firm

BBC News has been given access to ShotSpotter, the controversial US technology company that detects gunshots.
Read more

The push in Democratic cities to pay high-risk criminal offenders to refrain from committing violent crime speaks to "what a mess our culture is in," Trey Gowdy said on his show Sunday.
Read more

National Geographic says the world has a fifth ocean

National Geographic, one of the world's pre-eminent and most visible mapmaking groups, has officially decreed the existence of a fifth ocean. Called the Southern Ocean, it's the body of water that surrounds Antarctica.
Read more

Nearly two million people have been urged to evacuate their homes amid heavy rainfall.
Read more

R. Kelly’s Official YouTube Channels Shut Down, But Others...

R. Kelly's official channels were reportedly deleted "due to a potential to cause widespread harm."
Read more

UN will maintain aid to Afghanistan, Taliban says after...

A Taliban spokesperson on Sunday said the U.N. promised continued aid to the Afghan people during a meeting held in Kabul, ...
Read more

Tokyo Olympics: Where are Team GB’s English medallists from?

With day 11 of the competition over, the North West currently leads the way when it comes to medals.
Read more

Geena Davis on increasing opportunities for women on screen

Thirty years after the Oscar-winning actress starred in the transcendent tale of female friendship "Thelma & Louise," Geena Davis is still fighting to improve opportunities for women in the film industry. She talked with correspondent Tracy Smith about seekin…
Read more

A whole lot of sound and fury was followed by perpetual paralysis this week on the Hill as Senate Democrats tried for a second time to pass a voting rights bill, not a single Republican voted for it, and it was blocked from getting to the floor.
Read more

A Scottish Ambulance Service helicopter was among emergency services called to the scene near Dunblane.
Read more

A federal judge in Alaska ruled against the Trump administration's approval of a massive oil drilling project in the state, arguing that the Interior Department did not adequately measure the true environmental impa...
Read more

Newsom dodges questions on Thurmond’s troubles — but for...

And: California will be the first state to mandate Covid vaccines for all public school students and staff.
Read more

The Environmental Protection Agency (EPA) will soon unveil a plan to address what it sees as “inadequate” regulations on a class of toxic chemicals that disproportionately affects vulnerable groups, according to documents obtained by The Hill.The...
Read more

A father is outraged after his daughter, Hannah Eimers, was billed for a guardrail that he says contributed to her death. Eimers died in a car crash last November in Tennessee. The father believes his daughter would still be alive if the X-Lite guardrail stop…
Read more

The U.S. added a disappointing 199,000 new jobs in December, less than half of what economists were expecting. However, in the last month of 2021, the unemployment rate fell to its lowest point since the start of the pandemic. Diane Swonk, the chief economist…
Read more

Covid-19: No early indoor reopening for pubs and loneliness...

Thailand is set to expand its quasi-lockdown measures to its regions that are hardest-hit by the coronavirus pandemic and home to about 40% of the population.
Read more

Lesson from Argentina: Awaken the Lions

Not speaking clearly may be the first problem of politics. It is much like the old axiom, often misattributed to Burke, that for evil to triumph it is only necessary for good men to do nothing. In much of the world, conservatism has been living in fear since …
Read more

Uber Says Its UK Drivers Are ‘Workers,’ but Not...

The ride-hail giant shifts its stand following a court ruling, part of a global push for a “third category” of workers.
Read more

Michael Murray, Mike Ashley's future son-in-law, must more than double the share price to get the deal.
Read more

Streatham attack: Officer ‘feared for his life’ in terrorist...

An armed surveillance officer describes the moment a terrorist ran at him with a knife in south London.
Read more

Novak Djokovic back in detention, continues to fight deportation

Novak Djokovic was back in immigration detention Saturday after his legal challenge to avoid being deported from Australia for being unvaccinated for COVID-19 was moved to higher court.
Read more

An Alaska Native artist has created a new stamp for the U.S. Postal Service
Read more

Doctors in Bosnia are bracing for a new wave of the coronavirus in the Balkan nation, which has a low vaccination rate and has been among the hardest hit countries in Europe earlier in the pandemic
Read more

On The Money: IRS to start monthly payments of...

Happy Monday and welcome back to On The Money, where we didn't realize we still needed to ...
Read more

Angelina Jolie and The Weeknd continue to fuel dating...

The actress and the singer were snapped leaving Giorgio Baldi restaurant in matching all-black outfits and masks.
Read more

Here are some upcoming events of interest to the immigration law community. All times are local unless stated otherwise.
Read more

President-elect Donald Trump's deal with Carrier will keep hundreds of Indiana factory jobs from leaving the United States. Weekly Standard director Michael Graham joins CBSN to discuss the impact of this deal, and how the president-elect is shaping his Cabin…
Read more

Sen. Tim Scott (R-SC) said he was upset by how some social media users reacted to his rebuttal speech on behalf of Republicans following President Biden's address to a joint session of Congress on Wednesday evening....
Read more

A report from the Star Tribune details the difficulties that businesses damaged during the protests have faced.
Read more

With help from Anne Brandes SETTING THE PACE State Attorney General Maura Healey raised $207,000 in the first 24 hours of her campaign for...
Read more

Zillow and its affiliate Trulia are illegally favoring listings by brokers who belong to the National Association of Realtors, a real estate startup alleges.
Read more

Republicans are blasting Ted Cruz for Wednesday night's speech at the Republican National Convention. The presidential candidate who finished second to Donald Trump did not endorse the GOP nominee and left the stage to boos from the crowd. But Democrat Hillar…
Read more

Reports of measures Boris Johnson is taking in a bid to hold onto his premiership dominate Monday's papers.
Read more

The White House is putting some heat under Congress to strike a deal on the annual government funding bills as negotiations across the aisle have failed to make much headway in recent months.The ...
Read more

From macOS Montery to iOS 15, here are the biggest new updates coming to your iPhone, Mac, Apple Watch and more.
Read more

The Minnesota Twins and center fielder Byron Buxton have agreed on a seven-year, $100 million extension, according to multiple reports on Sunday.
Read more

UK plastic waste being dumped and burned in Turkey,...

20 years ago, economist Jim O'Neill coined the 'BRICs' acronym as Brazil, Russia, India and China rose in political and economic stature. Here's what he thinks about the idea now in light of their mixed fortunes.
Read more

Vanessa Bryant, the widow to basketball legend Kobe Bryant, said that she didn't learn about her husband and daughter's deaths until hours after the fatal helicopter crash in Jan. 2020. Bryant's ...
Read more

Covid: Weekly tests for all in England, and cabinet...

The California governor has improved his position ahead of Tuesday’s recall election even as President Joe Biden has slipped.
Read more

India is experiencing a rapid surge in newly confirmed cases of coronavirus nationwide. On Saturday, the country reported more than 4,100 deaths, shattering its previous single-day record. Parth M.N., an independent journalist based in Mumbai, joined CBSN to …
Read more

In San Francisco, homeless tents, open drug use, home break-ins and dirty streets have proliferated during the pandemic
Read more

Ex-MP Betty Williams’ husband ‘had do not resuscitate order’

Former Conwy MP Betty Williams says neither she nor her husband gave consent to the decision.
Read more

Priti Patel says her heartache and that of others could be summed up as: 'She was just walking home'.
Read more

Enrolments have gone up by over 2,000% since Rose Ayling-Ellis has been on the show, one firm says.
Read more

Belarusian air traffic control refused a request by a Ryanair pilot to contact the airline after being told of an alleged bomb threat, leaving him with no alternative but to land in Minsk, the Irish carrier said in a letter seen by Reuters.
Read more

Arenado, Sosa homer as Cardinals finish spring with another...

The St. Louis Cardinals didn't hit much in their Grapefruit League finale, but Nolan Arenado did clear the fence for the first time as a Cardinal.
Read more

Mark Roth, a pro bowling champion from the 1970s and 1980s who ranks among the sport’s greatest names, has died, according to reports. He was 70.
Read more

The pandemic has changed TV viewing patterns, and awards shows are suffering