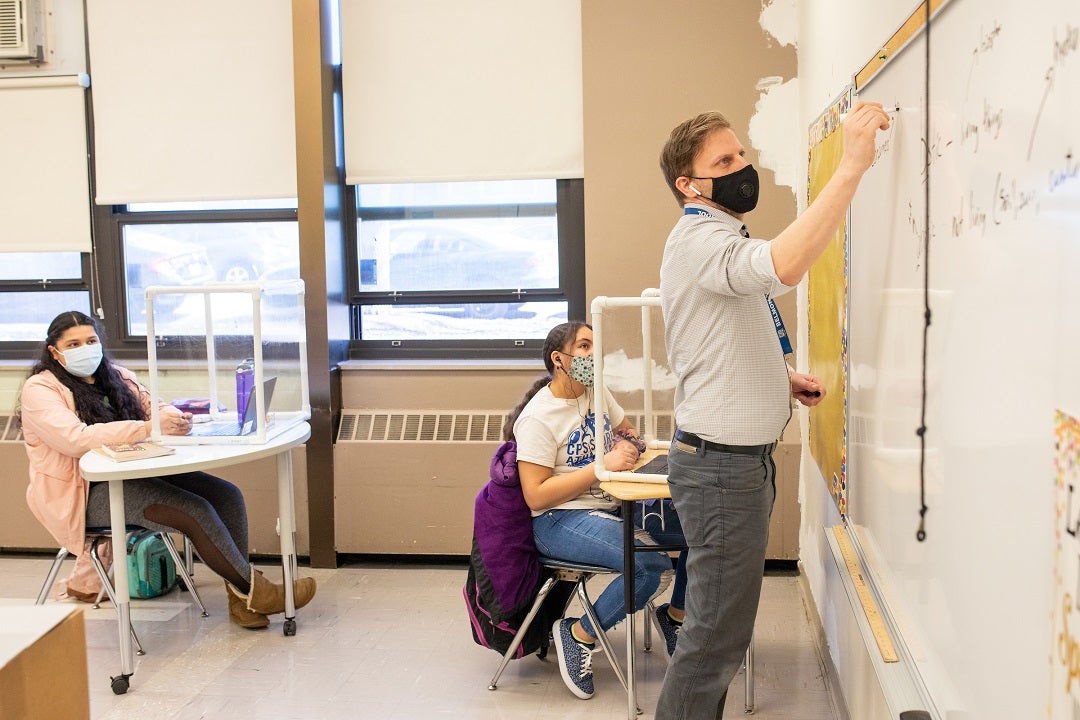 Tracking how many Chicago Public Schools teachers have been vaccinated against COVID-19 has been a challenge, in part, because the teachers union asking its members not to inform district officials, according to media reports.

The school district and the Chicago Teachers Union have been involved in a public battle over whether to resume in-person instruction after months of virtual learning. The dispute centers on what the union has deemed inadequate safety protocols.

The district opened its doors this month to tens of thousands of students from kindergarten to through eighth grade. The move came after weeks of tense negociations between district and untion leaders.

The district has set up four vaccination sites. As of Sunday, it said it offered or scheduled 14,000 vaccination appoints, with just over 5,600 vaccinations confirmed.

However, district officials are having issues tracking how many staffers received vaccines, WBBM-TV reported. It can’t tell how many have received treatments at non-CPS sites.

Collecting the best data available is made harder, he said, by the teacher’s union asking its members to wait to respond to a CPS vaccination survey.

Messages to the district and teacher’s union were not immediately returned.

Last week, Sharkey said he believed 11,000 CTU members have received at least one vaccine shot. The union has around 25,000 members, oh which 22,000 are employed as teachers.

The tense battle over the reopening of city classrooms for in-person learning during the pandemic between with the teachers union and Chicago’s mayor was thrown into the national spotlight last month.

Mayor Lori Lightfoot, a Democrat, said her office has maintained peace with almost every single [organized labor] unit, except for the Fraternal Order of Police, and the Chicago Teachers Union (CTU), which she said has aspirations “akin to a political party.”

“When you have unions that have other aspirations beyond being a union, and maybe being something akin to a political party, then theres always going to be conflict,” she said during an interview with the New York Times.

“I think, ultimately, theyd like to take over not only Chicago Public Schools, but take over running the city government,” Lightfoot added. “Thatll play itself out over time. I dont really spend time, and certainly not in the middle of a pandemic, worrying about the politics. But politics intrudes, always.” LeBron James fined $15,000 for making an “obscene gesture” during game

Scotland’s papers: Christmas ‘at risk’ and MP referred to...

Paul Newman memoir left unpublished to come out next...

Amazon has officially acquired MGM and its James Bond back catalog - but it's apparently unlikely to affect No Time To Die's release.
Read more

PepsiCo plans reduction in use of virgin plastic

PepsiCo announced on Wednesday that the company will begin to reduce the use of virgin plastic and expand its SodaStream sparkling-water business in an effort to combat plastic waste.The brand launched the effort u...
Read more

Police chief and rugby union coach Karen Findlay wants to use her experience to help improve the sport's diversity when she leaves Harlequins.
Read more

And President Joe Biden finds himself trapped in a coronavirus malaise.
Read more

A Hong Kong court sentenced the first person convicted under a national security law imposed by Beijing to nine years in prison, a ruling that illustrates the high stakes for dozens of pro-democracy activists awaiting similar trials.
Read more

Rangers must treat every game like an Old Firm derby in order to win the double says manager Steven Gerrard after their 2-0 Scottish Cup last-16 win over Celtic at Ibrox.
Read more

All-rounder Jimmy Neesham extends his Essex deal to include the One-Day Cup and the County Championship game with Derbyshire.
Read more

It’s All About SPACs (Radio)

Live from New York, this is news for the new media. Watch global news and go deeper with original shows on business, technology, politics, and culture.
Read more

Carnlough: Sea swimmer dies after getting into difficulty

Emergency services were called to the scene in Carnlough at about 13.30 BST on Wednesday.
Read more

Covid-19: Quarantine-free travel from France, and NHS waits could...

Huge Landslide Crashes Down Mountainside Onto Roadway in China

Throughout 2021, the area has experienced an increase in torrential rainfall, flooding, and landslides.
Read more

Covid: All over-50s invited for jab in England

This is the final group on the priority list which covers 99% at high risk from Covid-19.
Read more

U.S. to reduce use of private prisons

The Department of Justice has announced its plans to phase out the use of private prisons in the United States. CBS News justice reporter Paula Reid joins CBSN with more details.
Read more

"Modern Family" alum Eric Stonestreet opened up about missing his castmates and recently trolling critics who thought his fiancée was too young for him.
Read more

Human rights activists submitted evidence to the International Criminal Court (ICC) on Tuesday calling for an investigation into abuses against migrants in Libya traveling across the Mediterranean Sea to Europe....
Read more

On the road again: Travelers emerge in time for...

Millions of Americans are loading up their cars or piling onto planes, determined to reclaim Thanksgiving traditions that were put on pause last year by the pandemic
Read more

The telecoms giant says its new full-fibre investment strategy could create up to 7,000 jobs.
Read more

Abbie Quinnen says trolls have targeted her after she suffered burns when a social media stunt went wrong.
Read more

The Supreme Court on Monday denied appeals from three people who sought to have their right to own guns reinstated after being convicted of nonviolent crimes, a move that disappointed gun-rights advocates.The denials, which were issued without...
Read more

A number of protests were staged around Brazil over the billions spent on hosting the 2014 World Cup. Elaine Quijano witnessed the tension first hand, and met a group working to protect demonstrators.
Read more

Several moments stood out at Derek Chauvin's murder trial, including testimony from bystanders who said they felt guilty for not being able to help George Floyd who was pinned under the officer's knee
Read more

Europe Is Showing How Carbon Credits and Capitalism Can...

Europe's system was written off as a failure a decade ago, but surging permit prices are now changing real-world industries.
Read more

Welcome to Monday, Asia. Here’s the latest news and analysis from Bloomberg Economics to help you start the week.
Read more

COP26: PM warned over aid cuts ahead of climate...

Eilish McColgan secures a place at her third Olympics by taking gold in the European 10,000m Cup.
Read more

Biden says he does not regret Afghanistan withdrawal

President Biden on Tuesday said he does not regret his decision to pull U.S. forces out of Afghanistan amid reports of rising civilian casualties as the Taliban makes gains in the country.
Read more

India’s Covid-19 Cataclysm Should Be Lesson to Others

Police said their investigation found that the tragedy was likely not intentional but a horrible accident that was caused by the driver's health ailments.
Read more

The new Australian rival came from behind to beat America's best women's swimmer of all time.
Read more

Covid: Up to one in four admitted to hospital...

The government says counting all patients who test positive is vital because of the impact on the NHS.
Read more

The United States has administered 317,117,797 doses of COVID-19 vaccines in the country as of Saturday morning and distributed 379,003,410 doses, the U.S. Centers for Disease Control and Prevention said.
Read more

GOP opposition is hardening over a massive infrastructure plan and a revamp of policing laws, scrambling the prospects of two of President Joe Biden's top domestic priorities at a crucial juncture on Capitol Hill.
Read more

Floyd’s death sparked sometimes violent protests in Minneapolis and beyond and led to a national reckoning on racial justice.
Read more

An order by Thailand's government that restricted the country's coronavirus news reporting was temporarily blocked by a civil court in Thailand on Friday.In late July, the government issued an or...
Read more

The British reggae singer has "reluctantly" quit music after having a seizure earlier this month.
Read more

Hurricane Sam forecast to rapidly intensify in the Atlantic

Sam is just the latest in an exceptional number of tropical systems that have rapidly intensified in the past two seasons.
Read more

Standing at higher than 21m in the Danish town of Blokhus, it is even decorated with Covid particles.
Read more

WHO: New coronavirus cases worldwide appear to be stabilizing

The World Health Organization (WHO) on Tuesday in a weekly assessment revealed that the number of coronavirus cases globally is stabilizing after months of steady increase....
Read more

Cardinals trim roster to 36 with Opening Day one...

The St. Louis Cardinals announced Thursday that they have optioned or re-assigned a total of eight players.
Read more

With the launch of The Hundred on the horizon, the T20 Blast begins on Wednesday with the aim of providing fireworks of its own.
Read more

Rate the players as Livingston host Hamilton and Hibernian visit Ross County in the only Scottish Premiership games this weekend.
Read more

Hauliers and poultry workers to get temporary visas

Some 10,500 foreign lorry drivers and poultry workers will be able to work in the UK until Christmas Eve.
Read more

New York City will honor the 30,000 lives lost to COVID-19 with memorial services throughout the day.
Read more

Johnson & Johnson is splitting into two companies, separating the division that sells Band-Aids and Listerine, from its medical device and prescription drug business
Read more

Pablo Andujar produces a sensational comeback to stun world number four Dominic Thiem in the first round of the French Open.
Read more

The internet is set for a historic speed boost

The backbone of the internet is set for an upgrade, courtesy of a data transmission protocol proposed by Google.
Read more

Biden to focus on Covid-19, infrastructure, climate and cybersecurity...

President Joe Biden is holding his second full Cabinet meeting on Tuesday to mark six months in office, and is expected to focus the discussion on Covid-19, infrastructure, climate and cybersecurity, a White House official tells CNN.
Read more

Microsoft Teams is finally fixing one of its most...

Hosts can now block all Microsoft Teams video apart from their own.
Read more

Earnings Day Matters for AMC Even If Its Actual...

It’s been a cruel summer for the self-described “apes” who make up the diehard shareholder base of the movie-theater chain AMC Entertainment Inc. and joined forces to drive its stock to heights that Wall Street analysts consider absurd. Its earnings report la…
Read more

The owner of Coach says its strong sales in China aren’t under threat from President Xi Jinping’s push to narrow his country’s wealth gap because the brand’s customers are mainly middle class.
Read more

One California school district blocked critical race theory in its classrooms this week – banning what the board defined as a “fatally flawed” ideology “based on false assumptions about the United States of America and its population.”
Read more

Courtney Love says she 'almost died' in the hospital from anemia

Meghan Markle, Prince Harry could be headed for ‘divorce,’ Duchess of Sussex’s...