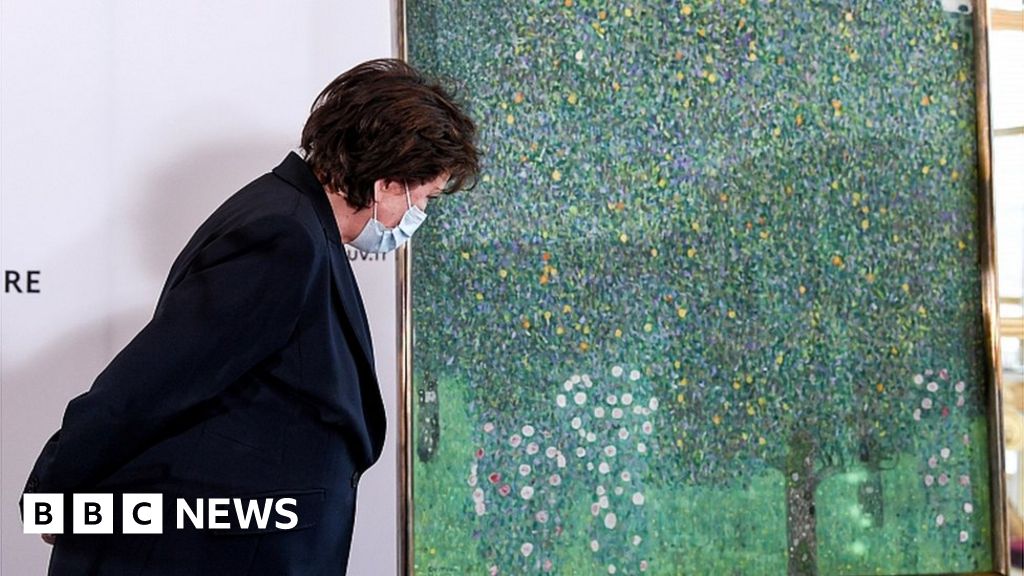 France is to return a painting by the Austrian artist Gustav Klimt to the heirs of the Jewish family that was forced to sell it by the Nazis.

French culture minister Roselyne Bachelot said restoring it to its rightful owners was an acknowledgement of the crimes they suffered.

She said the painting bore witness to the “broken lives” of the Nazi era.

The French state bought the work, its only Klimt, in 1980 without realising its history.

The pre-war owner of Rosiers sous les Arbres (Rose Bushes Under the Trees) was Nora Stiasny, from a well-known Austrian Jewish family. She had inherited it from her uncle, the Austrian industrialist and art collector Viktor Zuckerkandl, Ms Bachelot told a news conference at the Musée d’Orsay in Paris.

Ms Stiasny was forced to sell it in August 1938 at a knock-down price to survive financially, months after the Nazis annexed Austria.

In 1942 Ms Stiasny was deported to a concentration camp in Nazi-occupied Poland, and died the same year.

The art dealer held on to the masterpiece until his death in the 1960s. France bought it at auction in 1980 for the Musée d’Orsay.

“Today we know that it is indeed a work that was looted in Austria in August 1938,” Ms Bachelot told reporters.

“The decision we’ve taken is of course a difficult one. It results in taking a masterpiece out of the national collections which is the only painting by Gustav Klimt which France owned.

“But this decision is necessary, essential. Eighty-three years after the forced sale of this painting by Nora Stiasny, this is the accomplishment of an act of justice.”

The beneficiaries will be the descendants of Nora Stiasny’s sister. The French government will have to pass a bill to allow it to be released from the national collection and returned to the family, Ms Bachelot added.

In 2017 a floral Gustav Klimt painting was sold for nearly £48m at Sotheby’s in London.

In 2020, Claudia Maga told how, as an art student, she discovered that a portrait by Klimt had been painted over another work by the artist which had not been seen since 1912. US Postal Service announces holiday shipping deadlines: How to make sure packages arrive by Christmas

The tail of 2005 QN173 is long enough to reach from Earth to the moon and back again.
Read more

The Duke of Edinburgh became involved in Muscular Dystrophy UK due to a friend's son having the condition.
Read more

Fifa says it "regrets" the scenes leading to the suspension of Brazil and Argentina's World Cup qualifier on Sunday.
Read more

Ikea France on trial over claims it spied on...

Democrat rips Justice for not appearing at US gymnastics...

Sen. Richard Blumenthal (D-Conn.) on Wednesday ripped the Department of Justice (DOJ) for snubbing a request to appear at a committee hearing on the bombshell inspector general report that identified the FBI's failu...
Read more

Until now, the recall-threatened governor had stopped short of requiring teacher vaccinations for the upcoming academic year.
Read more

Arsenal boss Mikel Arteta reflects on 'special day' after watching his side crush Spurs at the Emirates.
Read more

Sales for Ford and GM vehicles are seeing some record sales. Automakers are hoping the drop in sales bolsters demand for vehicles. Manuel Bojorquez reports from Houston, Texas where one gas station is selling gas for $1.97.
Read more

Rep. Karen Bass to run for mayor of Los...

Rep. Karen Bass (D-Calif.) will run for mayor of Los Angeles, according to a ...
Read more

‘Zombie fires’ that can survive winter could become more...

A new report finds that while so-called "zombie fires" are currently responsible for a small portion of the land scarred by wildfires today in the world's boreal forests, they could become more prevalent as the climate warms.
Read more

Chucky first look: get a killer tease of horror...

The DC Extended Universe movies, ranked – including The...

From Batman Vs Superman to The Suicide Squad, which of the DC Comics movies is best?
Read more

The Senate should support innovation and pass the Lummis-Wyden-Toomey...

Sens. Wyden, Toomey and I authored this amendment because we care deeply about the future of American innovation and want to see thoughtful debate and good public policy around these issues. If we fail now, it will have a real impact, not only on innovators t…
Read more

In some ways the circumstances for a minimum wage increase are better since Democrats now control the White House in addition to Congress and President Biden made the minimum wage a visible part of his campaign.
Read more

Facebook changes its name to ‘Meta’ amid backlash to...

The world's largest social media company faces growing trouble in Washington and other world capitals following the disclosure of a trove of internal documents by whistleblower Frances Haugen.
Read more

Atlanta Braves outfielder Adam Duvall put the team up four runs in a pivotal moment in the first inning of Game 5 of the World Series Sunday night.
Read more

The Fossil Gen 6 smartwatch running Wear OS 3.0 has already been confirmed by Fossil itself, but not the release date. Based on an email sent to customers it seems that Monday, August 30 could be the big day.The email, spotted and reported by Droid Life, says…
Read more

Fly-half Marcus Smith and number eight Alex Dombrandt are among four Harlequins players to have been called up to the England squad.
Read more

The United Arab Emirates' non-oil private sector continued its solid growth in August, only marginally below an expansion in July that was the fastest pace in two years, a business survey showed.
Read more

Magawa, who was awarded a gold medal for his heroism, is set to enjoy a happy retirement.
Read more

In a leaky underwater rail tunnel, workers race against...

With a new rail tunnel into New York years away at best, Amtrak is embarking on an aggressive and expensive program to fix a 110-year-old tunnel in the interim
Read more

Bought an Amazon Kindle with a Prime Day deal&quest;...

While Amazon Prime Day will bring discounts on the company's tech, you can already prepare for owning it.
Read more

Just two weeks into her tenure as chair of the U.S. Federal Trade Commission, Lina Khan has been handed her first crisis: how to rescue the agency’s near-dead monopoly lawsuit against Facebook Inc. and keep antitrust enforcement against the biggest technology…
Read more

Basketball legend Charles Barkley says he's been warned about the jokes he has made on-air.During an appearance with Washington, D.C.'s The Fan radio show on Monday, Barkley told hosts Grant Paul...
Read more

Schools close throughout the Florida Panhandle in anticipation of...

With Tropical Storm Fred gaining strength on the way to the Florida Panhandle, many schools in the area are closed Monday to brace for its impact.
Read more

How to Avoid App Store Scams

Apple’s and Google’s approval guidelines are notoriously lax—and they won’t keep out apps that are after your money and data. Here’s how to sniff them out.
Read more

Azroy Dawes-Clarke, from Romford in east London, was an inmate at HMP Elmley.
Read more

A top school is investigating after Fabrice Muamba says his son faced racist abuse in a rugby game.
Read more

Time and environmental factors are complicating the search for...

The search for Brian Laundrie, the fiancé of Gabby Petito, is heading into another week and authorities seem no closer to finding him.
Read more

Afghanistan's government could collapse as quickly as six months after all U.S. troops withdraw from the country, according to new analysis from the U.S. intelligence community.The new assessment, whic...
Read more

Programming note: Money Stuff will be off tomorrow, back on Friday.
Read more

The former Olympic athlete and tv star announced the move on Twitter on Friday.
Read more

Ethnic tensions flare up in Montenegro over church ceremony

"Amid all of this, violence is never far away," Morita told "Face the Nation."
Read more

This $40 portable steamer will change the way you...

After testing a popular, viral travel iron, we realized the greatness of the Reliable Dash portable steamer and iron, which truly lives up to its name.
Read more

Realme GT to have the highest RAM; Realme Book,...

The Realme GT will have 7GB of virtual RAM while the Realme Book Slim’s screen will cover 100% of the sRGB colour gamut.
Read more

Police say the 18-year-old man was hit on Crow Road in Glasgow by a vehicle in the early hours of Saturday.
Read more

Big rise in numbers of migrant children on Mexico-US...

The increase from 380 to nearly 3,500 has overwhelmed local facilities in Mexico, the UN warns.
Read more

‘Science should be at the centre of all policy...

Coronavirus has shown how good science should be embedded in all big decisions, writes Prof Ruth Morgan.
Read more

A man was brutally attacked by a hatchet-wielding maniac at a Chase Bank ATM in Lower Manhattan Sunday evening.
Read more

Cuba says the U.S. embargo is ‘genocidal.’ What does...

The decadeslong U.S. embargo against Cuba makes it harder to export goods to the communist country, even though laws have been adjusted over time.
Read more

The State Of Small Business And A Look At...

Sen. Kyrsten Sinema (D-Ariz.) issued a statement criticizing activists who on Sunday followed her into a bathroom in Arizona insisting she support the De...
Read more

Airbus ramps up production as it eyes post-Covid recovery

The 19-year-old son of a Chicago policeman was shot and killed as he and a friend sat on the front steps of his mother's home. He was hours away from returning to St. John's University in New York. Dean Reynolds has more.
Read more

Ros Atkins explains the link between climate change and recent heat waves in the US and Canada.
Read more

European stocks hit by risk aversion ahead of earnings...

Australian police were told the 2-year-old was twice taken to a children's hospital, in August and September 2020, following suspected poisoning.
Read more

Historians and nautical enthusiasts might want to get saving. LEGO has revealed its largest ever set, of arguably the world's most famous boat, the RMS Titanic.
Read more

England bowler Adil Rashid is the third player to say he heard Michael Vaughan make a racist comment to a group of Asian cricketers.
Read more

Steve Punt and Hugh Dennis present the week via topical stand-up and sketches and they're back in the BBC Radio Theatre in front of a remote audience. Joining them from a safe distance is Felicity Ward who has a fool proof plan for improving food in this cou…
Read more

President Biden is facing criticism over his administration's withdrawal from the two-decade conflict in Afghanistan that could leave a lasting blemish on his presidency.Biden, who ran for president in part on his...
Read more