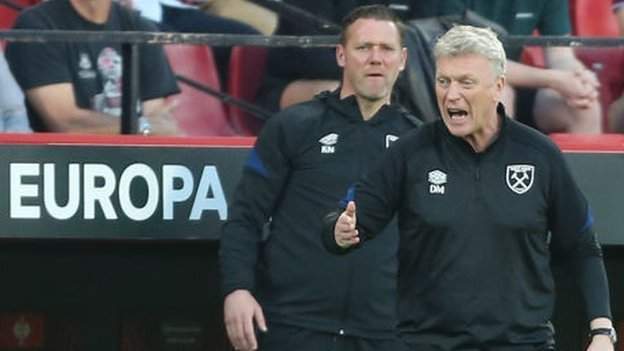 West Ham boss David Moyes is hoping for a memorable night on Thursday as his side aim to overturn a first-leg deficit against Sevilla in the second leg of their Europa League last-16 tie.

“We’re here to win, we want to win and looking forward to it,” said Moyes.

“It can be a great experience we’ll always remember, but what will make us remember it even more is winning.”

The Hammers will be without forward Jarrod Bowen because of a heel injury, while striker Michail Antonio and left-back Aaron Cresswell are doubts after they both did “light training” away from the rest of the team on Wednesday.

West Ham, who have never played in the Champions League and not played in the group phase of the Europa League before this season, are aiming to reach the quarter-finals of a European competition for the first time since they reached the last eight of the Cup Winners’ Cup in 1980-81.

“I see this as an incredible achievement for West Ham to be in this position, from where we’ve been in the past,” added Moyes, whose side are also sixth in the Premier League. “For the cup competitions and the league, we’re in a great position.

“The players are showing great resilience and our character’s been unquestionable.

“We’ve beaten Liverpool, Chelsea and Tottenham at home, so if we can beat those teams, we can give most teams a game.

“We’ve had some fabulous atmospheres in the stadium. I’d expect this to be up there with them.”

Sevilla have won the Europa League four times since 2014 and are currently second in La Liga, 10 points behind leaders Real Madrid, but five points ahead of both Barcelona and reigning Spanish champions Atletico Madrid.

“If you’re second in La Liga, you have to be some side,” added Moyes. “Sevilla are a side experienced in winning this trophy.

“We want to challenge the best and Sevilla are among the best.

“Sevilla would be one of the favourites for the tournament. We didn’t do too badly against them, but we’re going to have to do much better to get through.”

Sevilla will be without three Argentina internationals as winger Lucas Ocampos is suspended, while attacking midfielder Papu Gomez and left-back Marcos Acuna are injured.

Forward Anthony Martial, on loan from Manchester United, and former Manchester City player Jesus Navas are both in the squad.

The winners of the Europa League qualify for next season’s Champions League, although West Ham would get there anyway via their league position if they finish in the top four in England. NATO to Boost Troop Levels in Biggest Overhaul Since...

Celebrating 361 Members of our Disney ‘Ohana

Cameron Diaz coming out of retirement to star alongside...

US orders evacuation of most embassy staff in Ukraine...

Medication abortions: Next battleground in the fight over abortion...

Somali forces end hotel attack in which 20 were...

Why One CIO Is Waiting for ‘a Solid Panic’...

Another journalist slain in Mexico — the 4th this...

Sen. Graham calls on Republicans to have an ‘American...

Ayman al-Zawahiri: How US strike could kill al-Qaeda leader...

Gregory McMichael to plead not guilty to hate crime...

Liverpool: Have Reds struck blow over Manchester City after...

Figureskating-Japan team hope to get medals in Beijing despite...

Sisters Bashed for Expecting Man To Give Them Inheritance...

Prince William, Kate relocating to Windsor cottage near the...

Trump signals Pence not likely to be his 2024 running mate if...