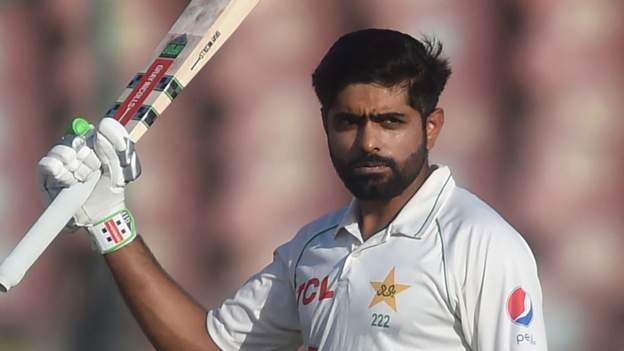 Babar’s 196 was his career-best score in Tests

Babar Azam’s majestic 196 helped Pakistan bat for almost two days in Karachi to rescue an unlikely draw against Australia in the second Test.

Babar fell with 12 overs to go and Faheem Ashraf departed for a duck one ball later to set up a tense finish.

But Rizwan saw off 46 balls with number nine Nauman Ali to complete the escape.

It means the series remains tied at 0-0 going into the final Test in Lahore, which starts on Monday.

Rizwan, who batted for 177 balls and reached his century in the penultimate over, was dropped at extra cover by Usman Khawaja off leg-spinner Mitchell Swepson with 3.1 overs to go.

In total Babar batted for 603 minutes, making his knock the second longest in the fourth innings of a Test after former England captain Michael Atherton’s famous 185 not out against South Africa in 1995, which lasted 643 minutes.

The only occasion a side has survived more overs to save a Test was England against South Africa in a timeless Test in 1939.

Khawaja, playing in the country of his birth, scored 160 in the first innings but Australia chose not to ask Pakistan to follow-on after dismissing them for 148.

Brig. Gen. Blaine Holt explains what America can do...

Harris to travel to Selma for ‘Bloody Sunday’ anniversary

Escaped murder suspect may be ‘extremely violent’ without medication:...

Canada PM: military response not in cards for COVID...

Romney on Capitol attack anniversary: ‘Ignore the lessons of...

Jonny Pelham: The comedian telling jokes about his childhood...

Rangers ‘having talks’ over moving games for Europa semi...

Welcome to the Adams administration

The Linda Lindas Are Growing Up And Making A...

China plays for influence in South Pacific with security...

Colorado governor calls for ‘civility and respect’ as blue...

How Many Episodes of ‘Somebody Somewhere’? HBO Releases Schedule...

EXPLAINER: Verdict for American at Nissan in Ghosn scandal

CEO with Down syndrome runs successful cookie company and...

John Dickerson on Zelensky’s leadership, and on making courage...

EXPLAINER: ESG investing and the debate surrounding it

Jet Airways Coming Back With Premium and No Frills...

2 years of COVID-19: Origins, variants, and the future