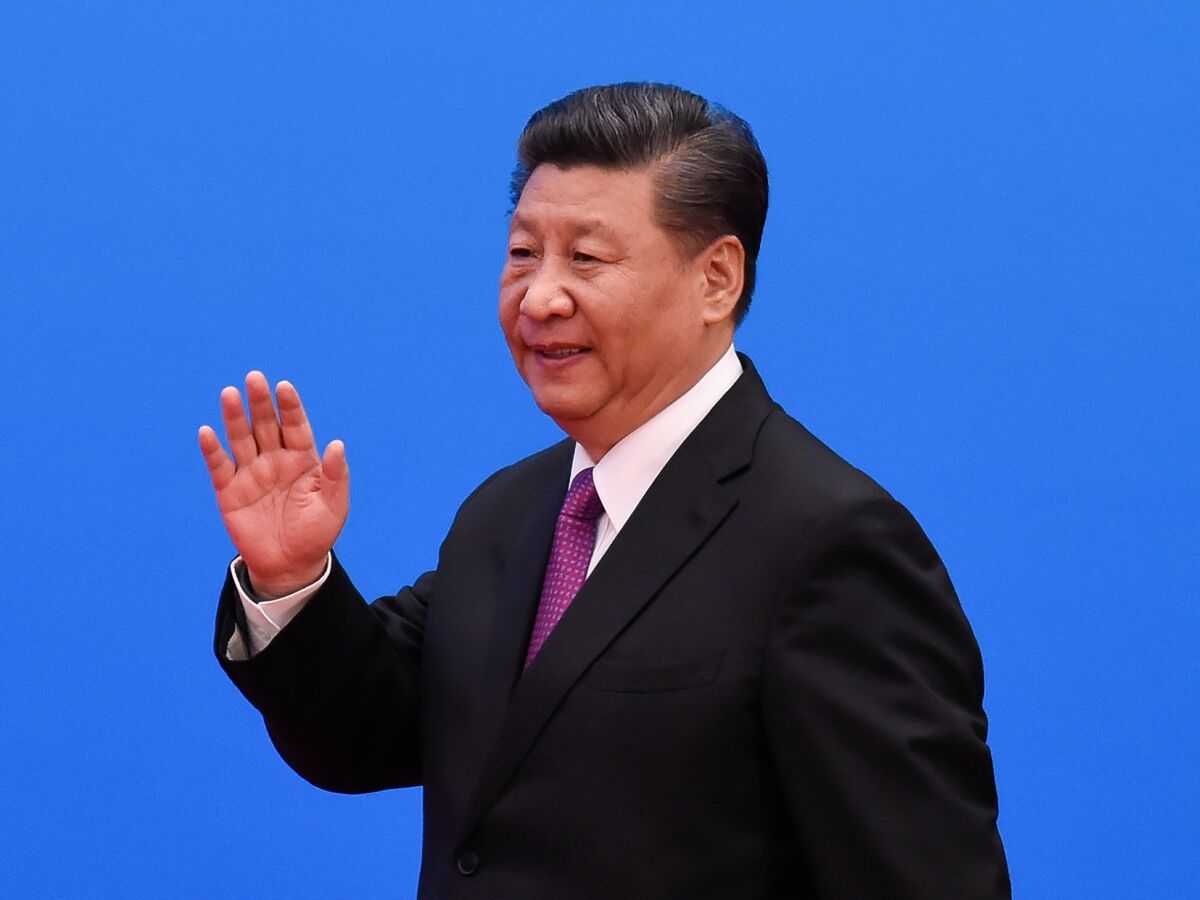 Chinas top leader warned that Beijing will go after so-called

platform companies that have amassed data and market power, a sign that the months-long crackdown on the countrys internet sector is only just beginning.

President Xi Jinping on Monday chaired a meeting of the communist partys top financial advisory and coordination committee, ordering regulators to step up oversight of internet companies, crack down on monopolies, promote fair competition and prevent the disorderly expansion of capital,

The unusually strongly worded comments from Xi and his lieutenants suggest Beijing is preparing to amplify a campaign to curb the influence of its largest and most powerful private corporations, which has so far centered mainly on Jack Mas

Alibaba Group Holding Ltd. and its affiliate Ant Group Co. The term platform economies could apply to a plethora of mobile and internet giants that offer services to hundreds of millions, from ride-hailing behemoth Didi Chuxing to food delivery giant Meituan and e-commerce leaders like JD.com Inc. and Pinduoduo Inc.

Some platform companies are developing in non-standardized ways and that presents risks, CCTV said, citing minutes of the meeting. It is necessary to accelerate the improvement of laws governing platform economies in order to fill in gaps and loopholes in a timely fashion.

next target for increased supervision, according to people with knowledge of their thinking. Like Ant, Tencent will probably be required to establish a financial holding company to include its banking, insurance and payments services, said one of the people, seeking anonymity as the discussions are private.

The two firms will set a precedent for other fintech players on complying with tougher regulations, the people added. Such a move would mark a significant escalation in Chinas campaign to curb the influence of its technology moguls, which began last year with the scuttling of Ants $35 billion initial public offering and the publication of new antitrust regulations governing technology firms.

Tencent lost more than $65 billion of value in the two days following the report, though its shares were up more than 1% on Tuesday.

The semi-regular meeting of the Partys top financial supervisory group typically helps to set the tone and direction of national policy. During their last gathering in September, Xi focused on the so-called dual circulation approach of relying on both international and domestic consumption and production to lift the economy. It took Oklahoma quarterback Spencer Rattler's best performance of the season, a big game on the ground from Kennedy Brooks and some big plays on defense for the sixth-ranked Sooners to finally beat Kansas State.
Read more

Doja Cat Is Blasting Off As Host Of The...

Doja Cat is your 2021 VMAs host. Get ready for the show, set to air live on September 12 at 8 p.m. ET/PT from Barclays Center in Brooklyn.
Read more

We’re certainly keeping our fingers crossed that there’s a third horse in the GPU race by the end of the year.
Read more

The Pentagon has added three more U.S. military bases to the list of installations that will help temporarily house Afghan evacuees who make it stateside, press secretary John Kirby confirmed Friday.“Today the Department of Defense can announce that...
Read more

The Conwy vessel Nicola Faith is found, more than two months after sinking with three crew on board.
Read more

A federal judge on Friday issued a standing order in prosecutions against Capitol rioters that will allow media organizations to obtain prosecutors' video evidence.The ruling from District Court Judge Beryl Howell will implement a process for...
Read more

Some of the best tweets from the weekend's football, including Harry Kane inviting two Spurs fans who had travelled from Dallas to be his guest.
Read more

Nigerian basketball: From beating USA to begging for Olympic...

Nigeria's Olympic basketball team is set to go from wins over the USA and Argentina to arriving in Tokyo without kit.
Read more

China administered about 14.9 million doses of COVID-19 vaccines on Aug. 23, bringing the total number of doses administered to 1.962 billion, data from the National Health Commission showed on Tuesday.
Read more

The Allianz Premier 15s announces its fixtures for the 2021-22 campaign including an entirely new competition.
Read more

Thune: ‘There are Republicans who would vote’ for smaller...

Sen. John Thune (R-S.D.) predicted on Sunday that some Republicans could get behind a smaller infrastructure package but noted that President Biden's $2 trillion plan was largely unrelated to infrastructure.During...
Read more

China on Wednesday blamed Taiwan for escalating tensions, saying the island's actions led Beijing to send in dozens of aircraft into its air defense identification zone the day before. Ma Xiaoguang, a...
Read more

Joe and Jill Biden's visit with the Queen capped what the British government will surely view as the Bidens' hugely successful visit to Britain for the G7 Summit, one which featured a full dose of the royal family's soft power and went more smoothly than the …
Read more

China stocks see biggest slump in US since 2008...

The value of New York-listed Chinese companies has plummeted after a series of crackdowns by Beijing.
Read more

20 years in Afghanistan: Was it worth it?

The BBC's Frank Gardner asks the awkward question about a war with an astronomical human cost.
Read more

Italy is honoring Dante Alighieri in myriad ways on the 700th anniversary of the great poet's death, from musical scores to museum exhibits
Read more

Samsung Galaxy Tab S8: what we want to see

The Samsung Galaxy Tab S8 could be a real alternative to the best iPads with these changes.
Read more

CBSN correspondent Carter Evans joins CBSN from Sarasota, Florida. He says power outages continue, with hurricane-force gusts. Many homes have been boarded up bracing for the storm.
Read more

Microsoft warns users to update PowerShell ‘as soon as...

A critical vulnerability in a .NET package could be exploited to launch RCE attacks.
Read more

Math and reading test scores for the nation's 13-year-old students fell between 2012 and 2020 for the first time in the nearly 50-year history of the National Assessment of Educational Progress (NAEP) long-term trend (LTT) assessment, according to results rel…
Read more

Want all the best AirPods Cyber Monday deals we've spotted? We're here for you - and some surprising alternatives to cover
Read more

Cuomo accuser meets with investigators, says he spoke of...

Avanti West Coast is advising passengers not travel to or from Glasgow Central, Edinburgh, Motherwell or Lockerbie.
Read more

20 years ago, economist Jim O'Neill coined the 'BRICs' acronym as Brazil, Russia, India and China rose in political and economic stature. Here's what he thinks about the idea now in light of their mixed fortunes.
Read more

Nokia Oyj plans to cut up to 10,000 jobs in the coming years as the telecommunications equipment maker looks for new ways to save money and stay competitive with rival Ericsson AB.
Read more

More than 79 members of the Afghan women’s soccer team have arrived in Pakistan with their families, leaving Afghanistan as the Taliban begins to plan how it will govern the country following the U.S.’s troop withdrawal.
Read more

What should you do with your tax refund check?

The average tax refund in the United States is about $2,700. But you might want to think twice before rushing out to spend it right away.
Read more

The head of the WTA says he has a "hard time believing" email attributed to Peng Shuai is from her.
Read more

Covid: Decision to jab children ‘entirely up to parents’

Taiwan reported another rise in domestic COVID-19 cases on Saturday, but the health minister said the trend remained stable with new infections concentrated in the northern part of the island in and around Taipei.
Read more

Police send a report on alleged racial abuse and assault at Rangers' Europa League tie against Slavia Prague on 18 March to the procurator fiscal.
Read more

The Impact of The Price Drop in Cocoa

Google may cut pay of staff who work from...

Oxygen in short supply in Afghanistan as country battles...

Oxygen is in short supply in Afghanistan as the country is battling a third wave of COVID-19 cases and its hospitals are being overrun.
Read more

Injured veteran up for ‘inspirational’ award after cycling 60...

Cowboys and Dak Prescott have finally agreed on the richest contract in club history two years after negotiations first started with the star quarterback.
Read more

Orthodox Church’s top patriarch to visit US, meet with...

Walmart will no longer require customers to wear masks

Walmart will no longer require customers and stores associates to wear face masks inside of its stores if they are fully vaccinated.The retail giant sent a memo to employees on Friday, announcing the customers can shop without a mask effectively...
Read more

The 5cl Springbank single malt was part of a collection of more than 400 bottles put up for sale.
Read more

A woman who allegedly stormed the Capitol on Jan. 6 is facing possible jail time as a judge is asking her to explain a possible violation of an order to wear a mask while she awaits trial.U.S. District Court Judge Royce Lamberth in a ruling Friday...
Read more

Alabama judge accused of inappropriate comments, behavior to be...

An Alabama judge accused of inappropriate behavior and making insensitive comments has been removed from the bench.In a ruling publ...
Read more

Rangers end the Scottish Premiership season unbeaten with a comfortable win over Aberdeen as they officially lift the Scottish title for the 55th time.
Read more

Covid in Scotland: Bothies open for ‘responsible use’

The shelters in Scotland have reopened following a further relaxation of Covid restrictions.
Read more

Florida Gov. Ron DeSantis is proposing pay increases for law enforcement officers statewide and bonuses for first responders as he ramps up efforts to recruit dissatisfied police officers from other states.
Read more

Thoma Bravo is buying Proofpoint in a $12.3 billion...

Proofpoint is being acquired by Thoma Bravo after generating over $1bn in annual revenue last year.
Read more

Crypto Could Yet Wreck the Financial System

There aren’t any existential threats yet, but regulators can’t sleep on future risks.
Read more

The government mulls how to deal with a lack of drivers amid warnings of food supply problems.
Read more

Anti-military protests in Myanmar on anniversary of 1988 uprising...

Protests against Myanmar's military government broke out across the nation on Sunday, the anniversary of the bloody suppression of a 1988 uprising against a previous army junta.
Read more

It has been five years since a deadly mass shooting at the Pulse nightclub in Orlando, Florida. On June 12, 2016, a gunman entered the LGBTQ+ nightclub and opened fire. The shooter killed 49 people and wounded dozens more in the second deadliest shooting in U…
Read more

Nintendo Switch 2 could release before March 2022, according to new report