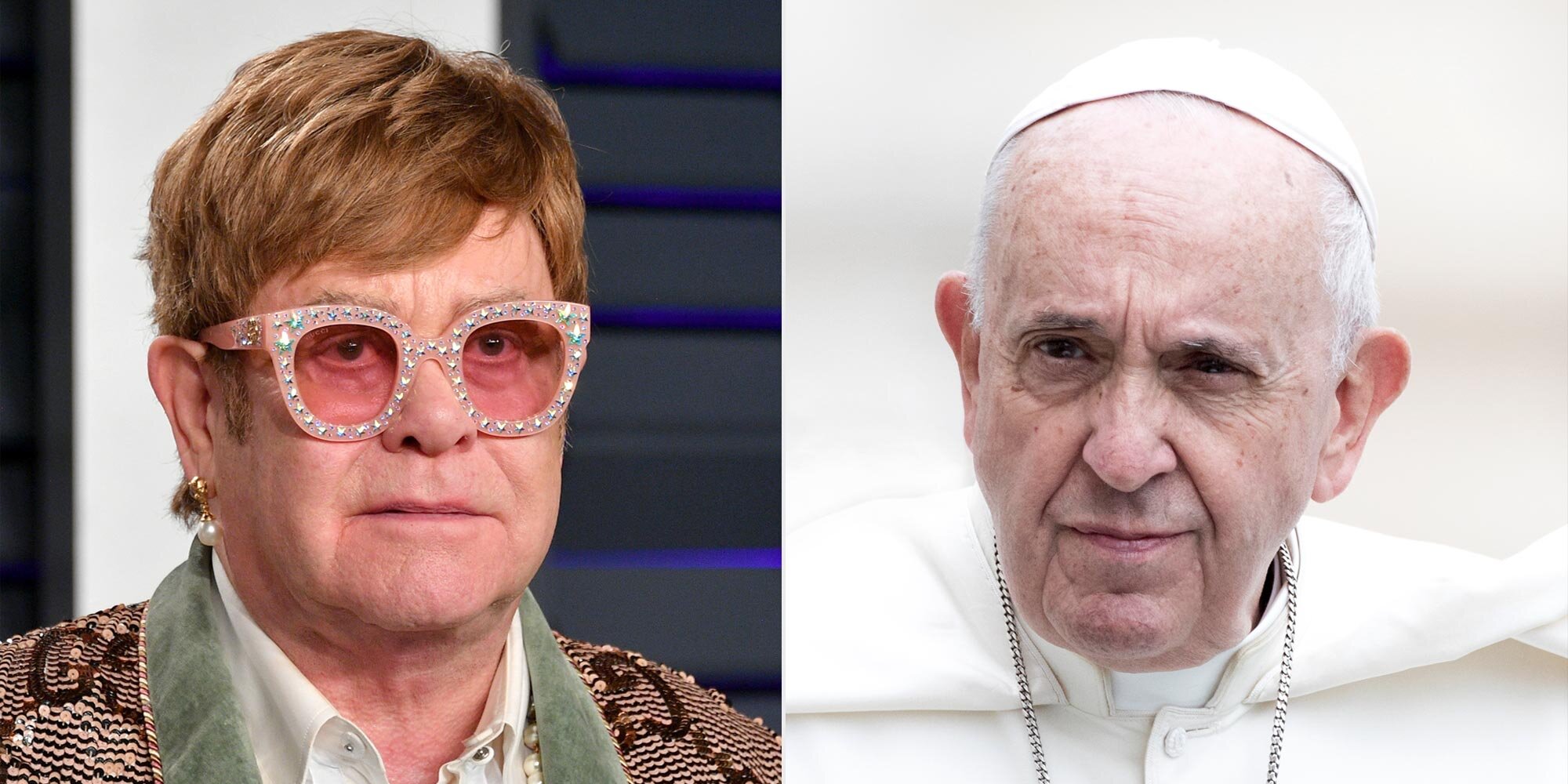 Elton John is singing a song of outrage over the Vatican’s controversial stance on gay marriage.

The legendary musician slammed the church’s recently announced position on LGBT unions, tweeting Monday about the “hypocrisy” of the religious organization after it reportedly invested over $1 million in John’s flamboyantly costumed, queer-themed 2019 biopic Rocketman, which he executive produced alongside his husband, David Furnish.

“How can the Vatican refuse to bless gay marriages because they ‘are sin,’ yet happily make a profit from investing millions in Rocketman – a film which celebrates my finding happiness from my marriage to David??” John tweeted, referencing the Taron Egerton-starring film’s plot following his decades-long relationship with Furnish — and its inclusion of a gay male sex scene.

According to Newsweek and The Daily Beast investigations, the Vatican reportedly invested large sums of money into the production, with the former citing $1.2 million going towards financing Rocketman ahead of its release, though representatives for John, Pope Francis, and distributor Paramount didn’t immediately respond to EW’s request for confirmation on the singer’s statements.

The 73-year-old’s statement comes after the Vatican’s official Congregation for the Doctrine of the Faith announced Monday that its priests couldn’t bless same-sex unions because they’re “not licit,” but that the church should still be welcoming to gay people “with respect and sensitivity” despite not endorsing their partnerships.

Though Rocketman was celebrated in most parts of the world — winning John and longtime collaborator Bernie Taupin an Oscar for Best Original Song atop grossing $195 million globally — its gay content also generated controversy in Russia and Samoa.

Samoa’s principal censor Leiataua Niuapu Faaui made the decision on the basis of the film’s themes clashing with the country’s “culture and our Christian beliefs,” while the film reportedly screened in Russia with its gay romance scenes heavily edited.

“We reject in the strongest possible terms the decision to pander to local laws and censor Rocketman for the Russian market, a move we were unaware of until today,” John and the filmmakers said in a joint statement at the time. “Paramount Pictures have been brave and bold partners in allowing us to create a film which is a true representation of Elton’s extraordinary life, warts and all. That the local distributor has edited out certain scenes, denying the audience the opportunity to see the film as it was intended is a sad reflection of the divided world we still live in and how it can still be so cruelly unaccepting of the love between two people.”

Check out EW’s The Awardist, featuring exclusive interviews, analysis, and our podcast diving into all the highlights from the year’s best films.

German CDU Leaders Back Laschet as Candidate to Succeed...

President Joe Biden will mark the first anniversary of the January 6, 2021, insurrection by delivering remarks on Thursday morning focused on the "singular responsibility" former President Donald Trump had in the assault on the Capitol, the White House says.
Read more

Police in Paris on Saturday fired tear gas and aimed water cannons at protesters defying a ban on marching against Israeli attacks on Gaza, trying to disperse demonstrators gathering in groups of several hundred.
Read more

Nursing school applicants have not let the pandemic dissuade them from pursuing their dreams.
Read more

There’s so much to know about the guy who...

People are realizing that the comedian, who went viral for finding shrimp tails in his cereal, is married to 'Boy Meets World' star Danielle Fishel.
Read more

Specs for the OnePlus 10 Pro have leaked almost in full, and it seems like the phone could be too similar to the 9 Pro.
Read more

The Allahabad high court reduced the jail term of the convict from 10 years to seven years.
Read more

Liverpool great Steven Gerrard is the seventh former player to be inducted into the Premier League Hall of Fame.
Read more

Ashleigh Barty says winning her first Wimbledon is "better than I ever imagined" after beating Karolina Pliskova 6-3, 6-7, 6-3 to become the first Australian women's champion for 41 years.
Read more

Former FBI Director James Comey told the Senate Intelligence Committee that if FBI agents heard the President say "I hope you'll let this go" about the Michael Flynn investigation, there could be a real "chilling effect" on their work. Watch his comments here.
Read more

Tool created to aid cleanup from Microsoft hack in...

A tool designed to help businesses protect themselves from further compromises after a global hack of Microsoft email server software has been downloaded more than 25,000 times since it was released last week
Read more

Open: This is Face the Nation, March 26

Why Inflationary Fears May Not Outlast the Pandemic (Podcast)

London Mayor Sadiq Khan has declared a “major incident” due to a rapid spread of the omicron variant across the U.K. capital, according to a statement.
Read more

How enterprises can navigate the edge ecosystem

How to navigate the edge ecosystem and leverage the global network available.
Read more

WhatsApp is relaxing its privacy stance and will share data with Facebook in order to create targeted advertisements. CNET associate editor Dan Graziano joins CBSN with the latest.
Read more

A union calls a return to normal hours a health risk, but the government says it takes safety seriously.
Read more

New Covid battle for DeSantis: Cracking down on cities...

“I’m not going to take actions that would adversely impact the safety of our community,” said Orange County Mayor Jerry Demings, a Democrat.
Read more

Operators of the cable car near Lake Maggiore said maintenance and checks were carried out regularly.
Read more

A shortage of personnel and basic materials are the main constraints to the pace of the energy transition for top power suppliers such as Europe's largest utility Enel (ENEI.MI), the company's Chief Executive Francesco Starace told Reuters.
Read more

Why clear action now in response to Hong Kong...

It is imperative that the West take immediate action in response to the CCP's takeover of Hong Kong to stem the advancement of this authoritarian power. CCP leadership is watching closely.
Read more

British Home Secretary Priti Patel said on Sunday that she is considering police protection for MPs when meeting with the constituents, following the fatal stabbing of British MP David Amess.Speaking to ...
Read more

Your Evening Briefing: Formal Hearings Over the Jan. 6...

With Sarah Ferris and Andrew Desiderio. THIRD TIMES (DEFINITELY NOT) THE CHARM Senate Democrats expect to be thwarted again this afternoon when the chamber...
Read more

A lack of spark and too predictable? Spain are under pressure after another disappointing result as Robert Lewandowski ignites Poland's hopes
Read more

Reps. Wittman, Stefanik: The world deserves to know the...

The U.S. intelligence community has completed its investigation into the origins of COVID-19. As feared, its findings were inconclusive.
Read more

Democrats are looking to flip the script by going on offense against Senate Republicans’ refusal to raise the debt ceiling. The party’s latest pre-midterms strategy mirrors the GOP game plan of tying vulnerable Democratic incumbents to...
Read more

Britain's Katie Archibald doesn't need to get pumped up for the Track Cycling World Championships after the Olympics - just don't try to ask her something when her headphones are on.
Read more

Navient to Pay $1.85 Billion in Settlement Over Predatory...

According to the survey, the number of "never-vaxxers" appears to have declined throughout the month since states began incentivizing vaccinations with cash prizes and other rewards.
Read more

Fully vaccinated veteran hospitalized after being diagnosed with Delta...

A 73-year-old veteran in Pennsylvania, who is fully vaccinated, is currently hospitalized after being diagnosed with the COVID-19 Delta variant, a report said.
Read more

A cliff wall broke away at a national park along Lake Superior in northern Michigan, stunning some boaters who captured it on video
Read more

Trump lashes out at prosecutors over criminal probe into...

Former President Trump on Tuesday lashed out at state and local prosecutors in New York after they announced that the two offices were conducting a joint criminal investigation into his company.In a lengthy stateme...
Read more

The two prison workers fabricated log entries to make it seem like they checked on Epstein.
Read more

A U.S.-owned oil refinery on the island of St. Croix announced Monday that it will remain shut down "indefinitely" after the Environmental Protection Agency ordered it to halt operations in May.In a ...
Read more

Paul Myners, the City of London grandee who helped oversee Gordon Brown’s response to the financial crisis, has died. He was 73.
Read more

The New York Police Department (NYPD) is telling unvaccinated officers that they must wear masks at all times while on duty."As per Mayoral Executive Order 74, members of the service...
Read more

China's military said on Monday it had carried out beach landing and assault drills in the province directly across the sea from Taiwan, though it did not link the exercises to current tensions with Taipei.
Read more

Ubisoft has revealed that Rainbow Six: Quarantine has been renamed ahead of E3 2021.
Read more

Twenty-five years ago, cast members at Disney’s Contemporary Resort carefully packed a time capsule with documents, nametags and other treasures to celebrate the anniversary of the Resort’s dedication. The engineering services team sealed and buried it in the…
Read more

This week's Sunday talk shows are expected to be dominated by Georgia's controversial voting law and lawmakers' push to tackle gun violence and the surge of migrants at the U.S. border. ...
Read more

Reality TV stars Chip and Joanna Gaines to use...

Reality TV stars Chip and Joanna Gaines are planning to use a newspaper building to house their lifestyle brand headquarters, ...
Read more

Weekly Watchlist: The Worst of the Pandemic Could Still...

Snail Mail, the musical alias of singer-songwriter Lindsey Jordan, shot to fame in 2018, but the effects took a toll on Jordan. After a few years sorting it out and re-examining her love life through that lens, she's back with a great new album called 'Valent…
Read more

A college student who posted online that “infamy is just as good as fame" after she climbed through a broken window at the U.S. Capitol on Jan. 6 has been sentenced to a month behind bars for her actions
Read more

QAnon fanatics are rebranding their ‘secret war.’ And it’s...

Cloudflare is about to make millions of web pages...

The air ambulance was deployed, with three of those hurt being treated as "priority" cases.
Read more

Israeli forces clashed with Palestinians in the West Bank on Saturday as violence rises in the area and near east Jerusalem.The fighting began late on Saturday near Homesh, ...
Read more

How 60 Minutes reported its diving story “King of...

It may be miniaturized, but the Devialet Phantom Reactor still packs a punch.
Read more

This seriously underrated Microsoft Teams feature is getting an...

Microsoft is working on a Teams update that will make addressing specific groups of colleagues much easier.
Read more