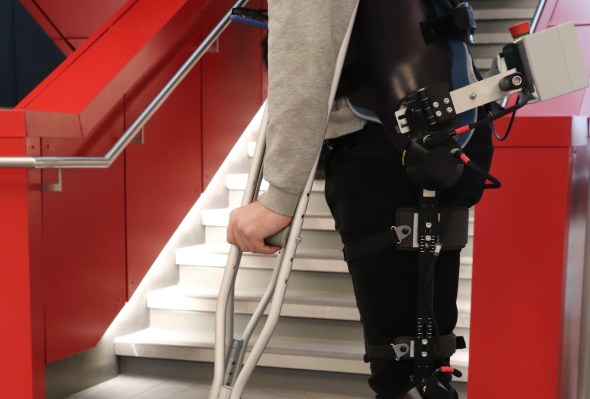 Researchers at Canadas University of Waterloo are showcasing work with prosthesis and exoskeletons that utilizes cameras and AI to deliver more natural human movement. The ExoNet project leverages video captured by wearable camera, run through deep learning AI, in order to mimic how humans adapt and adjust movements based on their environment.

The project is an attempt to create more natural locomotion on the fly than is currently offered through systems with connected smartphone apps or other external controllers.

“That can be inconvenient and cognitively demanding,” Waterloo PhD candidate Brokoslaw Laschowski said in a release tied to the research. “Every time you want to perform a new locomotor activity, you have to stop, take out your smartphone and select the desired mode.”

The research highlighted primarily focuses on robotic exoskeletons, which are being developed by a number of different companies to help assist people with impaired mobility. The hope here is that the ExoNet system could eventually replace the need for external control by the wearer, in order to create more natural locomotion.

Of course, theres still a lot of work to be done. Naturally, the system is easier to navigate on flat terrain. Next steps would involve adapting it to environments that can give those with limited mobility some difficult, including stairs and other obstacles. A final version of the system would be able to anticipate and adapt accordingly.

Our control approach wouldnt necessarily require human thought, Laschowski adds. Similar to autonomous cars that drive themselves, were designing autonomous exoskeletons that walk for themselves.

There are other challenges here, as well. Batteries are an issue, for one. The team is looking to improve longevity by experimenting with a system that can recharge with the wearers movement. UK cracks down on travel as omicron concerns rise

North Carolina primary field builds, with or without Lara...

The former president's daughter-in-law froze the Senate race for months, but now Republicans are jumping in.
Read more

The youngest attacker who took part in a botched carjacking that left an Uber Eats driver dead in Washington D.C., pleaded guilty Thursday to a murder charge.
Read more

Shares of Chinese technology companies slid in Hong Kong as investors stepped back to gauge the impact from Beijing’s move to block ride-hailing giant Didi Chuxing from app stores due to data security issues.
Read more

Paul Pogba becomes the latest Euro 2020 star to go viral for removing a bottle - in his case of Heineken - from a news conference.
Read more

Figures compiled by Britain’s Press Association show that at least 430 migrants made the perilous journey across the English Channel to the U.K. on Monday, a new record for a single day
Read more

Hackers accessed the FBI’s email system and sent spam to 100,000 accounts on Saturday, according to the Spamhaus Project, an email spam watchdog group.The organization posted an example on Twitter of one of the emails that were sent to thousands of&...
Read more

The hacker behind the $600m Poly Network cryptocurrency heist has posted a Q&A on the blockchain.
Read more

Antivirus software pioneer John McAfee was found dead in a jail cell in Spain in what has been ruled a suicide. As CBS News' Imtiaz Tyab reports, McAfee had a complicated life and death - but his legacy will live on.
Read more

The exhibition includes a waxwork of Jesy Nelson, who left the group in December.
Read more

The agreement is aimed at keeping alive the overarching goal of limiting warming to 1.5 degrees Celsius.
Read more

Drugs like opium, meth and hashish remain the Taliban's largest single source of income and have a "destabilizing and corrupting effect" in Afghanistan, U.N. officials tell CBS News.
Read more

Tweaked COVID vaccines in testing aim to fend off...

How Accessibility at the Summer’s Gaming Events Stack Up

While a number of recent announcements highlighted accessibility in games, or offered great options for viewers, there's more work to be done.
Read more

Will you benefit from prepaying property taxes?

CBS News business analyst Jill Schlesinger joins "CBS This Morning" to discuss whether it makes sense to prepay your property taxes ahead of 2018, and how to take advantage of the stock market in the new year.
Read more

A suspect in a Miami banquet hall shooting in May that killed three people and injured 20 was arrested late Thursday, while two other men believed to have been involved in the attack remain at large.Th...
Read more

Dubai’s Expo 2020 has acknowledged that five workers had been killed on site during construction of the massive world’s fair, revealing for the first time overall statistics for worker fatalities
Read more

Four people were shot, one fatally, at Lake Merritt in Oakland, California Saturday, police said. No suspects were in custody.
Read more

Omar slams Biden admin for continuing ‘the construction of...

Rep. Ilhan Omar (D-Minn.) criticized the Biden administration for the continued construction of the former administration's wall along the U.S.-Mexico border, which she called "xenophobic and r...
Read more

Brazilian scientists have discovered that a native viper's venom can be used as a drug to help combat COVID-19, ...
Read more

UK stars call on government to act over post-Brexit...

Artists such as Radiohead and Biffy Clyro back a campaign asking for a financial support package.
Read more

MSNBC anchor Geoff Bennett praised Texas Democrats on Monday who fled the state to prevent a vote on an election reform bill and said national Democrats could learn from them.
Read more

On Oct. 1, two new nighttime spectaculars – “Harmonious” and “Disney Enchantment” – will debut to help kick off our 50th anniversary festivities during “The World’s Most Magical Celebration” at Walt Disney World Resort. And as a special early 50th surprise, w…
Read more

From next year, all musicians will compete for a combined best artist prize, organisers announce.
Read more

One of the pressing questions that was asked at the White House briefing on Thursday was an “update” on whether or not a cat would be joining the Biden family.
Read more

A jury in Arizona has convicted a U.S. Air Force airman in the murder of a Mennonite woman who was living in New Mexico
Read more

How we feel touch and temperature wins Nobel Prize

Turpin daughters to speak on abuses for first time

Two of the Turpin children, who were imprisoned and tortured by their parents for years, will be speaking out on their experiences for the first time in an ...
Read more

Aaron Ramsey scored the first goal to give Wales a 2-0 victory over Turkey at the European Championship.
Read more

President Joe Biden said the U.S. economy is recovering from the pandemic faster and stronger than expected, after a report showing the labor market got back on track last month with broad-based payroll gains.
Read more

US woman in Bali ‘suitcase murder’ freed from jail

COVID’s US toll projected to drop sharply by the...

Teams of experts are projecting that COVID-19′s toll on the U.S. will wane dramatically by the end of July
Read more

The U.S. Department of Agriculture has declined a request by the pork industry to increase the speed at which pigs can be processed into meat
Read more

Sydney McLaughlin is the future of athletics. That's what they say. And the numbers agree.
Read more

Black Americans are going to be victims of the border crisis because Democrats would "flood" illegal immigrants into the U.S. and reduce the power of voters, Candace Owens said Monday.
Read more

Watch out – that SMS message could steal all...

Scam text messages have seen a major rise during the pandemic, Which? finds.
Read more

Representative Ro Khanna of California said he disagrees with a number of industry analysts and economists who have said the idea could backfire.
Read more

The Food and Drug Administration on Tuesday announced that it had authorized an additional batch of Johnson & Johnson COVID-19 vaccine that had been produced from a troubled Baltimore facility.
Read more

Kosovars get COVID vaccine after Friday prayer at mosques

President Biden will likely deliver a joint address to Congress after he has a chance to take a victory lap on a soon-to-be-passed coronavirus relief package, White House chief of staff Ron Klain said Tuesday."I th...
Read more

Britain’s Raducanu to headline Court One

Tencent Holdings Ltd. shares fell a second day on concern regulators are now turning their sights to Pony Ma’s business empire, fueling a $62 billion wipe-out that one brokerage says obliterated most of the value of its online finance business.
Read more

Homeless man could face 7 years in prison for...

A homeless man is facing the possibility of seven years in prison after shortchanging a Pennsylvania convenience store 43 cents for a bottle of Mountain Dew.Joseph Sobolewski, 38, st...
Read more

California to remove mask mandates as it prepares to...

A new CBS News poll finds that 29% of adults surveyed will not get vaccinated or are still deciding. Concern is now looming about the Delta variant of COVID-19 becoming the dominant strain of the virus in the U.S. Lilia Luciano has the latest.
Read more

Cuomo: Congress must include SALT cap repeal in future...

New York Gov. Andrew Cuomo (D) on Monday urged Congress to include repeal of the state and local tax (SALT) deduction cap in future legislation, as House Democrats from the state are pushing to include such a repeal in an...
Read more

He won the Conspicuous Gallantry Cross for his bravery in storming an enemy gun position in Iraq.
Read more

Property: ‘Crazy’ house prices too much for locals in...

Kobe Bryant’s eldest daughter, Natalia Bryant, made her foray into modeling in a huge way after signing with IMG Models back in February.
Read more

Dozens of homes in the coastal city of Atami were buried as heavy rain triggered a torrent of mud.
Read more

The cost of gasoline is up nearly 50% from a year ago, the latest Consumer Price Index showed.
Read more

The former foreign secretary says it takes a lot of work to influence US governments from outside.
Read more

EXCLUSIVE: Former President Trump slammed President Biden’s spending agenda as the “Green New Deal bill,” warning that, if passed, the American people will face tax increases, and the Democratic Party will lose dozens of seats in the House of Representatives …
Read more

President Joe Biden condemned the recent spate of antisemitic attacks across the U.S. amid the conflict between Israel and Hamas.
Read more

Heads of state from the continent have praised the late president at his state funeral in Dodoma.
Read more

Though the death rate has slowed dramatically as more become vaccinated, the U.S. is nearing 600,000 deaths from the coronavirus. Carter Evans reports.
Read more

Facebook to label all posts that discuss coronavirus vaccines