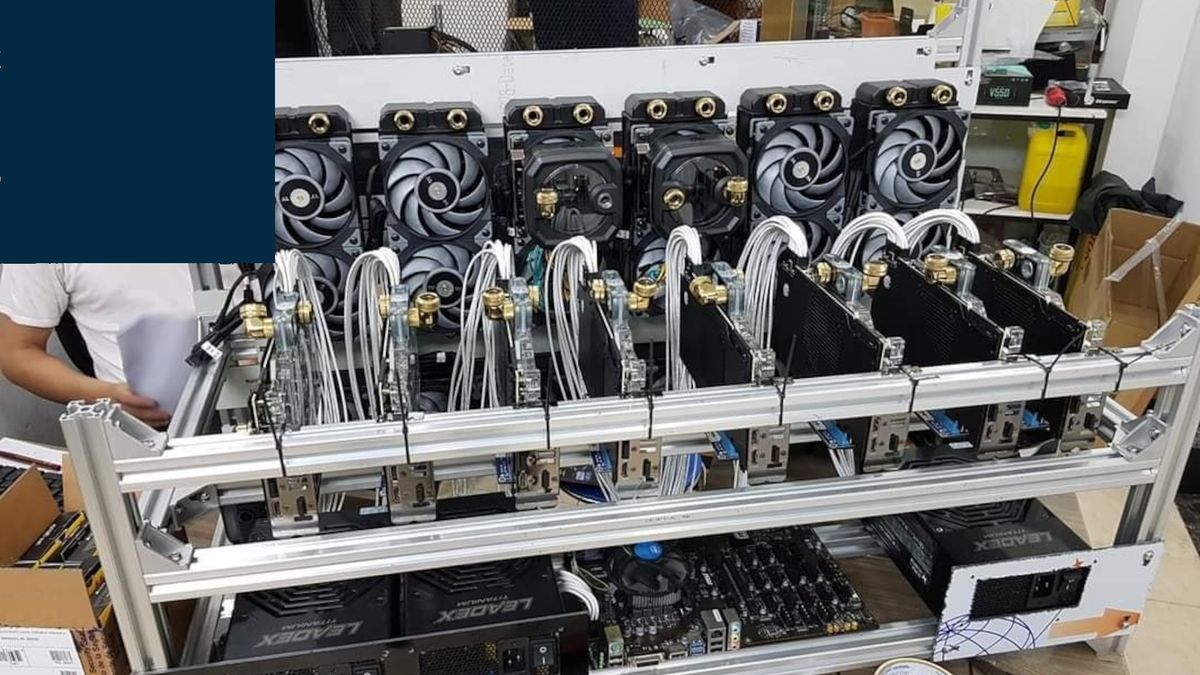 The GeForce RTX 3090 is currently one of the most expensive graphics cards on the market, but that hasn’t stopped cryptominers from snapping up available stock and contributing to the ongoing GPU shortage. With the recent boom in Ethereum prices, cryptocurrency mining has exploded in popularity over the last few months resulting in some ludicrous builds.

The most recent of these attention-grabbing rigs was created by a group of Vietnamese cryptocurrency miners, who are clearly not content with using stock cooling fans or even water coolers, instead opting to submerge eight RTX 3090 GPUs in a tank of mineral oil.

This particular build was spotted by @I_Leak_VN , who posted a video of it in action to Twitter. It’s hard to decipher the specifics of what temperature or voltage is being used due to the fuzzy quality of the video, but it seems to be operating and running some GPU tuning software.

Mineral oil cooling does have certain advantages over water or air cooling, in that you can ensure all components are cooled to the same consistency, but this doesn’t make a submerged system the best option. We can’t imagine the group who created this build will be happy to clean off every component to resell, which could leave them in a sticky (or greasy?) situation when the current cryptocurrency rush falls off a cliff.

The process to create such a rig is extremely time-consuming and certainly not the nicest thing to look at, but mineral oil has been shown to potentially give your PC components some longevity an important factor for miners who are trying to make the most out of their investment, especially as undervolting is already an established technique used when mining cryptocurrency to keep parts like GPUs running for longer. LinusTechTips actually has a video series running through how you could cool your PC using this method if you choose.

If you’ve attempted to buy graphics cards like the new Nvidia RTX 3080 or AMD Radeon RX 6800 XT since they released in late 2020, then you’ve likely been unsuccessful. While the stock shortage is due to a combination of factors, such as slow production, automated bots and scalpers, many gamers looking to get their hands on the latest GPUs are especially not taking kindly to cryptominers looking to make a quick buck.

Efforts are being made by companies like Nvidia and MSI to create purpose-made mining products to keep gaming card stock available for the PC gaming community. Whether this will be successful or not is unforeseeable, and it’s likely we will continue to struggle to acquire these GPUs for some time. U.S. Vice President Kamala Harris' visit to Guatemala faced minor delays after her plane had to return to Joint Base Andrews in Maryland due to a technical issue, a spokesperson for Harris said on Sunday.
Read more

Blinken: U.S., South Korea Are Committed to Denuclearization of...

U.S. Secretary of State Antony Blinken discusses the bilateral relations with South Korea and the tensions on the Korean Peninsula. He also talks about the shootings at three Asian massage parlors in the Atlanta area in which a White man allegedly killed six …
Read more

Cristiano Ronaldo: Are Portugal a better team without the...

Portugal manager Fernando Santos has a dilemma on his hands - embrace the next generation, trust in his country's greatest player or try to combine both approaches?
Read more

About 1,200 homeless people will receive a jab in the coming weeks, according to the Public Health Agency.
Read more

New York City’s school system, the largest in the U.S., has been temporarily blocked from imposing a mandate forcing teachers and other staff from getting vaccinated against Covid-19, according to a ruling from a federal judge. That mandate was scheduled to g…
Read more

Diver from Derby who died at Orkney’s Scapa Flow...

David Pleace, from Derby, had been reported missing following a dive on Sunday.
Read more

Voluntary euthanasia has become legal in a fifth Australian state, more than 20 years after the country repealed the world’s first mercy killing law for the terminally ill
Read more

Scammers are sending out fake order or shipping confirmation emails to trick potential victims into calling them and giving up their payment details.
Read more

On the sidelines, Hezbollah looms large over Gaza battle

Raman Pratasevich said he was fully cooperating with investigators and declared he respects the authoritarian president he opposed for years.
Read more

"Sunday Morning" checks out what were the biggest movies and songs of the season.
Read more

Picked up a Black Friday Kindle deal? Here are...

Not only are Amazon Kindle ereaders discounted over Black Friday, but so are cases, screen protectors and books themselves.
Read more

Before Sunday's north London derby, can you name the 11 players who have scored four or more in this fixture in the Premier League?
Read more

Google Docs is getting an upgrade that could mess...

Australia’s economy has shown resilience in the face of China’s trade curbs on a range of its commodity exports, Treasurer Josh Frydenberg will say in a speech Monday, with producers quick to redirect trade to other markets.
Read more

The Walmart 4th of July sale is live, and we're rounding up the best deals, including TVs, grills, furniture, laptops, and more.
Read more

The war against terror in Europe must be fought using intelligence -- but to do that, officials say, Europe's security agencies have to share information better. After six attacks on European soil since the beginning of last year alone, there's never been mor…
Read more

TV news stations targeted in latest round of cyberattacks:...

At least two television news stations had their operations disrupted Thursday by what appeared to be a targeted ransomware attack, according to media reports.
Read more

As the Indian Covid variant spreads in the UK, doctors raise concerns about Monday's easing of rules.
Read more

Cleland served one term in the U.S. Senate and as administrator of the Veterans Administration, as Georgia secretary of State and as a Georgia state senator.
Read more

Credit Suisse Group AG said revenue at its securities unit rose more than 50% in the first two months and pretax income for the group was the best in a decade. At the same time, the Swiss lender warned it may have to take a charge on business related to Green…
Read more

The wife of Belgium's ambassador to South Korea is seen slapping a shop worker in CCTV footage.
Read more

With Week 3 of college football officially in the books, we can start to set aside the contenders from the pretenders, especially when it comes to Heisman trophy candidates.
Read more

Cullman, Ala. declared a COVID-19-related state of emergency on Thursday ahead of a scheduled Alabama GOP rally featuring former President Trump as Alabama struggles with a surge in new infections and a shortage of hospit...
Read more

Two members of an expert advisory committee questioned the need for a broad approval of a booster dose of the Pfizer Inc.-BioNTech SE Covid-19 vaccine at this time.
Read more

Can the Apple Watch Series 7 Work On Its...

This is the free version of Power On. If you like it, consider subscribing to Bloomberg.com—you’ll receive this newsletter several hours earlier and get exclusive access to a Q&A section with me.
Read more

Hard evidence that PC is the rightful home of the detective game.
Read more

U.S. faces rising prices for food and housing amid...

Discovery and WarnerMedia merge, creating one of the largest...

A group of Senate Republicans plans to present their latest offer to the White House on a major new infrastructure package on Thursday, with one member saying it will weigh in at almost $1 trillion.
Read more

Cuomo on sex harassment claims: ‘I didn’t do anything...

Where to visit Olympics venues in Japan

Tourists can't attend the Tokyo Olympics, but when it becomes safer to go to Japan's largest city, fans will be able to connect to these legacy holdovers they're seeing on television now.
Read more

Sheffield United midfielder John Fleck is given the all-clear to return to training after collapsing on the pitch last week.
Read more

The three parties that made big gains in Germany's national election aim by Friday to have a basis on which to decide whether to move to full coalition, the Free Democrats' Secretary General Volker Wissing said on Tuesday
Read more

Georgia Governor Brian Kemp slammed President Joe Biden's attempt to pull the MLB all-star game from Georgia as a 'distraction' from his administration's handling of the crisis at the southern border.
Read more

Xiaomi's Mi Mix 4 is expected to launch next month with top of the line specs and the latest under-display selfie camera setup.
Read more

The Senate has dodged a U.S. debt disaster by approving legislation to lift the federal limit on new borrowing by nearly a half-trillion dollars
Read more

Australia's government says it will rely on consumers and companies to reduce emissions and not legislation as it seeks to achieve net zero carbon emissions by 2050.Prime Minister Scott Morrison said that Australia...
Read more

Texas National Guard soldiers fired upon across border by...

Each year, older Americans lose millions of dollars to scam artists pretending to be loved ones who need money while traveling, but a new weapon is being used to stop the scammers in their tracks. Peter Greenberg reports.
Read more

Sen. Joe Manchin, the most pivotal Democratic swing vote in the Senate, threw a major wrench in his party's carefully crafted plans to pass a massive $3.5 trillion bill by month's end, demanding they take a "strategic pause" before considering a sweeping bill…
Read more

Microsoft is trying (yet) another way to push Edge...

Some Windows 10 users are now getting nagged to use Edge via the taskbar.
Read more

Manager Pep Guardiola says Manchester City must learn from Liverpool's difficult Premier League title defence and to not take anything for granted next season.
Read more

‘Master of None’ offers a radical new take on...

'Moments of Love,' the third season of 'Master of None' starring Lena Waite Naomi Ackie, is a radical portrayal of Black queer love and longing that defies stereotype while pushing the envelope on representation at a crucial time in American life and art, say…
Read more

An internal memo from the Centers for Disease Control and Prevention (CDC) reportedly says that the highly transmissible delta variant may cause worse illnesses than other versions of COVID-19 and is more contagious than...
Read more

When It Comes to Wrestling, Everything’s in a Name

Vince McMahon's wrestlers are trademarked IP subject to extraordinary levels of control The post When It Comes to Wrestling, Everything’s in a Name appeared first on The American Conservative.
Read more

Thousands rally in England and Wales over police legislation

AMA, Other Medical Orgs File Friend of the Court...

More than a dozen of the United States' top medical organizations have filed a brief arguing that the controversial abortion law undermines medical ethics.
Read more

COP 26: How much is the developing world getting...

Are rich countries living up to their climate promises to the developing world?
Read more

Biogen’s drug for Alzheimer’s with Eisai gets breakthrough status...

EA confirms that HyperMotion tech will only be available on next-gen consoles and Google Stadia.
Read more