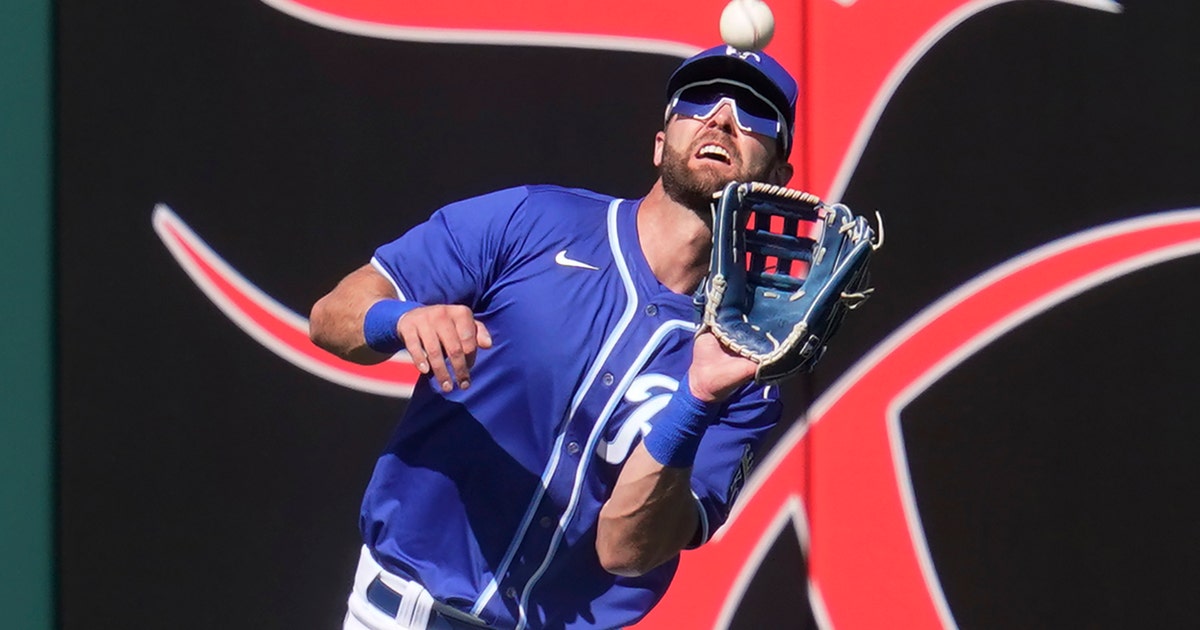 The Royals improved to 12-3 in Cactus League play and lead all MLB teams in wins as the halfway point of spring training nears. Kansas City cruised to its third straight victory behind a five-run first inning rally and a strong start from veteran pitcher Danny Duffy.

Four of the first five Royals reached base in the first-inning rally. Salvador Pérez put Kansas City on the board with a two-run double, his first of two hits on the day. Pérez then scored on a one-out single from Michael A. Taylor.

The Giants removed starting pitcher Anthony Banda with two outs in the inning. After the pitching change, Kansas City jumped to a 5-0 lead on a two-run home run from Bubba Starling.

Banda returned to pitch in the second inning under MLB’s modified spring rules. He allowed two more hits but held the Royals scoreless in that frame.

Duffy dominated in his third spring start, firing four perfect innings. He struck out four hitters without allowing any walks.

The Giants had slightly better luck against the Royals bullpen. Outfielder Alex Dickerson broke up the combined no-hit bid in the fifth inning, while infielder Mauricio Dubón drove in San Francisco’s lone run on a groundout in the seventh inning.

Royals prospect Seuly Matias delivered a pinch-hit single in the eighth inning, then scored the game’s final run on a wild pitch.

Kansas City hosts its second straight game on Tuesday as the Seattle Mariners pay a visit to Surprise, Arizona. The game will air on FOX Sports Kansas City at 8:05 p.m. CT. ‘No school for becoming queen’: Dutch princess in limelight

Texas Governor Greg Abbott, who has used executive orders and court rulings to combat mask mandates and other anti-pandemic measures, has tested positive for a breakthrough case of Covid-19.
Read more

Cruz faces backlash on social media after joking about...

Sen. Ted Cruz is facing renewed backlash from users on Twitter after sharing a news alert from a local Texas station promoting the return of flights to Cancun.
Read more

Wimbledon champion Ashleigh Barty says it was a "miracle" she was at the event and that her team kept from her the chances of her recovering from injury in time.
Read more

Activists say more than 80 people were killed in the city of Bago in protests against the military coup.
Read more

Asian shares are higher, tracking a rally on Wall Street after signs of progress on resolving the standoff in Congress over the debt ceiling
Read more

A key House Democrat has urged the Senate to merge parts of his $715 billion bill into President Joe Biden's bipartisan deal.
Read more

Jen Psaki says the quiet part out loud about...

Never Forget: One Man’s Journey to Honor His Fallen...

Colorado authorities are investigating why a gunman opened fire at a weekend birthday party, killing his girlfriend and five other adults inside a house trailer before killing himself
Read more

Alec Baldwin responds to Cuomo resignation: ‘This is a...

Alec Baldwin is calling New York Gov. Andrew Cuomo's (D) resignation a "tragic" moment for the Empire State."Regardless of what you think of Cuomo, this is a tragic day," the actor - a fierce critic of former Presi...
Read more

Totally Rated Season 2 continues with the long-awaited trailer for Spider-Man: No Way Home, and news from Gamescom 2021.
Read more

Some of the media fact-checkers apparently are finally waking up.
Read more

Paul Millachip, 57, originally from the UK, was attacked while swimming at Port Beach on Saturday.
Read more

United Airlines CEO Scott Kirby said on Sunday that America could face a possible pilot shortage. During an interview with Axios on HBO, Kirby said the United States could face the shortage because the military is not producing as many...
Read more

The Democratic National Committee (DNC) on Thursday announced it was bringing on a slate of veteran campaign hands to beef up its communications staff heading into the 2022 midterm cycle.Among the hires are Lucas A...
Read more

A CNN columnist claimed Thursday that 1619 Project creator Nikole Hannah-Jones ultimately lost her offer for a prestigious tenured position at the University of North Carolina because of a preponderance of conservative power in U.S. academia
Read more

First schools reopen in Mexico in southern state of...

For the first time in a year, Mexican school children have returned to classrooms — at least in the southern state of Campeche
Read more

Welcome to Hillicon Valley, The Hill's newsletter detailing all you need to know about the tech and cyber news from Capitol Hill to Silicon Valley. If you don’t already, be sure to sign up for our newsletter by clicking HERE. Welcome! Follow...
Read more

United Rugby Championship bosses are set to resist the temptation to play matches in South Africa this year despite the country being taken off the UK travel red list.
Read more

The Economic Lessons of Evergrande

Hello. Today we look at the economic fallout from Evergrande’s financial woes, the costs and benefits of the global chip shortage and uneven job creation in the U.K.
Read more

Oil prices fell more than 1% on Monday, dropping for a third session, as government-imposed restrictions on mobility to counter the spread of the Delta variant raised worries about a recovery in fuel demand.
Read more

West Ham United stunned Premier League leaders Chelsea with a 3-2 win on Saturday after coming from behind twice and then claiming all three points with a bizarre late goal from substitute defender Arthur Masuaku.
Read more

The final Test of England men's Ashes tour of Australia this winter will be in Perth rather than Sydney.
Read more

RingCentral is getting a major AI-flavored upgrade

Rep. Louie Gohmert (R-Texas) appeared to downplay the deadly Capitol attack on Jan. 6 during a conference this past weekend that was attended by many QAnon conspiracy supporters, saying "it wasn't just right-wing ex...
Read more

Fauci urges: Put politics aside to get vaccinated against...

National advocacy group Black Voters Matter gathered in Washington, D.C., on Saturday with other organizations to rally in support of making the nation's capital the newest U.S. state. ...
Read more

A study published Friday found the portion of positive COVID-19 tests among vaccinated school employees in Philadelphia was 95 percent lower than unvaccinated workers, according to the Centers of Disease Control and Prevention (CDC). The...
Read more

The British twins who set up a black-founded $1bn...

Unbuckled car passengers in back seats put lives in...

A battle is underway over back seat auto safety. New concerns surfaced last month when Nobel Prize winner John Nash and his wife died in a taxi car crash on the New Jersey Turnpike. They were both riding in the back and neither wore a seat belt. Kris Van Clea…
Read more

The National Rifle Association (NRA) filed an appeal on Wednesday after a judge last month upheld the Florida law that prohibits people younger than 21 from purchasing guns.Former Fl...
Read more

The FBI is investigating a suspicious package filled with white powder that was sent to Republican Sen. Rand Paul's home in Kentucky today.
Read more

Electric bike sales are soaring, despite high prices and confusing rules over their speed and power.
Read more

The Audi E-Tron GT Leaves No Doubt That the...

But how does test-driving the electric sport sedan compare to the Porsche Taycan?
Read more

President Biden is addressing the nation's supply chain problems by calling for two key California ports to work 24 hours a day. Some are concerned that the plan doesn't go far enough to address the issues facing warehouses and truckers to get backlogged good…
Read more

St Johnstone prepare for their Europa League return with Galatasaray by fighting out a 1-1 Scottish Premiership draw with Motherwell.
Read more

Police are responding to reports of disorder at the Cloughfern roundabout in the O'Neill's Road area.
Read more

What to know before filing your tax return

H&R Block President and CEO Bill Cobb tells CBSN about the changes to the 2015 tax filings and how to prepare.
Read more

Russian authorities Tuesday arrested prominent opposition politician Dmitry Gudkov amid a broader clampdown by the Kremlin against high-profile critics.Associates of Gudkov said on his ...
Read more

Moet Hennessy and Campari Group are forming a joint venture to invest in fast-growing wine and spirits online companies as the pandemic fuels the shift to e-commerce.
Read more

China's Bao Shanju and Zhong Tianshi adorned the red pins on the medal podium on August 2 after defeating Germany and Russia to snatch gold in the women's velodrome cycling in Tokyo.
Read more

Sen. Kyrsten Sinema (D-Ariz.) is leaning into her role as the Senate's newest dealmaker amid rising pressure from progressives who are increasingly irritated over the centrist's support for the filibuster.Sinema is...
Read more

UK arrests over 100 in protests against policing bill

OPINION: Republican cries of "socialism" are out of step with the country's mood.
Read more

In my trip across Route 66, every meter is meaningful, and now I can't run without a GPS watch tracking my every move.
Read more

Andre "Dr. Dre" Young and his business partner have teamed with the Los Angeles Unified School District to bring their vision to life.
Read more

BBC journalists walk out of press conference in Belarus...

Two BBC correspondents walked out of a Belarusian press conference Monday after officials produced detained journalist Roman Protasevich to discuss last month's forced landing of the commercial airliner he was on."...
Read more

Teen Becomes Fourth Person to Die From COVID in...

The Best Buy Black Friday sale begins on October 19 and the retailer has announced these early deals.
Read more

Kaine says he has votes to pass Iraq War...

Sen. Tim Kaine (D-Va.) said on Wednesday that he has enough GOP support to get a repeal of Iraq War authorizations through the Senate."We think we have 11 who have either cosponsored or voted for it or told the pre...
Read more

"Saturday Night Live" uncorked laughter over the CDC lifting its national mask recommendation for those who have been vaccinated.
Read more

The House of Representatives voted to hold Trump administration adviser Steve Bannon in contempt of Congress on Thursday.
Read more

British sportscar maker Lotus plans to open up to 70 showrooms in China by 2024 and start production at its new Wuhan factory next year to ramp up competition with rival Porsche, Chief Executive Feng Qingfeng told Reuters on Tuesday.
Read more

Latin Americans among those in building collapse, relatives abroad...

“I keep thinking of everything that happened, everything that could have happened and why it wasn’t me,” said a woman who used to lived in the collapsed building.
Read more

The winners of the 2021 BAFTA Award winners have been announced, with Nomadland dominating the event by taking home four gongs. Chloe Zhao's drama...
Read more

Iowa Gov. Kim Reynolds (R) on Friday signed into law a new bill condemned by housing advocates and city officials that would allow landlords to turn away tenants who receive Section 8 vouchers to help them pay rent....
Read more