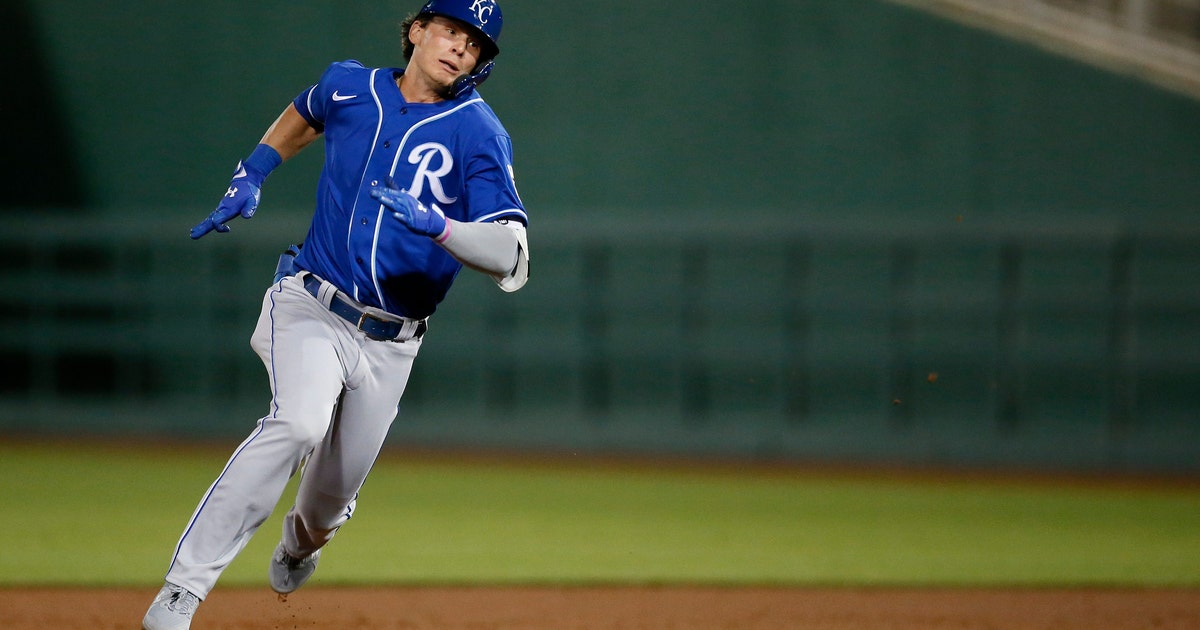 Starling gave the Royals a comfortable lead in top of the first inning, hitting a two-out, bases-loaded blast to make it 5-0. The Royals got on the board earlier in the inning when Witt Jr. scored from second base after the Dodgers made a series of errors. The 20-year-old infielder took a leadoff walk to start the game.

After Seager responded with a solo blast in the bottom of the first, Witt Jr. hit a home run to deep left field his third of the spring to give the Royals a 6-1 lead in the second. The 2019 first-rounder has a .333 batting average and a 1.046 OPS this spring an extraordinary showing for a player who has just 37 games of professional experience, all in the Arizona Rookie League.

2017 first-rounder Nick Pratto added on to the Royals’ lead in the ninth inning with an RBI double. Nick Loftin, the No. 32 overall pick in last year’s draft, followed with a base hit that drove in Pratto.

Brady Singer delivered a strong start for the Royals, striking out six while allowing one earned run on four hits and a walk over four innings. Ervin Santana followed Singer and threw two innings, giving up two earned runs on three hits.

Jake Brentz allowed one earned run in the fifth on a hit and a walk with two strikeouts. Jake Newberry and Josh Staumont held the defending World Series champs scoreless over the final two frames, with Newberry striking out two while yielding one hit in the eighth and Staumont punching out one over a perfect ninth.

The Royals are back in action on Monday afternoon as they host the San Francisco Giants. Danny Duffy is slated to make his third start of the spring.

Cybercriminals are abusing Christmas delivery anxiety to harvest your credentials

Help us spotlight who’s shaking up race, politics and policy

Microsoft OneDrive gets photo editing features… but it’s no Photoshop

The calming hues coming from the Lumie Bodyclock Spark 100 make getting up in the morning a little more palatable.
Read more

Microsoft buying Nuance in deal worth $19.7B

Microsoft, on an accelerated growth push, is buying speech recognition company Nuance in a deal worth $16 billion
Read more

President Biden on Friday named Jessica Stern as the State Department's U.S. special envoy to advance the human rights of LGBTQI+ persons, an announcement that coincides with the White House's celebration of Pride month....
Read more

The prospect of Merck’s pill to treat Covid hitting the market soon is raising the question of who will get initial access to the drug and who won’t. A small group of countries is already lining up to buy molnupiravir, sparking worries that poorer regions tha…
Read more

“The Defiant Ones” explores Jimmy Iovine’s relationship with Dr....

Osbourne off ‘The Talk’ after inquiry into racism discussion

Howard University President Wayne A.I. Frederick is calling for students to end their weeks-long occupation of the school's student center. "There may be areas where we agree to disagree. That's ...
Read more

Just days before the CMA Awards, artists, academics and historians gathered in Nashville to address racial representation within the genre
Read more

Justin Sink on Latest Out of Afghanistan (Audio)

See the winners so far and all the nominees for this year's British Academy Film Awards.
Read more

California oil spill believed to be much smaller than...

The amount of crude oil spilled in an offshore pipeline leak is estimated to be one-fifth of what officials initially feared, a Coast Guard official said.
Read more

President Biden views the country as being at an "inflection point" that has spurred his support for bigger spending and more progressive policies, but he doesn't view himself as a true progressive, according to an interv...
Read more

A group of Senate Democrats introduced a bill on Wednesday that intends to block funding for the 2026 World Cup unless the U.S. Women's National Team (USWNT) receives equal pay.The ...
Read more

Tesla’s Musk Says Company Would Be Shut If Cars...

Tesla Inc. Chief Executive Officer Elon Musk used an opportunity to speak to an audience in China to strenuously deny the electric carmaker would ever use a vehicle’s technology for spying.
Read more

Phnom Penh, Cambodia (AP) -- In his position of authority, the former head of the Khmer Rouge shared joint culpability for the regime's atrocities in Cambodia in the 1970s, prosecutors said Wednesday, rejecting defense arguments that he should not be held res…
Read more

Rihanna makes more money from her make-up than from her music and acting work.
Read more

HMD Global has confirmed the next Nokia tablet is coming in October, and it's the latest in a growing trend.
Read more

Amid the backlash against Laurel Hubbard, the first transgender athlete who made history for making the Olympics after qualifying for New Zealand’s weightlifting team, a former female Olympian said Tuesday that it "sets a dangerous precedent."
Read more

County Championship: Kent and Northants play out draw as...

How to Ace Physics Class (Even if You Don’t...

It’s back-to-school season, so here are some tips for how to get the most out of college science courses.
Read more

The World Test Championship (WTC) is a great way to inject excitement into cricket's longest format but the final should be a best-of-three affair, said India captain Virat Kohli after his side lost to New Zealand in a rain-hit one off title decider.
Read more

How demand is outstripping supply and hampering recovery

The recovery from the coronavirus pandemic has thrown off the balance between supply and demand, creating political challenges for both the White House and Federal Reserve.A flood of fiscal and monetary aid, an accelerated vaccine rollout and easing...
Read more

No End In Sight For Latest Meme Stock Frenzy...

Turkey halts flights for some Mideast citizens to EU’s...

Turkey’s Civil Aviation Authority says the country is halting airline ticket sales to Iraqi, Syrian and Yemeni citizens wanting to travel to Belarus, which in recent months became a route for migrants and refugees to enter the European Union
Read more

England vs Austria live stream: how to watch Euro...

With Euro 2020 fast approaching, it's time for Gareth Southgate to set the tone and settle on his best 11 - here's how to get an England vs Austria live stream wherever you are.
Read more

Jury awards millions in damages for Unite the Right...

Hundreds of white nationalists descended on Charlottesville for the rally on Aug. 11 and 12, 2017, ostensibly to protest city plans to remove a statue of Confederate Gen. Robert E. Lee.
Read more

A small plane crashes into a car on a...

Two people were killed and two others seriously injured after a single-engine aircraft crashed into a car on a roadway in Florida on Monday, officials said.
Read more

Presented by Facebook Happy Wednesday, Illinois. With the holiday weekend coming up, Im getting my menu ready. If youre a grill master, Id like...
Read more

Officials: Many Haitian migrants are being released in U.S.

Many have been released with notices to appear at an immigration office within 60 days.
Read more

What’s Next for Moderna?

The Olympic Village recorded its first coronavirus case on Friday days before the Olympics are set to begin in Tokyo.
Read more

Prosecutors say rioters committed roughly 1,000 assaults on federal officers during the Jan. 6 insurrection on the U.S. Capitol. In a ...
Read more

Aquaman 2: release date, cast and what else we...

Little Kylie Rae Brooks has been listening to Beyoncé since she was in the womb. So when it came time to choose a Halloween costume this year, reenacting "Lemonade" was the obvious choice
Read more

President Biden was mocked for "saying the quiet part out loud" on Wednesday when he admitted at the outset of his press conference in Geneva he would only be calling on reporters from a prepared list.
Read more

Man charged with homicide in shooting death of Milwaukee...

Canadian sentenced to 11 years in China in spying...

Canadian Michael Spavor, who was detained after his government arrested an executive of the Chinese tech giant Huawei, has been sentenced to 11 years in a spying case.
Read more

Caught in the midst of a bullying scandal, South...

Twin volleyball players from South Korea, Lee Jae-yeong and Lee Da-yeong, have completed a transfer to Greek club PAOK Thessaloniki, months after being dropped from their national and club sides following claims of bullying.
Read more

Pope compares racism to a virus

Pope Francis compared racism to a virus on Sunday, writing on Twitter that it is "always lurking," even if it appears to disappear at times."Racism is a virus that mutates easily and instead of d...
Read more

The Covid pandemic has made this an unusual Holyrood election, but the constitution is still the main dividing line.
Read more

The iOS 15 beta is great, but it still doesn’t fix this decade-old bug that leaves me hanging in the worst way.
Read more

India opener Smriti Mandhana makes her highest score in Tests, but the first day of the one-off day-night Test against Australia is heavily affected by rain in Carrara.
Read more

Speaker Nancy Pelosi (D-Calif.) took a jab at Republicans on Wednesday over COVID-19 vaccinations, arguing the GOP has been "delinquent" in embracing the science of vacc...
Read more

BBC News looks at some of the claims made by the governor and his challengers on the campaign trail.
Read more

A New York federal judge said she's had enough with a 'deluge of letters' in the Purdue Pharma appeal.
Read more

Highlights of the eighth day at the French Open, the second Grand Slam of the year, on Sunday (times GMT):
Read more

The European Union’s top economy official says that the recovery measures the EU and its 27 member states have in the works to emerge from the pandemic total around $5.85 trillion
Read more

Ex-South African President Jacob Zuma hands himself over to...

Flipkart launches Flipkart Boost – We explain what it...

On Fox Across America with Jimmy Failla, Rep. Andy Biggs explain why the Freedom Caucus and other Republicans have called for Rep. Liz Cheney & Rep. Adam Kinzinger to be expelled from the GOP conference after being chosen for the Jan. 6th commission. “They ar…
Read more

Half a million Huawei Android phones hit by Joker...

Halo Infinite appears as though it will support Dolby Vision and Dolby Atmos, according to a now removed page on Dolby’s website.
Read more

Hearts and Motherwell fans need to show proof of double vaccination on Saturday at Tynecastle despite the Scottish government's "grace period" over enforcing the certification scheme.
Read more

Best looks from the 2021 Grammy Awards