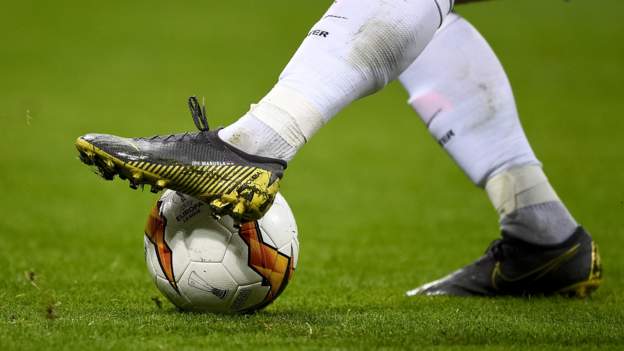 The Fifa Fund for Football Players launched on 1 July 2020

World players’ union Fifpro says it has received claims for almost $60m (£43.75m) from players whose clubs have not paid their wages.

Around 1,400 players have made claims, to be paid from the Fifa Fund for Football, which was set up in February 2020.

The fund, set up in response to the coronavirus pandemic, is specifically to support players who have not been paid and had no chance of recovering the outstanding amounts due.

Fifpro says the problem is growing, with Greece and Turkey known to be particular hotspots, and called on football governing bodies around the world to help tackle it.

“The confederations should be doing something similar to ‘Fund for Football’,” a Fifpro spokesman told BBC Sport.

“Typically, clubs go bust and then start up again, leaving players in the lurch.” Newsom wants to hand out cash before California recall...

California Gov. Gavin Newsom embarked on a cross-state road show to trumpet the fruits of an astonishing $75.7 billion state surplus thanks to soaring capital gains during the pandemic.
Read more

Presented by Local Solar for All THE BUZZ NEWSOM MANDATES: There is no definitive Covid-19 vaccine mandate in California. But on Monday, Gov. Gavin...
Read more

The coronavirus continues to plague holiday travel. The recent surge in cases has left airlines with employee shortages and bad weather has only made things worse. Tom Wait reports.
Read more

Covid: Australia’s Qantas says all staff must be vaccinated

The Supreme Court will revisit the issue of campaign finance Wednesday, hearing a challenge brought by Republican Sen. Ted Cruz of Texas to a federal cap on candidates using political contributions to recoup personal loans they make to their campaigns.
Read more

Covid-19: Vaccine offered to 42-plus age group in England

Those who are due to turn 42 by 1 July can also book Covid jabs on the NHS website.
Read more

A majority of likely California voters want Gov. Gavin Newsom recalled next month, according to a new poll from Survey USA ...
Read more

Jury seated in trial of men accused of murdering...

The opening statements in the murder case likely will begin Friday.
Read more

Bukayo Saka: Why ‘mesmeric’ teenager could be future Arsenal...

A 'mesmeric' talent who could have a big few months ahead with Arsenal and England - we speak to the key figures in Bukayo Saka's development.
Read more

She's been an artistic chameleon for more than six decades. Now, at 82, Judy Chicago is being celebrated with her first career retrospective, at San Francisco's de Young Museum. Correspondent Martha Teichner talked with Chicago about how she gave up being lik…
Read more

Tigrayan rebel forces are said to have made advances in recent days. This has been denied by the Ethiopian government. Thousands of people have been killed and millions displaced after conflict erupted almost eight months ago. We hear from medical staff in Me…
Read more

Anti-abortion activists celebrated Thursday after the Supreme Court declined to halt a Texas law that effectively prohibits almost all pregnancy terminations in the state.But Democrats believe it...
Read more

India is driving a surge of cases in Asia, reporting more than 200,000 new infections every day for the past week and a record death toll on Wednesday. In Japan, Tokyo and Osaka will ask the government to declare a state of emergency, looking to contain surgi…
Read more

China’s finance ministry is considering transferring its stake in China Huarong Asset Management Co. to a unit of the nation’s sovereign wealth fund that invests in financial companies, according to a person familiar with the matter.
Read more

The Latest On Bonds, Interest Rates, And Markets (Podcast)

A woman has learned a little more about her late grandmother now that she’s gone through a 73-year-old scrapbook of her grandma’s former beaus.
Read more

Republican Katie Britt raised more than $2 million for her Senate campaign in Alabama last month, shattering a statewide quarterly record for a GOP candidate in a federal race.Britt, who launched her campaign in ea...
Read more

And the Biden administration flip-flops on refugee caps.
Read more

Pacific Rim leaders at the annual Asia-Pacific Economic Cooperation forum agreed to increasing coronavirus vaccine access, but not to the U.S. hosting the forum in 2023.The forum is ...
Read more

Smugglers in the people-trafficking hub of Zaranj told the BBC the number of Afghans leaving has more than doubled since the Taliban takeover.
Read more

WH urges Americans to get vaccinated as B-117 variant...

The White House on Friday urged as many Americans to get vaccinated as quickly as possible as the B-117 variant surpassed 44% of all COVID cases.
Read more

Actor Gavin MacLeod of ‘The Love Boat’ and ‘Mary...

Gavin MacLeod, known for his roles on "The Mary Tyler Moore Show" and "The Love Boat," died Saturday, his nephew Mark See told Variety. He was 90 years old.
Read more

Missed the second half of the show? The latest on reopening schools while facing the Delta variant and how to avoid "high conflict."
Read more

Alpine skier Mikaela Shiffrin's beloved father died in 2020, and it's given her a change in perspective before Beijing 2022.
Read more

Bloomberg Markets: China Open is the definitive guide to the markets in Hong Kong and on the mainland. Rishaad Salamat, David Ingles, Tom Mackenzie and Yvonne Man bring you the latest news and analysis to get you ready for the trading day. And powered by more…
Read more

Highest Lebanese state visit to Syria since war to...

A high-level Lebanese government delegation is in Syria, the first official state visit since Syria's civil war broke out more than a decade ago
Read more

Westminster Dog Show: Time, schedule and what you need...

For many people, it's just another cute dog show, but for the serious dog lovers, the 145th Westminster Kennel Club Dog Show is no joke.
Read more

Twenty-year-old Daunte Wright was fatally shot by a police officer Sunday in the Minneapolis suburb of Brooklyn Center, after being pulled over for a minor traffic violation, setting off days of protests
Read more

Is Your Name Ruining Your Life?

Name discrimination is still alive and well in 2021—and I can’t help but wonder how it’s shaped others’ perceptions of me.
Read more

Doctors in India's capital are forced to turn patients away and plead for vital supplies of oxygen.
Read more

California teacher placed on leave after video shows her...

A Southern California high school teacher has been placed on leave after a viral video posted Wednesday showed her wearing a fake Native American headdress while chanting and dancing.The footage showed the teacher...
Read more

The European Handball Federation (EHF) on Monday issued fines against the Norwegian women's beach-handball team over their decision to wear shorts instead of bikini bottoms."The Disciplinary Commission at the Beach...
Read more

A prominent opponent of Belarus' authoritarian president​ was arrested Sunday after the airliner in which he was traveling was diverted.
Read more

Two GOP political operatives have been indicted for their involvement in a scheme to solicit an illegal campaign contribution from a Russian national in 2016.Jesse R. Benton, 43, and Roy Douglas ...
Read more

Large U.S. airlines are carrying about $20 more debt per passenger than before the pandemic, according to the chief executive officer of Frontier Group Holdings Inc., who predicts the carriers will start addressing those obligations with higher fares.
Read more

When the coronavirus pandemic hit the Pacific Northwest states of Oregon Washington, their governors quickly reacted with shutdowns
Read more

Biden’s crime-fighting plan calls for more cops. So much...

The president's unstated but real denunciation of the progressive anti-police movement is a smart policy and political call.
Read more

Tiny Himalayan kingdom of Bhutan vaccinates 90% of its...

Bhutan has fully vaccinated 90% of its eligible adult population in a week with Covid-19 shots, a feat that has been described as a "success story" and a "beacon of hope" for other countries in the region, the UN Children's Fund (UNICEF) said Tuesday.
Read more

An attorney for former New York Gov. Andrew Cuomo (D) said on Thursday that state Attorney General Letitia James' investigation into the former governor was "shoddy" and claimed that the outcome was "predetermined."...
Read more

A judge’s earlier ruling to block the use of the public health order for removing migrants had been scheduled to go into effect on Thursday.
Read more

Beaten down by the pandemic, some laid-off or idle restaurant workers have pivoted to dishing out food with a taste of home
Read more

‘Bachelorette’ Katie Thurston opens up about past sexual assault:...

The 30-year-old spoke about a past sexual encounter she had that was not consensual and how it led her to have a difficult relationship with intimacy.
Read more

The right college tech doesn’t have to be expensive, especially when you can get a 10% discount – or more.
Read more

The booster third dose continues to give high protection to people 65 and over, data suggests.
Read more

Walt Disney Imagineering was selected as one of Fast Company’s 2021 Best Workplaces for Innovators. This honor recognizes companies that successfully foster cultures of innovation and encourage employees to discover, explore and invent.
Read more

Trades by the Dallas and Boston Fed presidents have sparked calls by some progressive groups for their resignation.
Read more

Biden aims for quicker shots, ‘independence from this virus’

In a prime-time address, President Joe Biden has outlined his plan to make all adult Americans eligible for vaccination by May 1 — and he raised the prospect of beginning to gain what he called “independence from this virus” by the Fourth of July
Read more

Mexican regulators approve $31B deal that could create Mexico-Canada-US...

Rep. Tim Ryan's (D-Oh.) Senate campaign on Wednesday said it had raised a record $2.5 million in the third quarter of the year.The haul, which the campaign said is the most-ever for a Senate candidate in the third...
Read more

"The antivaxxers are really good at creating internet sites and misinformation that scare the heck out of people," industry expert said.
Read more

Senate Democrats have introduced their latest version of a sweeping election reform bill to counter voting restrictions that have passed in GOP-led states.
Read more

Spain accuses the former president of the Catalonia region of sedition, and wants him extradited.
Read more

I Wanted to See More People That Looked Like Us in the...