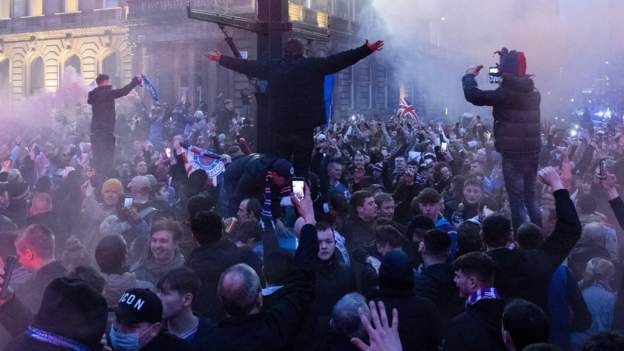 Rangers and Celtic need to show “strong leadership” in urging fans to stay away from Sunday’s derby, says the chairman of the Scottish Police Federation.

The Scottish government has yet to decide if the game at Celtic Park will go ahead as scheduled.

“It’s not just about one statement or one day’s worth of social media,” David Hamilton told BBC Sportsound.

“It needs to be consistent and persistent.

“People who are putting the match at risk need to be treated by the clubs from a disciplinary aspect, with (the promise of) bans and so on.

“We need to see strong leadership from the clubs,” added Mr Hamilton. “So far we’ve seen a few videos but it needs to be continuing and there needs to be some kind of understanding about what the consequences of this are. Not just on an individual basis but in terms of what this could mean for the game.”

First Minister Nicola Sturgeon has welcomed statements from both clubs asking supporters not to gather.

“I hope the clubs will continue that over the next few days,” Sturgeon said during Monday’s coronavirus media briefing.

“It’s not just one statement and the work is done. As we know from experience of the last year, these communications are really important on an ongoing basis.

“I spoke to the chief constable personally last week about his views on what might transpire if the Old Firm match goes ahead. The justice secretary (Humza Yousaf) has been in contact with police and we will be in further contact with police over the course of this week.

“They will have intelligence of their own on whether it appears to them that fans in the main are following the advice or whether there is a significant risk of fans coming out to gather. On the basis of all of that we will have to take a judgement.

“I never want to be in a position, of saying football matches can’t go ahead, or any of the other things that we really enjoy in life can’t go ahead.

“But that’s the reality while we are still in this position. Big gatherings present a risk of transmission and we are trying to get transmission as low as possible so that we can open up all of the things we enjoy doing.

“That’s why we have to be careful and considered about this. I think a lot of people felt aggrieved at what happened a week past Saturday and Sunday, and understandably so because everybody is still living under these difficult restrictions.” GOP leader won’t say if election was stolen under...

President Biden on Thursday hailed the expanded child tax credit as a "transformative" achievement that would offer needed relief for families and made the case for Congress to further extend the payments in forthcoming l...
Read more

26-year-old photographer Flo Ngala got her big break capturing icons from Cardi B to Stacey Abrams. After George Floyd's murder, she began to shift her focus to photojournalism. Vladimir Duthiers reports.
Read more

Cyberattack reported in dozens of countries

The 33-year-old has not been seen since she disappeared while walking home in Clapham, London last week.
Read more

At least two people have died amid flooding caused by a rare storm in the city of Catania.
Read more

Barrie Henderson was devastated when his family restaurant closed, but now plans to bring back the family name.
Read more

"I woke up at 4 o'clock this morning. Two marines at my door telling me that my son was dead," she told a conservative radio host.
Read more

"Large groups of mostly children continue to be exploited by smugglers who leave them at the border for agents to encounter," a Border Patrol official said.
Read more

‘I’ve Photographed Stars From Nirvana to Kobe Bryant—Here’s What...

The joy of this life is that I've been able to meet all these people. I shot Brad Pitt before Thelma and Louise came out. He was the nicest guy in the world. It was the same with George Clooney and Jennifer Aniston.
Read more

At least six families from a San Diego suburb with a large refugee population are among those stuck in Afghanistan after going back to the country over summer break to visit grandparents and other relatives.
Read more

Tom Barrack Jr., the founder of Colony Capital Inc. and a former top fund-raiser for Donald Trump, was arrested on charges of acting as an unregistered agent of a foreign government.
Read more

What is a Cloud POS system?

The days of traditional POS systems are quickly waning as Cloud-based POS systems take over the marketplace and encourage retailers to evolve and enhance the overall customer experience.
Read more

‘The View’ pushes back against CNN’s Don Lemon over...

The ladies of "The View" pushed back Thursday against remarks made by CNN anchor Don Lemon the previous night regarding the Ma'Khia Bryant shooting.
Read more

Macron among 14 heads of states on potential spyware...

Chelsea manager Thomas Tuchel says he is delighted with the "perfect day" had by Trevor Chalobah who scored a stunning goal on his debut as his side beat Crystal Palace 3-0.
Read more

Greek Prime Minister Kyriakos Mitsotak on Monday apologized for the country’s wildfire response that has caused thousands to evacuate their homes."I fully understand the pain of our fellow citizens who saw their homes or property burned,"...
Read more

The Biden administration on Thursday unveiled new rules on immigration arrests, directing U.S. officials to focus on detaining and deporting immigrants who pose a threat to national security or public safety.
Read more

Rookie quarterback Trey Lance will make his first start for the San Francisco 49ers after Jimmy Garoppolo was ruled out of this week's game with a calf injury.
Read more

Nearly 40,000 Afghans are scattered at sites across the globe, stuck for an indeterminate amount of time as they await vetting by the U.S. after fleeing the country following a swift Taliban takeover. The American military rushed some 124,000...
Read more

Kushner Ally Pardoned by Trump Is Charged by New...

Ken Kurson was pardoned by Donald Trump over allegations of cyberstalking related to his 2015 divorce.
Read more

Covid in Scotland: No change to rules despite rise...

The first minister is not expected to remove any remaining mitigations, including face coverings, at her latest update.
Read more

A Christian monk is hanged for killing the head of desert monastery in 2018.
Read more

A Closer Look At The Housing Market (Podcast)

It is hoped the televised Tour Series race can help to promote the area's "beautiful scenery and attractions".
Read more

McLaren driver Daniel Ricciardo says he is "excited" about the return of F1 to Monaco but worried the race will feel "empty".
Read more

COVID-19 viral loads and what they can determine about...

The amount of coronavirus particles someone has can be an indicator of how likely they to spread the disease, but it's not a perfect measurement. Philip Kiefer, staff writer at Popular Science magazine, spoke with Anne-Marie Green and Vladimir Duthiers on CBS…
Read more

Japan recorded no daily deaths from COVID-19 for the first time in more than a year on Sunday, according to local media.
Read more

Stocks have climbed in Asia after a key measure of inflation in the U.S. came in lower than expected, easing worries that price pressures could push interest rates higher
Read more

Iraq and Lebanon on Saturday reached a deal that would allow Lebanon to sell Iraqi fuel to companies in exchange for Lebanese goods and services.
Read more

The United Kingdom has unveiled a £43 million ($59 million) fund to support Hong Kongers emigrating to the country under a new scheme for holders of British National (Overseas) passports.
Read more

Port was given a life sentence for the murders of four men in London who he met on dating apps, and an inquest into how police handled the case is now underway.
Read more

Federal prosecutors are recommending a 51-month prison sentence for Jacob Chansley, the Capitol rioter known as the "QAnon Shaman" for his outlandish outfits.In a sentencing memorandum ...
Read more

The Realme 8 5G is just about the cheapest new phone with 5G you can get right now – here's our verdict.
Read more

Cash windfall for Spanish youth can’t be spent on...

Niall Ferguson: Blind to History, Facebook Is in Trustbusters’...

I tried to warn Mark Zuckerberg that he risked becoming part Rockefeller, part Hearst. But the rest of us don’t have a good solution for what his platform has become.
Read more

James Levine, who ruled over Met Opera, dead at...

Conductor James Levine, who ruled over the Metropolitan Opera for 4 1/2 decades before being eased aside when his health declined and then was fired for sexual improprieties, has died
Read more

Wyoming coroner set to announce how Gaby Petito was...

The ruling marks the first time Serbian officials are convicted of crimes in Bosnia.
Read more

The most popular currency trade at the beginning of the year has splintered as Wall Street takes to opposing sides on the fate of the dollar in the world’s pandemic recovery.
Read more

Cynthia Sheng, the president of Jefferson Parish in Louisiana, says more people died in the days after Ida hit than died during the storm.
Read more

The unemployment rate fell to 4.8%, but the jobs growth was far below expectations.
Read more

There are few places in the world easier to get a Covid-19 vaccine than Hong Kong.
Read more

AirAsia boss says industry could return to normal next...

Alleged Capitol rioter who told others to ‘hold the...

A man who allegedly took part in the Jan. 6 Capitol riot and told others to "hold the line" and assaulted an officer was arrested on Wednesday, according to a Department of Justice statement.  Au...
Read more

Alistair Greig, who used investors' money for his "personal slush fund", has had his jail term reduced to 10 years.
Read more

Quarterback Cam Newton is cut by the New England Patriots in a surprise move ahead of the new NFL season.
Read more

Those Afghan evacuees flown to Ramstein Air Force Base can stay for several weeks, according to U.S. military officials.
Read more

Colombian authorities seized over 1.2 tons of cocaine worth $42 million from a boat headed toward Central America.
Read more

Perhaps this will be the year MinnesotaTwins CF Byron Buxton puts together all of that speed, power and skill — and stays away from those ruinous injuries.
Read more

Latest bipartisan gang tries to save Senate from itself

It’s no accident that 10 GOP senators are in the group: That's the number needed to break a filibuster.
Read more

Bex Wilson, from Leeds, started the charity Zarach after realising some pupils did not have a bed.
Read more

Sounds like the Xiaomi Mi 11T could get the...

One of the best aspects of the Xiaomi Mi 11 was its telemacro camera for close-up shots, and it might be back with the 11T.
Read more

Cuomo retreats from open news briefings that made him...