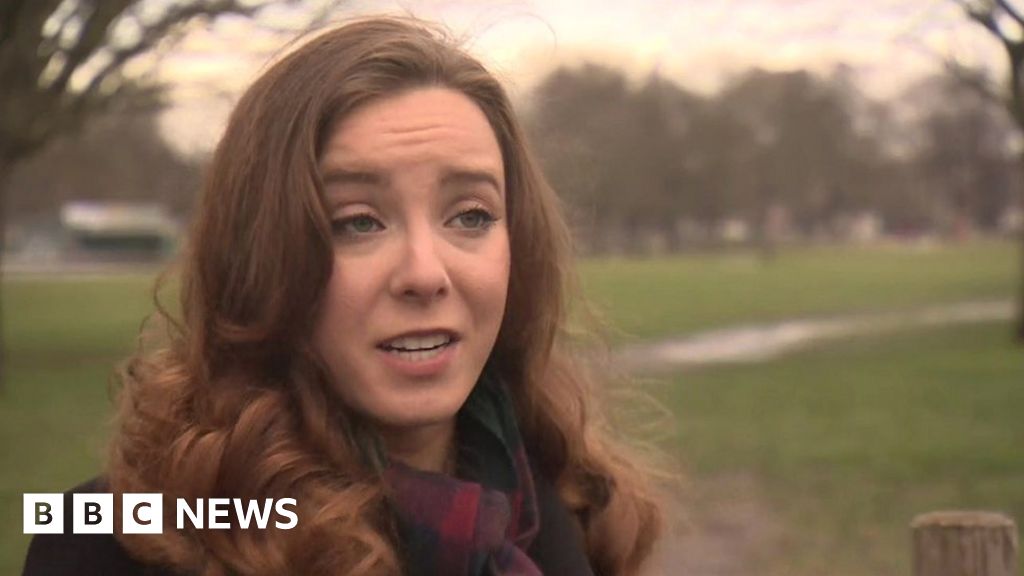 A woman who attended a vigil for Sarah Everard in south London says she was ignored when she tried to report a case of indecent exposure to police.

Georgina Ashby was on her way home from Clapham Common on Saturday when she was confronted by a man exposing himself.

Ms Ashby told the BBC she tried to speak to a group of police but a male officer told her they had “had enough with the rioters tonight”.

The Met Police said it was looking into the report.

The force has faced criticism for the way it handled the vigil after officers handcuffed and forcibly removed a number of women from the event.

Ms Ashby was among hundreds of people who had gathered to pay their respects to 33-year-old Ms Everard, who went missing while walking home from a friend’s house on 3 March.

On her way, Ms Ashby said she walked past a man who was standing on a pavement with “his genitals out of his fly”.

She told the BBC she went up to a group of “about five or six police officers” to ask them if they could address the situation as she was feeling “very uncomfortable”.

Ms Ashby added that she had been left “shocked” by the police’s reaction.

“It’s such a huge challenge that women don’t feel they have a safe space to even speak on these things let alone that these things even happen and continue to happen,” she said.

Two female officers from the Met have since visited Ms Ashby and the force has said it was looking into her report.

“We are aware of a report that she tried to report this incident at the time to officers in the area – this will be looked at,” the Met said. Gillespie leads No. 7 Villanova in 72-46 rout of La Salle

McConaughey says he won’t seek political office ‘at this moment’

I Was The First Woman to Negotiate a Nuclear...

Tales from inside the very male world of nuclear diplomacy.
Read more

Blinken meets with Qatari leader, who pledges to help...

Mahamat, 37, is the same age as the late Idriss Déby when he seized power in 1990.
Read more

The post on TikTok failed to make clear it was a marketing communication, a watchdog said.
Read more

Can Democrats hold together? Biden’s agenda depends on it

Middle-distance runner Shelby Houlihan said the Swiss Federal Tribunal on Friday denied a request for an emergency injunction which would have allowed her to race in the U.S. Olympic trials, ending her hopes of competing at this year's Tokyo Games.
Read more

A White hospital executive says he was fired and...

A White man has been awarded a $10 million payout in a wrongful termination lawsuit filed against his former employer, which he said fired him and replaced him with a White woman and a Black woman as part of a push for diversity, according to court documents.
Read more

Surgeon General: ‘I am worried for what is to...

Surgeon General Vivek Murthy on Sunday said he is "worried for what is to come" in the COVID-19 pandemic, as cases are increasing throughout the U.S. primarily among those who are not vaccinated....
Read more

China Locks Down Thousands in North as Delta Outbreak...

China locked down a county that has seen the most Covid-19 cases in the country’s latest delta outbreak, as an initial flareup in the northwest quickly spirals into a nationwide surge.
Read more

A seven-year-old girl was killed Sunday during a shooting outside a McDonald's restaurant in Chicago, police said.The girl, Jaylsn Adams, and her 28-year-old father, Jontae Adams, were in their car just after 4 p.m...
Read more

Paleontologists in Uzbekistan unearthed a 90-million-year-old rock containing the remains of a newly discovered dinosaur that is theorized to have once terrorized smaller species of tyrannosaurs.
Read more

Soulstorm’s messy start nearly made me give up –...

Soulstorm’s platforming is awkward and it’s packed with unnecessary features, but I can’t put it down.
Read more

The Caribbean disturbance has an 80% chance of development as it moves into the Gulf of Mexico.
Read more

The United Nations' High Commissioner for Human Rights Michelle Bachelet called for action in combating climate change ahead of a global climate summit in Scotland."This is a human rights obligation and a matter of...
Read more

The ubiquitous messaging service will add end-to-end encryption to backups, keeping your chats safe no matter whose cloud they're stored in.
Read more

The State Department issued the alert due to "security threats outside the gates of Kabul airport."
Read more

Foreign automakers are beginning to relax some COVID-19 protocols at their U.S. plants, including the wearing of masks, even as the Detroit-based carmakers and the United Auto Workers union continue to require workers to wear masks.
Read more

The White House, sources say, wants to include a hike in a bill that would require GOP votes to pass.
Read more

Stellar deal: Optus has the iPhone 12 for just...

White House to appoint Chanan Weissman as liaison to...

The White House is reportedly set to appoint Chanan Weissman as liaison to the Jewish community, following calls from many to take action amid a rise in antisemitism in the U.S.Weissman, who is c...
Read more

Scientists have determined that the Greenland shark is the world's longest-living vertebrate, and may even be able to live up to 400 years. Wildlife biologist Jeff Corwin joins CBSN to discuss.
Read more

Tech workers at The New York Times announced Tuesday that they have formed a union and will seek voluntary recognition from the paper.The group of software engineers, product managers and data analysts will be repr...
Read more

Copyright bots powered by a 1998 law threaten the...

Archaic intellectual-property laws like the Digital Millennium Copyright Act must be amended to ensure that online copyright enforcement is never used to withhold vital government information from the public.
Read more

Phil Foden used to joke about playing in the Champions League final. On Saturday, he'll do it for real.
Read more

Vodafone (VOD.L) said on Wednesday it has partnered with Amazon Web Services (AWS) (AMZN.O) to launch "edge computing" services for its business customers in the UK.
Read more

On The Money: Five takeaways from a stellar July...

Happy Friday and welcome back to On The Money, where we've never been spotted in ...
Read more

MSNBC received backlash on Tuesday for airing a chyron during "Andrea Mitchell Reports" which said "Texas Two Step" while showing a picture of Texas Gov. Greg Abbott, R., who is in a wheelchair, in a teaser for the upcoming segment Texas' controversial new el…
Read more

Stefanik — who took the number three GOP spot in the House from Rep. Liz Cheney, R-Wyo. earlier this year — may be going up against Democrat Matt Putorti next November, an attorney barred in New York City who registered to vote in the district he’s running to…
Read more

Presented by Facebook To view past editions...
Read more

Taking a closer look at the future of our...

The first step to success is simply to take supply chain issues more seriously, and for us to collectively recognize that supply chains do not operate in a vacuum. They operate in the context we create as policymakers and leaders in Washington.
Read more

The woman was pulled from the water off Helensburgh pier on Friday, but died at the scene.
Read more

Analysis: Transitory or here-to-stay? Investors try to read the...

From lumber prices to wages and inventories: Reading the clues around inflation has turned into an investor obsession.
Read more

A construction worker has died after a drilling rig that was being used to move heavy equipment fell on top of him while he was working.
Read more

Secretary of state faces same obstacles that have long stifled a peace process, including a hawkish Israeli leadership, Palestinian divisions and tensions around Jerusalem.
Read more

The US president highlights the rights abuses and the possibility of famine as fighting continues.
Read more

The 10 most popular toys this holiday season

Despite shortages, some of the hottest items are still available, according to industry publication Toy Insider.
Read more

FDA Puts All Hands on Deck to Review Pfizer-BioNTech...

U.S. drug regulators are taking an “all-hands-on-deck approach” to reviewing Pfizer Inc. and BioNTech SE’s Covid-19 shot for full approval in an effort to persuade as many as possible to get immunized.
Read more

Former Secretary of State Colin Powell was eulogized as a friend, a mentor, and a public servant of the highest order at a funeral on Friday at the Washington National Cathedral attended by President Biden and former Pres...
Read more

Have you heard Facebook is now called Meta?
Read more

Oregon state Rep. Mike Nearman, a Republican who is accused of allowing protesters into the closed state Capitol building while lawmakers were debating Covid-19 restrictions, is seen in new video, appearing to give insights on how to access the Capitol.
Read more

US climate envoy John Kerry failed to get a commitment from Delhi during his recent visit.
Read more

Micky Mellon is set to leave Dundee United after fewer than 12 months as manager.
Read more

Khalil Ferebee, the son of Andrew Brown Jr. who was fatally shot by deputies in North Carolina last week, said his father's death "was an execution" a day after viewing body camera footage on Monday."It was an exec...
Read more

BlackRock, other investment firms ‘killing the dream’ of home...

A Illinois jury found that Johnson & Johnson isn’t responsible for the cancer that killed a woman whose family blamed the illness on the company’s talc-based powders.
Read more

A surge in Millennial candidates could make the Senate a whole lot younger after the 2022 midterm elections.
Read more

Our Gdańsk moment may not be in shipyards but below the skies. Now is the chance for the right to stand with American workers. The post Take-Off Time for Solidarity appeared first on The American Conservative.
Read more

The Memo: ‘Hillbilly Elegy’ author binds himself to Trump...

J.D. Vance, the best-selling author, was once a stern critic of former President Trump.Now, as a candidate for the Republican Senate nomination in Ohio, he is a big Trump fan....
Read more

The mayor of St. Louis addressed gunshots that rang out during a Friday press conference on safety she held with the mayor of Kansas City, Missouri, this week.
Read more

New England Patriots head coach Bill Belichick clarified comments he made about COVID-19n vaccines, stating that no players have been released because of their vaccinations status.The remarks com...
Read more

Overseas workers only way to solve shortages, says Next...

Next boss Lord Wolfson says hiring overseas workers under a visa tax scheme is the solution to shortages.
Read more

The Sudanese Ministry of Culture and Information said that the joint military forces had placed Abdalla Hamdok under house arrest.
Read more

Bose could trounce the Sonos Arc with its new...

The Sonos Arc is a formidable Dolby Atmos soundbar, but the Bose Smart Soundbar 900 is going even bigger on spatial audio.
Read more

Adams: Not fair to call me an anti-woke Democrat

New York City mayoral candidate Eric Adams (D) said on Sunday that it is not fair for people to call him an "anti-woke Democrat." During an appearance on ABC's "This Week," Adams...
Read more

Signs of inflation are picking up, with a mounting number of consumer-facing companies warning in recent days that supply shortages and logistical logjams may force them to raise prices.
Read more

The Samsung Galaxy Buds 2 are rumored to be launching in August.
Read more

Alaska residents don’t know how much money they might get from the state’s oil wealth this year, or even when they might get the unique payout just for living in the oil-dependent state
Read more

US astronaut launching next month may spend year in space