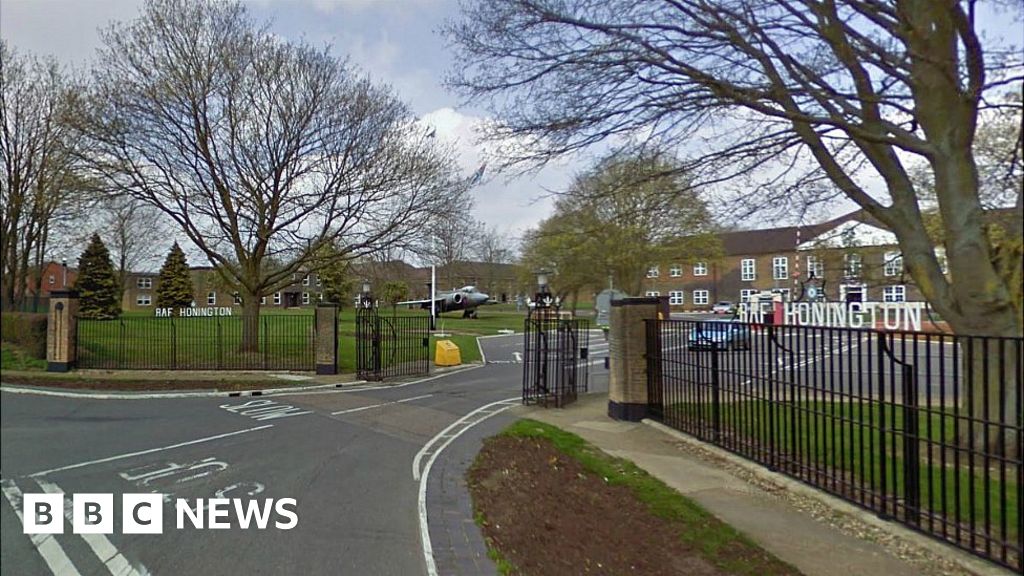 image captionThe RAF Regiment is based at RAF Honington, Suffolk

A unit within the RAF Regiment has been disbanded while sexual abuse allegations are investigated.

It is understood the allegations relate to an airman appearing to be sexually assaulted with a piece of mortar equipment.

Defence Secretary Ben Wallace told MPs at the Commons he was “appalled” by reports of the incident.

The unit involved was the Support Weapons Flight based at RAF Honington in Suffolk, said Mr Wallace.

It has been temporarily disbanded pending the outcome of an investigation, which was expected to be carried out swiftly, the RAF said.

Mr Wallace said: “The RAF police are investigating the incident and the victims have been offered our full support.

“The Chief of the Air Staff and I had a discussion about the incident over the weekend and he has, with my support, acted quickly.

“He has removed officers from the immediate chain of command without prejudice pending the findings of a police investigation and the unit involved, the Support Weapons Flight, will be disbanded with immediate effect.

“Bullying, harassment and discrimination has no place in our armed forces, and neither I nor the Chief of the Air Staff tolerate it.” Their own words may have doomed men who killed Ahmaud Arbery

The Justice Department has charged the former top adviser to Trump for refusing to provide documents and testimony to investigators probing the Capitol attack.
Read more

The US president highlights the rights abuses and the possibility of famine as fighting continues.
Read more

The money is being allocated for ongoing costs and tackling waiting times.
Read more

Who’s Really in Charge of OnlyFans?

Taylor Swift Thanks The Real-Life James, Inez, And Betty...

Taylor Swift's 'Folklore' took the one of the night's top honors at the 2021 Grammys. In her acceptance speech, she thanked Joe Alwyn, along with the real-life Betty, James, and Inez (and their parents).
Read more

Secretary of State Antony Blinken called completion of the Nord Stream 2 pipeline from Russia to Germany a “fait accompli” and said the U.S. is now working with Germany to mitigate the damage it will cause to Europe’s energy system.
Read more

Dozens of rescue units are at the scene, with no immediate reports of people injured or trapped.
Read more

How Brian Kemp survived his near-death experience with Trump

The Georgia governor shows there may be hope for Republicans who have incurred Trump’s public wrath.
Read more

Dollar firm ahead of payrolls; kiwi shrugs off rate...

The dollar inched higher in choppy trade on Wednesday amid heightened nerves about the global growth outlook and as traders awaited U.S. jobs data for a clue on the timing of Federal Reserve policy tightening.
Read more

This Smart Grill Makes Cooking With Charcoal Easier Than...

The Spark One is expensive and uses proprietary fuel, but it's as easy to use as propane.
Read more

Covid in Wales: Vaccines for care home workers not...

The first minister says the vaccine is voluntary, but some care homes make it a condition for a job.
Read more

US Senate votes to make Juneteenth a holiday

The implosion of the Pontiac Silverdome, the former home of the Detroit Lions, didn't go as planned Sunday morning
Read more

Oregon wildfire blazes ahead against army of firefighters –...

Fed by bone dry timbers, a massive wildfire dubbed the Bootleg blaze raged across an Oregon forest, advancing five miles (8 km) a day against an army of firefighters as it scorched another 39,000 acres (15,783 hectares) on Saturday.
Read more

Biden’s next big bill could revive — or bury...

Republicans the president has reached out to hope to see a White House whose outreach goes beyond showmanship.
Read more

Sarah Everard: Women react to the danger of walking...

Women around the UK have reacted to the disappearance of Sarah Everard by sharing their stories.
Read more

What It Means to Get Tough on Putin

President Joe Biden and first lady Jill Biden used their first Easter message at the White House to urge those celebrating Easter to get a COVID-19 vaccine.
Read more

Google is testing out a new feature in Chrome for iOS that makes it harder for others to access your Incognito tabs.
Read more

Hijab campaign tweets pulled by Council of Europe after...

The Council of Europe released the posts for a campaign against anti-Muslim discrimination.
Read more

Presented by Pre-K Our Way Good Monday morning! At an event Friday, Gov. Phil Murphy ensured that the mask debate will go on. Despite CDC guidance...
Read more

Google Pixel 6 release date may be on October...

No, the Google Pixel 6 won’t come out right before the iPhone 13, per a new rumor – instead, it may launch on October 28.
Read more

Global wealth tripled over the last two decades, with China leading the way and overtaking the U.S. for the top spot worldwide.
Read more

SMBs are being held back by unwillingness to talk...

Many small business owners think they come off as rude if they remind clients and customers of late payments.
Read more

GE Will Split Into Three Units, Ending Conglomerate for...

Wolves manager Bruno Lage praises his side's defence for "stopping a lot of chances" but thought the late penalty and subsequent goal his side conceded was "soft", in their 1-1 draw at Leeds.
Read more

The D.C. Police Reform Commission released a 259-page report with dozens of recommendations on Thursday, including educing the size of the city's police department (MPD). The group recommended that a c...
Read more

Critics bash media for having elevated Rebekah Jones amid...

Emma Raducanu: Where does teenager’s win rank among British...

Whether it is sumo, or domestic basketball or baseball matches, Japanese fans have been filling the arenas in recent days leaving Olympic athletes wondering why they will be competing in front of empty stands at the Tokyo Games.
Read more

Protesters march through DC, clash with police after shootings

Hundreds of protesters marched throughout Washington, D.C., Friday evening, with some engaging in clashes with police, calling for an end to police brutality following a series of fatal shootings and as the end of f...
Read more

Niall Ferguson: Climate Discussion Nobody Wants to Have at...

Some businesses are demanding "vaccine passports" but opposition is building over privacy and other concerns.
Read more

Parents of Lt. Col. Stuart Scheller, a marine who demanded acountability on Afghanistan, went on 'Tucker Carlson Tonight' to talk about their son's incarceration.
Read more

An Ohio man pleaded guilty on Wednesday to a conspiracy in which federal prosecutors say he laundered more than $300 million of Bitcoins generated through drug trafficking and other illicit activities.
Read more

State Dept accuses US envoy to Haiti of ‘mischaracterizing’...

The State Department on Thursday forcefully disputed the U.S. special envoy to Haiti's assertion that his policy recommendations were ignored, after the official resigned over what he described as the Biden administration...
Read more

Swedish health officials warned on Friday of worrying local outbreaks of the COVID delta variant and urged people to get vaccinated to avoid a fourth wave of the pandemic.
Read more

Masks are back at Citigroup, and Bank of America workers still have to keep their distance in conference rooms. At JPMorgan, investment bankers and traders can no longer blow off steam at the nearby Monkey Bar -- the tony restaurant in midtown Manhattan that …
Read more

The House Appropriations Committee advanced a bill for Department of Homeland Security funding Tuesday that would allocate millions toward technologies for surveilling immigrants.The proposal, passed through the De...
Read more

Ohio police on Wednesday released body camera footage appearing to show officers engaged in a physical struggle with a man in a hospital emergency room that ultimately resulted in officers fatally shooting him....
Read more

A Hong Kong democracy group voted to disband after several of the members were charged with a violation of a new national security law. The Hong Kong Alliance in Support of Patriotic...
Read more

Indian Prime Minister Narendra Modi said the country had lost a "colossal sportsperson" following the death of Milkha Singh, one of its most famous Olympians, at the age of 91 on Friday.
Read more

Halo Infinite is getting another multiplayer preview on September 24. Here’s what you need to do so you don’t miss out.
Read more

Hurricane Nora Forms; on Track to Skirt Along Mexico’s...

Mexico City (AP) -- Hurricane Nora formed early Saturday in the eastern Pacific on a forecast track that would bring it near the...
Read more

ByteDance Said to Have Met With Officials (Audio)

Is Bulb going bust? Green energy supplier could be...

Green energy supplier Bulb goes into special administration in the UK in the face of rocketing energy prices.
Read more

Activists say more than 80 people were killed in the city of Bago in protests against the military coup.
Read more

Mapletree Investments Pte, a property developer and manager, is exploring listing a student housing real estate investment trust in Singapore that could raise about $1 billion, according to people familiar with the matter.
Read more

Jeffrey Clark played a key part in the former president's bid to overturn his loss to Joe Biden.
Read more

The 12 jurors deliberating in the trial of Derek...

The jury deliberating in the trial of the former Minneapolis police officer accused in George Floyd's death includes a chemist, a nurse, an auditor and a grandmother
Read more

Fury Stops Wilder in 11th in Another Heavyweight Thriller

CEO Urges Chile Not to Single Out Mining in...

An ISIS defector has unloaded the equivalent of job applications for members of the terrorist organization to Britain's Sky News. Intelligence agencies are now going through the documents and are calling this a major intelligence coup. David Martin has more.
Read more

The Apple Watch 6 plummets to record-low price ahead...

A federal judge has dismissed antitrust lawsuits brought against Facebook by the Federal Trade Commission and a coalition of state attorneys general, dealing a significant blow to attempts by regulators to rein in tech giants
Read more

Covid: New WHO group may be last chance to...

The World Health Organization unveils a new group to examine the emergence of the virus more closely.
Read more

Inside the pervasive pimp culture in Milwaukee

Milwaukee is a hotbed for sex trafficking with pimps often gathering to discuss tactics and passing along the trade to their sons. CBS News correspondent Marlie Hall joins CBSN with details.
Read more

Hamas leader thanks Iran for supplying weapons to Gaza

The head of the Palestinian resistance movement thanked Iran for supplying military support and financial backing during the recent conflict with Israel in a televised address Friday.
Read more

Aaron Rodgers says he is unvaccinated and takes ivermectin

Rodgers, 37, lashed out at the media, the NFL's rules on COVID-19 testing and said he consulted with podcaster Joe Rogan for alternatives to the vaccine.
Read more

South Sudan's President Salva Kiir has sacked his finance minister and his interior minister, without giving reasons for the changes, state television and his press secretary said late on Friday.
Read more

The government says consumers and businesses will benefit from deal, but it is unlikely to boost growth.
Read more