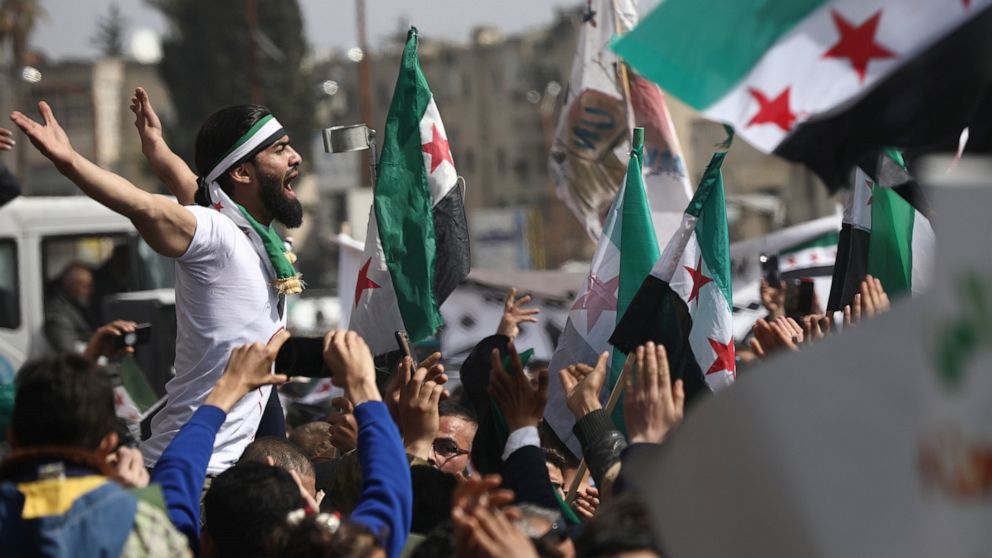 BEIRUT — Thousands of Syrians in the last opposition-held area of the country protested Monday, marking 10 years since the start of a popular uprising against President Bashar Assad’s rule that later spiraled into an insurgency and civil war.

The protest in Idlib city was the largest in years, and aimed at recreating the early days of peaceful protests in which tens of thousands called for Assad’s downfall. However, Syrian rebels have been crushed in most of the country and no longer pose a military threat to Assad. His troops, backed by Russia and Iran, have vanquished opposition-held territory over the past few years.

The city of Idlib is the last urban area still under opposition control in Syria, located in a shrinking rebel enclave in the northwestern province of the same name.

A decade of global abandonment, read one of the banners carried by protesters.

The Syrian conflict has killed more than half a million people and displaced half the countrys pre-war population of 23 million. Those displaced include more than 5 million refugees, mostly in neighboring countries.

In Idlibs Sabaa Bahrat square, more than 2,000 people gathered to mark the anniversary almost none of them wearing masks to protect against coronavirus with some chanting no retreat, no surrender.

Injustice will eventually come to an end and righteousness will be victorious, said citizen journalist Salwa Abdul-Raham, who is based in Idlib and took part in the protest.

Those who lost their children or lost their lives, their blood will not be in vain, she said. There is divine justice and victory will be achieved to bring freedom and justice.

Protests also took place in other rebel-held parts of Syria, including western districts of Aleppo province where demonstrators carried posters reading: At the end of the decade, we renew the pledge.

Also on Monday, Syrian security forces thwarted an attack in the capital Damascus killing thee militants and detaining three others, state TV reported. The TV said three of the attackers had explosive belts, an apparent reference to suicide attacks. Nokia (NOKIA.HE) said on Tuesday it expects to raise its full-year outlook as business picked up pace in the second quarter.
Read more

Rob Needham is thought to have killed partner Kelly Fitzgibbons and their daughters, then himself.
Read more

The Right and Left Are Both Wrong on Immigration....

Getting immigration right is critical to our continued predominance. Great societies are by nature expansive.
Read more

ABBA back after 40 years with new album, virtual...

ABBA is releasing its first new music in four decades, along with a concert performance that will see the “Dancing Queen” quartet going entirely digital
Read more

Booze and Cigarettes, the Sunny Uplands: Beyond Brexit

Business executives in Japan are starting to voice concerns over what they see as an unacceptably slow vaccine rollout in one of the world’s richest countries, a rare chorus of warnings over increasing risks to any economic recovery.
Read more

'Hannity' host Sean Hannity argues that the Biden administration doesn't seem to care that they're to blame for Americans still being stranded in Afghanistan.
Read more

Many large social media firms have been accused of not doing enough to fight the spread of disinformation.
Read more

Nearly 1.9 million people took to the skies Saturday and more are expected now that the European Union's 15-month ban on U.S. travel is over. But the contagious Delta variant of COVID-19 is still spreading. Lilia Luciano has more.
Read more

Chicago is seeing some positive results after recent years of record gun violence. The city's police superintendent reports that the city is set to have the lowest homicide rate since 1965. CBS News correspondent Adriana Diaz reports.
Read more

Zverev follows up win over Djokovic with Olympic gold

Alexander Zverev followed up his comeback win over Novak Djokovic by winning the gold medal in men’s tennis at the Tokyo Olympics.
Read more

A federal judge found that the policy doesn’t authorize the expulsion — and, in turn, doesn’t allow for those removed to be denied the opportunity to seek asylum.
Read more

The homicide level in Washington, D.C., reached its highest threshold since 2004 on Monday after the 200th homicide this year was recorded.A man was fatally shot Monday evening in Southeast Washi...
Read more

Barratt Developments (BDEV.L) said on Wednesday forward sales for the past three months had risen above pre-pandemic levels, boosted by strong reservations for private homes, prompting the…
Read more

Researchers built a miniature version of the crustacean to better understand the biomechanics of its legendary strike.
Read more

The slate structures have been spotted in the Lake District by seasoned climbers and walkers.
Read more

A gang member on parole for attempted murder was identified Friday in connection with a brazen shooting against a rival on a New York City sidewalk while narrowly missing two young siblings as he unleashed a hail of gunfire.
Read more

Ben Raymond, 31, is charged with remaining a member of National Action after it was outlawed.
Read more

Moto G30 launches in the UAE

Boeing Co. is scrutinizing the flight-deck windows of some of its 787 Dreamliners as the beleaguered planemaker expands its search for potential manufacturing flaws that have delayed deliveries of its marquee jetliner, according to people briefed on the matte…
Read more

A car crash leaves a young Iraq veteran dead, but her boyfriend alive. The crash didn't kill her, what did? Susan Spencer reports.
Read more

Carl Nassib’s NFL jersey a top seller after he...

Las Vegas Raider's No. 94 shirt is No. 1 after defensive end makes history as first openly gay active player in the NFL.
Read more

There are fears the fires that have hit rosé vineyards in Provence will push up prices.
Read more

Police hunt for passengers who fled plane after emergency...

Spanish authorities have arrested 12 people who were part of a group of 21 passengers that fled a plane after it was forced to make an emergency landing at Palma airport on the Balearic island of Mallorca, Spain, state news agency EFE reports.
Read more

House Speaker Nancy Pelosi (D-Calif.) said she is “deeply concerned” over allegations that an aid worker currently held in Saudi Arabia was being tortured, ahead of an appeal hearing in his criminal case set for Monday. “Deeply concerned...
Read more

Anyone aged from 18 to 35 would be offered the money to help them leave their parents' home to rent.
Read more

It’s a question occupying the minds of employees who have worked from home the past year: Will they still be allowed to work remotely — at least some days — once the pandemic has faded
Read more

Four months into her time as vice president, Kamala Harris is still finding her footing in the role. Harris is seen as a major reason why President Biden won the White House, and she’s considered an heir apparent for the Democratic nomination...
Read more

Celebrity birthdays for the week of Oct. 3-9

Why Apple Arcade is perfect for follow-ups to No...

Apple Arcade has expanded its lineup with follow-ups to No Man's Sky and Oxenfree which sheds light on which games make the cut to be added to the family-friendly service.
Read more

Tugboats will continue to try to dislodge the Ever Given from the canal on Sunday.
Read more

When asked about the filibuster issue's absence from the speech, the president appeared to sidestep the issue, answering only "I'm not filibustering now."
Read more

California's largest wildfire has destroyed multiple buildings and is threatening thousands more as the battle against the blaze stretched into its 12th day. Low moisture in vegetation and limited access in the remote area have hampered firefighters, official…
Read more

How a Rural Arkansas County Became a Vaccine Success...

Demographics alone would suggest Bradley County should be struggling fiercely with local resistance against vaccines. But that’s not what happened.
Read more

343 Industries is gearing up for its first round of Halo Infinite technical previews.
Read more

Fitbit deal: save $61 off the stress-busting Fitbit Sense

In just hours, on Monday, July 19, we’re celebrating the first-ever DOLE Whip Day here on the Disney Parks Blog. And to mark the day, our authors are swirling up a sweet serving of super-refreshing stories featuring this fan favorite for everyone to enjoy!
Read more

This week and beyond, though, he will continue to push for the far larger social-spending bill.
Read more

The first minister calls on climate activists not to worsen disruption for residents of Scotland's biggest city which is hosting COP26.
Read more

Your Tomatoes May Cost More as Gas Prices Hit...

Skyrocketing power prices are forcing the vast network of Dutch glasshouses -- the continents biggest -- to go dark or scale back, threatening...
Read more

Users warned against upgrading to Ubuntu 21.04

Merck to Buy Acceleron Pharma in Deal Valued at...

Merck & Co. agreed to buy Acceleron Pharma Inc. in a deal valuing the drugmaker at $11.5 billion, building out its portfolio of therapies to treat cancer and rare diseases.
Read more

The next PS5 restock date at Best Buy, Walmart and GameStop could be this week, though your best chance to buy the console may be at Target.
Read more

Chelsea winger Charly Musonda tells Football Focus he "feels like a fighter" having spent the past three years recovering from injury.
Read more

Tiny Vases Can Have an Outsize Effect on a...

NFL not planning to issue report on Washington Football...

Roger Goodell said the league wanted to protect the roughly 150 former employees who spoke to outside counsel.
Read more

Valheim went live on Steam exactly five weeks ago, and it’s been on fire ever since. Iron Gate’s Viking survival sim rocketed up the charts, hitting 5 million copies sold after just one month in Early Access and surpassing huge titles like Dota 2 in terms of …
Read more

Afghanistan: Number of people eligible to come to UK...

Dominic Raab believes the majority of eligible people have been evacuated to the UK - but cannot be precise.
Read more

CNN continues hammering Biden over Afghan turmoil: ‘If this...

The legal wrangle has dragged on for seven years, since Russia annexed the peninsula from Ukraine.
Read more

Virgin Atlantic Airways Ltd. is searching for a candidate to take over as chairman in the event plans for an initial public offering...
Read more

Afghanistan: Who originally supported Trump’s deal with the Taliban?

UK Defence Secretary Ben Wallace now calls it a "rotten" deal but supported it at the time.
Read more

Poland's Robert Lewandowski scores a fantastic breakaway goal to get Poland back in it in their must-win group E Euro 2020 match with Sweden in St Petersburg.
Read more

The former Columbus police officer who shot and killed Andre Hill wants the trial moved, saying publicity has made it impossible for a fair proceeding locally
Read more

Trump’s Lawyers Only Cite Reuters Article as Proof He...

The Happiest Place on Earth (Podcast)