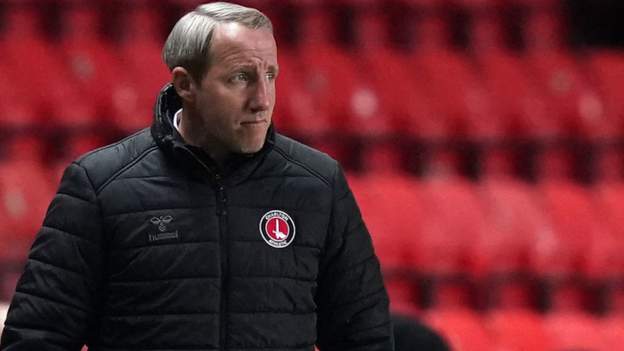 Charlton Athletic manager Lee Bowyer has resigned after nearly three years in charge at the League One club.

Former Addicks midfielder Bowyer, 44, was initially put in caretaker charge in March 2018 before being appointed permanently in September the same year.

He departs with more than two years left on his contract having agreed a deal until summer 2023 in January 2020.

Charlton are eighth in League One, two points off the play-off places with 11 games remaining this season.

Covid in Wales: Calls to respect beauty spots as...

"The last thing we need is the Neanderthal thinking that in the meantime everything's fine, take off your mask, forget it," Biden said after Texas declared in March it would reopen at 100 percent.
Read more

A federal judge quickly denied a late-night effort from former President Trump on Monday to temporarily block the National Archives from releasing records from his administration to the House Jan. 6 select committee....
Read more

Borussia Dortmund slip to fourth in the Bundesliga with defeat at Borussia Monchengladbach after playing 50 minutes with 10 men.
Read more

Supply Lines is a daily newsletter that tracks trade and supply chains disrupted by the pandemic. Sign up here. Ship congestion outside the busiest U.S....
Read more

An estimated 200 businesses that were part of Black Wall Street were destroyed during the two-day rampage in 1921.
Read more

The bronze statue to honour a 19th Century poem is called "offensive" and "humiliating" to women.
Read more

A goal in each half from Scott Hogan and Jeremie Bela help Birmingham City to a comfortable win over Derby County.
Read more

Gloria Estefan says US should get involved in Cuba

Cuban-born pop singer Gloria Estefan called on the U.S. and the United Nations to take action against the Cuban government following recent protests in the country."My heart hurts for the Cuban p...
Read more

President Biden is expected to attend a House Democratic caucus meeting on Thursday morning before he departs for Europe to attend a pair of global summits, in a last-minute attempt to push through the multi-billion dolla...
Read more

Lawyer: Brian Laundrie fatally shot himself in the head

Fifty sustainable sewage treatment plants have been built that work in similar way to a cow's stomach.
Read more

His Wife Died of Cancer. His Parents of Covid....

Surfside, Florida (AP) -- On a recent morning before communal prayers at a synagogue, Harry Rosenberg told a friend that his new beachfront condo in Florida offered a much-needed change of scenery after an awful year in which he lost his wife to cancer and bo…
Read more

The Hundred: White cards held up by umpires explained

What are the white cards held up by umpires in The Hundred all about? BBC Sport explains...
Read more

A Look Ahead To The FOMC (Radio)

The sounds of song will be ringing out from Central Park, with thousands expected for a superstar-laden concert meant to celebrate New York City’s recovery from the coronavirus
Read more

Oculus Rift S improves on its predecessor in some key aspects, but is a step backwards in others.
Read more

How, when and who will benefit from changes to quarantine rules will be detailed in the Commons later.
Read more

Rep. Adam Smith pushes back against private funding for...

The chair of the House Armed Services Committee criticized the move by South Dakota Gov. Kristi Noem and said the Guard shouldn’t be treated like a “private militia.”
Read more

Canadian Solar Inc. warned that all panel imports from China risk being detained by U.S. Customs as the Biden administration cracks down on alleged labor abuses in the Xinjiang region.
Read more

Biden urges public to get vaccinated after acknowledging 700K...

President Biden urged the public to get vaccinated on Saturday in a statement acknowledging the United States has surpassed 700,000 deaths related to COVID-19."To heal we must remember, and as our nation mourns the...
Read more

How to Use America’s New Peace Dividend

Redirecting money from Afghanistan would be a clear message from Congress that it is time to rebalance and focus on strengthening America. The post How to Use America’s New Peace Dividend appeared first on The American Conservative.
Read more

Asteroid the size of the Golden Gate Bridge to...

The largest and fastest asteroid to pass by Earth this year is nearly here.
Read more

US climate envoy in Japan to discuss effort to...

U.S. climate envoy John Kerry is in Tokyo to discuss efforts to fight climate change with top Japanese officials ahead of a United Nations conference in November
Read more

The Papers: ‘Gunboat diplomacy’ and fears of new Covid...

The front pages focus on migrant crossings and warnings new Covid restrictions may be needed in England.
Read more

Biden nominates ambassadors to Sweden, Belgium and the Dominican...

DOJ to review 9/11 records with eye toward making...

The disclosure follows longstanding criticism from relatives of those killed that the U.S. government was withholding crucial details from them in the name of national security.
Read more

The Food and Drug Administration is preparing to clear two batches of Johnson & Johnson Covid-19 vaccines that were produced at the troubled Emergent facility in Baltimore, a source familiar with the plans told CNN.
Read more

The FBI raided Detroit City Hall and the home of two city councilors on Wednesday as part of an ongoing corruption investigation."Really, at this point...
Read more

Not remote, but mind-controlled. Defense company Ultra Electronics has unveiled a working prototype of a drone that can be operated by your mind at the Three Counties Defence and Security Expo in Malvern, U.K.
Read more

Huge crowds of Magpies fans gathered outside the club's stadium to celebrate the start of a new era.
Read more

Record-breaking temperatures were recorded in parts of Minnesota and Wisconsin, while New York was told to look forward to readings in the 90s.
Read more

DeSantis expresses his condolences to Petito family in phone...

Florida Gov. Ron DeSantis spoke with Gabby Petito's father, Joe Petito, on Wednesday afternoon to express his condolences for the loss of his daughter.
Read more

THE BALL IS ROLLINGThat is the message that Democrats are eager to convey after the frantic chaos that partially eclipsed the infrastructure victory...
Read more

The Half-Monkey Offspring of an Unworthy Elite

A recent vote on chimera experiments is a timely reminder that neither scientists nor Democrats are minimally fit to rule. The post The Half-Monkey Offspring of an Unworthy Elite appeared first on The American Conservative.
Read more

The plaque is on the Hampstead house where Muppets creator Jim Henson lived for more than a decade.
Read more

President Biden on Thursday signed an executive order branding the threat from Russia a national emergency and unleashing a flurry of sanctions that include the expulsion of at least 10 Russians from the diplomatic mission in Washington. CBS News intelligence…
Read more

Newsom’s team emphasized party unity and warned that another Democratic candidate could help the recall succeed by fracturing the liberal electorate.
Read more

PwC to Manage Affairs of Bridging Finance Amid Investigation

An Ontario court has appointed PricewaterhouseCoopers to manage the affairs of Bridging Finance Inc., one of Canadas largest private lenders, pending a regulatory...
Read more

Facebook is no stranger to the limelight. While the company has repeatedly come under fire over the past few years for its role in disseminating misinformation, especially related to the 2016 election, the last two months have been especially turbulent as a w…
Read more

Relief Was Fleeting in Minneapolis After Chauvin Murder Verdict

A community that braced for the worst asks: What’s next?
Read more

A ‘monster’: Woman who killed veterans at VA hospital...

The Lord apparently scooped up a signed Helmut Newton print on Wednesday, dropping more than $57,000 on the lavish gift for his model girlfriend, according to a new report.
Read more

Our Xiaomi Mi 11 Ultra review explains why it might just be the best Android smartphone in India for many users.
Read more

Google readying Pixel Buds A – but is it...

Widespread testing is a good thing, but now it’s coming at a cost: A lack of data for public-health officials
Read more

Six Charts Show Hard It Is for India to...

Trump says he’ll meet with Cheney challengers ahead of...

Former President Donald Trump will meet with Rep. Liz Cheney's (R-Wyo.) primary challengers are his New Jersey golf club next week as he looks to make an endorsement in the race to oust one of his most prominent Republica...
Read more

Taliban say woman can study at university but classes...

Women in Afghanistan will be allowed to study in universities as the country seeks to rebuild after decades of war but gender-segregation and Islamic dress code will be mandatory, the Taliban's new Higher Education minister said on Sunday.
Read more

Sen. Joe Manchin (D-W.Va.) on Thursday decried what he called a "hostile working environment" in Washington, citing fierce partisanship among lawmakers on Capitol Hill.Manchin, during an appearance on...
Read more

The Pentagon has upped the amount of entrees, sides and desserts distributed to troops on Thanksgiving this year by nearly 50 percent as in-person dining largely returns after being nixed in 2020 thanks to COVI...
Read more

US immigration policies toward Haitians have long been racist,...

The recent treatment of Haitian migrants only reinforces what some advocates say they have long known: Haitians fare differently under the US immigration system than migrants who aren't Black.
Read more

Tropical Cyclone Shaheen bore down on Oman on Sunday, prompting authorities to delay flights to and from the capital, Muscat, and to urge residents to evacuate coastal areas.
Read more

Biden Border Czar Says: The Border Is Not Open