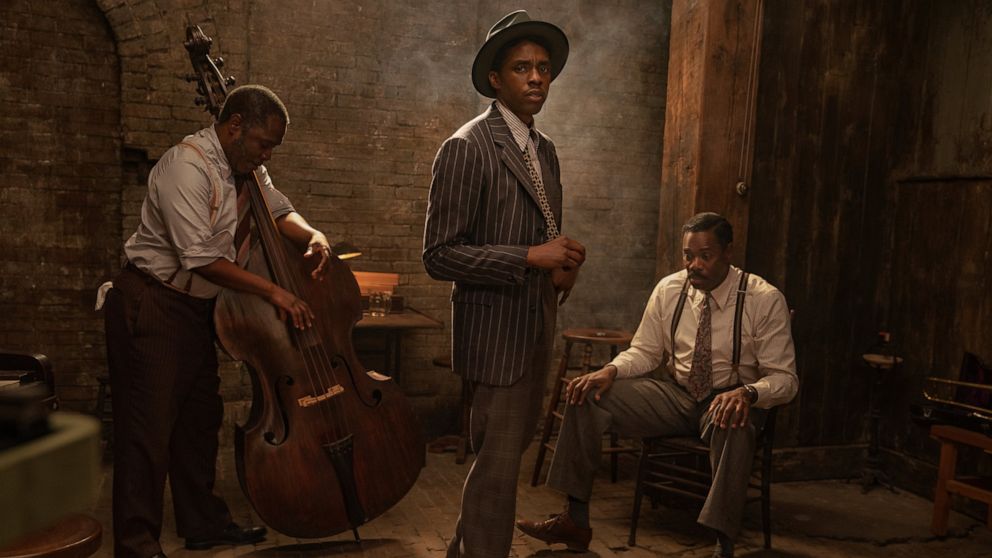 NEW YORK — Half a year after his death, Chadwick Boseman was posthumously nominated for an Academy Award on Monday for his final performance in Ma Rainey’s Black Bottom.

The nomination for best actor was widely expected but still historic. Boseman is the first Black performer ever nominated posthumously for an Oscar. He was nominated alongside Steven Yeun (“Minari”), Riz Ahmed (“Sound of Metal”), Anthony Hopkins (“The Father”) and Gary Oldman (“Mank”).

Many predict Boseman will also win for a performance that’s been called the best of his life. Last month, he also won the Golden Globe for best actor in a drama. Bosemans widow, Taylor Simone Ledward, accepted the award on his behalf.

Boseman also performed in Spike Lee’s Da 5 Bloods as a U.S. soldier in the Vietnam War a performance that has also found awards attention. Boseman was nominated posthumously by the Screen Actors Guild Awards for his performances in both Ma Rainey’s Black Bottom and his supporting turn in Da 5 Bloods.

After his death, none of Boseman’s collaborators on either film said they knew he was ailing. He was diagnosed with Stage 3 colon cancer in 2016. President Biden's pick for the number three position at the Department of Justice apologized on Tuesday for her past "harsh rhetoric" as she faced an icy reception from Senate Republicans over her civil rights legal work...
Read more

A government watchdog agency determined 13 senior Trump administration officials violated federal law by campaigning for former President Trump in the lead up to the 2020 election, according to ...
Read more

How some Republican lawmakers are fighting conservatives’ COVID-19 vaccine...

Republicans' hesitancy towards the COVID-19 vaccine could impact when the country reaches herd immunity.
Read more

Maher torches Biden’s Afghan withdrawal: ‘The adults are back...

Official: More than 90% of fed workers got shots...

Amid a nationwide GOP push to ban critical race theory – a controversial academic framework that examines systematic racism in the U.S. – Minnesota Democrat Rep. Ilhan Omar denied Saturday that the doctrine is even being taught in public schools.
Read more

Popovich: ‘Patty gave us that energy, he played great...

State of emergency declared in Maryland as snowstorm approaches

Massachusetts Gov. Charlie Baker (R) said Monday there were a "few hundred" state employees who faced consequences over violating the coronavirus vaccine mandate."The number of suspensions that a...
Read more

Joe Biden's approval numbers are stunning, with 63% of Americans saying in a new poll that they approve of the job he's doing, writes Jill Filipovic. The President draws this while not making any big rhetorical waves but carefully guiding a progressive policy…
Read more

"Failure to replace the waterproofing in the near future will cause the extent of the concrete deterioration to expand exponentially," warned a 2018 engineering report of the condominium building.
Read more

Argentina qualify for the 2022 World Cup finals in Qatar after a goalless draw at home against Brazil and results elsewhere secures their spot.
Read more

A Change In Stocks, Bonds, And Forecasts: Macro Man...

On The Money — Democrats rush to finish off...

As Nigeria tries to meet an ambitious goal of fully vaccinating 55 million of its 206 million people in the next two months, health care workers in some parts of the country risk their lives to reach the rural population
Read more

The FDA is not yet taking a definitive stance on whether or not booster shots are needed to help protect people from coronavirus infections. A key advisory committee is set to meet to discuss authorizing an extra dose of Pfizer's vaccine in the coming days. C…
Read more

The former president's pick of Harriet Hageman pushed candidates and hopefuls out of the race, as anti-Cheney forces seek a one-on-one battle.
Read more

Seth Rogen weighed in on his Twitter feud with Texas Sen. Ted Cruz during an appearance on 'The Late Show with Stephen Colbert.'
Read more

With concern about climate change growing, this holiday season is a chance to try celebrating in more planet-friendly ways
Read more

The following is a transcript of an interview with Dr. Vivek Murthy, U.S. Surgeon General, that aired on Sunday, December 5, 2021, on "Face the Nation."
Read more

The parent company of the National Enquirer has reached a settlement with the Federal Election Commission (FEC) for breaking a campaign finance law over its payment of ex-model Karen McDougal, who claimed to have ha...
Read more

Biden must show how he arrives at his greenhouse...

Streets are flooded and train lines blocked as the Italian island of Sicily is hit again by storms.
Read more

The results from a preliminary study are an early sign that booster shots could play a role in future vaccination efforts.
Read more

Amazon begins rollout of pay-by-palm at Whole Foods near...

Tyler Mahle tied his career high with 12 strikeouts, Tucker Barnhart drove in the go-ahead run with a double in the seventh inning, and the Cincinnati Reds beat the Milwaukee Brewers 2-1 on Wednesday to finish a three-game sweep.
Read more

Ozy Media announced on Friday that it was shutting down amid a scandal surrounding a top executive attempting to deceive potential investors.In a statement obtained by ...
Read more

Newsom turns to avalanche of bills

AstraZeneca insisted Wednesday that its COVID-19 vaccine is strongly effective even after counting additional illnesses in its disputed U.S. study, the latest in an extraordinary public rift with American officials
Read more

Cuts not to blame for failures in rape prosecutions...

The PM appears to contradict his justice secretary, as he vows to improve prosecution rates.
Read more

This week on “Sunday Morning” (November 28)

Apple Music is giving Spotify a run for its money, with support for hi-res audio at no extra cost to users.
Read more

Target’s bold holiday move is a win for us...

Kara Alaimo writes that Target's announcement to close its stores on Thanksgiving sends a powerful message about the company's values at a time when Americans are rethinking our approaches to work. And, whether customers realize it or not, this benefits them,…
Read more

Léa Seydoux, one of France’s most famous actors, is at risk of missing the Cannes Film Festival after testing positive for COVID-19
Read more

Japan to start releasing Fukushima water to sea in...

These Afghans are now in U.S. custody both in the U.S. and in facilities abroad.
Read more

The stroke came suddenly. He didn’t remember falling, but the bump seen later on his head was evidence of his collapse. His wife was two hours away, so he was home alone and vulnerable.
Read more

A transgender rights advocate who started a pageant for transgender women in New England was found dead in her Massachusetts home Friday. Police say Christa Leigh Steele-Knudslien was stabbed and beaten to death by her husband. Mary Cate Mannion reports for C…
Read more

The Afghan foreign ministry announced on Sunday that it pulled its ambassador and diplomats from Islamabad after the ambassador’s daughter was kidnapped.Reuters reported that unidentified assailants on Friday captured and detained Silsila Alikhil,...
Read more

The prank video star has apologised for his involvement in an allegation of sexual assault.
Read more

On Fox Across America with Jimmy Failla, Arizona Attorney General Mark Brnovich explained all the ways the Biden administration have overwhelmed the immigration system, from the amount of drugs coming into the country to the record numbers coming into the cou…
Read more

On November 6, cast members at Hong Kong Disneyland welcomed many of Hong Kong’s winning medalists from the Tokyo 2020 Olympic and Paralympic Games, as well as the 14th National Games and the 11th National Games for Persons with Disabilities of China, along w…
Read more

Mexico is facing immigration pressures from the north, south and within its own borders, putting it in an increasingly difficult position
Read more

Israel’s Health Ministry has restricted travel to and from Argentina and Russia because of coronavirus surges there.
Read more

Marcus Rashford: England striker ‘won’t apologise’ for who he...

England and Manchester United forward Marcus Rashford says he "will never apologise for who I am" after receiving racist abuse following England's Euro 2020 final loss to Italy.
Read more

Cybersecurity creators have a TikTok problem

The State Department appears to have been hit by a cyberattack — Incoming: Results from Arizona’s partisan election ‘audit’
Read more

Supreme Court will consider taking up major challenge to...

The Supreme Court will soon consider taking up a challenge to Harvard's use of racial criteria in its admissions process, which could tee up a landmark showdown over affirmative action in higher education.The justi...
Read more

After humble beginnings as a pushcart operation by an Oregon town's railroad tracks, Dutch Bros Coffee has launched an initial public offering on the New York Stock Exchange
Read more

President Joe Biden said in an interview with ABC News on Wednesday that Russia would pay for alleged interference in U.S. elections. His comments, recorded Tuesday, came the same day as an intelligence community report on operations ordered by Putin to hurt …
Read more

Australia’s consumer watchdog finds the NBN is the best it’s ever been, but some connections are better than others.
Read more

Murkowski: Trump has ‘threatened to do a lot’ to...

Sen. Lisa Murkowski (R-Alaska) acknowledged the ways in which her opposition to former President Trump during his tenure as president could impact the 2022 Alaska midterms. During an interview th...
Read more

The first evacuees from Kabul have arrived in Germany after a tumultuous week in which the international community has dealt with the fallout of the U.S. military's exit from Afghanistan and the Taliban's takeover there.
Read more

Elk wandering Colorado for two years with tyre around...

Wildlife officers in the US state of Colorado say the elk is in good shape after removing its antlers.
Read more

SASE 101: The threat-aware network for the cloud era

SASE represents a major change in the way the network and security stack are architected.
Read more

Individuals could receive between £75 and £100 to spend on high streets in towns and cities in NI.
Read more

Dragons fail in their bid for a possible Heineken Champions Cup place despite beating Edinburgh 24-17 in their final Pro14 game.
Read more

Since entering the NFL in 2016, linebacker Jaylon Smith has worn the No. 54 while anchoring the heart of the Dallas Cowboys defense.
Read more

NASA is planning to unveil a new laser communications system next month that will allow data to be transmitted between Earth and space at an accelerated rate.
Read more

Paula Stone Williams recalls losing everything after transitioning from living as a White evangelical man to living as a woman. Noting that her former privilege helped her have a stronger foundation for a new life, and that research shows a majority of Americ…
Read more
BBC Sounds Audio Lab - Amplifying next-generation podcast creatives.
Read more

Arsenal have banned a season-ticket holder who incited violence towards midfielder Granit Xhaka and abused a Tottenham player on social media.
Read more