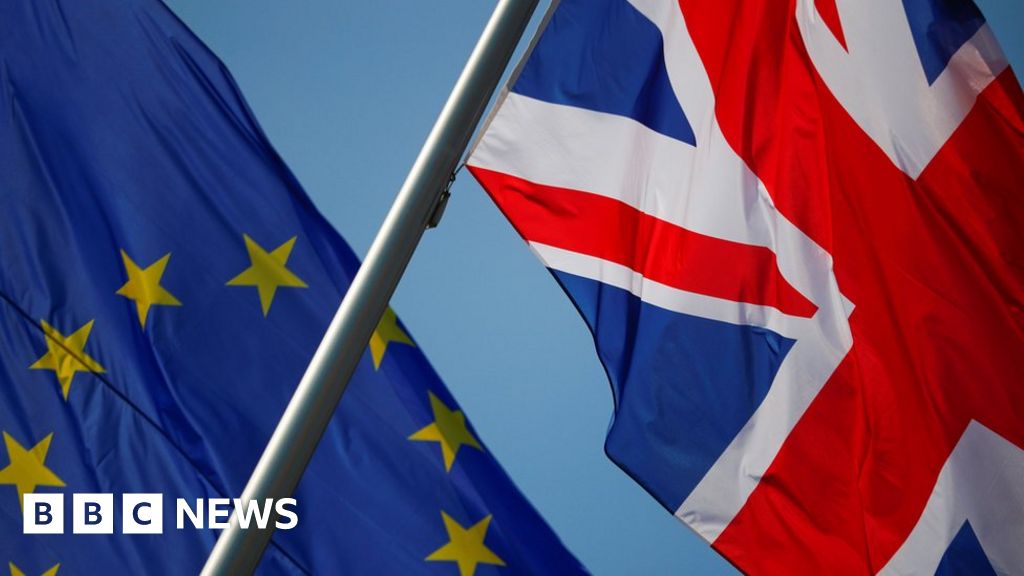 Legal action will begin on Monday over the UK’s alleged breach of the NI Protocol, an EU source has confirmed.

A letter is to be issued laying out the grounds on which the EU believes a breach has taken place.

A second “political” letter will be aimed at the arbitration procedures available under the protocol.

It comes after the UK’s move to unilaterally change the implementation of the protocol, including extending grace periods for sea border checks.

The government insists that its unilateral moves did not breach the protocol.

The grace periods mean procedures and checks are not yet fully applied.

The first of these periods will expire at the end of March, but the UK has said it will be extended until October.

Northern Ireland has remained a part of the EU’s single market for goods so products arriving from GB undergo EU import procedures.

The European Union has been implementing full checks on goods sent from the UK since the start of this year.

It does that by keeping Northern Ireland in the EU single market for goods.

That has created a new trade border with Northern Ireland and the rest of the UK.

Unionists oppose the protocol, arguing that it has damaged internal trade from GB to NI and poses a risk to the future of the UK union.

But anti-Brexit parties in NI say that it must be implemented in full, and that issues should be worked out through joint UK-EU processes. Parkland massacre families to get millions from DOJ over FBI inaction

"My heart was beating so fast, and I was so flustered and my face was so red," the woman said in a video following the stressful encounter.
Read more

The burning of fossil fuels is, by far, the source of most of the greenhouse gases in the atmosphere. It’s the top reason for the climate predicament, and not something in doubt among the more than 25,000 delegates at COP26. Yet the term “fossil fuel” has nev…
Read more

The U.S. ambassador to the U.N. weighs in on Russian efforts to tamper with other countries' electoral processes.
Read more

A Cleveland man has been charged with threatening to kill House Speaker Nancy Pelosi for “committing treason” against the US, court documents show.
Read more

A newcomer to the large capacity battery market but can it make a difference?
Read more

The long-serving journalist says it is "time to move on" after "three incredible decades".
Read more

Michigan Democratic Rep. Elissa Slotkin served three tours in Iraq alongside the US military as a CIA analyst before becoming a member of Congress, so the violent insurrection at the Capitol on January 6 was unfortunately by no means the first time she had be…
Read more

The Securities and Exchange Commission is demanding additional disclosures from Chinese firms before signing off on their bids to go public.
Read more

Half a billion LinkedIn users have scraped data sold...

Seller is asking for a four-figure payment for the data, and has two million LinkedIn records as proof.
Read more

From next year, all musicians will compete for a combined best artist prize, organisers announce.
Read more

This Shark hair dryer is down to its lowest...

The Shark HyperAir IQ hair dryer has been discounted for the first time since it launched earlier this year, offering a hefty saving.
Read more

Koon How Heng on the Markets (Radio)

The daily coronavirus death toll in Russia hit another record high on Friday, according to The Associa...
Read more

The Cherokee County Sheriff’s Office in Canton, Ga., removed Capt. Jay Baker Thursday as spokesman for the Atlanta spa shooting spree case after he made controversial comments about the suspect on Wednesday, The Washington Post reports.
Read more

Amazon.com Inc. withdrew a set of staff guidelines that claimed ownership rights to video games made by employees after work hours and dictated how they could distribute them, according to a company email reviewed by Bloomberg.
Read more

Democrats take fight vs. Trump to Virginia: The Note

Democrats are flocking to Virginia in the final weeks of the gubernatorial race.
Read more

Singer Demi Lovato has announced that they are non-binary and will use the pronouns they/them. Lovato said the "revelation" followed "a lot of healing and self-reflective work." CBSN's Tanya Rivero has more.
Read more

US completes withdrawal from Afghanistan

The last US military planes left Afghanistan with troops and the remaining core diplomatic staff, the Pentagon said. Follow here for the latest news.
Read more

Guess notifying customers that it was the victim of a ransomware campaign in February 2021.
Read more

Hundreds offer to donate cars to mechanic who fixes...

"Whatever glowing feeling is inside me, it just transferred from that TV screen and went inside them," he said.
Read more

The singers who found ‘Instagram fame’ during the Covid-19...

With music venues shut due to Covid, many singers have taken to Instagram to connect with fans.
Read more

Business groups are pressuring centrist Democrats to oppose their party’s $3.5 trillion spending package that raises taxes on corporations, with the U.S. Chamber of Commerce warning it could pull endorsements for lawmakers in tough reelection...
Read more

Pope Francis on Wednesday called a report detailing decades of abuse in the French Catholic Church "a moment of shame," and called upon leaders of the Church to ensure "similar tragedies" never happen again.
Read more

Juneteenth Day is a victory, but there’s still work...

After years of advocacy, Congress has finally made Juneteenth a national holiday. But the move shouldn't substitute for real racial equity in America, organizers say.
Read more

The U.S. is commemorating the 20th anniversary of the Sept. 11 attacks, the deadliest terror strike ever on U.S. soil
Read more

Newcastle fight back to claim a draw at Brighton in the Premier League as potential new manager Eddie Howe watches on from the stands.
Read more

Amid the pandemic, though, most meetings have been virtual.
Read more

Disney Genie Service to Reimagine the Guest Experience at...

"The chance of another 9/11 just went through the roof," the South Carolina Republican senator suggested.
Read more

The RMT warned there will be no trains running anywhere in Scotland during COP26 if the strikes go ahead.
Read more

Cast and Community Members Among First Recruits in Avengers...

Cast members and invited guests from the local community were the first recruits to experience Avengers Campus at Disney California Adventure Park prior to its opening to the public on June 4.
Read more

Number of NFL players in vaccination process up to...

The number of NFL players who are in the COVID-19 vaccination process has reached 80%, with nine teams having 90% or more of their players in that category
Read more

Scott Crowe on the Markets (Radio)

When Eduardo Rey celebrated his 69th birthday with 10 family members in Uruguay’s capital, he didn’t suspect it would start a mortal race to find medical care amid a surging pandemic
Read more

Cosby accuser Andrea Constand says his release ‘made me...

Andrea Constand, one of the dozens of women who accused comedian Bill Cosby of rape, said in an interview with NBC that it felt "disgusting" to see Cosby walk free after his conviction was overturned.Speaking with...
Read more

The Xiaomi Mi 11 Lite 4G might launch in India in June. The device is available in the global market already.
Read more

The seven-day average for new daily COVID-19 infections has surpassed 100,000 in the U.S., returning to levels not seen since the winter surge
Read more

The Metropolitan Line was closed on Saturday as control room staff were pinged by the NHS app.
Read more

Anthony Fauci, the U.S.’s top infectious-disease doctor, said he’s “strongly in favor” of speeding booster shots to people with weakened immune systems, a further sign of how the delta variant is shifting the strategies for curbing the pandemic. A third of Is…
Read more

At least 8 dead in shooting at Russian university,...

A gunman opened fire at a university in the Russian city of Perm on Monday, killing at least 8 people and injuring several others, according to Russian police.
Read more

Jean Foster has been talking to young people about the consequences of carrying a knife.
Read more

The new 'Add Yours' sticker lets you share with a larger audience and start a public thread on Instagram.
Read more

Mighty Thunder produces a late surge to claim a thrilling victory in the Scottish Grand National at Ayr.
Read more

And a debt limit shouting match erupts on the Senate floor.
Read more

Afghan politicians met with representatives of the Taliban insurgents in Qatar on Saturday with each side calling for peace even as fighting escalates and uproots thousands of people.
Read more

Walmart has hired more people of color, but not...

People of color made up more than 55% of new hires at Walmart between February and July of this year, but none filled executive management roles or board of director vacancies, according to the company's website and its latest diversity, equity and inclusion …
Read more

English football has never seen so many U.S. investors, and that has fans nervous. The Premier League is widely regarded as the best in the world. It’s also a market with potentially huge returns, given its global fan base. Nevertheless, it’s still cheaper to…
Read more

Cheney and Kinzinger: The latest turncoat Republicans the media...

US climate envoy John Kerry failed to get a commitment from Delhi during his recent visit.
Read more

Washington state officials on Thursday confirmed that the first live "murder hornet" was discovered in the state this year.The sighting of the live Asian giant hornet, also known as the "murder hornet", was reporte...
Read more

Review: In ‘Tina,’ the final word from a legendary...

The remarkable arc of Tina Turner’s life has already been the stuff of a best-selling autobiography, a Hollywood biopic and a Broadway show
Read more

This was Texas' first weekend without Covid-19 limits. Here's how it went...