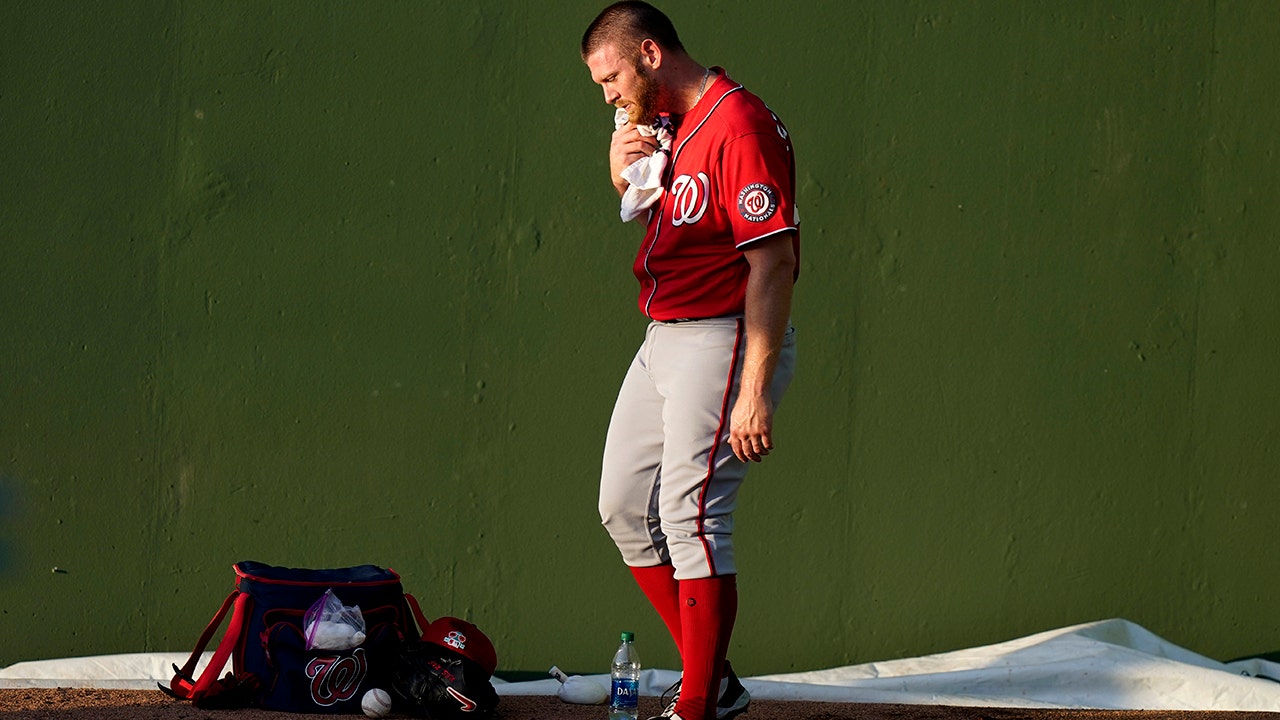 Washington Nationals pitcher Stephen Strasburg left his second spring training start in the third inning Sunday because of a problem with his left calf that he called “nothing major.”

The 2019 World Series MVP, whose 2020 season was cut to just five innings because he needed carpal tunnel surgery on his right wrist, said his calf “grabbed” as he stood on that leg at the end of his pitching motion.

“Just kind of more of a precautionary thing and just kind of take it day-to-day and see how it feels tomorrow,” said Strasburg, who allowed one hit, struck out four and walked one in 2 1/3 scoreless innings of Washington’s 5-0 loss to the Houston Astros.

“Luckily, I feel like Im a fast healer,” he said, “so I dont think it would be something that could be a prolonged absence.”

Manager Dave Martinez and trainer Paul Lessard went out to the mound to check on the right-hander before he left the game.

“There was really not much of a discussion,” Martinez said. “Just wanted to pinpoint exactly what he was feeling. Other than that, he was coming out of the game. Were in spring training. Theres no sense in pushing it.”

Strasburg said he was looked at by a team doctor and had an ultrasound exam.

He threw 45 pitches and said that before the calf became problematic, his fastball and changeup felt better than they did in his initial Grapefruit League outing five days earlier.

“I didnt really feel it at all except for that last pitch, where I kind of felt it simultaneously as I was finishing the pitch,” Strasburg said.

“My concern is just keeping him on a five-day schedule right now,” Martinez said.

“If he wakes up tomorrow sore or something, he might be held back,” the manager said. “Well see what happens tomorrow.” Vermont state Sen. Becca Balint (D) on Monday announced her candidacy for the state's U.S. House seat, becoming the second Democrat to jump into the race for Congress after Rep. Peter Welch (D) announced he would run for...
Read more

Rob Needham is thought to have killed partner Kelly Fitzgibbons and their daughters, then himself.
Read more

Mark Levin lays out how Americans can combat Marxism

“Life, Liberty & Levin” host Mark Levin joined “Hannity” to discuss how people can begin to fight back against the growing popularity of Marxism in the United States.
Read more

Security researchers say they discovered two different types of commercial military-grade spyware on the phone of a leading exiled Egyptian dissident, documenting for the first time a hack by a little-known competitor of Israel’s notorious NSO Group
Read more

Audio released of first responders at deadly condo collapse in Florida; Yankees fan finally gets her dream of being bat girl after 60-year wait
Read more

How Without Remorse reinvents Tom Clancy movies for the...

The cast and director of Without Remorse reveal the challenges associated with bringing the acclaimed author’s best-selling thriller to life on Amazon Prime Video.
Read more

The best Cyber Monday laptop deal is the Dell...

The Dell XPS 13 is one of the best laptops ever made, and it's at its lowest ever price for Cyber Monday.
Read more

Family of boy killed by Chicago cop to view...

The chief of the World Health Organization has honored the late Henrietta Lacks, an American woman whose cancer cells ended up providing the foundation for vast scientific breakthroughs, including research about the coronavirus
Read more

Both cost £20 per month, but TalkTalk is throwing in a £70 voucher with its brilliant Black Friday broadband deal.
Read more

MOTDx: ‘The greenest football club in the world’ –...

As part of a film examining football's role in tackling the climate crisis, MOTDx visits Forest Green Rovers to see what they're doing as a club to create a more sustainable game.
Read more

Human error led to no matching Bing images for...

Rising temperatures in the Arctic are a warning sign for the planet. The melting ice has an economic upside for Russia.
Read more

The Idaho state House passed a bill to provide compensation to workers if they get sick from an employer-mandated vaccine.The bill was passed in a 67-3 vote with Democrats and Republicans support...
Read more

Afghanistan: Where will refugees go after Taliban takeover?

Thousands of people are scrambling to flee Afghanistan after the Taliban took control of the country.
Read more

Authorities say a Kentucky girl who was snatched from her bicycle by a stranger was found quickly, returned to her family and a suspect was charged with kidnapping thanks to the quick actions of neighbors and police
Read more

Shelby Houlihan will not be running at US Olympic trials after all and will likely miss the 2021 Games altogether.
Read more

Forza Horizon 5 is already being discounted ahead of...

Itching to get behind the wheel in Forza Horizon 5? This excellent CDKeys deal will get you there for less.
Read more

An ISIS-K commander said in a CNN interview conducted two weeks before the terrorist organization's deadly bombing attack on Kabul's airport Thursday that the group was waiting for a time to strike. ...
Read more

Microsoft, on an accelerated growth push, is buying speech recognition company Nuance in a cash deal worth $16 billion
Read more

Xbox Cloud Gaming just made waiting for downloads a...

Microsoft’s Xbox Cloud Gaming is coming to consoles, and will allow players to jump into the action without having to wait.
Read more

At Walt Disney World, our culinary team has perfected the recipe for dreaming up all our tasty treats: a dash of creativity, a pinch of passion and a generous helping of magic. This secret formula has touched the hearts of both our Disney culinarians as well …
Read more

A new design to clean up the Great Pacific...

The Ocean Cleanup, Dutch inventor Boyan Slat's organization, has developed a new design meant to collect plastic in the ocean. Tests this summer and fall have shown promise.
Read more

Unvaccinated travelers from the U.S. will be required to quarantine for 10 days upon their arrival in France after French officials added the United States to its coronavirus "red list," Reuters ...
Read more

Review: Jason Statham, Guy Ritchie reunite and have a...

Sen. Josh Hawley (R-Mo.) has raised more than $3 million during the first three months of 2021 after leading efforts to block President Biden's win, according to a new report.Hawley, who was the first Senate Republ...
Read more

The highly contagious Delta variant is fueling a surge in coronavirus cases as many who are unvaccinated refuse to get the vaccine. David Begnaud takes a look at cases in hard-hit Arkansas.
Read more

Trump PACs brought in over $82M for the first...

Former President Trump's political action committees (PACs) raked in over $82 million in the first half of 2021, according to political finance filings made public Saturday, with the ex-commander-in-chi...
Read more

German investigators say 14 suspects have been arrested in an investigation of a gang accused of bringing nearly five metric tons (5.5 U.S. tons) of cocaine from South America to Germany
Read more

Aiden Leos was shot and killed on a California freeway on May 21.
Read more

What CNN Underscored editors are hoping to buy on...

While we don't know for sure what items will be on sale or when this Prime Day, we do know the sale will have a lot to offer. The Underscored editors have come up with a list of all the products we're hoping to see marked down this Prime Day.
Read more

A botched-up plan for procuring jabs has dried up stocks and sent prices soaring on the private market.
Read more

Violence raged for another night amid the worst fighting in years between the Israelis and Palestinians. Also, Colonial Pipeline is back online after a cyberattack forced the company to take some of its systems offline but it could take days for service to re…
Read more

Members of Congress remain sharply divided in the aftermath of January 6. As a result, relationships among lawmakers have deteriorated. CBS News congressional correspondent Nikole Killion joins CBSN's Lana Zak to explain how the events of that day have led to…
Read more

Samsung phones vs Motorola phones: which have the best...

Do you buy a cheap, reliable Motorola or a more powerful, heavily-discounted (but still more expensive) Samsung phone?
Read more

Left-back Greg Taylor commits his future to Celtic until 2025 with a new contract on his 24th birthday.
Read more

A woman in North Carolina who became enraged by another driver after water splashed onto her car on the highway was shot in the face during a road rage incident – and a suspect has since been arrested.
Read more

"We can't ignore the reality that these wildfires are being supercharged by climate change," Biden said.
Read more

The Blue Jackets goaltender was initially believed to have died of a fall while trying to get away from a malfunctioning mortar.
Read more

Peter Bol: The Sudanese-Australian runner who lifted a nation

Peter Bol's Olympics has delighted Australians, becoming a "symbol of what we can aspire to be".
Read more

Connecticut Attorney General William Tong (D) on Monday urged TikTok leadership to meet with teachers and parents in the state - and himself - to address the "Slap a Teacher" challenge on the app."TikTok fails to c...
Read more

The results of a straw poll of conservative voters this weekend is spotlighting the appeal of Republican Gov. Ron DeSantis of Florida.
Read more

Increased traveling and spring break crowds are making US...

More than a million passengers have traveled through US airports daily for at least 10 days in a row, according to data from the Transportation Security Administration -- at a time experts say cases of a dangerous variant are climbing across the country.
Read more

The Global Chip Crisis Is a Blip for Mighty...

Thanks to a network developed by  CEO Tim Cook Apple, the company has ready access to cutting-edge components amid a global shortage
Read more

Your pictures on the theme of ‘my favourite food’

A selection of striking images from our readers on this week's theme.
Read more

Crypto CEOs to Congress: We want regulation, our way

Crypto leaders appeared at a House Financial Services Committee hearing that revealed an emerging ideological divide between the left and the right over how the government should oversee the industry.
Read more

The Texas secretary of state's office announced Thursday it would carry out an election audit ...
Read more

How constituents and authorities reacted to the tragic killing of Sir David Amess.
Read more

Covid: ‘The shift to online has been life-changing’

Kieran Culkin pressed that the death of Dakota – whose nickname was Cody – hit everyone in their family differently and they all were "torn up inside" while bereaving the accident.
Read more

Biden and Johnson relish the role of global good...

Carbis Bay in Cornwall, with its golden beaches and azure blue ocean, is prime G7 real estate. Think past summits, such as Taormina, Sicily in 2017 or Biarritz, France in 2019, but instead with the temperature turned down and rapacious seagulls scavenging for…
Read more

By refusing to raise the debt limit, Republicans are...

Increasing the debt limit should be done quickly, cleanly and without putting the benefits of America's seniors in jeopardy.
Read more

Could Putin Launch Another Invasion?