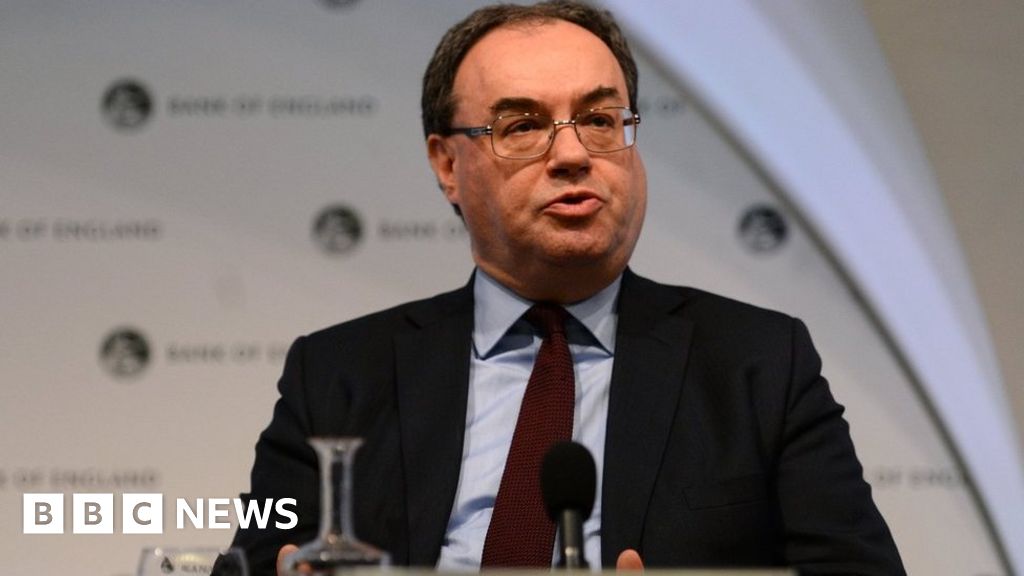 The UK economy will recover to its pre-Covid level by the end of this year, Bank of England governor Andrew Bailey has told the BBC.

Mr Bailey said he was “not out of firepower” in defending the economy as it recovers from the pandemic.

He said he was looking at “new tools” to deal with the UK’s biggest economic shock in 300 years.

These could include negative interest rates, but “that’s not a view on whether we will use them or not”.

Speaking to the BBC’s Today programme, Mr Bailey said the Bank expected inflation to start rising towards its 2% target in “the next two or three months”.

But he added that the Bank’s rate-setting Monetary Policy Committee would need to see “a lot more evidence” that the inflationary trend was sustainable before acting, given the “huge uncertainty” over the economic effects of Covid.

Mr Bailey said he had seen “no evidence” to support warnings that inflation could hit 4% or 5% as the recovery gathered pace.

He said the UK’s vaccination campaign had been “a great achievement” and he was now “more positive” about the recovery, but he wanted to add “a large dose of caution”.

However, that was “not much more than getting back to where we were pre-Covid”. These days, just being an author from Taiwan could dash your chances of getting a book published in China
Read more

A decision is expected Friday, more than a week after the vaccine's distribution was paused following reports of rare but dangerous blood clots in eight people under the age of 50.
Read more

Dr. Rochelle Walensky, director of the U.S. Centers for Disease Control and Prevention, issued a clarification statement Friday night after claiming on Fox News’ “Special Report” that the U.S. was “looking into” a possible nationwide vaccine mandate.
Read more

Covid-19: ‘Tests are coming out too expensive’, says Shapps

Transport Secretary Grant Shapps has said he wants to drive down the cost of Covid tests required for international travel to resume.
Read more

‘Why John Souttar can make difference on Hearts’ top-flight...

Former Hearts captain, manager and director of football Craig Levein assesses the club's prospects as they return to the Scottish Premiership.
Read more

Kasper Schmeichel says it is important Leicester are not "complacent and timid" in their search for more success, starting with Thursday's Europa League opener against Napoli.
Read more

The fallout over President Trump's reported vulgar remarks about other countries is putting bipartisan immigration reform in jeopardy, but the president is blaming Democrats for the lack of action. Errol Barnett is traveling with the president in Florida and …
Read more

HHS to mandate vaccinations for more than 25,000 employees

The roughly 25,000 HHS employees will have until the end of September to be vaccinated, an HHS official said.
Read more

This early Black Friday deal slashes the price of the Sony WH-1000XM4 headphones to a record low price.
Read more

Turkey Al-Turkey is sentenced to eight years and eight months for raping a woman in Swansea.
Read more

Senators on left, right hold together to push infrastructure

The Surface Laptop Studio is an all-new design from Microsoft, bringing a lot of what made the Surface Book so iconic to a brand new and unique form factor that artists are going to love.
Read more

Trent Rockets pick up their first win in the women's Hundred as they smash the highest score in the competition so far against London Spirit at Lord's.
Read more

A Black Woman Invented Home Security. Why Did It...

Last week French police officers evicted up to 1,500 people from a camp in Dunkirk.
Read more

For years, North Korean defectors have resorted to an underground network of brokers to call and send money to their families in North Korea
Read more

The actress, 56, appeared to be in top character when she was spotted on Monday filming the highly-anticipated HBO reboot "And Just Like That…" Bradshaw donned a regal pink suit-dress combination which she paired with a gold studded black belt and classic bla…
Read more

Covid in Scotland: Glasgow level 3 restrictions could be...

Vietnam Asks Samsung, Other Firms to Find Vaccines for...

Vietnam is asking Samsung Electronics Co. and other foreign companies to find Covid-19 vaccines for their workers as the nation grapples with a virus surge, the government website reported.
Read more

Biden says “we’re not done yet” as U.S. coronavirus...

President Biden celebrated the progress made against the coronavirus Friday, but said the country isn't done yet and the focus is now on reaching people who aren't vaccinated, Manuel Bojorquez reports. Dr. Brittani James, a family medicine physician, the co-f…
Read more

Watch: All the goals from SWPL1

Aaron Leventhal hopes this will encourage others to seek help, rather than bottle it up.
Read more

Argentina locks back down as coronavirus infections soar

House pushes back as DOJ proposes delay in McGahn...

Attorneys for House Democrats are pushing back against the Justice Department's proposal to delay court proceedings over a congressional subpoena to former White House counsel Don McGahn that was issued nearly...
Read more

The total number of coronavirus-linked deaths in NI since the start of the pandemic is 2,579.
Read more

Fast snowmelt has left reservoirs without the freshwater needed to sustain the state during its driest months.
Read more

How to get Bangladeshi men talking about mental health

Bangladeshi men in the UK are being encouraged to talk about the effects the pandemic has had on them.
Read more

The pair were discovered by police officers at a house in a village near Preston.
Read more

Deutsche Bank Said to Broaden Chairman Search Beyond Own...

Deutsche Bank AG is reaching out to external candidates in its search for a successor to Chairman Paul Achleitner, after indications from several...
Read more

Bucks vs Suns live stream: how to watch game...

Former Manchester United defender Patrice Evra says he was sexually assaulted by a school teacher as a teenager.
Read more

Case files, photographs and other records documenting the investigation into the infamous slayings of three civil rights workers in Mississippi are now open to the public for the first time
Read more

President Biden on Thursday expressed optimism on the prospects for passing a bipartisan infrastructure package, despite ...
Read more

Rep. Liz Cheney (R-Wyo.) on Thursday said she was "honored to serve" as the only Republican on the select committee to investigate the events of the deadly Capitol riot on Jan. 6."I'm honored to have been named to...
Read more

DIARY: Fleeing bombs, trying to endure in a city...

In Gaza City these days, no one knows where the next explosion will be, or when
Read more

How to watch The Mosquito Coast – stream new...

Adventure series sees Justin Theroux star in the adaptation of his uncle’s bestselling novel. Here we explain how to watch The Mosquito Coast online with Apple TV Plus.
Read more

Father calls for pornography sites to require proof of...

New phones and loads of services all bundled into one subscription.
Read more

Sen. Richard Burr (R-N.C.) said on Thursday that he opposes the Jan. 6 commission, becoming the first GOP senator who voted to convict former President Trump to come out against it.Burr, in a statement, pointed to...
Read more

PS5 restock update: PS5 is back at Game with...

India’s government has dismissed a recent study which estimated that the country’s excess deaths during the pandemic could be 10 times the official COVID-19 toll, calling it “misleading” and “fallacious.”
Read more

New York Governor Andrew Cuomo said the U.S. Department of Justice’s decision to drop an investigation into whether he mishandled Covid-19 outbreaks in nursing homes vindicated his administration and that he is “eager” for the results of other probes into his…
Read more

The week in 35 photos

A couple of high-profile trials have been taking place in the United States this week.
Read more

The White House announced on Thursday afternoon that the U.S. will commit millions of additional doses of the Johnson & Johnson vaccine with the African Union in the coming weeks.The U.S. government plans to sh...
Read more

Pittsburgh Steelers rookie Najee Harris returned to the California homeless shelter earlier this month where he stayed at times when he was a child to help renovate the building and the grounds.
Read more

Selfridges has created a wedding suite on the fourth floor of its London department store.
Read more

The United Arab Emirates' non-oil private sector expanded at its fastest pace in two years in July as demand rebounded from the COVID-19 pandemic, a business survey showed.
Read more

The UK professor and the fake Russian agent

An email exchange between a UK professor and a man called "Ivan" shows how intense the information war over Syria remains.
Read more

London Emerges From Lockdown Harder Hit Than Much of...

London is emerging from lockdown bruised by Brexit and a pandemic that hit the U.K. capital harder than other regions, raising questions about its ability to power the country’s economic recovery.The city accounts for a quarter of U.K. output and suffered alm…
Read more

Alabama’s Mo Brooks Claims He Can’t Be Sued Over...

Representative Mo Brooks, an Alabama Republican, claims he can’t be sued over his fiery speech challenging the 2020 election results at a rally just before the Jan. 6 Capitol riot because he’s a federal employee.
Read more

Aquaman 2 on set photo may have teased its...

Filming has begun on Aquaman 2, and its director may have already teased a potentially big plot point for the DCEU sequel.
Read more

Caroline Hyde, Romaine Bostick & Taylor Riggs bring you the latest news and analysis leading up to the final minutes and seconds before the closing bell on Wall Street and tackle the Verizon bond deal, the China chip industry and Roblox Guests Today: Kathy En…
Read more

The Justice Department has announced a cross-government effort to investigate and prosecute redlining, the practice of banks discriminating against racial minorities or certain neighborhoods
Read more

Later this year Roku will add Quibi's library of content to its free streaming channel, but the first exclusive show for the platform debuts next week. The action drama Cypher is a show licensed by Roku to stream on The Roku Channel, portraying a...
Read more

No-one was injured in the fire that broke out on a bus outside a Tesco store in Dunfermline.
Read more

NYC Subway Failed Because Someone Pushed the Wrong Button

New York’s subway shut down for five hours in August, stranding hundreds of passengers in tunnels and crippling transit across the city, because someone pushed the wrong button.
Read more

Even more all-star performers are headed to the Grammys later this month. U2 and Elton John are among the performers that will help celebrate music's biggest show at the 60th Grammy Awards. Watch the broadcast on CBS on Sun., Jan. 28.
Read more

Sportscene analysis: 'Martin Boyle dived and should have been sent off'