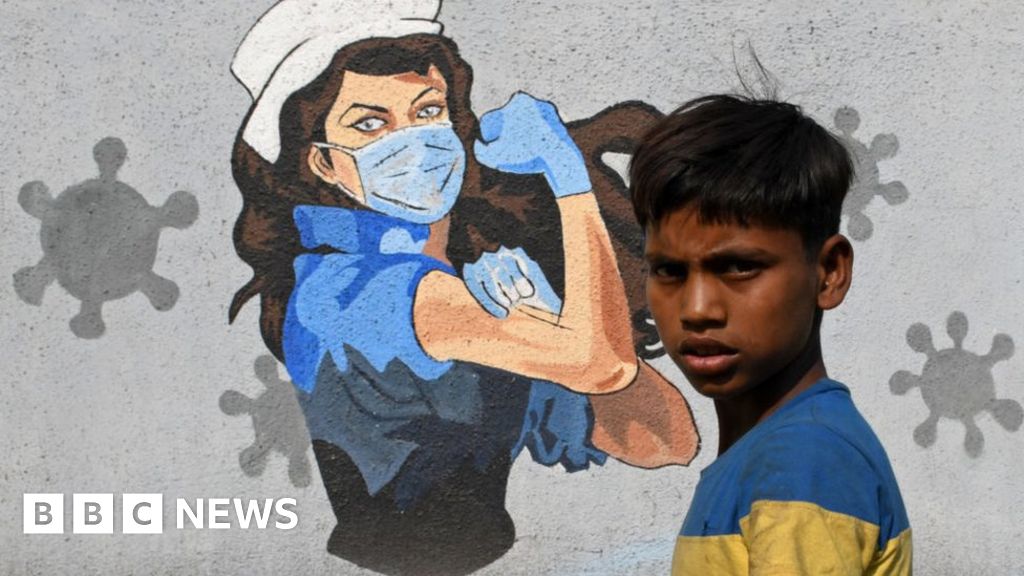 India has recorded its highest single-day spike this year on Monday, with 26,110 new coronavirus cases reported in the last 24 hours.

The western state of Maharashtra, which has long been a virus hotspot, accounts for more than half the new infections.

India’s caseload began to dip at the start of 2021, but poor adherence to Covid safety norms seems to be driving a fresh surge in several states.

India has so far recorded more than 11 million Covid cases and 158,000 deaths.

Scientists are on the hunt for new variants amid fears that they could be one of the reasons for the uptick.

The other is laxity in following Covid-19 safety protocols. Lack of masking and social distancing, and poor test and trace have all added to the spike in Maharashtra, Dr Sanjay Oak, a member of the state’s Covid task force, told the BBC recently.

The latest spike comes early on in India’s vaccination drive, which began in January. Nearly 30 million people have received at least one dose of a Covid vaccine so far.

The rollout is currently targeting elderly people and those with co-morbidities, but is expected to expand further soon.

The government in Maharashtra put Nagpur district, which has the country’s second-highest active caseload, under lockdown last week. It was the second lockdown in the state, which currently has the highest number of active and confirmed cases in India.

Other districts have followed with restrictions such as night curfews and closure of markets to stem the rise in cases. Six former football coaches are suing five Canton City, Ohio school officials and four others after they were suspended or fired for allegedly forcing a player to eat pork pizza against his religious beliefs, multiple news outlets reported on Tuesday.
Read more

Wesley Fofana: Leicester defender ruled out until 2022 with...

Leicester defender Wesley Fofana needs an operation on an ankle injury and will not play again until 2022, Brendan Rodgers confirms.
Read more

Ian Plass believes Wendy Knell would still be alive if he had stayed with her, a court hears.
Read more

Transport Secretary Grant Shapps announces which countries people will be able to visit from 17 May.
Read more

White evangelicals after Trump: What now?

Religion scholar and memoirist Diana Butler Bass says she's getting one question as she speaks to Americans about her work: How can you defend White evangelicals?
Read more

CBS: As vaccinations slow, at least 22 states not...

At least 22 states are not requesting their full coronavirus vaccine allotments for this week as the pace of vaccinations slows around the U.S., according to a CBS News analysis released Monday.CBS says it reached...
Read more

When Does NFL Preseason Start? Cowboys, Steelers Set For...

In addition to this week's Cowboys-Steelers game, here is the full slate of games for the first weekend of the 2021 NFL preseason.
Read more

Google Docs is finally getting a much-awaited feature

Google Docs is getting an update that allows users to place images behind or in front of text that brings it a step closer to becoming a complete word processor.
Read more

Westerners to board first commercial flight from Kabul

The Taliban will allow between 100 and 150 Americans to fly out.
Read more

Biden wants to not just invest in the regions that already have the most potential but also direct capital into underserved areas where people suffer the most.
Read more

Democrats press McCarthy to resign after comment ‘hard not...

Some Democrats are calling on House GOP Leader Kevin McCarthy to resign after he said it would be "hard not to hit" Speaker Nancy Pelosi with a the speaker's gavel.
Read more

‘I Was a Bodyguard For Michael Jackson, Kendall Jenner...

There were Michael Jackson fans who had bought rooms in the hotel just so they could be in the lobby when he came down each day. They also all had black cabs booked for the whole day so they could follow us wherever we went.
Read more

Todd Morley, a co-founder and former executive of finance behemoth Guggenheim Partners, is turning his attention to blockchain.
Read more

Meghan Markle, Prince Harry could be headed for ‘divorce,’...

German economy rebounds in 2nd quarter but short of...

Germany’s economy grew by 1.5% in the second quarter compared with the previous three-month period
Read more

Kosovo on Sunday opened its embassy to Israel in Jerusalem, becoming the third country to locate its embassy in the disputed city....
Read more

Tanzanian President Samia Hassan publicly admitted for the first time the presence of the Covid-19 pandemic in the East African country, in a departure from the denialism of her predecessor.
Read more

A second dose of Johnson & Johnson's COVID-19 vaccine given two months after the first leads to stronger protection, according to the company.
Read more

Ravens vs Raiders live stream: how to watch NFL...

Here's how to get a Baltimore Ravens vs Las Vegas Raiders live stream and watch the first NFL Monday Night Football of the season from anywhere, as Lamar Jackson gets into his stride.
Read more

The Trump administration had barred undocumented students, including those known as "Dreamers," from accessing aid that Congress allocated in COVID-19 relief packages.
Read more

EXPLAINER: Why is California Gov. Newsom facing a recall?

California Democratic Gov. Gavin Newsom is facing a likely recall election this year that threatens to remove him from office
Read more

The European Union filed a lawsuit against AstraZeneca Plc, raising the stakes in the spat between the drugmaker and the bloc’s 27 governments over vaccine deliveries.
Read more

Justin Bieber gets into cannabis business with ‘peaches’ pre-rolled...

Pop star Justin Bieber is entering the cannabis business with the creation of pre-rolled joints that he is calling “peaches,” Bloomberg reported.
Read more

Large sets of patient health records can be useful to medical researchers. But preserving the privacy of the individuals involved is a problem. Techniques for making the data anonymous have been called into question by data scientists. Now, algorithms can cra…
Read more

Eight councils say the government confirms there are no local lockdowns after confusion over advice.
Read more

House Republicans on Monday touted a plan they're pitching as a way to secure "cleaner American energy," highlighting existing legislation that seeks to advance the use of nuclear and natural gas.A press rele...
Read more

J&J Vaccine Batch Is Cleared by FDA After Safety...

The Food and Drug Administration cleared a batch of Johnson & Johnson’s coronavirus vaccine for use after a safety review, the drug regulator said on Friday.
Read more

Former President Trump reportedly called his acting attorney general almost every day following his defeat in the 2020 presidential election in an attempt to push a probe into unsubstantiated claims of voter fraud, ...
Read more

Support for minimum wage hike cuts across income levels, but there are some political divisions.
Read more

Except for every sticking point, Dems are close to...

And Mitch McConnell lines up behind Herschel Walker in Georgia.
Read more

Eboni McCann walked off the pitch with the rest of his team following racist abuse from a fan.
Read more

Whitmer’s campaign may have to return or donate millions...

Gov. Gretchen Whitmer’s reelection campaign may have to return or donate over $3 million identified as excess contributions after a lawsuit brought by the state’s Republican Party.
Read more

If they go out of business it will "rip the heart out of the British countryside", he says.
Read more

Frontline members lean in on earmarks

With Melanie Zanona. LEND ME YOUR EARS, AND MONEY: The Cicadas are coming and so are the earmark requests. House members had to submit...
Read more

How One Australian Coal Giant Turned China’s Ban Into...

China’s ban on Australian coal imports has proved a boon for Sydney-listed Coronado Global Resources Inc., one of the world’s top producers of the metallurgical variety that’s key to steelmaking.
Read more

But some members of SEIU Local 1000, which represents 96,000 state workers, said the vote to donate $1 million in support of Newsom's fight against the recall would cause a further divide in the union.
Read more

Ousmane Dembele scores a dramatic late winner to give Barcelona victory over Real Valladolid and a huge boost in their La Liga title challenge.
Read more

The actor who plays rogue PC Ryan Pilkington says it was "so cold", but "so exciting to film".
Read more

At Least 8 Dead in Crowd Surge During Travis...

Houston (AP) -- Officials in Texas say at least eight people are dead and several others have been injured in a crowd surge at the Astroworld Festival.
Read more

‘Rush Limbaugh Show’ comes to an end as ‘inspired’...

On August 1, 1988, Missouri-born radio commentator Rush Limbaugh launched "The Rush Limbaugh Show" on a handful of radio affiliates. On February 2, 2021 – unbeknownst at the time to his now-650 affiliates and millions of listeners – Limbaugh took to the airwa…
Read more

Biden Thanks Tlaib for Being a ‘Fighter’ After She...

Biden promised the legislator that he will do everything he can to make sure her Palestinian family members remain safe inside Israel's West Bank.
Read more

Nearly 30,000 Haitian migrants have already made their way over the U.S.-Mexico border in recent weeks, but Panama's foreign minister says far more are on their way – and she has been sounding the alarm for months.
Read more

How Facebook Hides How Terrible It Is With Hate...

The company publicly claims its AI is amazing at removing harmful content, but internal documents suggest they know the algorithm is ineffective.
Read more

Justices don’t vote the way you expect them to,...

The former governor said the Obamacare case was the latest proof.
Read more

Football memorabilia including Sir Bobby Charlton shirt up for...

It has taken decades to collect the medals and shirts but they will be sold as the owner moves home.
Read more

City where Daunte Wright shot to vote on policing...

Mario Draghi has rebuffed the Vatican after it issued a protest over a bill on gay and other rights.
Read more

EPA withdraws rule allowing use of radioactive material in...

The Environmental Protection Agency has withdrawn a 2020 rule that would allow a radioactive substance in some road constructi...
Read more

Australia has canceled four bilateral deals with China, Iran and Syria under new laws that give the federal government power to overrule international agreements by lower-level administrations deemed to violate the national interest
Read more

Ilhan Omar says she is focused on finding ‘solidarity’...

Rep. Ilhan Omar on Wednesday issued a lengthy statement highlighting the historic ties between the Black and the Jewish communities and said she's committed to finding "solidarity" with both her Jewish and non-Jewish colleagues to fight injustices.
Read more

Ify Iwobi, who will play at a Remembrance Sunday event, says the day is for everybody.
Read more

M&S says it may have to reduce opening hours if more workers are forced to self-isolate.
Read more

US raises concern as China flies warplanes south of...

A Chinese nuclear power plant is investigating an unusually high concentration of gases in one of its reactors, one of its owners said Monday.
Read more

The U.S. Open tennis tournament will return with 100 percent capacity later this summer, after no spectators were allowed last year amid coronavirus concerns.The U.S. Tennis Association announced on Thursday that t...
Read more

US seeking to boost electric vehicle material production in...

The U.S. government is in seeking to boost Canadian production of minerals and materials that are critical to make electric vehicles, according to a report from ...
Read more