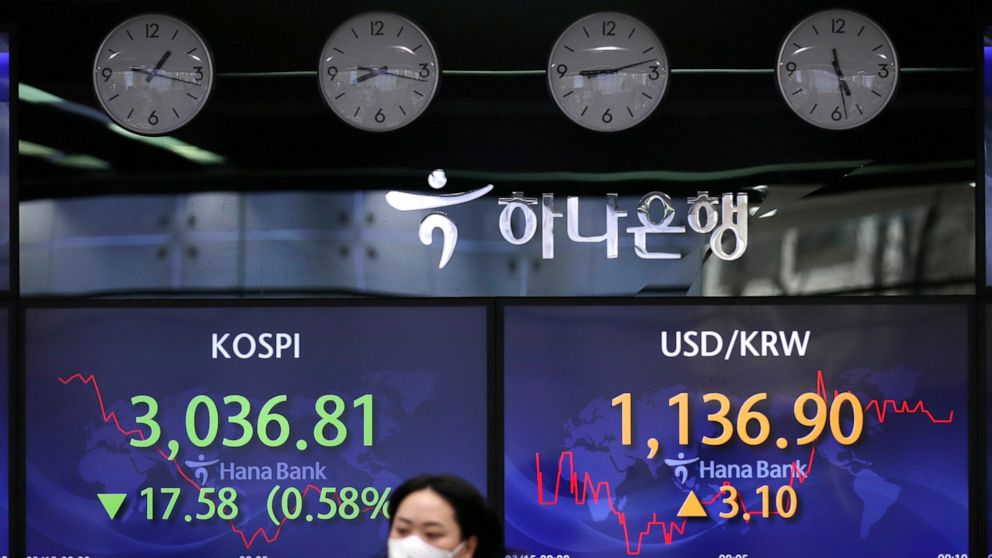 BANGKOK — Shares were mixed in Asia on Monday as China reported a variety of data that painted a complicated picture of its recovery from the pandemic.

Benchmarks rose in Hong Kong and Tokyo but fell in Shanghai and South Korea.

The passage of a $1.9 trillion aid package for the U.S. economy has added to investor confidence that the U.S. and global economy will likely experience a strong recovery from the pandemic in the second half of the year but also potentially increase the rate of inflation.

China has led the global recovery, reopening earlier than other countries from coronavirus shut-downs that emerged in the central city of Wuhan in early 2020.

Retail sales jumped nearly 36% year-on-year in January-February from a year earlier. But the surge was mostly driven by strong demand for cars, catering and jewelry, suggesting Chinese consumers were splashing out during the Lunar New Year, ING economists said in a report.

The data were exaggerated by low base effects from the shutdowns last year, they said.

Meanwhile, the jobless rate rose to 5.5% from 5.2% a year earlier, possibly affected by flare ups of coronavirus in some areas, analysts said.

Travel restrictions weighed on retail sales but boosted industrial output and investment. We think activity will remain strong during the first half of this year, before giving way to a weaker second half,” Julian Evans-Pritchard of Capital Economics said in a commentary.

Domestic policy support is being gradually withdrawn. And foreign demand for Chinese goods will drop back as vaccines start to reverse the recent shift in global consumption patterns,” he said.

Investors will be watching this week for the outcome of a Federal Reserve policy meeting, which wraps up on Wednesday. Japan’s central bank will be issuing a policy update on Friday.

The increase in bond yields came as President Joe Biden signed into law the $1.9 trillion stimulus plan, which will include $1,400 checks for most Americans and additional payments for those with children or those who collected unemployment benefits last year. President Biden also laid out a plan, in a primetime speech Thursday, to expand vaccine eligibility to all Americans by May 1.

Wall Street got another sign Friday that inflation is creeping higher. The Labor Department said its producer price index, which measures inflation before it reaches consumers, rose by 0.5% last month following a record jump of 1.3% the month before. Over the past year, wholesale prices are up 2.8%, the largest 12-month gain at the wholesale level in more than two years.

Some economists fear that inflation, which has been dormant over the past decade, could nudge higher under the extra demand generated by the stimulus package. Others disagree, given that there are 9.5 million fewer jobs in the American economy than there were before the pandemic hit a year ago. They contend that unemployment will keep a lid on inflation.

In other trading Monday, benchmark U.S. crude oil climbed 50 cents to $66.11 per barrel in electronic trading on the New York Mercantile Exchange. It lost 41 cents to $65.61 per barrel on Friday. Brent crude, the international standard, added 47 cents to $69.69 per barrel. Julia Wang on the Markets (Radio)

South Africa has launched a new COVID-19 vaccination drive in an attempt to give doses to 500,000 people in two days
Read more

The group of unnamed athletes represent a variety of nations, including Belarus, Ethiopia, Kenya, Morocco, Nigeria and Ukraine.
Read more

Family of Florida boy who died of flu warns...

The family of Dylan Winnick wants everyone to be aware that the flu can be deadly and that people should take precautions.
Read more

Lordstown Motors backtracks, says it has no binding orders...

Lordstown Motors, the struggling electric truck startup, said that it has no firm orders for its vehicles, backtracking on assurances it made earlier this week that the company had enough committed buyers for its pickup truck to keep production going through …
Read more

EXPLAINER: What the metaverse is and how it will...

The term metaverse seems to be everywhere
Read more

Tucker Carlson: Biden’s officials are turning on him, and...

Tucker Carlson highlights how many of Biden's top officials, and the mainstream media, have contradicted the president in public, and what that means.
Read more

US takes new aim at ransomware after costly year...

Bitcoin and Ether remained under pressure after a bruising U.S. session that left much of the cryptocurrency community in shock.
Read more

Powell: Need for Digital Dollar Is an Issue for...

Federal Reserve Chair Jerome Powell said the central bank is involved in a large-scale research and development project on the digital dollar, and that questions of whether adopting such a currency would provide a public benefit have yet to be resolved.
Read more

Four men in their 20s were taken to hospital after being stabbed in Leicester.
Read more

The Huawei Band 6 fitness tracker will be available on Amazon at Rs 4,490 for SpO2 and heart-rate monitoring, long battery and design.
Read more

A victory for women against Texas abortion law would...

Law professor Mary Ziegler writes after Monday's Supreme Court oral argument on SB8, Texas's restrictive abortion measure, that while the justices' questions implied that the Texas law is in trouble, they also showed that Roe v. Wade is in trouble too.
Read more

Crump: Chauvin sentence ‘should be the norm’

Following the news that a former Minneapolis police officer had been sentenced to 22.5 years in prison for the murder of George Floyd, attorney Ben Crump said that the sentencing should not be the exception but the norm.
Read more

Court clears way for Samoa to get its first...

Can President Biden do anything to lower gasoline prices?

The White House has called on the FTC to investigate high prices and suggested it may tap the nation's strategic reserves.
Read more

Biden, Erdogan Discuss How to Move Past Fighter Jet...

Sign up for our Middle East newsletter and follow us @middleeast for news on the region. President Joe Biden and Turkish President Recep Tayyip Erdogan...
Read more

The election is over but months of talks are just getting started to see who will be chancellor.
Read more

During the first large protests of 2021, more than 200 were detained Thursday.
Read more

AMA warns of severe and irreparable harm if Biden...

Roethlisberger recently said on "The Dan Patrick Show" that he is vaccinated, making him eligible to return in week 11.
Read more

POUNDING THE PAVEMENTOR THE SAND? Stop me if youve heard this before: It is a big week for infrastructure talks. But it is...
Read more

A new patent shows a folding tablet from Samsung and it looks pretty intimidating.
Read more

Saturday's papers react to a rise in the number of people infected with Covid in the UK.
Read more

Beijing's office that oversees matters in Hong Kong has warned of threats made to a judge who sentenced media tycoon Jimmy Lai and other democracy activists for their roles in an unauthorised assembly on Oct. 1, 2019.
Read more

President Biden on Monday expressed support for the people of Cuba and Haiti amid unrest in both countries"The Cuban people are demanding their freedom from an authoritarian regime. I don't think we've seen anythin...
Read more

Police in Mumbai were called in to rescue the five-day-old after residents were alerted by cats.
Read more

In his first television interview on the subject, Grammy Award-winning artist Ryan Lewis opens up to CBS News Correspondent Ben Tracy about his mother's struggle with HIV and their new initiative to help others with the disease, the 30/30 Project.
Read more

Deutsche Lufthansa AG will raise 2.14 billion euros ($2.5 billion) by offering new shares to its stakeholders, the airline said in a statement on Sunday.
Read more

Most Canadians prefer the Bank of Canada’s existing inflation targeting mandate to any other alternative frameworks, even though there appears to be an appetite for flexibility.
Read more

The presenter is taking over from Nick Hewer as the host of Channel 4's daytime quiz show.
Read more

As America exits, history repeats self…

Calling artificial intelligence "the holy grail," Bill Gates says he expects robots to do jobs for humans within the next 20 years. Mashable chief correspondent and editor-at-large Lance Ulanoff joins CBSN with more on the possibility.
Read more

Mexico's government is acknowledging that the country's true death toll from the coronavirus pandemic now stands above 321,000
Read more

The vaccines minister responds to accusations of "local lockdowns by stealth" from Labour.
Read more

US troops arrive to help with evacuation efforts as militants seize a city an hour's drive from Kabul.
Read more

Harris Faulkner On Ilhan Omar Police Comments: “How Does...

Animal Crossing New Horizons’ DLC is out now, and...

The president's selection of Silicon Valley critics for key posts at the White House and the Federal Trade Commission could be a sign of a new direction — or a sop to progressives.
Read more

A CBS News/New York Times poll released Tuesday shows the Democratic race for the White House is tightening. Bernie Sanders has cut Clinton's lead to only seven points. Nancy Cordes spoke with the Vermont senator about his rise.
Read more

Pro-Trump Republicans are flocking to site of partisan Arizona...

Some of Donald Trump's closest allies at the state level are heading to Arizona in hopes of bringing a similar partisan ballot review to their own states.
Read more

The Morning Show season 2 is coming this year – and the first footage for Apple TV Plus' drama series has also been revealed.
Read more

Sam Cane: New Zealand captain out for up to...

All Blacks captain Sam Cane is ruled out for up to six months after suffering a pectoral injury playing for the Chiefs.
Read more

Guinea's new military leaders are seeking to tighten their grip on power, saying they will replace governors with regional commanders
Read more

Italy to mandate Covid-19 ‘Green Pass’ for all workers

The Italian government has approved a decree making it mandatory for all public and private sector workers to show proof of vaccination, a negative test or recent recovery from infection, Italian Health Minister Roberto Speranza told a news conference on Thur…
Read more

U.S. Transportation Secretary Pete Buttigieg ruled out plans on Monday to increase in the federal gas tax or charge drivers a fee based on miles driven to pay for the Biden administration’s $3 trillion infrastructure plan.
Read more

Biden says democracy ‘worth dying for’ in speech honoring...

President Joe Biden is observing his first Memorial Day as commander-in-chief at Arlington National Cemetary with a wreath-laying ceremony and remarks.
Read more

US bans shrimp imports from Mexico based on inadequate...

The United States on Friday announced a ban on shrimp imported from Mexico after the country failed to adhere to mandated sea turtle protections during shrimp harvesting, ...
Read more

Dems to make the case for immigration reform in...

The chamber's rules referee will hear reasoning on whether Democrats can include a legal path to citizenship for certain immigrant groups in their partisan spending bill.
Read more

Army disciplines officers and soldiers for handling of Vanessa...

The Republican congresswoman has long taken issue with a mandate requiring face coverings be warn in the lower chamber of Congress.
Read more

UK leader gambles on tax hike to pay for...