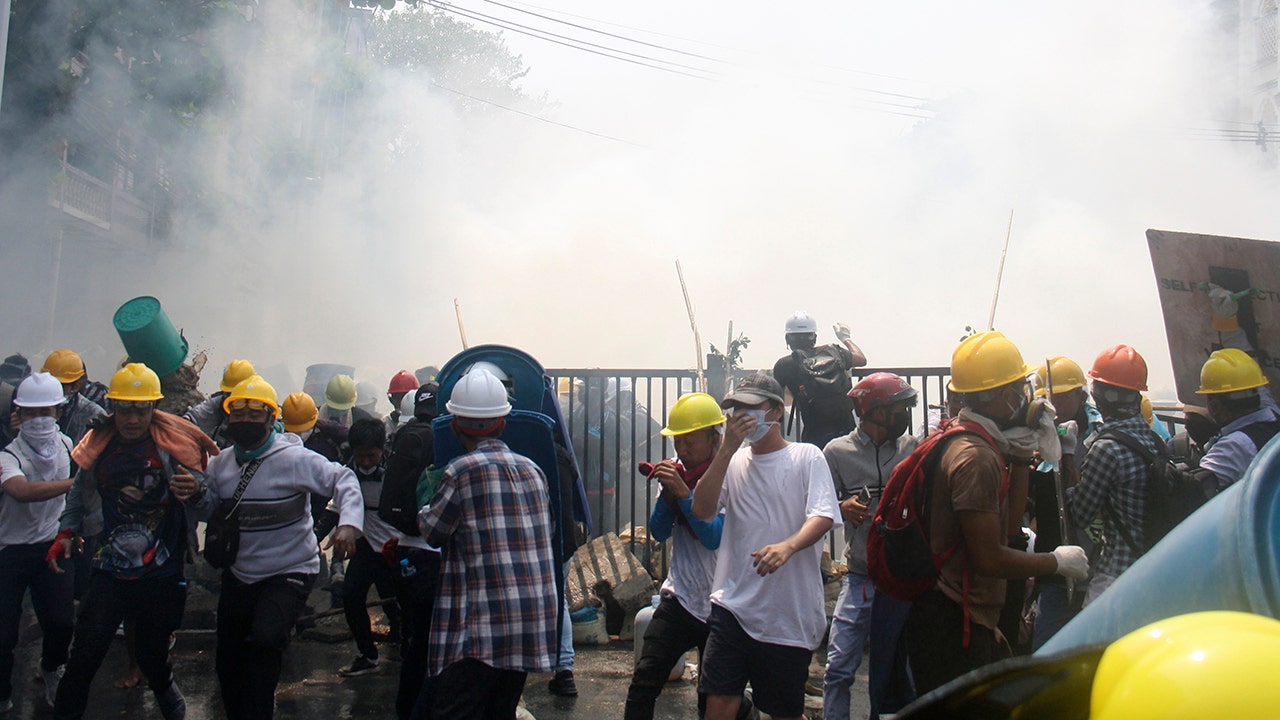 Martial law was imposed in towns across Burma after the countrys bloodiest day since last months military coup that resulted in the deaths of at least 39 pro-democracy protesters, according to a report.

Reuters, citing the Assistance Association for Political Prisoners, an advocacy group, reported that the 22 protesters were killed in a suburb of Yangon, the countrys largest city and 16 in other locations across the country.

A photojournalist who witnessed the shootings in Hlaingthaya, a suburb of the city, told Reuters, “It was horrible. People were shot before my eyes. It will never leave my memory.”

Protests have broken out across the country after the Feb. 1 military coup that disposed of the countrys elected leader Aung San Suu Kyi. The military claimed widespread fraud during the November election that saw her party, the National League for Democracy, carry 80% of the parliamentary seats.

Protests have broken out ever since the coup and the Biden administration has imposed sanctions on the countrys generals. The sanctions have seemed to have little effect on the bloodshed and the country’s military. Last month, China blocked U.N. condemnation over the coup.

The military has also faced rebuke from its close trade partner Singapore for opening fire on its own people. Prior to Sundays crackdown, reports indicated that about 70 protesters have been killed.

“They used machine guns and were constantly firing at people,” May Myat Noe, 21, told Reuters. Canadian doctor accused of using own sperm to inseminate...

Hundreds of victims of a former Canadian fertility doctor, who allegedly used the wrong sperm and sometimes his own while artificially inseminating patients, will be awarded $10.7 million in a tentative agreement reached this week, according to reports.
Read more

Trumka had served as president of the federation for more than a decade and has been a close ally of the Biden White House.
Read more

The reforms, which would have increased taxes on low earners, have now been shelved.
Read more

The Canon EOS R5c is strongly tipped to be a new mirrorless cinema camera, with some video-focused tricks up its sleeve.
Read more

Welcome to our weekly newsletter — a fresh, global perspective on the stories that matter for Australian business and politics. This week: Why Qantas is flying high even with our international border closed, and finding buried treasure in the unlikeliest of p…
Read more

Electronic items were seized by police who arrested the 41-year-old man in a suburb of Cork city.
Read more

U.S. Sen. Ted Cruz slammed PolitiFact on Tuesday for rating his July statement that there is “clear legal authority to handcuff and put in leg irons” absentee legislators.
Read more

Illinois governor fires back at billionaire over criticism of...

Illinois Gov. J.B. Pritzker (D) fired back on Tuesday at billionaire Ken Griffin, a supporter of former Gov. Bruce Rauner (R), over increased crime in Chicago.Griffin, who is the CEO of the multinational hedge fund...
Read more

Lee Westwood says he felt tired as he missed the cut at the Honda Classic, after successive runners-up finishes on the PGA Tour.
Read more

Romney Says America’s Leadership is Too Old to Take...

Sure enough, it was a volley against his colleagues, members of one of America’s most cobwebbed institutions. But there's more to this story. The post Romney Says America’s Leadership is Too Old to Take on China appeared first on The American Conservative.
Read more

The Bank of England slowed its emergency bond-buying and signaled it’s on course to end that crisis support later this year as a strong rebound takes hold across the economy with the removal of pandemic restrictions.
Read more

Asheville rising star Indigo de Souza finds power in casting her feelings as obvious truths. She tells MTV News how her newest album, 'Any Shape You Take,' reflects how she moves through the world.
Read more

The New York Stock Exchange set a reference price of $45 for the direct listing of Roblox Corp., the online games company that originally planned to go public via a traditional initial public offering.
Read more

Democratic state legislators from across the country are forming a voting rights council as the party searches for ways to fight back against a wave GOP-led states codifying restrictions to the ballot box.The counc...
Read more

South Lake Tahoe is under a state of emergency as the Caldor Fire nears. The wildfire has already burned more than 450 homes.
Read more

This means that both vaccinated and unvaccinated people are equally capable of transmitting the virus to other people.
Read more

An iconic POS system, known for it's efficiency and minimal design. But how suitable is it for your business?
Read more

Eddie Howe: What can Newcastle expect from new manager?

Silver Little Eagle, a member of the Northern Cheyenne Tribal Council in Montana, is recovering from an assault as Billings police investigate.
Read more

This Echo Dot and smart light bulb bundle can...

Amazon has bundled the Echo Dot (2020) with a TP Link Smart Bulb for a discount of almost 50%, offering a hefty saving.
Read more

Brooke Shields and her daughter get matching tattoos as...

The “Blue Lagoon” actress recently took to Instagram to show off her and her daughter Rowan Francis' matching ink: a ladybug.
Read more

At least eight people were fatally shot and dozens were injured during parties or gatherings on or related to the Juneteenth holiday injured in seven parts of the country, according to officials and local reports.
Read more

Logan Paul goes the distance in bout against Floyd...

The YouTube personality celebrated the accomplishment of going the distance against the 44-year-old boxing legend.
Read more

Prince William: Before travelling to space, save the planet

Prince William has criticized some of the world’s richest men for using their wealth to fund a new space race and space tourism, and called on the world's great minds to fix the planet first
Read more

Joe Rogan slams Biden over lack of leadership: ‘Everybody...

Podcast giant Joe Rogan slammed President Biden on Thursday, saying he’s not a "real leader" because "everybody knows he’s out of his mind."
Read more

Cheney saga boils the GOP down to its essence

And the White House tries to figure out a path to "return to normal."
Read more

Roethlisberger recently said on "The Dan Patrick Show" that he is vaccinated, making him eligible to return in week 11.
Read more

Luxury cars are good business even during the pandemic
Read more

2021 Tribeca Festival: More highlights you can stream at...

The 20th annual festival is not limited to NYC audiences, with many world premiere features and documentaries available to stream at home.
Read more

Afghanistan: How can the West stop terror bases?

The foreign secretary says the UK will fight ISIS by all means available - but what does that mean?
Read more

Nadia Whittome: MP back at work after leave of...

The cases against a doctor who admitted to performing an abortion are the first known lawsuits.
Read more

Lord Clarke is the first senior health minister from the 1980s to testify on the NHS scandal.
Read more

Another American has been detained in North Korea, raising the number of U.S. citizens held there to four. North Korea arrested Kim Hak Song Saturday for unspecified hostile acts. He is the second American professor to be arrested in the last month. Adriana D…
Read more

Reddit banned an anti-vaccine forum and limited the visibility of 54 other subreddits associated with coronavirus denial after several moderators protested the platform's approach to health misinformation....
Read more

Coronavirus: Eurostar trains will not stop in Kent until...

Eurostar trains have not been stopping at Ashford or Ebbsfleet since March 2020.
Read more

The Hundred: Bowlers lead Welsh Fire to win over...

Welsh Fire strangle Oval Invincibles with a brilliant bowling performance at The Oval, to earn back-to-back victories in the women's Hundred.
Read more

Suspicions raised after woman says she accidentally shot her...

The relationship between high school sweethearts turns toxic, culminating in a fatal shooting with allegations of abuse that would leave their families shattered and their small town of Griffin, Georgia, divided over the evidence in the case.
Read more

Watch as Cambridge claim the double at the 2021 Boat Race with a third consecutive victory for the men's team.
Read more

Maybe it was Boston's defense. It could have even been Brooklyn's own fans.
Read more

England break India's resistance to surge to victory by an innings and 76 runs in the third Test at Headingley and level the series at 1-1.
Read more

The benefits of the Covid-19 vaccine by Pfizer Inc. and BioNTech SE for children ages 5 to 11 are likely to outweigh the risks, according to a U.S. Food and Drug Administration staff analysis ahead of an advisory panel meeting next week.
Read more

The president’s latest global moves have frustrated progressives and moderates alike, from the Israel-Palestine conflict to a Russian gas pipeline.
Read more

The Xiaomi Mi Home Security Camera 360 1080p lets you pan and tilt the lens to get a clearer picture of your home, but how does it compare to models from Arlo and Ring?
Read more

Frustration and anxiety runs like a theme through most conversations in today’s Afghanistan as Afghans witness the final withdrawal of the U.S. military and its NATO allies
Read more

A new Ebola vaccine is proving "highly effective," the WHO said. The medicine could prevent another epidemic like the on that swept killed more than 11,000 when it swept through West Africa. CBSN's Dana Jacobson has more on the vaccine.
Read more

DNC day two: What can we expect?

Bernie Sanders said he's "proud" to stand with Hillary Clinton as she prepares to officially become the Democratic presidential nominee. CBSN political contributor Nomiki Konst and Democratic strategist Lis Smith join CBSN with more on what we can expect from…
Read more

Opinion | My Family Fled Cambodia as the Americans...

For Cambodians who escaped the Khmer Rouge and Afghans who fled the Taliban, leaving home is just the beginning.
Read more

The Taliban has called for leaders of the Afghanistan Muslim community to urge unity amid recent protests and citizens feeling the country, ...
Read more

Charlie Dent: An Afghan refugee lived with my family....

Former GOP Rep. Charlie Dent writes that the unfolding crisis in now Taliban-controlled Afghanistan has compelled him to speak up about an experience he previously had not revealed -- the time he took in a young Afghan refugee and helped her see through her s…
Read more

Man City quiz: Name all the players to have...

Manchester City have regained the Premier League title so we thought we'd take a look at every player to have ever scored in the league under Pep Guardiola.
Read more