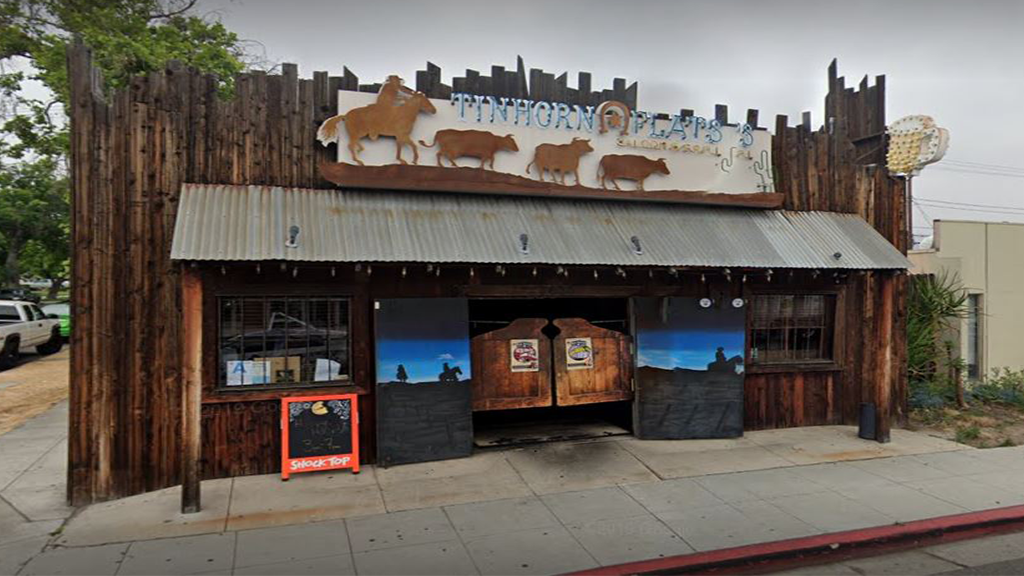 Los Angeles restaurants have been given the green light to resume indoor dining Monday. But one restaurant has been given a notice that its power would be shut off. Why? Because the owner kept the lights on during the pandemic to survive.

A Los Angeles County judge on Friday authorized the City of Burbank to cut off electricity to a restaurant that has stayed open in defiance of a court order issued earlier in the week.

The Los Angeles Superior Court issued a Temporary Restraining Order (TRO) against Tin Horn Flats on Monday, March 8, requiring that the restaurant close and not open without a County Health Permit and a City Conditional Use Permit, the City of Burbank said in a statement.

The restaurant remained open, despite the order, and on Friday, and the court authorized the city to cut their electricity after giving a 24-hour notice.

The city said that the court did not provide permission to padlock the restaurants doors but “continues to reserve such a remedy as a last resort.”

The city says it will return to court for further orders and enforcement if Tin Horn Flats still refuses to close.

The city says it took civil action against Tin Horn Flats after the restaurant broke the state and local in-person dining ban that was issued in December.

In late February, the city adopted a resolution to revoke the “Conditional Use Permit (CUP) for Tin Horn Flats for allegedly violating the Los Angeles County Health Officer Orders “in a manner which endangers the public health, safety and welfare, and creates a public nuisance.”

A hearing on a preliminary injunction is scheduled for March 26. At the hearing, the judge could continue the closure order and further orders during the period while the litigation is pending.

Hours before the Los Angeles judge authorized Burbank to cut electricity to Tin Horn Flats, the restaurant posted a quote from Thomas Jefferson, with a caption that stated: “I simply will NEVER comply. Not for any reason and not from any advice from anyone.”

“I chose to disobey rules that have zero science behind them and rules that directly threaten my livelihood needlessly,” the caption read. “These people implementing and following these rules do NOT represent my values nor my beliefs. I will go down with my ship if need be.”

The restaurant said its power was turned off on Saturday. On its Instagram page, the restaurant asked the public to help fund a generator and lights and said will be open on Sunday for a BBQ.

Fox News has reached out to Tin Horn Flats and the City of Burbank with a request for comment but did not hear back before publication.

The judges ruling comes ahead of a slate of business sectors in Los Angeles County that are expected to reopen on Monday amid a decline in the stated number of COVID-19 cases and an increase in vaccinations.

Restaurants may resume in-door dining so long as they serve diners indoors at 25% capacity, according to the county’s public health department. Tables must be spaced eight feet apart, and only one household with a maximum of six people per table will be allowed indoors.

The Los Angeles County Department of Public health is encouraging restaurants to continue to prioritize outdoor dining, pickup, and delivery services for the safety of workers. Neanderthals may have been closer to our species of prehistoric modern human than previously believed after cave paintings found in Spain proved they had a fondness for creating art, one of the authors of a new scientific report said on Sunday.
Read more

A manufacturing plant in Caledonia, Minnesota, that's partially owned by Major League Baseball is shutting down. The closure will move dozens of jobs out of the state, with most going to China. Kris Van Cleave has more.
Read more

Greenpeace is apologizing after two people were injured when a protester flying a paraglider parachuted into a stadium before Germany's soccer game against France in the European championship tournament,...
Read more

Lessons from the Derek Chauvin verdict

What lies ahead for racial justice following this week's guilty verdict in the trial of a White former Minneapolis police officer in the death of George Floyd?
Read more

Will Trump tone down for calmer campaign?

Donald Trump’s top strategist Paul Manafort is telling Republican National Committee members they will soon see a different candidate in the months to come. Manafort says Trump is ready to reach out to a wider range of voters. He spoke as party officials said…
Read more

Indian citizens who are 18 years or older will be eligible for the Covid-19 vaccines starting May 1. Here's how it will work.
Read more

Following the arrest of six police officers in connection with the death of Freddie Gray, the tone of the rallies have gone from violent to almost celebratory. Mark Albert reports from Baltimore.
Read more

What we know about ISIS-K, the group claiming responsibility...

Two North Carolina sheriff's deputies have died after a 13-hour standoff Wednesday with a shooter who barricaded inside of a home. ...
Read more

Musicians are planning to go back on the road starting this summer, but concert venues need some help first.
Read more

New iPad Pro 2021 preorders are going live very soon - here's everything you need to know to secure yourself a premium tablet.
Read more

Afghan president latest leader on the run to turn...

Afghanistan’s president, driven out by the Taliban, is the latest leader on the run to turn up in the United Arab Emirates
Read more

The mayor orders people to stay at home as floods engulf the streets of Catania in southern Italy.
Read more

Demonstrations turned violent in Baltimore following the funeral of Freddie Gray, who died after sustaining a serious spinal injury while in police custody.
Read more

Alfie Hewett and Gordon Reid become the most successful all-British doubles team with victory in the wheelchair final at Roland Garros.
Read more

The security hole exploited by WannaCry is still alive,...

New research from ExtraHop has revealed that insecure protocols are still be used in enterprise IT environments despite the known risks.
Read more

Good morning and welcome to Fox News First. Here's what you need to know as you start your day Senate passes bill requiring the...
Read more

Next in line of Manning quarterbacks facing a rush...

Greece wildfires: Another blaze breaks out on Evia island

READ: Supreme Court order and dissents in challenge to...

The Supreme Court, in a 5-4 vote, late Wednesday denied a request from Texas abortion providers to block a new state law that bans most abortions after six weeks.
Read more

China knocks Yellen over call for ‘unified front’ between...

China on Tuesday knocked Treasury Secretary Janet Yellen's call for the U.S. and Europe to come together as a "unified front" against Chinese human rights abuses and "unfair economic practices," according to ...
Read more

The file size of Halo Infinite may have been revealed, and it represents yet another Xbox Series X game which will take up a huge chunk of storage.
Read more

The migrants were struck by the train in a southern coastal town near Biarritz on Tuesday morning.
Read more

Progressive Democrats vow to defy Pelosi, vote no on...

James Gibbons was fatally stabbed after feeding Christopher French and defending him from youths.
Read more

The French utility that partly owns a nuclear power plant near Hong Kong is seeking more information on a gas buildup in a reactor, even as its Chinese partner insists the facility is operating safely.
Read more

Filipinos are marking Good Friday, one of the most solemn holidays in Asia’s largest Roman Catholic nation, with deserted streets and churches following a strict lockdown to slow down the spread of the coronavirus
Read more

WandaVision's Matt Shakman is directing the next Star Trek movie, which films next year.
Read more

How to watch Game of Thrones in Australia: stream...

Watch every episode of Game of Thrones online in Australia. Catch up with season 8 and everything else now that it's all live.
Read more

watchOS 8 was revealed at WWDC 2021, and we've heard plenty about the next big Apple Watch update – here's when to get it and how you can sign up for the beta.
Read more

Wall Street banks have been among the biggest beneficiaries of the pandemic-era trading boom, fueled by the Federal Reserve's massive injection of cash into financial markets.
Read more

The home secretary says resettlement plans for Afghan refugees will be an international effort.
Read more

Ozy Media Inc. was sued by an investor over its co-founder’s impersonation of a YouTube executive during a conference call with Goldman Sachs Group Inc. executives about a potential investment.
Read more

Baton Rouge police have arrested a suspect in connection with the death of his 2-year-old stepdaughter whose remains were discovered on Sunday.
Read more

In an interview with ABC, Joe Biden said nobody could have anticipated the speed of the Taliban takeover.
Read more

Workers at Amazon's Bessemer, Ala., warehouse have voted not to unionize, a major victory for the e-commerce giant but not the end of the fight for labor organizers.
Read more

Commonwealth and European medallist Ashley McKenzie is named in a six-strong GB judo team for the Tokyo Olympics.
Read more

The United States on Sunday strongly condemned what it said was Russia's detention at the weekend of the deputy leader of the main representative body of Crimean Tatars and at least 45 other members of the ethnic group.
Read more

A Look At Cybersecurity, Taxes, And The Markets (Podcast)

Rep. Matt Gaetz (R-Fla.) and a group of other House Republicans on Friday introduced legislation to end funding for an arm of the U.S. Postal Service (USPS) that carries out online surveillance.
Read more

The rocky road ahead for the House surface bill

Official figures show inflation in the U.K. rising to its highest level in nearly three years because of increases in the prices of food and motor fuel
Read more

Florida's largest school district approved mask mandates late Wednesday in defiance of Florida Gov. Ron DeSantis's (R) order that parents should be given an option to opt their kids out of wearing face coverings in classr...
Read more

On The Money: IRS plans to extend tax filing...

Welcome back to On The Money, where we're sending love to the AAPI community on ...
Read more

Drugmaker Johnson & Johnson will assume direct oversight responsibilities for an Emergent BioSolutions facility in Baltimore, Md. that was blamed for ruining as many as 15 million COVID-19 vaccine doses last week....
Read more

More than 22,000 lives could have been spared in Texas and Florida, states where governors have spoken out against mask and vaccine mandates, if they had vaccinated three-quarters of their adult populations.
Read more

Trevor Noah opens Grammys saying he's 'hoping this is about what 2021...