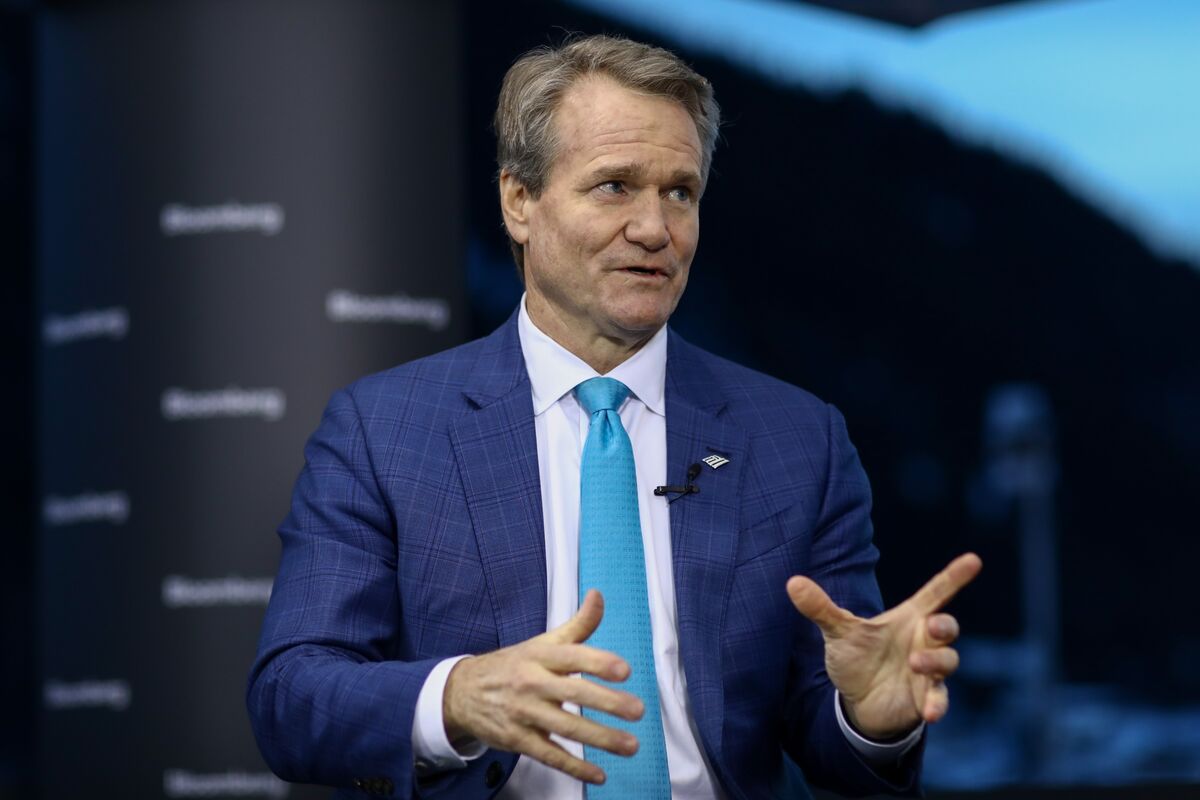 Bank of America Corp. is confident in its growth prospects even as competition intensifies from fintechs including

I respect every competitor, I dont fear any competitor, Bank of America Chief Executive Officer Brian Moynihan said in an interview Monday on Bloomberg Television. We study all competitor moves, whether its the fintech disruptors or major players.

WATCH: BofA CEO Brian Moynihan says he is not concerned about competition from fintechs.

struck fear on Wall Street, which has been urging regulators to halt efforts by retailers and startups to offer core banking products to millions of consumers.

Bank of America has an advantage because of its scale, Moynihan said, citing the companys 40 million digital customers.

What makes us unique is we serve all segments of clients, from mass-market consumers to wealthy individuals and large businesses, he said.

said the company is prepared for intensifying competition.

With assistance by Jacqueline Fabozzi Sri Lanka banks on vaccination to see it through...

When a 51-year-old tutor suffered a heart attack in Sri Lanka's capital, his friends and family were faced with a difficult problem
Read more

Fox News reported on a diversity training in which an Oregon teacher who suggested that colleagues needed to "evolve" with so-called "anti-racist" ideas or "dissolve."
Read more

The (Often) Cheapest Watch on Amazon Has a Story...

It’s a Casio. And an unexpected little gem of modernist design.
Read more

Police to record crimes motivated by sex or gender...

Ministers agreed to the change on "an experimental basis" after calls for misogyny to be made a hate crime.
Read more

Birmingham Phoenix move to the top of the men's Hundred table after a comfortable win over rivals Trent Rockets at Trent Bridge.
Read more

Cattle and sustainability do mix — here’s why

The American beef industry is sustainable - but the current lack of dialogue and understanding between cattle producers and policymakers is not.
Read more

The top Democrat in the Virginia House of Delegates conceded on Friday the party had lost its majority in the lower chamber to Republicans in Tuesday's election.In a ...
Read more

Greenhouse gas emissions from the electric sector have rebounded back to their pre-pandemic levels, according to new research.An analysis by the London-based climate think tank ...
Read more

Questions women should ask before a hysterectomy

600,000 women in the U.S. undergo a hysterectomy each year, making it the second most common surgical procedure for women. CBS News chief medical correspondent Dr. Jon LaPook spoke with gynecologic surgeon Dr. Lori Warren about some of the less-invasive surgi…
Read more

The Commons Speaker wants to know how Wayne Couzens was deemed suitable to be on duty at parliament.
Read more

China knocks Yellen over call for ‘unified front’ between...

China on Tuesday knocked Treasury Secretary Janet Yellen's call for the U.S. and Europe to come together as a "unified front" against Chinese human rights abuses and "unfair economic practices," according to ...
Read more

Covid in Scotland: Indoor visiting to resume as rules...

First Minister Nicola Sturgeon said most of the country will move to level two restrictions from 17 May.
Read more

The 15-year-old died at the scene of the crash in Lanarkshire on Saturday night.
Read more

President Biden and members of Congress met with George Floyd’s family on the anniversary of his death. Weijia Jiang shares more.
Read more

President Biden’s support on college campuses has taken a dive along with his approval numbers after video and photos surfaced of Haitian migrants in Del Rio, Texas.
Read more

There's a Walmart restock today for the PS5 Disc, PS5 Digital and Xbox Series X. Here's when and where to get the consoles.
Read more

Metro-Goldwyn-Mayer and Annapurna Pictures will make “Addams Family 2” available for at-home rental the same day it opens in theaters, according to a person familiar with the plans, the latest sign that Covid-19 continues to upend movie studios’ plans.
Read more

State rips Cruz over holds ahead of key Russian...

Kabul fell — and this ambassador was thrust into...

The inaugural episode of Global Insider features Linda Thomas-Greenfield, the U.S. ambassador to the United Nations, in the days after the Taliban’s takeover of Kabul.
Read more

Kentucky looking to cause LSU problems — and not...

Two weeks ago, Kentucky was hanging onto a lead at South Carolina, looking for their second conference win of the season. Now, fast forward three weeks later, and the Wildcats are taking on the visiting LSU Tigers for an opportunity to be 4-0 in the SEC. They…
Read more

The program is being funded by the Bay Area Air Quality Management District and is willing to pay people up to $9,500 to trade in their vehicles.
Read more

Oscar Isaac has long been rumored to play the lead in Marvel's Moon Knight series – here's more proof that it's going ahead.
Read more

Sergio Aguero will join Barcelona on a two-year contract when his Manchester City contract expires at the end of June.
Read more

Stock indexes around the world jumped on Tuesday as U.S. technology shares extended recent gains and earnings reports were upbeat, while the 10-year U.S. Treasury yield rose to its highest in more than four months.
Read more

LA deputies charged with lying to cover up on-duty...

Philadelphia 76ers star Ben Simmons was one of the focal points of the criticism the team received after losing Game 7 of the Eastern Conference Semifinals Sunday night to the Atlanta Hawks.
Read more

A key House subcommittee on Monday cleared a spending bill for the Department of Health and Human Services without including a decades-old rider prohibiting funding for abortions, kicking off what is likely to be a ...
Read more

What Republicans at the state and national level are calling efforts to force transparency are, in fact, increasingly transparent.
Read more

Boris Johnson: Why mining gaffe will linger after Scottish...

Boris Johnson put his foot in it by joking that Margaret Thatcher gave the UK a "big early start" in the shift away from coal.
Read more

Although opponents of Postmaster General Louis DeJoy hope that Thursday's board confirmation hearing could lead to his ouster, the embattled USPS chief appears safe.
Read more

A school undergoing construction work has collapsed in the Belgian city of Antwerp, killing five workers and injuring nine others, according to local authorities
Read more

Prosecutors and the defense for a former Olympic athlete are close to reaching a plea deal, multiple news outlets ...
Read more

Hometown International Inc., the deli in Paulsboro, New Jersey, that is a $100 million public company for very perplexing reasons, had another good day yesterday. After trading 27,381 shares, total, from the beginning of 2021 until last Thursday, an average …
Read more

Documents released by the Department of Health and Human Services (HHS) on Tuesday revealed that top health officials were aware of complaints about a doctor sexually abusing Native American boys several years before the...
Read more

Egypt bets on ancient finds to pull tourism out...

As some European countries re-open to international tourists, Egypt has already been trying for months to attract them to its archaeological sites and museums
Read more

Siblings seek to honor dad by adding his made-up...

A brother and sister are trying to get "orbisculate" added to the dictionary to honor their late father, who made up the word.
Read more

The aerial pictures show the Ever Ace coming in to dock at Felixstowe in Suffolk.
Read more

One killed, five wounded in Easter shooting at Alabama...

One person was killed and several others were wounded in Alabama on Sunday night after an argument at a park erupted in gun fire."At the time the shooting occurred, hundreds of people were gathered at the park cele...
Read more

Myanmar coup: What protesters can learn from the ‘1988...

More than a dozen states have dropped their objections to a controversial bankruptcy plan for opioid-maker Purdue Pharma, clearing the way for its adoption.According to court documents filed by a...
Read more

A federal judicial panel on Friday granted motions to consolidate pretrial proceedings for more than 110 federal lawsuits against CPAP-maker Philips, and for at least 16 actions over Johnson & Johnson’s Neutrogena- and Aveeno-brand aerosol sunscreens.
Read more

The plan to roll out Merck & Co's (MRK.N) promising antiviral pill to treat COVID-19 risks repeating the inequities of vaccine distribution, potentially leaving the nations with the greates…
Read more

Primary care staff in Bristol say they have never seen pressure like this before - and winter hasn't even started yet.
Read more

Freaking Out Over Rates (Podcast)

The Xiaomi Mi 11 Ultra at Rs 69,999 is one of the top smartphones in India with best in class cameras, display, design and battery.
Read more

The authorities have also made an urgent appeal for blood donations in the capital Freetown.
Read more

A Florida man was in jail after he allegedly threw a 2-month-old boy toward deputies at the end the of a vehicle chase, authorities said.
Read more

India vs New Zealand WTC final: How to watch...

The biggest event in the Test match cricket calendar, the ICC World Test Championship Final, is scheduled for June 18-22, with June 23 set aside as the Reserve Day. Here's how you can watch the final in India.
Read more

An estimated 43 migrants drowned while attempting to cross the Mediterranean sea Saturday, according to the Tunisian division of the International Federation of Red Cross and Red Crescent Societies. ...
Read more

Clinton thrilled to have Joan Allen recording her new...

Hillary Clinton says she "couldn't be more excited" to have actor Joan Allen recording the audio version of her forthcoming political thriller.The "Nixon" star will serve as narrator for "State of Terror's" audiobo...
Read more

The European Central Bank will be one of the last major central banks to raise interest rates after the COVID-19 pandemic, according a Reuters poll of economists, who still say the risk is a rate rise comes sooner than their current prediction of 2024.
Read more

Scottish stars Paolo Nutini and Lewis Capaldi will lead the line-up at next year's festival at Glasgow Green.
Read more

The Garmin Forerunner 55 is the best watch for...

If you run, you are a runner – and the right watch can help you enjoy your new hobby and achieve your early goals.
Read more

Aides to former President Trump last year reportedly drafted an order that would have allowed him to invoke the Insurrection Act amid the ongoing demonstrations and civil unrest in the wake of the police killing of George Floyd.
Read more

FOX Sports North compiles the top photographs from the past week of Minnesota sports.
Read more

St. Louis Blues center Jacob de la Rose will be a healthy scratch on Wednesday as Dakota Joshua remains in the lineup as the fourth-line center.
Read more