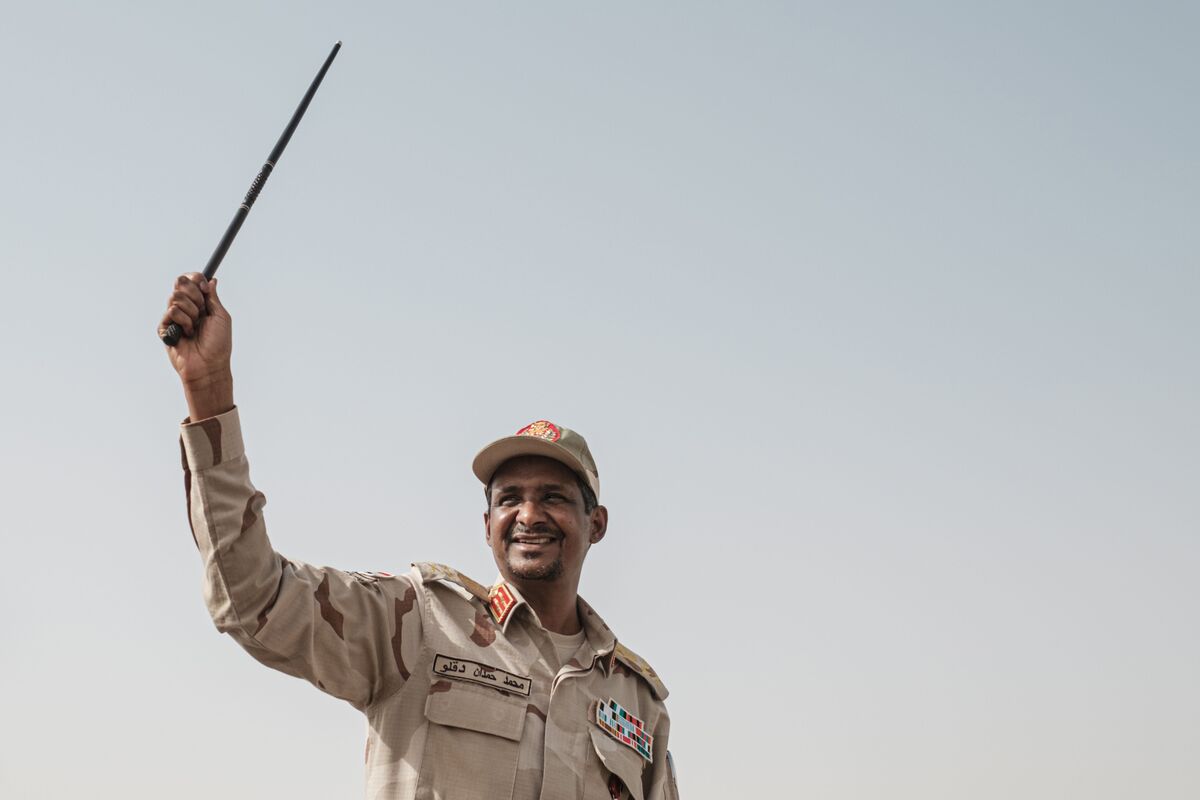 Sudan dispatched a research team to revitalize a network of gold mines in Darfur previously linked to the family of the countrys most powerful militia leader.

The team from the General Authority for Geological Research seeks to resume production at the site in the Jebel Amer region of North Darfur and increase it over the next three months, the Mining Ministry said in a statement.

The mines were recently handed over to Sudans government after being held since 2016 by Al Gunade, a construction and trading firm owned by members of militia chief Mohamed Hamdans family.

A former enforcer for Sudans veteran dictator Omar al-Bashir, Hamdan joined the 2019 coup against him and now has a senior role in Sudans transitional government.

The handover is a move toward formalizing the gold-mining sector that cash-strapped Sudan has touted as an alternative to oil. The country lost three-quarters of its crude reserves when South Sudan seceded in 2011. Kayleigh McEnany sounds off on media’s ‘softball questions for...

Former Fox News contributor Stacey Dash opened up about her drug addiction in an interview on "The Dr. Oz Show."
Read more

No one has been found in the rubble since Friday morning.
Read more

Denzel Dumfries: From Aruba and amateur football to starring...

Denzel Dumfries has gone from playing for Aruba as an amateur to starring for the Netherlands at Euro 2020.
Read more

Grants for people on low pay in Wales and told to self-isolate will increase by £250 from this weekend.
Read more

On his 100th day in office, the president rallies supporters on a trip to Georgia.
Read more

The MPs' standards watchdog is looking into whether costs of the trip have been correctly declared.
Read more

Covid vaccine passports in Wales: Are you for or...

As Scotland introduces vaccine passports and England scraps its plans, what should Wales do?
Read more

Live from New York, this is news for the new media. Watch global news and go deeper with original shows on business, technology, politics, and culture.
Read more

The Federal Aviation Administration has received roughly 2,500 reports of unruly passenger behavior since the beginning of the year.
Read more

Max Verstappen rejects Lewis Hamilton's suggestion that he could be feeling the pressure of their title fight.
Read more

The Apple AirPods 3 have apparently been revealed in more leaked photos.
Read more

Northern Irish police on Wednesday arresed two more men in relation to the 2019 killing of journalist Lyra McKee in Londonderry, whose death caused outrage in the British-run province.
Read more

As Democrats approach a crucial stretch to pass a new voting rights bill, here's a point to remember that most people forget: White people -- not just people of color -- have been some of the biggest victims of voter suppression tactics.
Read more

Mint Mobile has just launched a new free trial - try one of the best prepaid phone carriers around this week.
Read more

Former President Donald Trump sent billions in federal aid in a bid to win over America's farmers -- but now they're all for President Joe Biden's $1.2 trillion infrastructure package, in hopes it will mean fixing roads and bridges critical to the delivery of…
Read more

We're getting to crunch time – can Hamilton scrape back a lead? Here's how to watch the 2021 Mexican GP - and for FREE - with an F1 live stream anywhere on Earth.
Read more

President Joe Biden on Tuesday announced his nominees to serve as ambassadors to Israel, Mexico, NATO and several other posts, including Capt. Chesley "Sully" Sullenberger III to represent the United States on an international civil aviation safety board.
Read more

The Wolf Tree and the World Wide Web

In this essay from 'Finding the Mother Tree,' Suzanne Simard reflects on parenting, climate change, and the networks at the heart of the forest.
Read more

EXPLAINER: Why some schools in Canada have unmarked graves

The ROG Zephyrus G14 Alan Walker Special Edition comes with a special packaging box that can be converted into a remix sampler.
Read more

Marijuana use did not climb following legalization in states:...

Marijuana use may be more legal across the country, but that hasn't led to a rise in pot users, a study found.
Read more

The subject of Premier League strike partnerships is discussed by Gary Lineker, Alan Shearer and Micah Richards in the latest Match of The Day: Top 10 podcast.
Read more

Focus shifts to EPA on methane regulation after Biden...

President Biden’s restoration of Obama-era rules on methane emissions is shifting all attention to the Environmental Protection Agency (EPA) as regulators indicate they plan to clamp down further on the potent greenhouse gas.Biden this past week...
Read more

A new patch (which is still in preview) also introduces the news widget to the taskbar.
Read more

A North Carolina school system is under fire and apologizing after a school shared a collection of mock tweets from fourth-graders that contained racist remarks as part of a Civil War assignment, ...
Read more

Homeland Security Secretary Alejandro Mayorkas warned Friday that "people will see lines" at airports over Memorial Day weekend, but added that the Transportation Security Administration (TSA) is "ready" for the res...
Read more

Inside a Muslim ballet school for girls

A ballet academy is trying to make dance accessible to Muslim girls by moving to poetry instead of music.
Read more

Waters: Fauci ‘was being bullied’ by Jordan during hearing

The Chinese government says the issue at the Taishan facility is "common" and did not cause a leak.
Read more

Biden calls for dialogue with Russia amid raft of...

President Biden on Thursday said he is not seeking a "cycle of escalation and conflict with Russia" and called for dialogue between Washington and Moscow after his administration unveiled a new raft of sanctions intended...
Read more

Priti Patel on government plans for immigration and security

Security is “at the very heart” of the government’s plan for immigration, the home secretary has said.
Read more

Chris Christie Touts ‘Talent’ to Be President, Undaunted by...

Emmanuel and Ebenezer Boakye say growing up in a single-parent family made them determined to thrive.
Read more

The star's first song since leaving Little Mix is based around a hefty sample from Bad Boys For Life.
Read more

Cardinal, 9 others on trial at Vatican in money...

A trial is slated to begin on Tuesday within the Vatican City’s imposing walls of 10 defendants, including a once-powerful cardinal, for roles in the allegedly criminal management of the Holy See’s portfolio of assets
Read more

Britain's health minister Sajid Javid said on Sunday he expected to receive advice imminently on whether the government can broaden a booster jab programme to try to tackle the emergence of the newly identified Omicron coronavirus variant.
Read more

From the National Book Awards to the tongue-in-cheek Ig Nobel Prizes, "Sunday Morning" takes a look at some notable events of the week ahead. Charles Osgood reports.
Read more

The Problem Solvers Caucus of House moderates on Tuesday backed the infrastructure framework that President Biden and a bipartisan group of senators announced last month, and urged the House to hold a standalone vote on l...
Read more

Why iPhone SE 3 is very unlikely to appear...

Apple isn’t ready to announce an iPhone SE 3 yet, so don’t get your hopes up for one alongside the iPad Pro 2021.
Read more

President Biden on Friday will mark a new milestone in the fight against the coronavirus - 300 million coronavirus vaccine doses administered during his first 150 days in office."Thanks to the President's whole-of-...
Read more

New York City officials on Monday said they do not immediately plan to reimpose an indoor mask requirement due to the omicron variant, but are "strongly" recommending people wear masks when indoors in public spaces.David Chokshi, commissioner of the...
Read more

The U.S. has long avoided punishing the Russian leader in the misplaced hopes of cooperating with a regime that only seeks instability.
Read more

Activist investor Elliott Investment Management has built a position in UDG Healthcare Plc, which has drawn shareholder criticism over the terms of its proposed takeover by buyout firm Clayton Dubilier & Rice.
Read more

Mark McCloskey announces run for US Senate in Missouri

Mark McCloskey, the St. Louis homeowner who catapulted into national headlines last summer after video surfaced on social media showing him and his wife, Patricia, pointing guns at demonstrators, is running as a Republican for US Senate in Missouri, he announ…
Read more

Japan searches for 24 unaccounted for in mudslide; 4...

Rescue workers are digging through sludge and debris looking for more than 20 people who may be trapped after mud, trees and rocks ripped with a roar through a Japanese seaside resort
Read more

The Biden ‘fall of Saigon’ media narrative in Afghanistan...

Team Biden is getting hit from the right, the left and everywhere in between for its miscalculation that the Taliban could be reasoned with.
Read more

Wild Card loss could be Boone’s last game as...

$324 million. That’s the amount of money that Yankees general manager Brian Cashman paid star pitcher Gerrit Cole in 2019 to wear pinstripes for the rest of his career. Cole was supposed to be the next Roger Clemens, Mike Mussina or CC Sabathia, a bona fide a…
Read more

House Democrats on Thursday released a report alleging that 14 top pharmaceutical companies have spent more on stock buybacks, dividends to investors, and executive compensation than on research and development in recent years, as part of a push by lawmakers …
Read more

Fireworks boomed as the visitors at Shanghai Disneyland waited for their COVID-19 test results, surrounded by healthcare workers dressed from head to toe in white protective suits
Read more

A U.S. government report on UFOs could not find an explanation for 143 sightings of unidentified aerial phenomena. The report says there's no evidence the objects came from outer space or a foreign adversary. David Martin reports.
Read more

Sima Kotecha was harassed while preparing for a broadcast in Leicester city centre.
Read more

But any extension of the vaccination rollout next month will first depend on a recommendation from experts.
Read more

We are eager to support a promising new proposal that could be the key to unlocking investment in cornerstone community projects.
Read more

The Big 12 is no longer considered a prolific passing league, replaced for now by a wave of ground attacks that are producing plenty of individual stars.
Read more

US veterans are disappointed with how the war in...

As the United States withdraws from Afghanistan, the world has watched as the Taliban has swiftly taken back control of the country, entering Kabul on Sunday as former Afghan President Ashraf Ghani fled the country and the United States evacuated its embassy.
Read more

Frat pledge “left alone on the couch to die”...

Stone Foltz​ was blindfolded, taken into a basement and forced to drink to an entire bottle of alcohol, according to the lawsuit.
Read more